Pinterest (NYSE:PINS) is one of few companies whose shares we purchased for the long term. Since the publication of our latest article on Pinterest, its stock appreciated by more than 25%, and thanks to the company’s unique market positioning, it has all the chances to continue to grow in the upcoming months. Pivoting to the eCommerce business model and giving its advertisers an ability to launch targeted conversion ads was the right decision for the management to do, and the company’s impressive Q2 results show that Pinterest is moving in the right direction.

While the stock trades at a Price-to-Sales ratio of 16x, we believe that the business is not overvalued, since Pinterest is a growth stock with lots of upside. Thanks to an impressive growth of MAUs in Q2 we believe that Pinterest’s growth story is not over, and for that reason, we continue to hold a long position in the company.

It’s All About Growth

Despite covering short ideas most of the time, we decided to write a bullish article on Pinterest in early July, as we view the company’s stock as an attractive growth play with lots of upside. Since the publication of our latest article, the stock appreciated by more than 25%, and there’s every reason to believe that Pinterest’s growth story is far from over. By being a visual search engine for its users, Pinterest has a unique market positioning and a lot of room for growth. At the same time, it is not exposed to political headwinds like other social media platforms and it has a highly monetizable niche audience, which gives the company an edge in the digital advertising industry.

By giving the opportunity to pin, collect and share image posts that lead to various niche websites, Pinterest is able to better analyze the behavior of its users, find out more about their interests, and give its paid customers effective advertising tools to increase their sales. After adding the ability to upload posts to a catalog and adding a Verified Merchant status to stores that are using Pinterest for advertising, the company saw the improvement of conversion campaigns that were launched on the platform.

By pivoting to the eCommerce advertising business model, Pinterest was able to accelerate its growth, and in Q2, its revenues were up 4.3% Y/Y to $272.49 million. At the same time, the company had 416 million monthly active users at the end of Q2, which is an increase of 39% Y/Y. 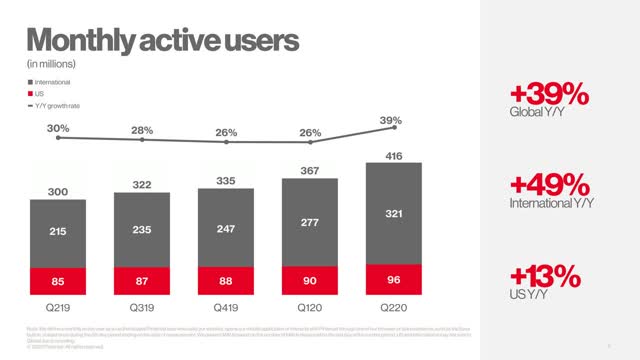 Going forward, there are several catalysts which will help Pinterest to expand further. Recently, the company launched an automating bid offering for its cost-per-click campaigns, which make it easier for advertisers to set up their campaigns. Automating bidding also helps to drive more clicks at a lower price and helps sellers to decrease their customer acquisition cost, making Pinterest one of their major marketplaces for running ads. After launching the offering a few months ago, automatic bidding quickly gained popularity, and at the end of Q2, accounted for 80% of CPC revenues.

Another reason to be bullish on Pinterest is its balance sheet. At the end of June, the company had $863 million in cash, $839 million in marketable securities, no debt, and only $151 million in operating leases. While Pinterest currently burns cash, it has enough financial flexibility to continue to lose money and drive growth until it becomes profitable. In Q2, the company’s EBITDA loss was only $33.9 million, much better in comparison to the consensus of $82.7 million. While the stock trades at a P/S ratio of over 16x, it still has lots of upside, since the growth story is not over. Currently, Pinterest has only one Sell recommendation among 26 recommendations, which shows that the Street is not bearish on the stock despite its premium valuation.

The biggest downside of Pinterest is that it has a low average revenue per user. In Q2, the company’s US ARPU was $2.50, while international ARPU was only $0.14. When compared to Facebook’s (FB) global ARPU of $8.52, we can see that Pinterest needs to improve its operating metrics to be able to successfully compete with its bigger peers. However, this also shows that it’s possible to drive ARPUs higher and Pinterest has more room for growth. As the advertising market starts to recover from its March-April lows, we should see an improvement of ARPUs in the second half of the year. In the latest conference call, the management of Pinterest said that revenues in July alone are up ~50% Y/Y, and in Q3, they’re going to be up ~30-35% Y/Y.

By providing efficient advertising tools for digital sellers and growing its platform at the same time, Pinterest will be able to continue to expand around the globe. While the company is not profitable yet, it has enough resources to stay afloat for a long time, increase its user base, and scale its advertising efforts. For that reason, we continue to own shares of Pinterest and have no plans to unwind our position in the foreseeable future. We also think that the stock is not overvalued, and new investors still can benefit from the upcoming growth if they start to accumulate shares in the company on every major dip to have a better margin of safety.

Bears of Wall Street is a community of traders and financial analysts, who take a pragmatic approach to valuing companies. The majority of our articles have bearish sentiment and reflect our short stance on the market. Our investments include short sales of common stock. If you liked our writing style and our view on the market – don’t forget to subscribe. If you have questions – feel free to ask them via direct messaging or through the comment section.

Disclosure: I am/we are long PINS. I wrote this article myself, and it expresses my own opinions. I am not receiving compensation for it (other than from Seeking Alpha). I have no business relationship with any company whose stock is mentioned in this article.