With gold and silver in need of a breather, metal bulls would be wise to take a look at bitcoin (BTC-USD) with some of their profits. While I have my doubts that bitcoin will ultimately replace traditional inflation hedges like gold, it is one of the most interesting trades one can make at this juncture. Though I believe it's a highly speculative asset, to ignore it completely as an investment will prove short-sighted in my estimation.

Overall, my investment thesis on bitcoin is pretty straightforward. In a world where real yields on treasuries are negative, investors need other monetary instruments to find a return. While I’m of the opinion precious metals such as gold and silver are as close to a slam dunk as you can get to hedge against inflation, cryptocurrencies like bitcoin provide the potential for similar wealth protection with possibly even more explosive upside than metal. Though my portfolio weighting is very heavy to precious metals tickers and miners, I think bitcoin is the better buy right now given the recent overbought conditions after making fresh highs in the metal space. Beyond that, there are some recent catalysts that I see as highly bullish for bitcoin moving forward.

It's been well-documented that legendary trader Paul Tudor Jones is now a bitcoin bull. Grayscale Investments continues to add assets under management at an aggressive pace. 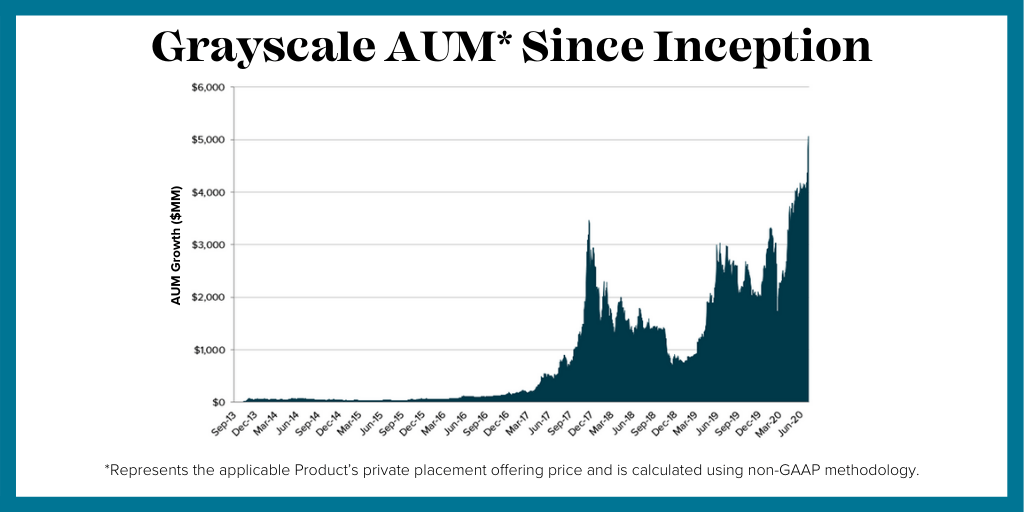 Though I gave neutral coverage to the Grayscale Bitcoin Investment Trust (OTC:GBTC) back in December of last year, I do view Grayscale as an important gauge of sentiment from higher net worth investors. Judging from the $217 million inflow into Grayscale following the launch of a new national ad campaign, it's safe to say Grayscale's feverish pace of coin acquisition is likely to continue. Per Tokenpost:

And it isn't just Grayscale putting bitcoin on the balance sheet. I’m of the opinion that the MicroStrategy (MSTR) news is a big deal. In my opinion, a publicly traded company moving any cash into cryptocurrency is an important development as it shows acceptance of holding unconventional monetary assets in reserve. That MicroStrategy put a quarter of a billion dollars into bitcoin is more than just an important development, it's a stunning rejection of the reserve currency. Said company CEO Michael Saylor:

“This investment reflects our belief that Bitcoin, as the world’s most widely-adopted cryptocurrency, is a dependable store of value and an attractive investment asset with more long-term appreciation potential than holding cash."

When you consider how large of a percentage of MicroStrategy's cash and investments this investment is, you begin to see how much conviction the company's leadership has in this decision. This is not a small bet.

Though traders who move in and out of positions more frequently than I typically do will look to things like daily and 4-hour charts, I like looking at the monthly chart on bitcoin. Day trading crypto is probably fun and highly lucrative for talented traders. The problem is most of us are not day traders and even those who are can easily find themselves on the losing end of a transaction. That's why I like the monthly chart for bitcoin. It allows me to take the position and not worry too much about the daily or hourly moves. Though I've never claimed to be an above-average technical analyst, it's hard not to see that bitcoin has produced some significant prints in the last few weeks. 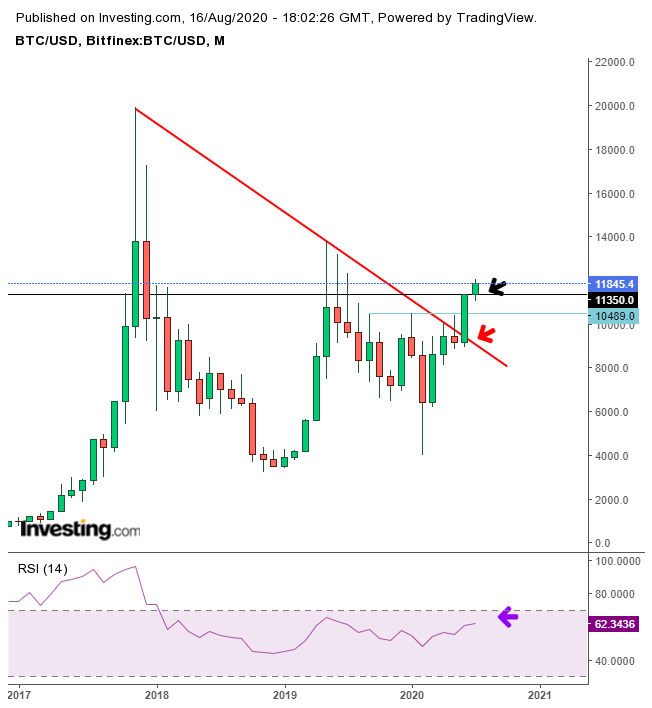 I see three important things telling me that bitcoin is ready to start a long-term run. First, the red arrow and red line show that bitcoin convincingly broke out of the multiyear downtrend that it had been in since the 2017-high. The black arrow and line show July as the highest monthly closing price since the 2017-high - maybe surprisingly, this also makes July the second-highest monthly close in bitcoin ever. Lastly, the purple arrow shows an RSI with plenty of room to run. As a longer term swing trader and investor, Bitcoin looks fantastic to me right here. Gold, on the other hand, looks positioned for a pullback. 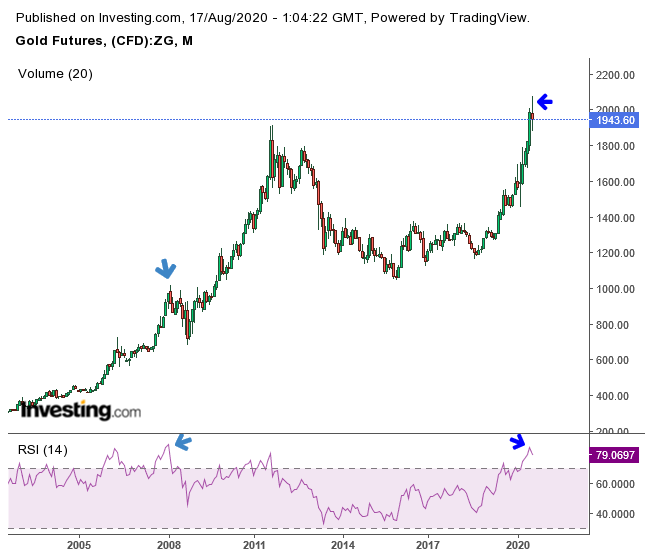 Looking at the same monthly time frame, we can see at July close the famed yellow metal was at its most overbought level since early 2008. What came after that 2008 run was a 33% pullback over the next several months. We know the rest. After the pullback, gold rocketed over $1,900/oz in 2011. While I highly doubt gold's pullback will be that severe this time around, never say never. Regardless, the technical setup today looks to favor bitcoin for inflation hedge seekers.

One of the things that made the 2017 bitcoin run such an aggressive bubble was the amount of dumb money that piled into the trade. Bitcoin truly went viral as it garnered mentions from mainstream news outlets and prime time television shows. By Thanksgiving, just about everyone had heard of it even if they didn't understand it. Google Trends data shows just how intense the search interest was in bitcoin during that time. It also shows how brief bitcoin's time in the limelight was in the grand scheme of things. 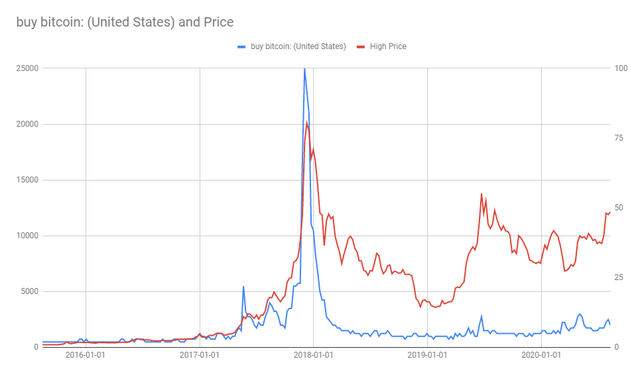 When we overlay a simple google search phrase like "buy bitcoin" with price, we can see a correlation to spikes in the prices with spikes in search interest. Despite those spikes in interest, they are nowhere close to the spikes we saw during the 2017 run. There is something to consider for full context when looking at this data. Far more entities offer exposure to bitcoin now than in 2017. It's much easier to get it. Because of this, "buy bitcoin" as a search might not be as necessary now as it was 3 years ago.

Having said that, I think we can still find some interesting information from the search data. If we shorten our time horizon in the search data from 5 years to just 12 months, we can get an idea of how strong the interest in Bitcoin is right now. That data seems to suggest the interest in buying Bitcoin has been strong over the last five months when compared to the second half of 2019. 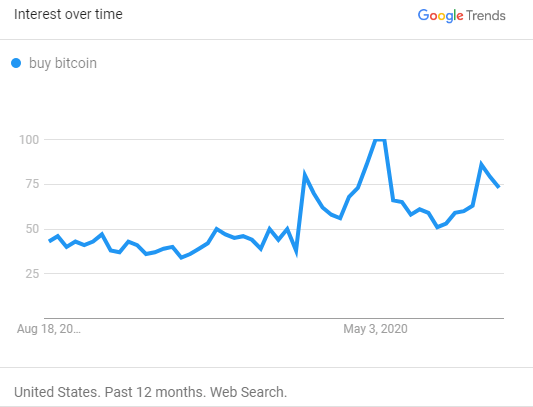 The wallet creation information from Blockchain.com would seem to corroborate this interest. As of article submission, Blockchain.com shows 52.6 million blockchain wallets. This is up greater than 13% from 46.5 million in mid-March during the 52-week lows. 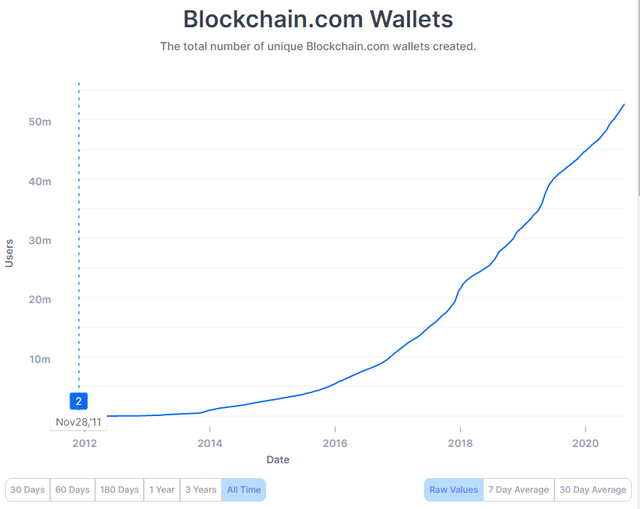 When I look at these charts and I try to tie it all together, I see greater adoption of bitcoin as an asset. I see a more sustained rise in consumer interest over these last few months. Compared to what happened in late 2017, this recent move up in interest indices feels much less like a FOMO trade this time around. This notion holds true in my personal experience as the dumb money people who I saw and heard talking about bitcoin in November and December of 2017 aren't talking about it now. The point is, I believe the current rise is being driven by smarter investors in 2020. I think this bodes well for the sustainability of a rise to new highs.

Though I'm bullish bitcoin now and longer term, there is a chance bitcoin could backtest some support levels before moving up in a significant manner. Because of the extreme nature of bitcoin, it is not an asset that I'd recommend buying if daily price action is a concern or if risk tolerance is low. My thesis that bitcoin can act as an inflation hedge could also simply prove incorrect.

I view a very specific alignment of key events happening at the same time; all of which seem to be in bitcoin's favor. The Fed is "committed" to ramping up inflation and Jerome Powell isn't even thinking about raising rates. Bitcoin's biggest inflation hedge competitor just printed a new nominal all-time high and is very due for a pullback. Meanwhile, bitcoin has achieved a technical breakout of a multi-year downtrend. Corporate interest in the cryptocurrency is clearly picking up steam. Finally, the recent breakout does not have the hallmark of a FOMO trade, in my opinion. I think there is significant room for bitcoin to run and I wouldn't be surprised to see the cryptocurrency take out its all-time high in the next 6-12 months.

Additional disclosure: I am not a professional. Do your own research.