The airline stocks haven't rallied in months, but the sector continues to see improvements worthy of higher stock prices down the road. Southwest Airlines (NYSE:LUV) is the latest company to report better than expected cash burn numbers despite a tough flying environment. My investment thesis remains bullish on the airline as the industry is headed to cash flow breakeven numbers.

Despite a lot of protests by airline CEOs, the industry is quickly heading toward cash flow breakeven numbers. In fact, some airlines have already reached those levels when accounting for the Payroll Support Program funds from the U.S. Treasury.

When last discussing Southwest Airlines, the industry was happy to see daily passenger traffic headed towards 600K. Passenger growth has slowed in the last month, but the daily TSA traffic levels have flatlined up around 800K per prime weekend days, providing enough of a revenue boost to eliminate a large portion of the daily cash burn.

The airline was forecasting daily cash burn targets in the $20 million to $25 million range back in June, while the airline just predicted July fell to ~$17 million. In essence, the month after Southwest Airlines was proclaiming up to a $775 million cash burn level for the month, the airline only burned $527 million.

The coronavirus environment has made predicting financial targets in the airline sector very difficult, but investors need to realize that airlines such as Southwest and Delta Air Lines (DAL) constantly provide the most dire outcomes. The airlines are relatively close to breakeven, with traffic only back to 30% of 2019 levels.

Another prime example of this issue is the guidance from Southwest of the Q3 daily cash burn rate only dipping to $20 million. Yes, somehow the airline is predicting the rest of the quarter sees higher burn rates than July despite better passenger trends in August and a better internal forecast for September.

The target is down from the previous Q3 estimate of $23 million, but our estimate suggests the daily cash burn declines to only $15 million for the rest of the quarter. The numbers from Southwest Airlines back the improving daily cash burn trend:

The airline had been looking at moving capacity to only down 20% from 2019 levels, but the slower rebound in traffic has Southwest Airline cutting back on capacity expansions. August will be a tough month as capacity got ahead of actual demand when virus counts rose in the Summer months.

The key to these numbers is the September targets of improving revenue in the month combined with lower capacity. The airline will have fewer airplane operating expenses such as fuel with the fewer flights. At the least, one should expect the September number alone to easily dip below the $17 million forecast for July.

Another big part of the story is that Southwest Airlines continues targeting load factors below 50%. The airline isn't even focused on maximizing profit levels and reducing daily cash burn. The improvement targets are all solely made on better operations.

To top it all off, Southwest Airlines has gotten $2.3 billion in PSP grants, which covers $12.7 million in daily employee costs. The airline is technically very close to cash flow breakeven and, in Q2, had positive cash flows from operations of nearly $900 million. Not so dire for a company supposedly in dire straits. 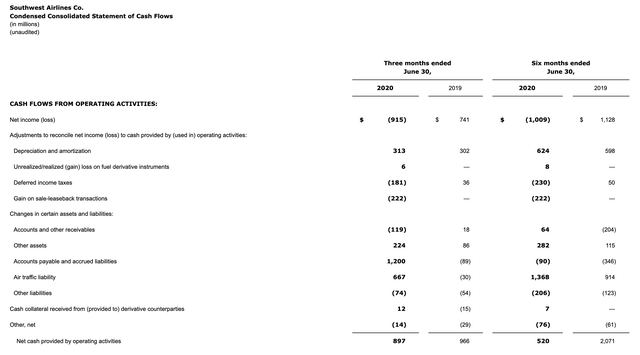 With my view that September daily cash burn based on the airline's targets has to dip below $15 million, Southwest Airlines doesn't need the $15.2 billion in cash on the balance sheet as of August 18. The airline repaying debt will be a catalyst for the stock.

Southwest Airlines has been stuck trading between $30 and $35 since early June. The airline now has several catalysts for higher stock prices, considering the stock trading at nearly $60 pre-virus.

The main catalyst is an improvement in the new virus cases that allows for freer domestic travel. Whether a virus burnout (U.S. cases are collapsing) or an approved vaccine, the opportunity exists for travel to return more to normal levels.

Even without something that triggers New York Governor Andrew Cuomo to relax quarantine restrictions or a relaxing of International travel restrictions, a big catalyst for the airline stocks is the repayment of debt. Southwest Airlines clearly doesn't need this much cash with the ability to quickly approach cash flow breakeven here.

The airline not taking part in the Loan Program from the U.S. Treasury is a big step in that direction. Though, the company used the 8-K to discuss unencumbered assets of ~$12 billion versus talking about repaying debt still offering this next step as a catalyst.

The key investor takeaway is that Southwest Airlines unquestionably has the cash to survive and thrive when travel demand rebounds whether this year or 2021. Analysts had the airline on pace to generate $5-6 in EPS, suggesting a normalized $4.50-5.50 EPS target with outstanding shares up about 9% to 590 million.

Investors should use the ongoing weakness to own Southwest Airlines.

If you'd like to learn more about how to best position yourself for a rally in beaten down stocks due to COVID-19, consider joining Out Fox The Street.

The service offers a model portfolio, daily updates, trade alerts and real-time chat. Sign up now for access to legacy pricing available to the first 25 subscribers.

Stone Fox Capital
40.47K Followers
Author of Out Fox The Street
Out Fox the market with misunderstood, high reward opportunities
Stone Fox Capital Advisors, LLC is a registered investment advisor founded in 2010. Mark Holder graduated from the University of Tulsa with a double major in accounting & finance. Mark has his Series 65 and is also a CPA.