Coca-Cola Company (NYSE:KO) has created one of the strongest beverage brand portfolios globally. This in combination with the company's unique franchise business model makes KO one of the most profitable consumer staple companies ever.

By divesting its bottling operations, KO is also moving up on the value-added chain and better positioning itself to reinvest more in its key brands and make a strong push into higher margin product segments, such as coffee.

Due to its high exposure to bars and restaurants, the pandemic closures had a significant short-term impact, erasing entire 2019 gains.

The lower valuation due to transitional factors, combined with Coca-Cola's stronger positioning and focus on high margin segments make the company an attractive long-term holding for a consumer staples portfolio.

Coca-Cola business has been transforming over the recent years with the divesting of the company's global bottling operations. By refranchising its bottling plants, Coca-Cola has been moving away from the capital intensive and lower margin business of bottling. Thus, the share of revenue from Bottling Investments fell from 31% in 2017 to less than 20% in 2019.

The change that KO has undergone in recent years is evident from the company's property, plant & equipment share within the company's total tangible assets.

Back in 2010, KO's asset composition was not materially different from those of its main peers - PepsiCo (PEP) and Keurig Dr Pepper (KDP). KO had a very similar asset split to PepsiCo, with fixed assets of around 30% of total tangible assets. However, KO now has reduced that share to only 16% which is in stark contrast with its soft drinks peers.

By doing so, Coca-Cola is now able to reinvest more heavily into the most critical assets for the business - its brands.

Also, as a result, the bottling companies divestiture the bottling network has become much more efficient and agile, while KO has achieved the following two things:

1) improved operating efficiency and lowered the share of fixed SG&A costs from 36.3% in 2017 to less than 32% in the last twelve months

At the same, Coca-Cola's major peer PepsiCo has gone in opposite direction - increasing the share of fixed costs from 38.5% of revenue in 2017 to almost 39% during the last twelve months.

Thus, the operating margin gap between the two companies has widened even further.

2) increased capacity to invest in its Global Ventures business 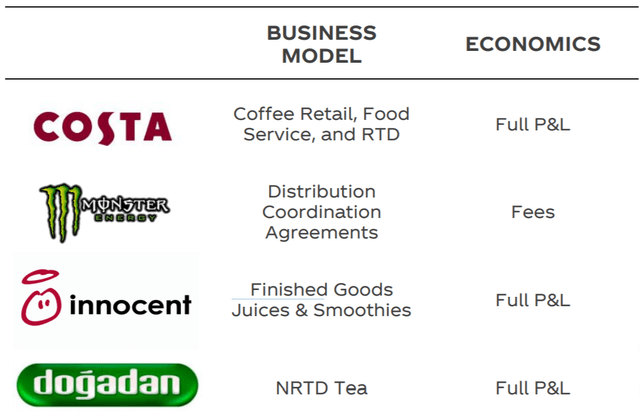 With more than $10bn in cash and equivalents as of last quarter, KO is also well-positioned to continue to expand and reinvest into key high-growth product segments where it currently lags in market share, such as coffee and plant-based nutrition drinks. 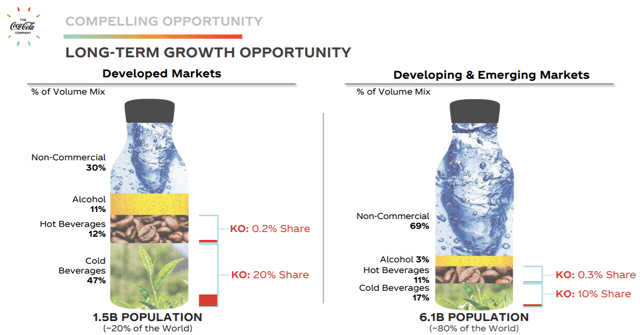 As Coca-Cola is evolving into a more asset-light business focused purely on beverages, the composition of its return on equity is also changing.

By breaking down return on equity of Coca-Cola and its peers, we could analyze its drivers in more detail.

The key driver of KO's high Return on Equity is its industry-leading profit margin. To start with Coca-Cola achieves a higher ROE than its major peer PepsiCo with significantly less leverage. Nestle (OTCPK:NSRGY) on the other hand is significantly less profitable due to its exposure to lower margin segments and significantly lower leverage. In the case of Nestle, however, the conservative capital allocation comes with other benefits which is why the company is also on my watch list.

Coca-Cola's leading brand portfolio focused purely on beverages, combined with the company's unique franchise model has resulted in the highest gross margin among its large cap peers in the soft drinks and snacks space.

On one hand, by divesting bottling operations, KO has improved gross profitability, as bottling companies have significantly lower gross margin of around 41% ($31,099/$75,980).

On the other hand, as we saw above, this also lowered the share of fixed expenses as a share of revenue, which provides another tailwind for profitability.

As a result of this higher profitability, KO could spend much more on developing the most important assets in the consumer staples industry - its brands.

To support its brands, Coca-Cola Company spent around $12bn over the last three years.

Advertising costs included in the line item selling, general and administrative expenses in our consolidated statements of income were $4 billion in 2019, 2018 and 2017.

As a comparison, the similarly sized PepsiCo cumulative advertising spend for the last three years totaled only $8bn.

This way, KO is one of the best positioned global beverage companies to continue adding new and developing some of the strongest global soft drinks brands.

As far as asset turnover is concerned, KO's Return on Equity is less exposed to disruptions in the company's topline when compared to its main peer - PepsiCo.

That was also the case during the recent pandemic when due to KO's sales much higher exposure to bars and restaurants, the company reported a much steeper topline decline than PepsiCo.

Naturally, this led to a larger percentage change in Coke's tangible asset turnover (all assets excluding Goodwill and Intangible Assets).

However, this did not lead to a material decline in Return on Equity of Coca-Cola, in spite of the massive drop in revenue and asset turnover. That would not have been the case, if KO had a full ownership of its bottling operations.

Although Coca-Cola's best in class Return on Equity remained largely unchanged during the recent months, the company's P/S multiple declined twice as much as that of its main peer - PepsiCo.

This in combination with Coke's steeper decline in total sales led to a twofold blow to KO's share price. That is why the company still trades 21% lower than its February highs, compared to only 6% lower for PEP.

However, if we take a longer term view, the key driver of KO valuation remains its operating profitability. This is easily illustrated from the historical relationship between Coca-Cola's P/S multiple and its operating margin.

Source: author's calculations based on data from annual reports and Yahoo!Finance

At first glance, KO's P/S multiple is supported by the current operating margin and on top of that the second half of 2020 will most likely remain challenging:

Despite the significant pressure of top-line and gross margin, in addition to the currency headwinds, comparable operating margins were only slightly lower than last year

However, as economies gradually reopen, these operating margin headwinds will turn into tailwinds for KO's profitability.

Over the long-term KO will also benefit from its push into the high margin coffee segment with its acquisition of Costa, which would also provide product cross-selling and distribution channel benefits.

Although competition in the coffee segment is intensifying with Nestle-Starbucks deal and the formation of JDE Peet's, the coffee business of Costa is characterized with much higher gross margins than the already highly profitable franchise business of Coca-Cola. For the 2013-2018 period Costa had gross profit margins of around 70%, compared to Coke's average gross margin of 61% over the same period.

On top of this opportunity for a further upward P/S multiple repricing, KO share price would also benefit from the higher revenue growth of its Global Ventures segment, which is heavily exposed to the higher growth coffee business of Costa. Coca-Cola also has the opportunity to scale the Costa. 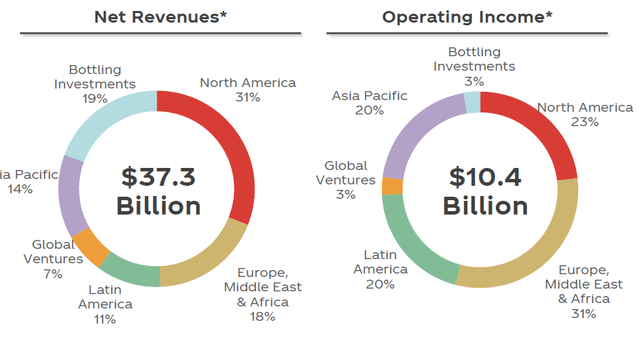 Coca-Cola remains as one of the most profitable and high return global consumer staple companies. By becoming a less capital intensive business, focused on its profitable franchise model, KO also has the opportunity to continue to increase its brand investment at a time when many of its peers struggle with declining profits.

The addition of Costa coffee business also makes perfect sense for Coca-Cola as it could quickly scale up the business globally and capitalize on significant synergies. Costa coffee is also one of the world's best coffee brands which fits perfectly into Coca-Cola's already diversified portfolio of world strongest beverage brands.

Although KO does not appear to be trading at a discount to its near term fundamentals, the business could easily see a positive effect on the upside once sales recover from the pandemic closures and P/S multiple is repriced upwards due to higher operating profitability.

Disclosure: I/we have no positions in any stocks mentioned, but may initiate a long position in KO over the next 72 hours. I wrote this article myself, and it expresses my own opinions. I am not receiving compensation for it (other than from Seeking Alpha). I have no business relationship with any company whose stock is mentioned in this article.

Additional disclosure: Please do your own due diligence and consult with your financial advisor, if you have one, before making any investment decisions. The author is not acting in an investment adviser capacity. The author's opinions expressed herein address only select aspects of potential investment in securities of the companies mentioned and cannot be a substitute for comprehensive investment analysis. The author recommends that potential and existing investors conduct thorough investment research of their own, including a detailed review of the companies' SEC filings. Any opinions or estimates constitute the author's best judgment as of the date of publication and are subject to change without notice.