Greedy euphoria is here, but could it get more delusional?

When is a bull market over?

Keep an eye on options and volume for clues.

I was talking to a friend who made eight figures as a trader and investor. He's a big time biotech investor. Worked with Morgan Stanley and a guy who became a top trader for Stanley Druckenmiller.

Stanley Druckenmiller: Net worth $4B+ as an investor. Was fired by George Soros then rehired leaving Soros' hedge fund in this guy's hands. Helped bet against British Pound in 1992 trade that reportedly made a billion dollars. Closed Duquesne Capital in 2010 to manage own money and that of several friends. Comparable long-term performance record to Buffett. Last year said "buy the disruptors, sell the disrupted." Also said this recently: "I've made some money predicting boom-bust cycles. It's what I do. Sometimes I am right. Sometimes I am wrong, but every bust I had ever seen was preceded by an asset bubble generally set up by too loose policy..."

I asked my guy"when does an irrational bull market end?" He said: "when everyone believes it's a bull market."

There Are A Lot Of Bulls

Over the past several weeks, I think most of the holdouts now believe we are in a bull market. I've heard so many things from investors that remind me of 1999 and 2007:

The Fed has got our back.

A vaccine is coming soon.

Stocks will go up through the election.

Stocks will go up if Trump wins.

Stocks will go up if Biden wins.

Nope, it's a bull market and that's that. Ride it!

But Is It A Bubble?

The CNN Fear & Greed Index is stuck on Greed. But not the extreme greed that usually signals a correction. 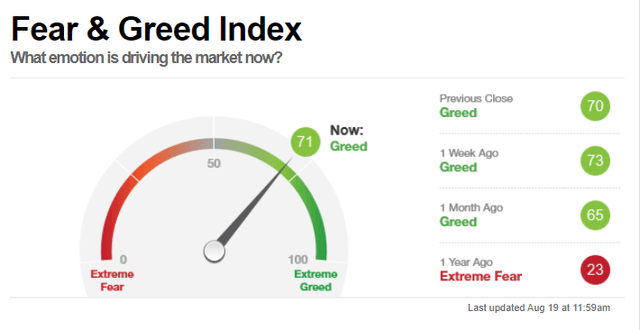 Over at Citigroup, they place market sentiment squarely in euphoria: 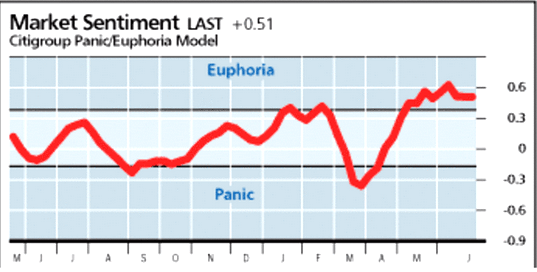 We know that valuations are crazy high. But markets can remain irrational a long time. 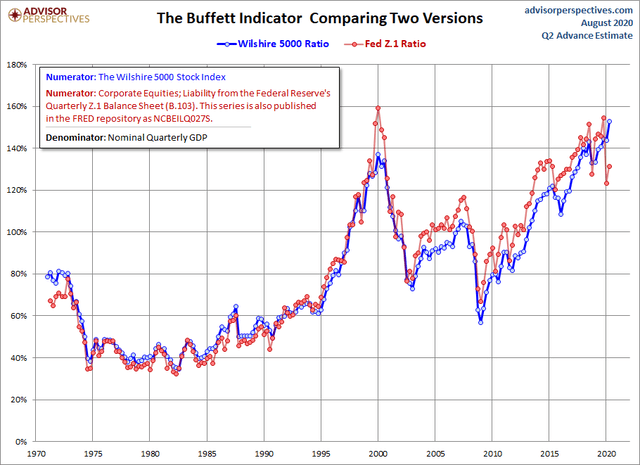 Not much better globally. 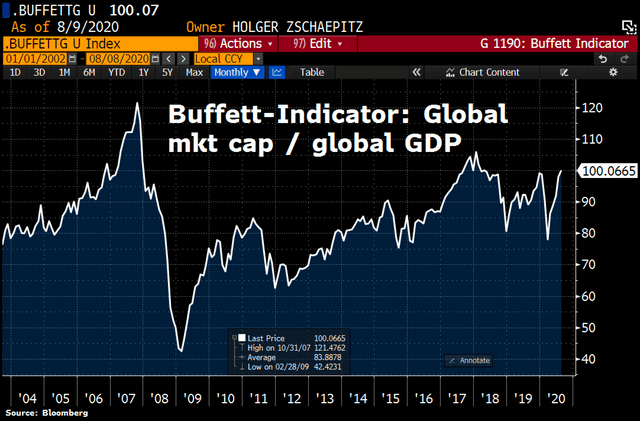 So, we have two components of bubbles. Greed and euphoria as well as overvaluation. But both could still get more extreme.

How can we tell when the end is nigh? Let's think outside the box a moment.

A Sort Of Conspiracy Theory And Tighter Then Realized Liquidity

The Trump bears, those who think that a Trump win could cause a stagflationary depression (like me), are largely out of the stock market. At least, they are not committing new money.

Consider that Warren Buffett and George Soros aren't scooping up stocks right now by all reports. Think about folks who just don't like President Trump. Do you think they are investing heavily?

I have contact with hundreds of investors per month. I don't think Trump bears are investing new money. I consult on, manage or influence nine figures of assets and that's what I'm hearing.

Call it a buyer's strike or folks just uncomfortable with the investment climate. Either way, it has an impact, and limits the number of greater fools to push stocks higher. I think that's a reason that the euphoria numbers aren't quite as high as possible.

That leaves a lot of what happens in the market short term to the "just wanna ride" crowd. This broad group has a few subgroups.

Volume has plummeted. We have seen this game before. Before most other major corrections, including both of 2018's, as well as, in the months leading up to the coronavirus crash (which I think would have been a valuations correction if there hadn't been a pandemic).

What if the traders can shake the Robinhooders out of the forest? Moving risk assets with volume this low could cause a tsunami of selling.

Consider liquidity. Low liquidity is the hammer if there's a rush to the exits. And what if the Trump bears remain on strike until after the election? Those "limit down" days should not be far from memory. 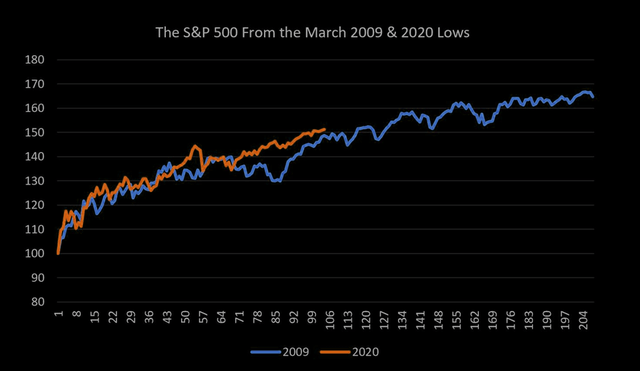 Keep An Eye On Options

I have been tracking the put to call ratio for a long time. It's at extreme lows right now. 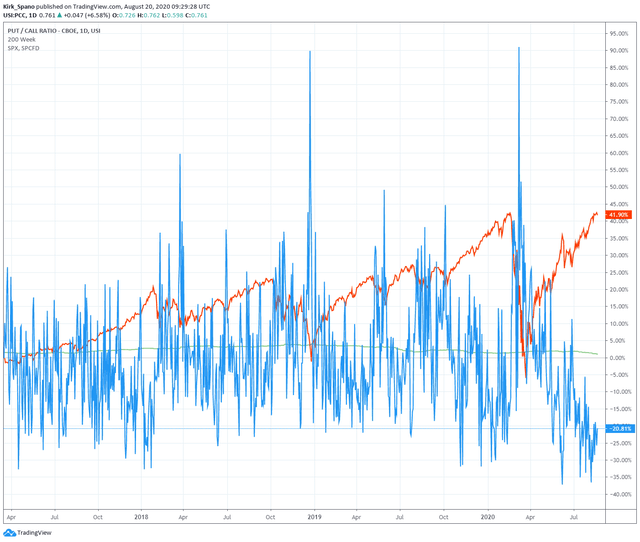 What do alligator jaws always do eventually?

Interestingly, "skew" is elevated showing that protection trades are relatively expensive despite only a minor uptick in interest in puts - see bottom right of the chart above. 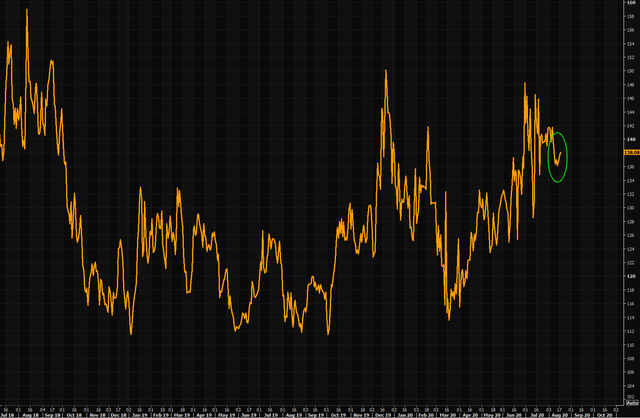 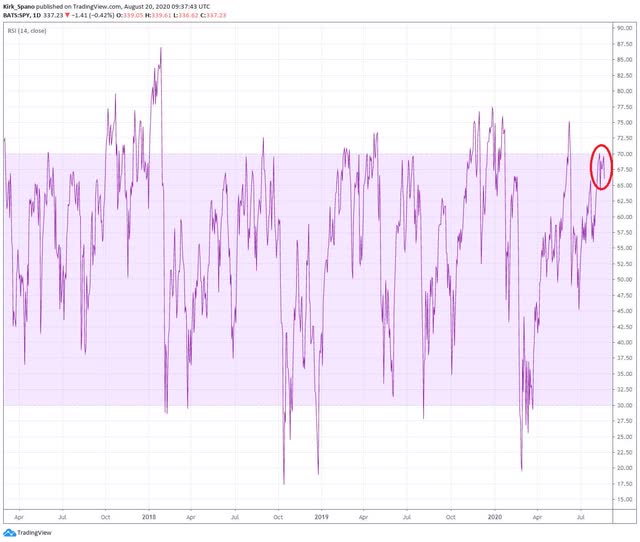 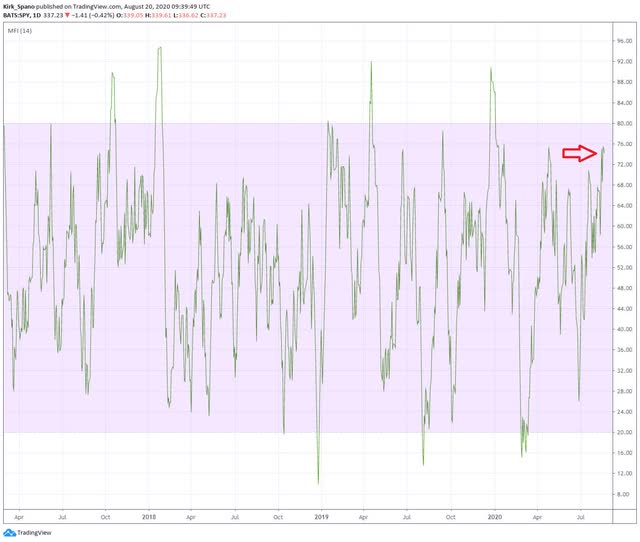 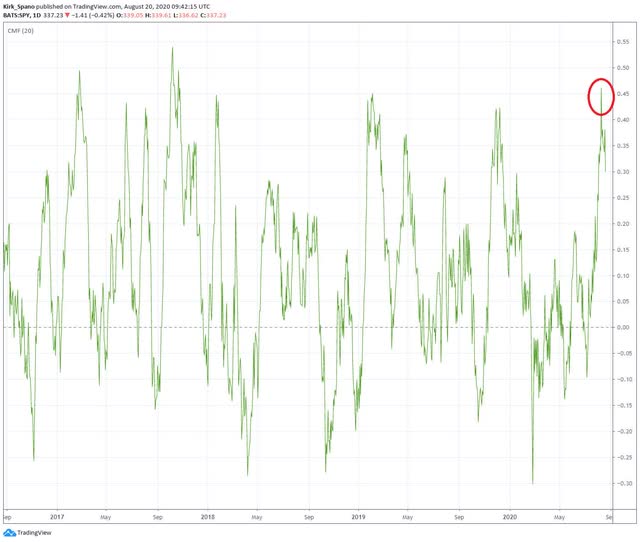 Those are all daily charts and indicative of small corrections on their own. In the context of the weekly charts however, there should be concern for a larger correction, though maybe not new lows. 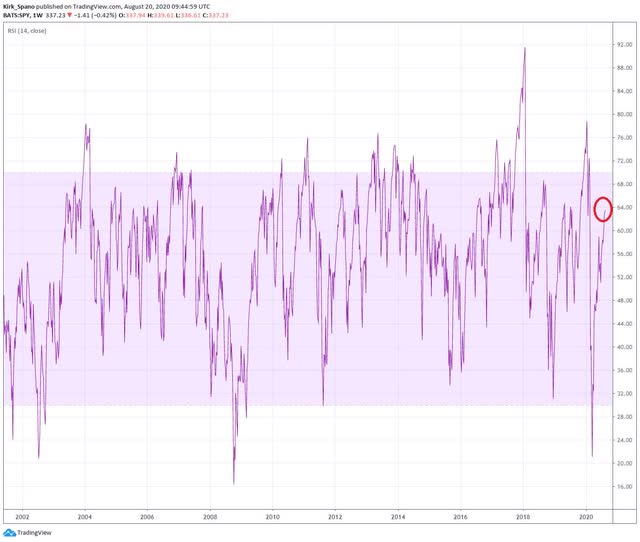 Many would suggest that because the weekly is not overbought, merely approaching, that there's still upside in the stock market. That could very well be true given that the Fed money printer go brrr.

However, look at other two piece corrections. I think 2018 is most similar given the market structure is built on the same tax cuts and deficit spending. The second and deeper correction in Q4 2018 never got overbought on the weekly after the initial early year "unwinding of the short vol trade" correction.

In short, I do not believe we need to see an overbought weekly chart this soon after a correction. Where it sits now is a warning sign. The other indicators are essentially similar.

So that leaves us with MACD. Luckily we have "Option Girl" Bonnie Gortler helping us. Bonnie spent 30 years-plus working with the developer of MACD while managing money. She has a great free piece describing how to use MACD here. 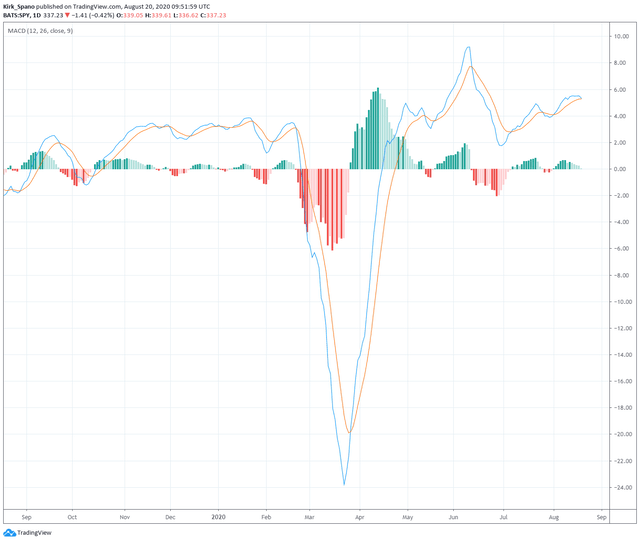 You can see how MACD is threatening to cross over on the daily chart. That doesn't mean it will happen, but it doesn't look good. The market is at a clear crossroads. One of the ancillary things Bonnie looks at is breadth, and that has turned negative as decliners have outpaced advancers in recent days. Not a sign of a healthy market.

As I said in our Friday webinar a couple weeks ago, it's time to move to the conservative edge of your long-term strategic asset allocation.

Strategic asset allocation is the planned investment levels by percentage of your portfolio that you gravitate to. Tactical is what you are doing in real time based on conditions. So, tactically, we are saying get as conservative as your long-term range allows.

We have three categories of risk tolerance with each having different high-end cash positions right now:

To make it simple, sell broad based ETFs and mutual funds first. Sell the SPDR S&P 500 ETF (SPY) which is loaded with zombie companies that I described weeks ago here and here.

Then, plan to invest using the barbell strategy I discussed here.

For now, though, you need to be a seller. This rally is on its last legs or maybe already over.

Protect, grow and generate income from your portfolio. Join our team as we navigate the massive changes in the economy using a smart 4-step process borrowed from top investment managers and institutions. Find out how this process helped Kirk Spano predict the dot.com bust, real estate driven financial crisis, shale oil boom & bust, both 2018 corrections, the shift to "the smart everything world," the Coronavirus crash in January and the coming of "helicopter money." Follow to learn what he sees coming in the 2020s.

Disclosure: I am/we are short SPY. I wrote this article myself, and it expresses my own opinions. I am not receiving compensation for it (other than from Seeking Alpha). I have no business relationship with any company whose stock is mentioned in this article.

Additional disclosure: I own puts on SPY. --- See my blog for details about a special upcoming webinar. --- I own a Registered Investment, but publish separately from that entity for DIY investors. Any information, opinions, research or thoughts presented are not specific advice as I do not have full knowledge of your circumstances. All investors ought to take special care to consider risk, as all investments carry the potential for loss. Consulting an investment advisor might be in your best interest before proceeding on any trade or investment.