Few stocks have seen as rarefied performance as Fastly (NYSE:FSLY) this year, the content delivery network that uses edge computing technology to rapidly deliver web content to users. Like other internet infrastructure companies that price their offerings based on their clients' usage (Twilio (TWLO) and Bandwidth (BAND) are other examples of companies enjoying banner years in 2020), Fastly has achieved unheard-of growth rates this year.

At the same time, the whole market rally this year has been driven by "FOMO" - or a fear of missing out. Investors have latched onto the best-performing names, clinging to the belief that winners will keep winning and that any companies with exposure to the internet are the safest shelters to hide in amid the coronavirus. Yet over the past month, investors seem to have fatigued of Fastly, and the stock is down ~30% since reporting second-quarter results, despite a "beat and raise" on paper.

The question for investors is: is it the right time to catch Fastly on this rare dip (after the stock has run up ~4x since the start of the year), or does this correction have further room to go?

In my view, it's the latter. Fastly's strong second-quarter results, which I'll provide an update on in this article, do little to persuade me to buy Fastly stock while it's trading at nosebleed levels, because I think all of that strength is already baked into the company's current valuation multiple.

It's easy to see why Fastly is such a popular story. The chart below, taken from tech research website SimilarTech, estimates Fastly's market share at only ~3% among the top 10k websites on the internet.

And Fastly's market share is rapidly climbing. Fastly's Q2 revenue growth clocked in at 60% y/y, while Akamai (AKAM) - one of Fastly's primary competitors - grew at only 13% y/y, implying substantial share gains. Importantly, Fastly's focus on "edge computing" and delivering data and applications to users as fast as possible has made it a go-to CDN (content delivery network) in a pandemic when internet usage is soaring and bandwidth demands are high. Read more on Fastly's edge compute technology from its website here. Essentially think of Fastly a fast lane for internet traffic that collects toll fees the more it gets used.

It's important to acknowledge this bullish thesis while at the same time being realistic at what kind of price Fastly should be able to command in the market. At current share prices near $85, Fastly already trades at a market cap of $8.69 billion. After netting off the $384 million of cash and $30 million of debt on Fastly's most recent balance sheet, its enterprise value is $8.33 billion. Versus Wall Street's FY21 revenue consensus of $394.6 million (+33% y/y; data from Yahoo Finance), Fastly trades at a stunning 21.1x EV/FY21 revenue. This is extremely rich for a company that is generating only ~60% gross margins (whereas most of the software and internet companies trading at these nosebleed levels tend to carry margins in the 70s or 80s). And while competitor Akamai doesn't make for a like-for-like compare given its revenue growth is significantly slower than Fastly, it's important to note that mature CDNs like Akamai are trading below 6x forward revenues (and that's after a multiples expansion from the mid-4s early this year).

Yes, sentiment is on Fastly's side right now, but aside from a general market retreat from highly-valued tech stocks, there are also a number of fundamental risks that could pull Fastly down:

In my view, investors are best off staying on the sidelines here.

Let's now parse through Fastly's latest second-quarter results in greater detail. Make no mistake - Fastly's print was tremendously strong; it's just that I think this strength is already baked into Fastly's premium multiple (and considering the fact that Fastly shares have fallen sharply from the >$100 range post-earnings, it seems that the market agrees). 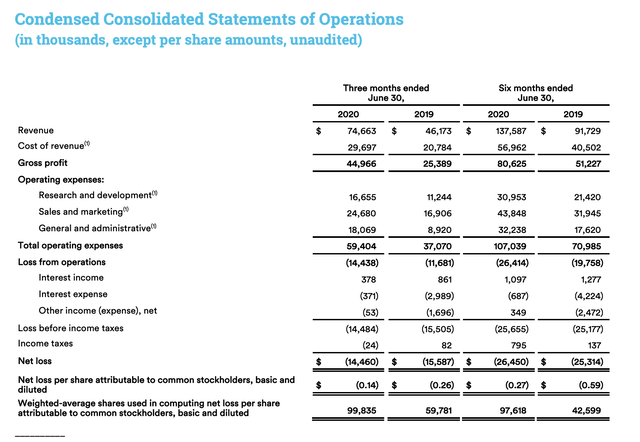 More in the way of good news: platforms like Fastly benefit from larger scale, and that revenue growth manifested itself into a major boost in gross margins, which hit 60.2% in Q2 and improved 520bps y/y versus just 55.0% in the year-ago quarter.

To me, however, Fastly's quarter fell short of a perfect story when it came to enterprise customer counts. Fastly's earnings messaging focused a lot around how the company added 114 net-new customers in the quarter to end at 1,951 total customers - its best quarter for customer adds. However, when we drill down into the portion of that customer base that's enterprise (which Fastly defines as delivering more than $100k in annual revenue), the company added only 7 net-new enterprise clients. That's down from a typical average of ~10 new adds per quarter, as seen in the chart below: 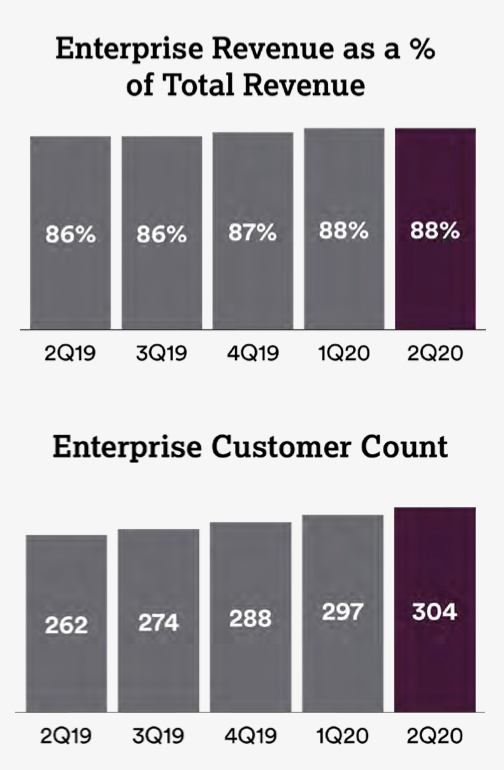 Considering that these ~300 customers make up the lion's share (88%) of Fastly's revenue, the slowdown in adds and the customer concentration is somewhat concerning, especially with CEO Joshua Bixby's disclosure on the Q2 earnings call that TikTok makes up 12% of revenue:

In addition, ByteDance, the operator of TikTok was our largest customer in the quarter. Any ban of the TikTok app by the US would create uncertainty around our ability to support this customer. While we believe we are in a position to backfill the majority of this traffic in case they are no longer able to operate in the US, the loss of this customer's traffic would have an impact on our business [...] it represents just about 12% of revenue, trailing 6 months ending June 30. Less than 50% of that is in the US, we continue to monitor the situation closely."

Another concern is that in spite of robust revenue growth and gross margin improvements, Fastly remains a steadfast cash burner. Year to date, Fastly has burned through $30.7 million in FCF, 23% higher than the first half of last year.

While Fastly's ~$350 million in net cash is more than sufficient to support these levels of burn, I think stocks trading at a >20x multiple should be able to prove bottom-line strength as well as strong revenue growth.

The bullish thesis for Fastly is loud and clear - it's a differentiated, high-speed content delivery network that has managed to see revenue growth soar to >60% y/y - but with the stock trading at dangerously high multiples, it's important to recognize the bear case as well. I'm not so keen to invest in high-flying stocks while the market is sitting at all-time highs and in a possible bubble.

For a live pulse of how tech stock valuations are moving, as well as exclusive in-depth ideas and direct access to Gary Alexander, consider subscribing to the Daily Tech Download. For as low as $17/month, you'll get valuation comps updated daily and access to top focus list calls. This newly launched service is offering 30% off for the first 100 subscribers.

Gary Alexander
25.43K Followers
With combined experience of covering technology companies on Wall Street and working in Silicon Valley, and serving as an outside adviser to several seed-round startups, Gary Alexander has exposure to many of the themes shaping the industry today. He has been a regular contributor on Seeking Alpha since 2017. He has been quoted in many web publications and his articles are syndicated to company pages in popular trading apps like Robinhood.