Author's note: This article was released to members on August 19, 2020. Please check latest data before investing.

The Weekly Closed-End Fund Roundup will be put out at the start of each week to summarize recent price movements in closed-end fund [CEF] sectors in the last week, as well as to highlight recently concluded or upcoming corporate actions on CEFs, such as tender offers. Most of the information has been sourced from CEFInsight or the Closed-End Fund Center. I will also link to some articles from Seeking Alpha that I have found for useful reading over the past week. The searchable tag for this feature is "cildoc". Data is taken from the close of Friday, August 14th, 2020. 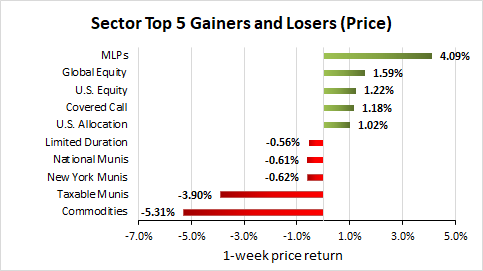 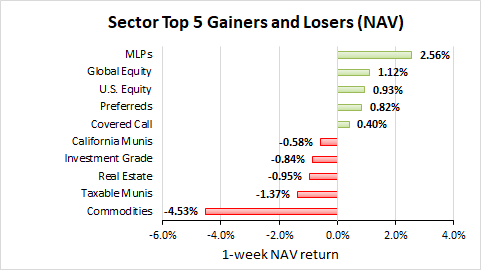 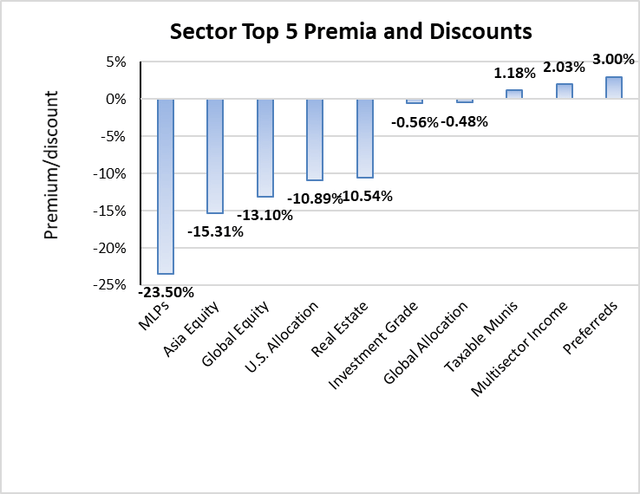 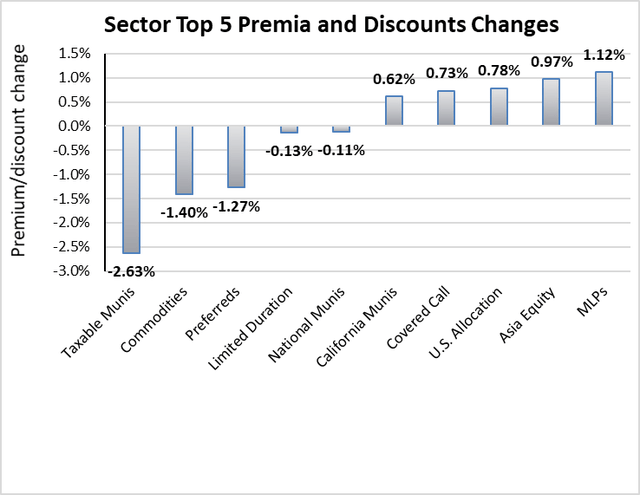 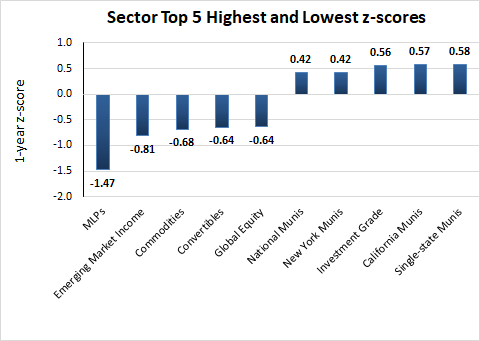 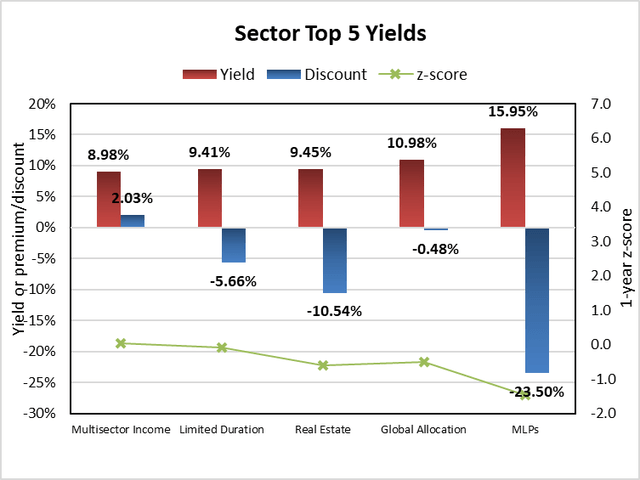 Individual CEFs that have undergone a significant decrease in premium/discount value over the past week, coupled optionally with an increasing NAV trend, a negative z-score, and/or are trading at a discount, are potential buy candidates. 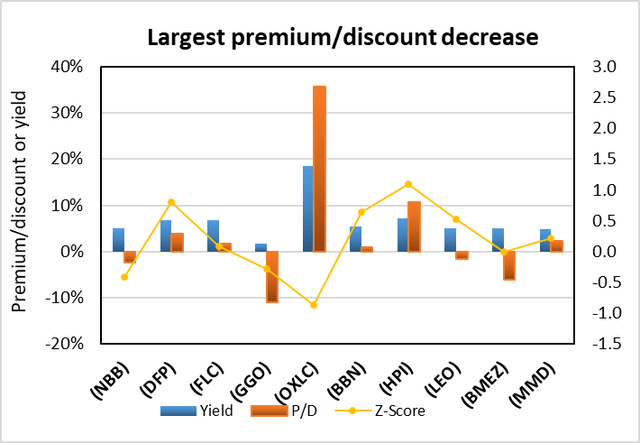 Conversely, individual CEFs that have undergone a significant increase in premium/discount value in the past week, coupled optionally with a decreasing NAV trend, a positive z-score, and/or are trading at a premium, are potential sell candidates. 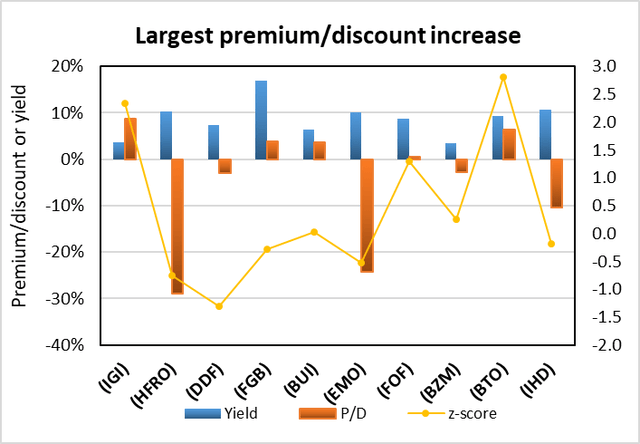 These are sorted in ascending order of distribution change percentage. Funds with distribution changes announced this month are included. Any distribution declarations made this week are in bold. I've also added monthly/quarterly information as well as yield, coverage (after the boost/cut), discount and 1-year z-score information. I've separated the funds into two sub-categories, cutters and boosters.

CEF analysis from around Seeking Alpha...

The Value Trend presents HGLB: Not Worth It (Aug. 11)

*To subscribers: these link to the public version of the article, which you will already have seen in the members section.

The August distribution changes have been updated in our database! Pleasingly, we see a continued trend of more boosters than cutters, albeit with many of the boosts being of the smaller variety. None of our portfolio holdings suffered cuts.

Notably, Pioneer Municipal High Income Advantage Trust (MAV), a holding in both our Tactical Income-100 and Taxable Income portfolios, boosted its distribution again, from $0.0425 to $0.045 (+5.9%) per month. This is the second time that MAV has increased its distribution in the last 12 months, and its current distribution is now +20% higher than it was a year ago. The current tax-free yield is 4.82%.

From the press release, we can possibly infer that MAV managed to pick up bargains in the high yield municipal bond market during the recent sell-off, boosting future earning potential:

"MAV’s August distribution of $0.0450 per share represents a 5.90% increase from $0.0425 per share paid in July. The increase was due primarily to select opportunities in the high yield municipal bond market. This change better aligns the Fund’s distribution rate with its current and projected level of earnings and reserves."

The recent strong performance of MAV vis-a-vis the municipal bond benchmark the iShares National Muni Bond ETF (MUB) as well as the generally solid Nuveen Municipal High Income Opportunity Fund (NMZ) has narrowed MAV's discount considerably to -8.65% and it now has a slightly positive z-score of +0.8. 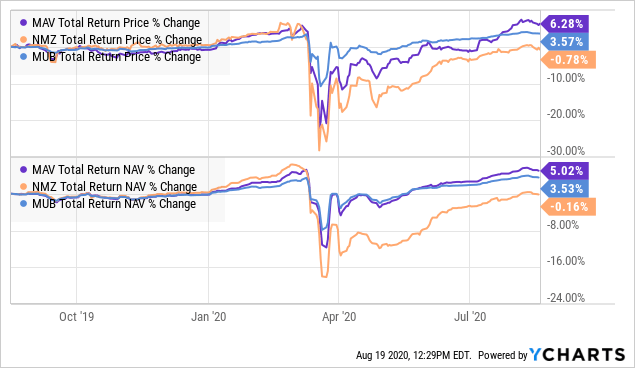 Scanning through the list of boosters, I noticed that Eaton Vance Senior Income Trust (EVF) was the second-highest booster at a +14.8% increase. However, we can see that EVF is one of the funds that readjusts their distribution monthly, and like other senior loan funds, its distribution level is still down significantly from a year ago as expected due to falling interest rates. 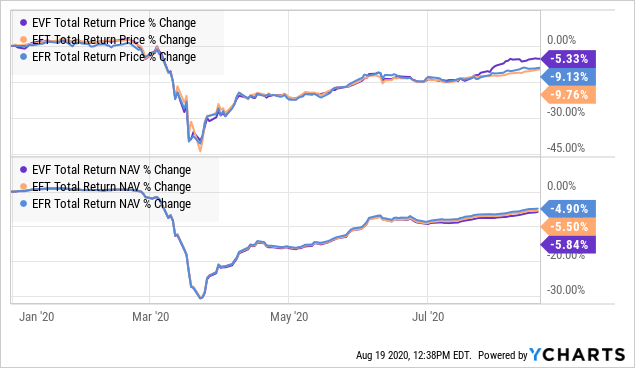 Closed-end funds news and recommendations are now exclusive to members of CEF/ETF Income Laboratory (including profitable tender offer opportunities). We also manage market-beating closed-end fund (CEF) and exchange-traded fund (ETF) portfolios targeting safe and reliable ~8% yields to make income investing easy for you. Check out what our members have to say about our service.

Disclosure: I am/we are long BBN, MAV, OXLC. I wrote this article myself, and it expresses my own opinions. I am not receiving compensation for it (other than from Seeking Alpha). I have no business relationship with any company whose stock is mentioned in this article.