Seasonality plays a significant role when it comes to the path of least resistance of some commodity prices. The production of raw materials is a local affair in parts of the world where the crust of the earth contains energy, minerals, and metals or where the soil and access to water support the agricultural products. Consumption is ubiquitous, as people worldwide require raw materials that power their lives, provide nutrition, shelter, and clothing.

Commodities are stables, but they can be highly sensitive to macroeconomic factors such as global growth or contraction. The US dollar is the world’s reserve currency and the benchmark pricing mechanism for most raw materials. Therefore, changes in the foreign exchange markets can also impact commodity prices. As we move into the fall season, the demand for some commodities will decline, and for others, it will rise. Over the coming weeks, we will enter the peak season for usage in natural gas and heating oil, but the consumption of meats and the gasoline demand typically declines. Futures prices often reflect seasonal periods, but 2020 is anything but a typical year in markets across all asset classes. The Invesco DB Commodity Index Tracking Fund (NYSEARCA:DBC) holds a diversified portfolio of commodity futures contracts. At a time when the dollar is falling, and inflationary pressures could rise, putting the DBC product on your investment radar could be the right move for the coming months and years.

The winter is coming fast- the offseason for meats and gasoline

Next week ushers in September and the beginning of the fall season. As the hot and humid days of summer end, the fall will give way to the winter over the coming weeks and months. In the world of commodities, the peak season for animal protein consumption and the time of the year when gasoline demand peaks are now ending.

The grilling and driving seasons run from the late spring through the fall each year. Gasoline, and cattle and hog futures tend to peak during the spring months in anticipation of demand and fall at the end of summer as the fall and winter months are times when demand reaches a seasonal low.

In an ordinary year, futures markets are highly sensitive to seasonal factors, but 2020 has been anything but a typical year. The price of crude oil fell to negative territory in late April, and gasoline reached its lowest price in many years when it traded to a low of 37.60 cents per gallon in March. 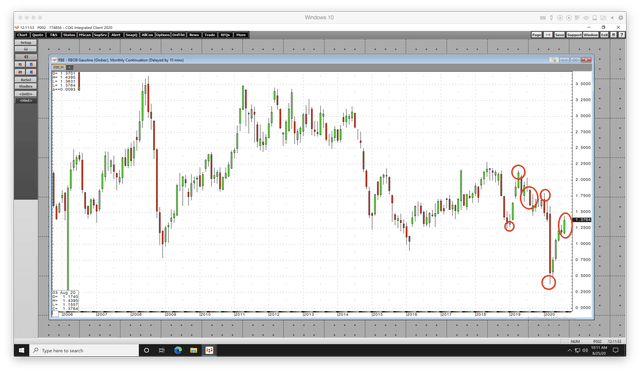 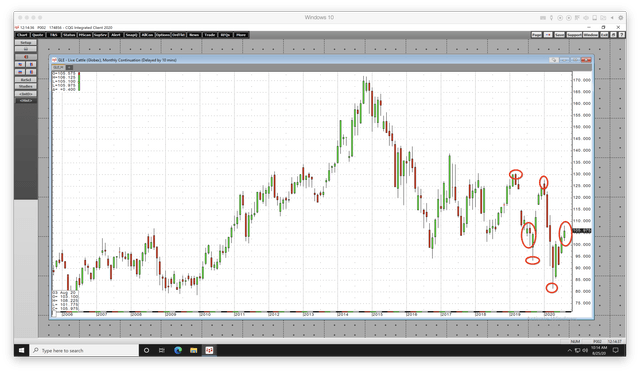 The high was in March at $1.3045, and the low for the year was in September at 93.40 cents. This year, the low came in April at 81.45 cents as the market prepared for the peak demand season with the high at $1.2755 in January during the middle of the winter season. In August 2020, live cattle have traded between $1.01775 and $1.08225 per pound on the nearby futures contract, slightly stronger than at the same time during the previous year. 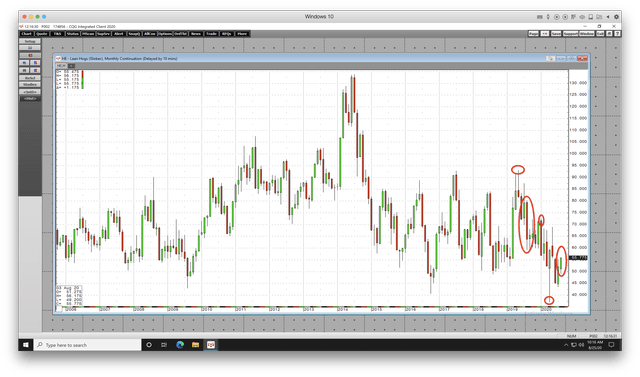 Seasonality has not been a factor for gasoline or meat prices in 2020.

The withdrawal season for natural gas is on the horizon

The volatile natural gas market tends to reach highs at the beginning of the winter season from November through January each year. The lows often occur in March and during the spring and summer months when injections flow into storage across the United States. 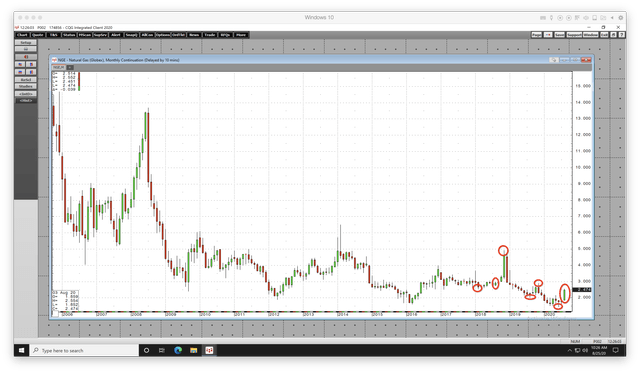 In August 2019, natural gas traded in a range from $2.029 to $2.333 per MMBtu. In August 2020, the nearby futures contract has traded in a band from $1.852 to $2.554 as the range widened from the previous year. The natural gas market is moving towards the peak season of demand that begins in approximately twelve weeks with a bias towards higher volatility than last year.

Seasonality in natural gas, gasoline, and animal protein futures markets may not have the same impact on prices as in past years over the rest of 2020 and 2021 and the following years. The global pandemic has caused significant shakeups in markets across all asset classes. In commodities, the effects of COVID-19 continues to cause dislocations in fundamental supply and demand equations.

Stimulus is bullish for commodities and is creating dislocations in markets

The tidal wave of stimulus and record low interest rates is fundamentally bullish for commodity prices. Liquidity from central banks and governments increase deficits. In May, the US Treasury borrowed a record $3 trillion, and more borrowing is likely on the horizon. As the money supply swells to unprecedented levels, the purchasing power of all currencies declines, stoking inflationary pressures.

At the same time, the divergence between producer and consumer prices does not show up in futures markets. In cattle and hog markets, producers have suffered under the weight of low prices and a lack of demand. As processing plants closed down for a period, the requirements for animals declined. However, the falling supplies of finished products caused meat prices to rise for consumers, and availabilities declined. Some supermarkets and retailers limited purchases of beef and pork. The divergence between consumer and producer prices has been a result of the pandemic.

We have seen a similar divergence in the gasoline market. Consumer prices did not drop to the levels seen in the futures market in March and April. However, the price recovery caused prices at the pump to rise. Meanwhile, in natural gas, another seasonal commodity, the recent rally received some support from news Warren Buffett purchased the transmission and pipeline assets of Dominion Energy (D) for $10 billion in cash and assumed debt. While the acquisition did not impact the price of the energy commodity, it was a sign that the value investor who had not made any purchases during the risk-off period believed in the futures of natural gas in the United States.

The impact of the stimulus, COVID-19’s effect on supply chains, and investment behavior have been far more influential for prices than seasonality in 2019. The trend is likely to continue.

The decline of the dollar is supportive of raw material prices

The US dollar is the world’s reserve currency. The greenback is the international pricing benchmark for most commodities. A strong dollar tends to weigh on raw material prices, and when the dollar declines, commodities prices often rise.

The dollar index, which measures the value of the dollar versus the other leading world currency instruments, rose to its highest level since 2002 during the risk-off period in March. After trading to 103.96, the index has steadily declined. In July, it broke through its technical support level at the September 2018 low at 93.395. 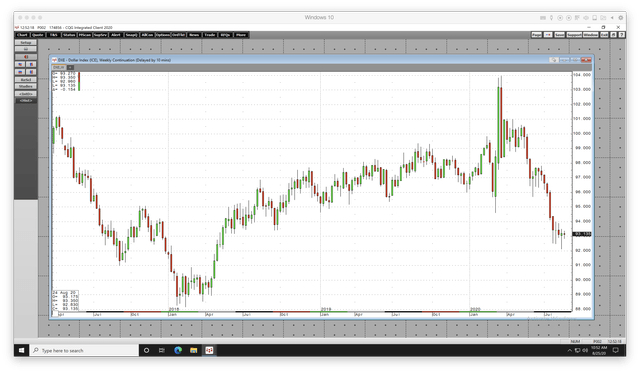 As the dollar index’s weekly chart illustrates, the dollar was trading at the 93.135 level on August 25, which was just above the recent low. The downtrend in the dollar since late March is a supportive factor for commodity prices.

We have learned to expect the unexpected in 2020, and the lesson is likely to serve us well over the coming months and years. In 2008, the aftermath of the global financial crisis led to a rally in the commodities asset class. Prices rise to multiyear or all-time highs by 2011. The actions by central banks and governments have been more aggressive in 2020 than in 2008, and history is likely to repeat when it comes to inflationary pressures. Simultaneously, the US dollar’s technical breakdown creates a potent bullish cocktail for the raw materials asset class.

I believe that we will see a secular bull market in commodities over the coming months and years. Buying commodities on price weakness is likely to be the optimal approach to the asset class. Commodities can be highly volatile; we should see a bumpy path to the upside.

For those looking for some commodity exposure, the Invesco DB Commodity Index Tracking Fund (DBC) is a liquid instrument that holds a diversified portfolio of commodity futures contracts. The fund summary and top holdings of DBC include:

DBC holds a portfolio of commodities that can be sensitive to seasonal factors including, energy and agricultural products. DBA has net assets of $851.27 million, trades an average of 1,076,442 shares each day, and charges a 0.85% expense ratio. 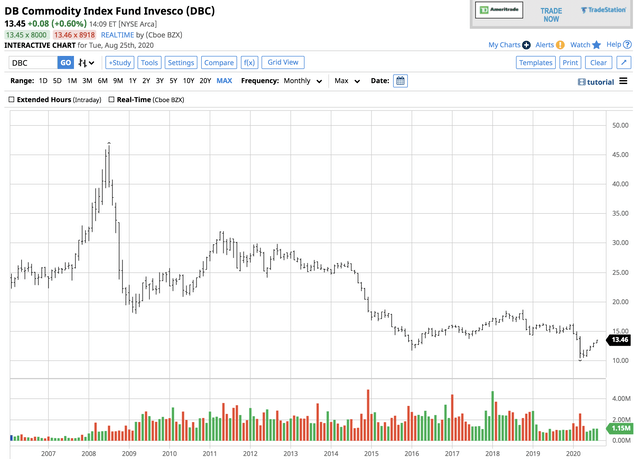 In the aftermath of the 2008 global financial crisis, the DBC ETF product fell to a low of $17.94 and appreciated to a high of $32.02 in 2011 or 78.5% as commodity prices rallied and peaked. At below $13.50 per share on August 25, DBC is at an attractive level for those looking to incorporate commodity exposure in their portfolios.

The stimulus and the falling dollar are bullish for commodity prices for the coming years. The current environment is likely to trump seasonality. I am a buyer of commodities on price weakness as the coming years could usher in another bull market in the asset class.

Andrew Hecht
27.81K Followers
Author of Hecht Commodity Report
Weekly commodities commentary and calls, from a Wall Street veteran
Andy Hecht is a sought-after commodity and futures trader, an options expert and analyst. He is the #2 ranked author on Seeking Alpha in both the commodities and precious metals categories. He is also the author of the weekly Hecht Commodity Report on Marketplace - the most comprehensive, deep-dive commodities report available on Seeking Alpha.