Exxon's (NYSE:XOM) recent relegation from the Dow was one more ignominy for the company whose shares have traded at moments this year at two-decade lows. There is a substantial bear case against Exxon, and it is reflected in the company's abysmal share price (though for now, shareholders console themselves with its meaty quarterly dividend checks). I think Exxon is going to sail through this and see a bright future for its shares. Exxon is a large holding of mine, so I may have some confirmation bias, but below I set out in brief why at these prices Exxon is massively oversold.

A lot of investors may prefer Exxon in the oil space, but a lot also prefer other names. For example, there is a case to be made as to why Chevron (CVX) is a better name than Exxon at this point. For those with higher risk tolerance and looking outside U.S. listings, there is similarly a case to be made for Repsol (OTCQX:REPYF, OTCQX:REPYY) (such as The Investment Doctor's Repsol Is Stubbornly Holding Onto Its 15% Dividend) or Lukoil (OTCPK:LUKOY, OTCPK:LUKFY, OTC:LUKOF) (see for example Danil Kolyako's March piece Lukoil: Record-High Dividends Are Counterweighted By The Gloomy Outlook In 2020).

The question I am answering in this piece is not whether Exxon is the best oil sector pick. My focus is simply on Exxon, especially for investors already below water on Exxon who are trying to assess whether it is worth holding on for a recovery.

Exxon: The Bear Case in Brief

The current bear case against Exxon can be summarized in three parts:

Additionally there is the ever-present risk in oil of supply shocks in given areas of political risk, which for Exxon currently is Guyana, but I think that's a manageable structural risk for any diversified multinational oil major, so I don't worry about it too much. If anyone can navigate political risk, a company like Exxon which has done it for a century can. Exxon is certainly geographically diversified. 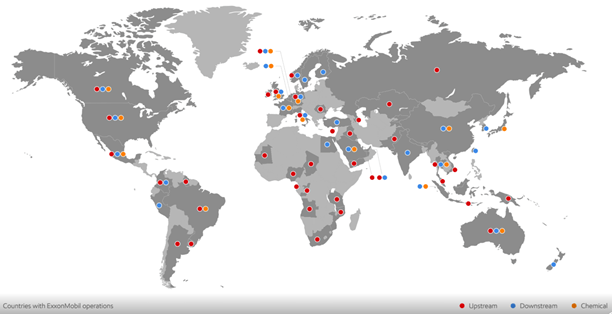 To some extent, the second and third bear cases are a subset of the first bear case, and its corollary, that long-term demand decline equals long-term pricing weakness. If the oil price is high enough, dividend cover won't be a problem in the short term, and qualms about Exxon's management while still pertinent will have less prominence.

So ultimately the main question for investors asking whether Exxon at $40 and an 8.7% yield is the buy of a lifetime or a value trap boils down to taking a view on the oil price first and foremost. In the very short term, oil prices can behave irrationally, but in essence they are a simple reflection of supply and demand over the medium to long term.

Last year McKinsey published a report on the oil and supply demand outlook. It collated various estimates from the past year on the likely future oil prices. These estimates were taken from expert sources, not a man in a saloon throwing darts at a price chart. Look at the estimates and consider where we have actually been since then. 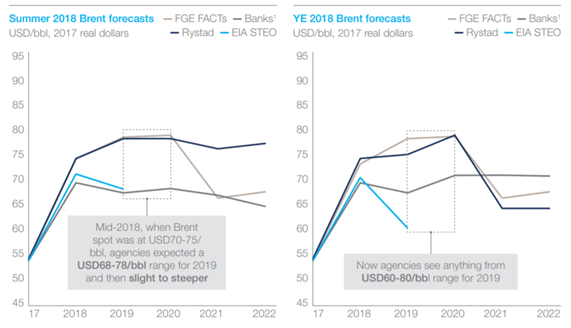 Sure, there have been some unexpected events, like a pandemic. But those are things which experts ought to be factoring into forecasts albeit discounting for probability. In any case, there is a clear lesson: expert oil price predictions can be very, very wrong.

Weirdly, we keep learning this lesson despite legions of people whose jobs boil down to predicting oil prices. So, when the investment case for or against the oil sector is based on future oil price predictions, as it almost always is to some extent, dangers lurk.

So, it's hard to predict oil prices even as an expert. But I contend that both demand and supply trends are moving in ways which will benefit XOM in the medium and long term.

On the demand side, oil demand is set to increase year after year. Environmentalists are destroying large amounts of trees to print tracts saying why this isn't so. Peak oil theses abound as to why oil demand will wither away. But most of this I think is based on a variety of false or overstated premises.

One is that electric vehicles will replace the need for gasoline. Gas is only one use of oil. Passenger vehicles, which is where the EV focus is for now, account for around one quarter of oil use globally. Of that, some will undoubtedly be displaced by batteries or chargers. But a lot of vehicles will continue to run on gasoline for the foreseeable future. Even some of the EVs use power, which is generated by oil-fired power plants, although in the U.S., it's a relatively low number. 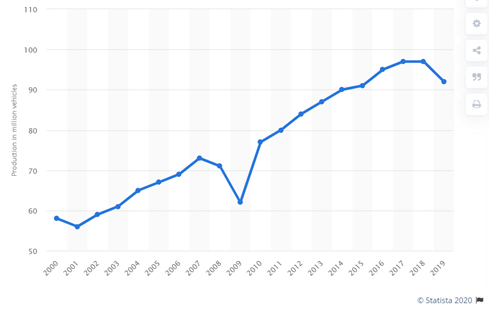 Meanwhile, in the past 10 years, electric vehicles are estimated to have replaced the equivalent of 352,000 barrels per day in oil demand. That's a lot. But in the same period, oil demand has increased regardless by 12 million barrels per day.

So, electric vehicles will increase in popularity - maybe it's Tesla (TSLA), maybe it's established players, maybe it's someone else. They probably will also increase in scope, with a shift away from passenger cars to all sorts of transport, although the time span on that being widely commercialized is likely decades, not years. But that doesn't matter much for oil demand in the grand scheme of things.

Globally awareness is rising that the environment is being damaged. Maybe this is due at least in part to fossil fuels - I think there are probably a lot of things going on at once - but certainly there is a vehement groundswell against oil use, which I expect to continue to grow with time.

However, the words aren't exactly matched by action. At the individual level, I don't see dramatic behavioral change amongst most environmental activists, anecdotally. I don't personally know anyone who is aiming to cut reliance on fossil fuels out of their life, but I also don't personally know anyone who is even aiming to cut their personal fossil fuel footprint significantly. Doubtless there are such people, and I wish them well, but I think they are in a small minority. Moreover, where individuals are not quickly reducing fossil fuel use, governments are also not matching words with deeds. Consider as an example the "net zero" plan of the U.K. government amongst the more progressive on environmental issues. It has pledged to cut the U.K.'s net emissions of greenhouse gases by 100% by 2050 relative to 1990 levels.

So, it's a cut of 1990 levels, not today's levels, it's 30 years out, and it doesn't necessarily reduce fossil fuel use (it could increase, in fact), it simply requires that it is balanced out in terms of activity to absorb carbon dioxide, e.g. plant more trees, which in practice I find an environmentally destructive policy as it typically uses monocultures of non-native species.

But guess what? Emissions were going down long before this plan was agreed in 2008 (note the date, by the way: dealing with environmental crises distracts from economic crises). 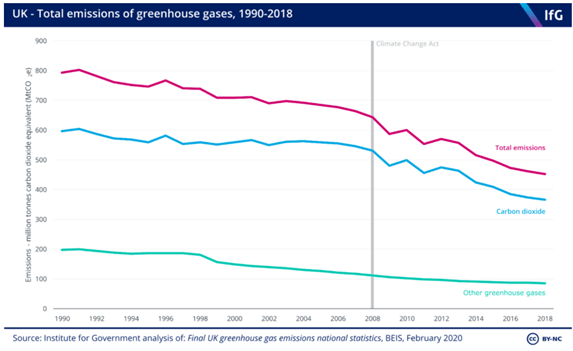 Greenhouse gas emission in the U.K. has been in steady decline in the U.K. for decades already, it transpires. So the government commits to fairly vacuous policies which don't cut oil production or use, which continues to rise globally. 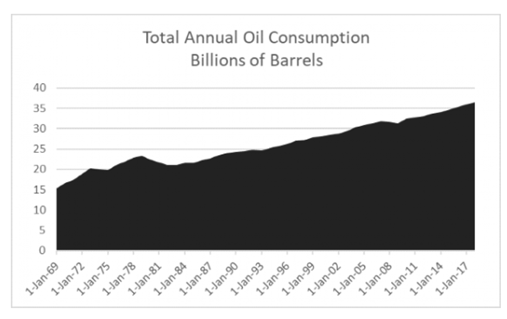 The green agenda is real, and despite its positive intentions, it is economically destructive in many ways. I expect it to keep growing in influence. But I don't see that damaging fossil fuel production existentially in the coming decades.

The main reason I expect oil demand to keep doing what it has done for decades and increase more or less year after year is simple: there are ever more people with resources to buy oil and requirements to use it. China has moved hundreds of millions of people out of poverty into the working and middle class, consuming more which requires more oil. India is doing the same, more slowly. By rights it should happen to Africa too at some point, although I wouldn't bet on that as much as in India.

Consider this chart. Asia is going to add the equivalent of a whole Europe in population. Sub-Saharan Africa alone is projected to add more than a billion in population. That's just by 2050!

As with oil prices, predicting population isn't an exact science. But it's more exact. Think about how many millions of lives in Africa Mr. Gates' laudable humanitarian work will save. How many of those people will go on to have children and on.

The real environmental challenge of our age is partly how humans use resources and partly how many of them are doing it. The reality is we're strangling the earth with a population boom. Western leaders lack the vision and/or courage to acknowledge that fact and focus instead on the fossil fuel footprint per capita. But per capita reductions are wiped out when the total number of capita is increasingly so dramatically. In addition, as they move from agrarian to industrial economies, the countries in which they live will continue to use more oil. Sure, they may also drive electric vehicles, use more natural gas and all the rest of it, but they're still going to be using more oil. Recall the near straight line chart above showing how oil marches ever upwards.

Exxon Will Benefit from the Oil Price Recovery

Maybe oil prices will get higher tomorrow, maybe next week, maybe next month, maybe not for years. But in terms of supply and demand, demand is clearly set to keep increasing. However, there are now more supply constraints than there were.

During the pandemic and temporary slowdown in oil use, companies have cut way back on capex and the economic viability of some types of producer, such as north American fracking, has reduced such that there are cuts in supply which will never come back, while the medium-term replacement of depleted sources will be lower than was planned because of budget cuts. $85 billion of capex cuts had been announced in oil and gas by April. Since then, even Saudi Aramco (ARMCO) announced roughly a $25 billion capex cut. 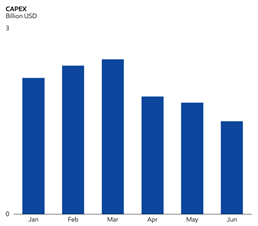 But the point remains; increasingly curtailed supply, meeting with rising demand, will lead to upward oil price moves. The capacity cuts in the market this year, including ones which can't be reversed in some cases, will help ensure a tighter supply environment in coming years which will help pricing.

Conclusion: Oil Prices Will Recover and Exxon's Share Price Will Do the Same

Oil demand moves inexorably upwards and it will continue to do so. Supply and capex cuts mean that there is a coming mismatch between supply and demand. That will push the oil price up again in the next several years. At that point, Exxon shares will recover. Having started this year at $70, they will easily get to $60, a 50% increase from today's price while earning a near 9% yield on a Dividend Aristocrat. I'm not saying Exxon is the best share to buy - it might not even be the best oil major share to buy - but it will get back to $60 in coming years.

Retirement Pot
1.7K Followers
I am a private investor based in the United Kingdom and most interested in equities in the U.K., U.S., Canada and Norway.
Follow

Disclosure: I am/we are long XOM, RDS. I wrote this article myself, and it expresses my own opinions. I am not receiving compensation for it (other than from Seeking Alpha). I have no business relationship with any company whose stock is mentioned in this article.