Here is the introduction from the BLS summary, which leads with the seasonally adjusted monthly data:

"The Consumer Price Index for All Urban Consumers (CPI-U) increased 0.4 percent in August on a seasonally adjusted basis after rising 0.6 percent in July, the U.S. Bureau of Labor Statistics reported today. Over the last 12 months, the all items index increased 1.3 percent before seasonal adjustment.

The monthly increase in the seasonally adjusted all items index was broad-based; a sharp rise in the used cars and trucks index was the largest factor, but the indexes for gasoline, shelter, recreation, and household furnishings and operations also contributed. The energy index rose 0.9 percent in August as the gasoline index rose 2.0 percent. The food index rose 0.1 percent in August after falling in July; an increase in the food away from home index more than offset a slight decline in the food at home index.

The index for all items less food and energy rose 0.4 percent in August after increasing 0.6 percent in July. The sharp rise in the index for used cars and trucks accounted for over 40 percent of the increase; the indexes for shelter, recreation, household furnishings and operations, apparel, motor vehicle insurance, and airline fares also rose. The indexes for education and personal care were among the few to decline.

Investing.com was looking for a 0.3% MoM change in seasonally adjusted Headline CPI and a 0.2% in Core CPI. Year-over-year forecasts were 0.8% for Headline and 1.1% for Core.

The first chart is an overlay of Headline CPI and Core CPI (the latter excludes Food and Energy) since the turn of the century. The highlighted two percent level is the Federal Reserve's Core inflation target for the CPI's cousin index, the BEA's Personal Consumption Expenditures (PCE) price index. 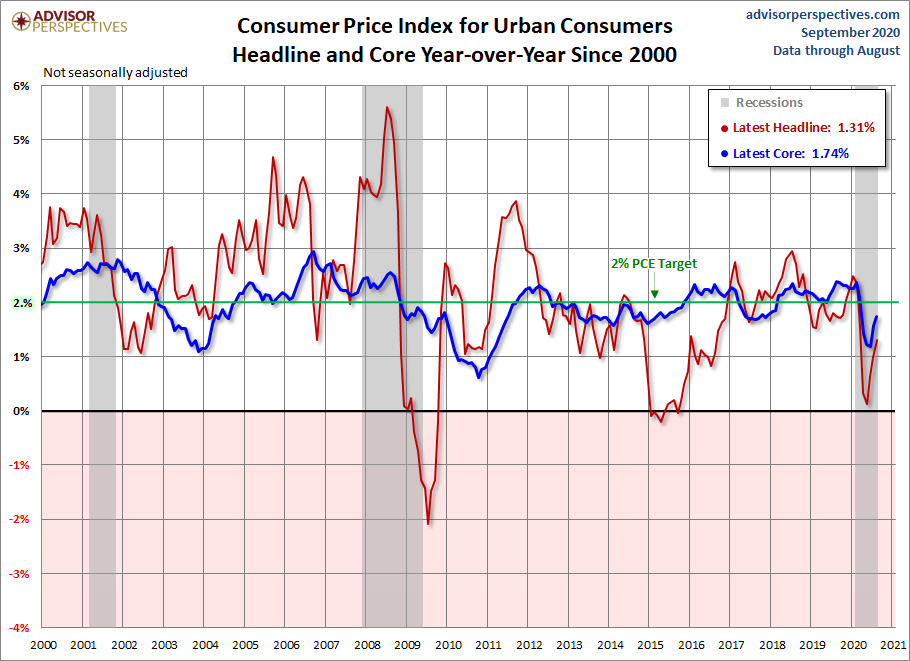 The next chart shows both series since 1957, the year the government first began tracking Core Inflation. 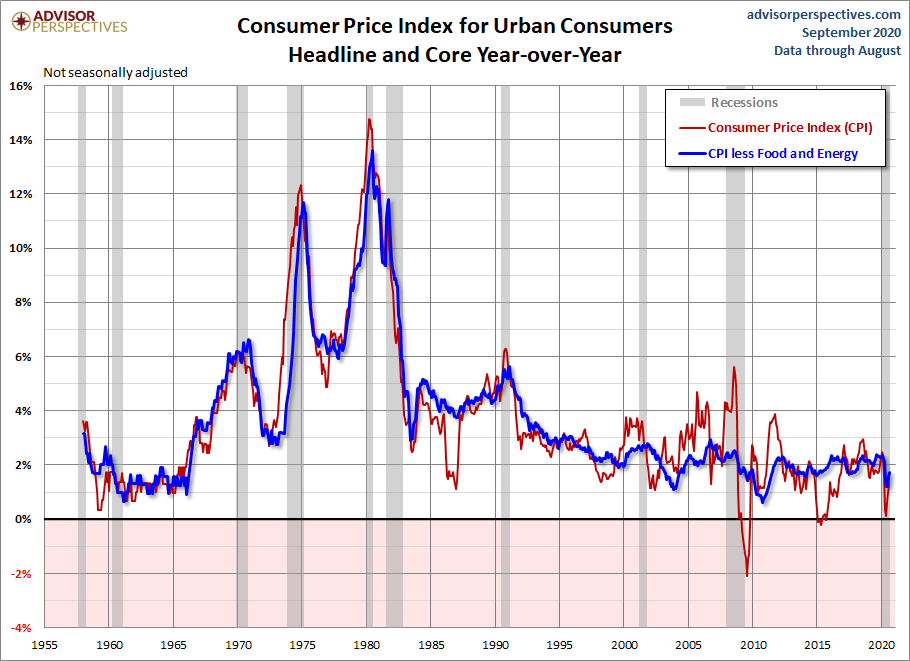 In the wake of the Great Recession, two percent has been the Fed's target for core inflation. However, at their December 2012 FOMC meeting, the inflation ceiling was raised to 2.5% while their accommodative measures (low Fed Funds Rate and quantitative easing) were in place. They have since reverted to the two percent target in their various FOMC documents.

Federal Reserve policy, which in recent history has focused on core inflation measured by the core PCE Price Index, will see that the more familiar core CPI is now at the PCE target range of 2 percent.