We find it hard to imagine a scenario in which gold underperforms U.S. stocks over the coming years.

We could easily see inflation rise to double-digit levels and the gold/SPX ratio double before policymakers are forced to undertake the austerity measures needed to restore economic and social stability.

We find it hard to imagine a scenario in which gold underperforms U.S. stocks over the coming years. The government's role in the economy and financial markets looks set to continue growing under either political party's leadership, which will put simultaneous downside pressure on real GDP growth and upside pressure on inflation. It will likely take much higher inflation before it becomes obvious that the government's growing role in the economy and markets is the cause of rather than the solution to economic stagnation. Until then we are likely to see gold continue to outperform stocks.

Over the long term, as the chart below shows, the ratio of gold to U.S. stocks has closely tracked the so-called misery index: the rate of inflation plus the unemployment rate. Amid the ongoing surge in U.S. money supply, many investors currently see stocks as a good hedge against inflation. However, history has clearly shown that stocks tend to perform very poorly during periods of rising inflation, while gold performs well. As the government and Federal Reserve increase their involvement in the economy in a bid to correct the problems that their involvement has created, stagflation and gold price outperformance awaits. 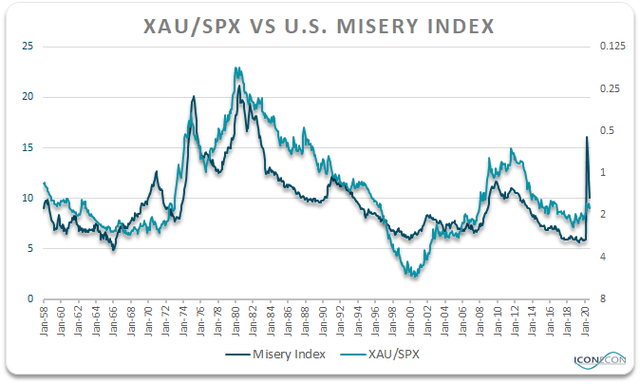 The diagram below is a summary of the forces that have been at play over the past 20 or so years and remain in play today. Rising government involvement in the economy in an effort to boost short-term growth and address inequality of outcome have led to increased dependence on ever greater government involvement. This trend appears to be gaining momentum and is unlikely to stop until society identifies that the policymakers' supposed economic cures are actually the disease. 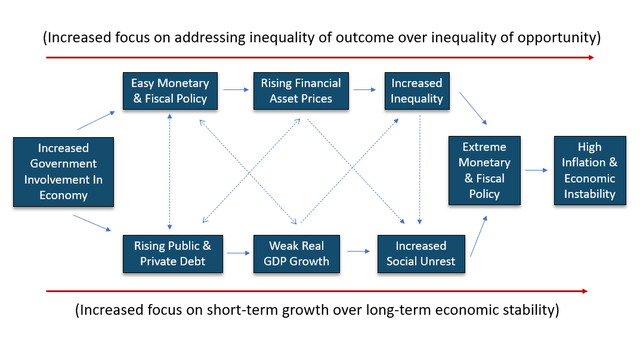 Beginning in the early-2000 we have seen a relentless rise in Federal government spending as a share of GDP, particularly on transfer payments. We have also seen a simultaneous decline in real interest rates as Fed policy has become increasingly short-termist. These two policy shifts have been closely linked. Low interest rates have facilitated high levels of government and private debt, which has in turn necessitated low interest rates in order to prevent surging interest costs.

The growing divergence between the real economy and asset prices has been met with increased monetary and fiscal stimulus measures. As asset prices have risen to extreme levels, policymakers have resorted to increasingly extreme policies in order to prevent a correction from leading to a financial crisis. Meanwhile, voters, increasingly unaware of the virtues of capitalism and educated in Keynesian economics, have eschewed fiscal austerity and politicians have been quick to give voters what they want. Low levels of consumer price inflation have given the green light to policymakers to continue easing.

As efforts to prevent near-term economic weakness and reduce inequality of outcome have ramped up, inequality of opportunity has risen, as has a sense of resentment towards the economic system. Property prices have become unaffordable for many young people, preventing them from gaining a stake in the economy, while the least educated have been sucked into the welfare trap by high minimum wage regulations and high marginal tax rates. Furthermore, as government spending has been increasingly funded by money printing rather than tax revenues, the concept of scarcity has been undermined and many voters now see any reluctance on behalf of any political party to increase social spending as immoral.

It is difficult to see a shift in this trend until price pressures rise considerably. Our sense is that Jerome Powell's willingness to allow considerably higher inflation reflects the Fed's expectations of higher inflation and is a means of allowing them to continue to monetize government debt without losing credibility. We could easily see inflation rise to double-digit levels and the gold/SPX ratio double and triple before policymakers are forced to undertake austerity measures. Only then would it become clear to a critical mass of voters that reduced government involvement in the economy is needed to foster sustainable economic growth and social stability.

Disclosure: I am/we are long XAUUSD:CUR. I wrote this article myself, and it expresses my own opinions. I am not receiving compensation for it (other than from Seeking Alpha). I have no business relationship with any company whose stock is mentioned in this article.

Follow Stuart Allsopp and get email alerts
+
Add a comment
Disagree with this article? Submit your own.
To report a factual error in this article, click here.
Your feedback matters to us!