American Finance Trust (AFIN) is an American REIT focusing on operating single-tenant and multi-tenant retail properties. Approximately 63% of the single-tenant portfolio is leased out to investment-grade tenants (for instance Home Depot (HD) or Lowe's (LOW)), while the top-10 of the tenants (representing about 40% of the rental income) contain some very robust names: 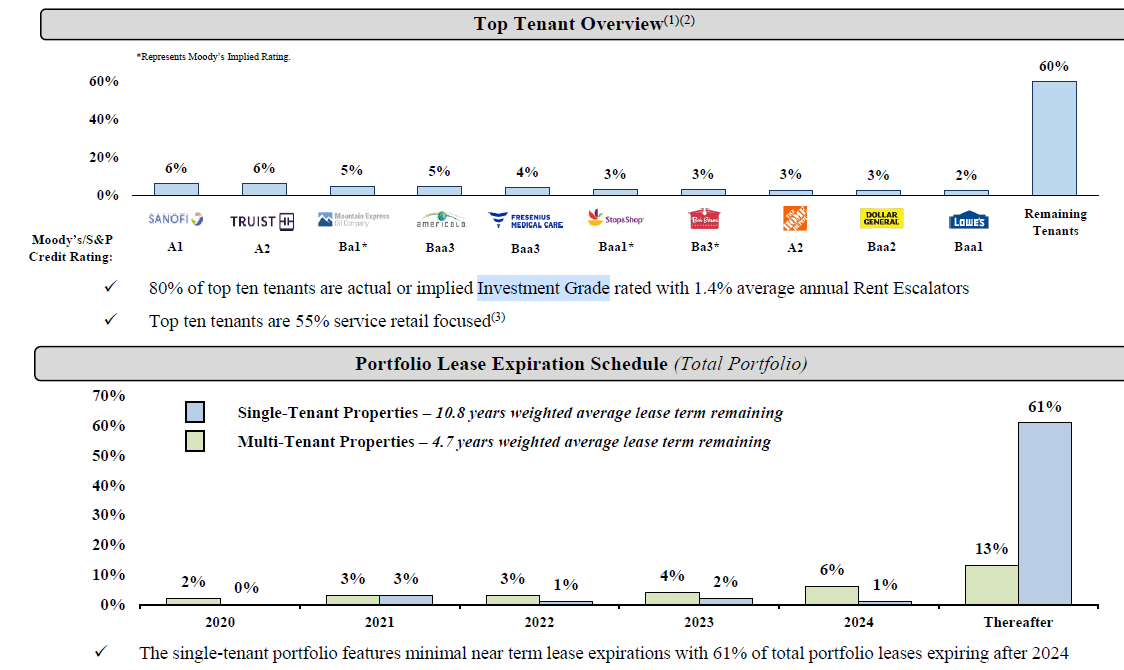 The REIT's share price has been slipping lately, and the market is clearly concerned about the sustainability of the already reduced dividend yield as the dividend wasn't fully covered in Q2. However, American Finance is on the verge of fully covering the dividend, and its main focus should now be on collecting deferred rent.

What really matters to real estate companies and its investors are the AFFO and FFO. So rather than discussing the income statement in detail, it's a much more useful exercise to have a look at the FFO and AFFO calculations. 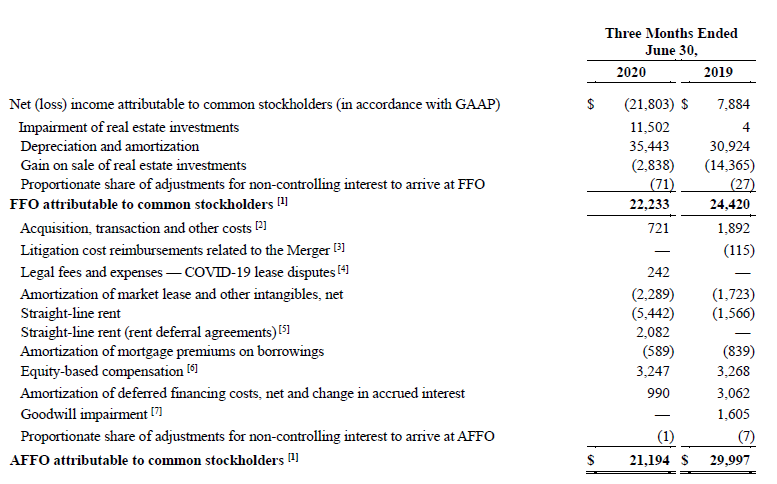 In the second quarter, which we should reasonably expect to be the worst quarter of the year for American Finance Trust, the company recorded an FFO of $22.2M and an AFFO of $21.2M. Considering the current share count is 108.5M shares, this represents an FFO/share of $0.205 and $0.195/share respectively. On an annualized basis, the AFFO/share would be roughly $0.78/share which makes the current share price of just over $6.6 cheap.

But, of course, there's more to it than just simply extrapolating a quarterly result, and although FFOs and AFFOs are important, they have the net income (in this case the net loss) as starting point. Looking at the income statement, most of the expenses appear to be quite reasonable. Sure, G&A increased a little bit during the second quarter, but the interest expenses decreased, so all things considered, there are no substantial additional cost savings possible based on the Q2 results. 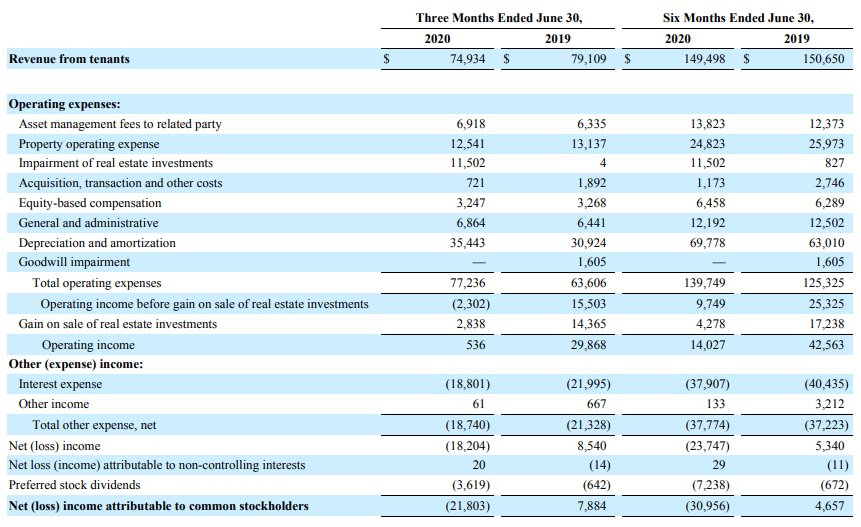 That being said, we should keep in mind the total amount of receivables has increased by about $8M during the second quarter. This means the $8M is included in the rental income and in the FFO, but hasn't been paid yet by the tenants. This still is a risk factor, but considering the rent collection rate is increasing, I am optimistic most of these receivables will indeed be paid. But this factor very likely explains why American Finance Trust is trading at just over 8 times its AFFO. We also shouldn't be too nervous about these deferrals as AFIN agrees to these deferrals in return for a lease extension. In the second quarter, American Finance Trust agreed to an average rent deferral of four months in return for those tenants signing a lease extension of - on average - 36 months.

I'm also not too concerned about the balance sheet. The total debt on the balance sheet is approximately $1.81B (for a net debt of $1.68B after deducting the almost $140M in cash on the bank), and although the book value of the real estate is just $3.3B, this includes almost $600M of accumulated depreciation. And given the straight line rental income of $272M, the yield on investment of 7% indicates the $3.9B original book value is very reasonable, and we should use that amount to determine the LTV ratio (which would be around 43%). 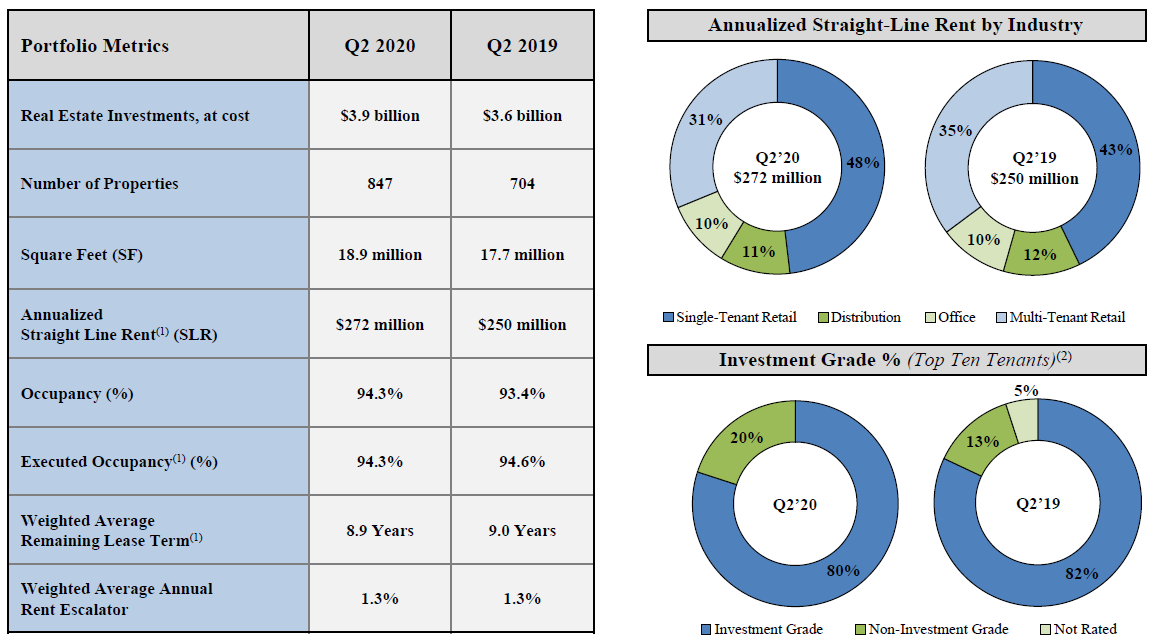 With an occupancy of around 94% and a weighted average lease term of almost nine years, American Finance Trust is in a good shape, and it can now focus on improving the dividend coverage.

The dividend wasn't fully covered but probably will be

But as you have read above, the AFFO/share in Q2 was just $0.195, which means the Q2 dividend of 3 times 7.083 cents = $0.2125 was not fully covered. And this very likely is another reason why the share price of this REIT has been performing very weak lately; it looks like the market is expecting another dividend cut.

However, the recently announced debt refinancing will also provide a boost to the FFO and AFFO as we can reasonably expect the interest expenses to decrease. In a first move in July, AFIN entered into a transaction with a lender to create a $715M CMBS with a 3.74% coupon, down from 4.36%. This 0.62% interest decrease could save the company about $4M per year. In a second, separate transaction, it renegotiated an existing loan with Bank of Texas where a $125M loan saw its interest rate reduced from 5.16% to 3.22%. This will save the REIT an additional $2.4M per year.

Both refinancings will save AFIN about $6.4M per year and have the potential to add almost $0.06 per share per year to the FFO and AFFO. And this could indicate the dividend will be fully covered from now on.

Additionally, AFIN has provided updates on the rent collection results: As of September 3rd, about 90% of the rents due for August were effectively received. That's a substantial increase compared to the 84% collection rate in the second quarter. Of the remaining 16% due in Q2, 10% has been approved for deferral while tenants representing another 5% of the rent due are actively negotiating a deferral agreement with AFIN. It's really just 1% of the Q2 rent that could be considered at a default. The higher rent collection won't have an impact on the FFO and AFFO (as deferred rent is already included in these results), but higher rent collections indicate a higher confidence level of the tenants which reduces the risk of defaulting on the agreed-upon rent deferrals.

And finally, the acquisitions completed during the first half of the year will start to contribute as well. With an average capitalization rate of in excess of 8%, I expect the Q2 acquisitions to boost the Q3 FFO by about 1%.

While American Finance Trust is taking the necessary steps (lower-cost debt, higher rent collection) to boost its FFO and AFFO to make its reduced dividend sustainable, this doesn't mean the REIT is out of the woods just yet. Although the dividend will probably be covered from this quarter on, I think AFIN should consider one additional cut to ensure the dividends remain covered, even if one would subtract the deferred rental income from the AFFO.

I think the market would be very forgiving for another dividend cut and it may not be a bad idea to reduce the monthly payout to $0.05 as this would save an additional $27M per year. And a cut wouldn't have to be eternal: American Finance Trust could easily reduce the monthly dividend now while promising to make up for the reduction with a special dividend payable in 2021 upon effectively receiving the deferred rents.

I currently have no position in American Finance Trust, but I am encouraged by the balance sheet strength, the 90% rent collection rate and the almost nine-year WALT, so I may initiate a speculative long position soon. It will remain a speculative position as long as the dividend isn't fully covered.

The Investment Doctor
17.42K Followers
Author of European Small-Cap Ideas
We zoom in on capital gains and dividend income in European small-caps
As I'm a long-term investor, I'll highlight some stockpicks which will have a 5-7 year investment horizon. As I strongly believe a portfolio should consist of a mixture of dividend-paying stocks and growth stocks, my articles will reflect my thoughts on this mixture.

Disclosure: I/we have no positions in any stocks mentioned, but may initiate a long position in AFIN over the next 72 hours. I wrote this article myself, and it expresses my own opinions. I am not receiving compensation for it (other than from Seeking Alpha). I have no business relationship with any company whose stock is mentioned in this article.