In this article I will walk you through the commonly used but wrong way to think about volatility decay.

We'll then walk through an example of volatility decay with realistic numbers.

We'll compare the model with back-test simulations done on portfoliovisualizer.com.

The Wrong Story About Volatility Drag

On SeekingAlpha and various other financial forums, whenever leveraged funds are mentioned, the concept of "daily decay" of the funds is sure to be mentioned. Just what do we mean by "decay"? Let's walk through the classic example:

(For the sake of simplicity let's just assume that the margin debt is interest-free, and the stock is dividend-free. Given current market conditions it's a reasonable assumption.)

The fund must rebalance its assets to maintain its leverage ratio. So, it pays down $10 of its excess debt by selling $10 of stock, and now its balance sheet includes $180 of stock, and $90 of debt, netting to $90 of equity.

What's the problem with this storyline? Does the stock market typically go down 5% on one day, and then go up 5.26% on the next day? Absolutely not. Just how absurd was this example? Let's walk through some numbers.

So, a 5% move in a single day is a 6.37 standard deviation event, which is a near zero-probability event. The more mathematically astute reader might object: but stock returns are heavy-tailed, how about we see some real data?

This link (Average Daily Percent Move Of The Stock Market: S&P Volatility Returns) nicely shows the distribution of S&P 500 moves in a 10-year period. Just based on the helpful graphic, we can conclude that a 5% move (either up or down) in a single day happens with a less than 1% probability.

Should we judge leveraged funds, based on a single example, based on an event with a less than 1% chance of happening, as though it happens on a daily basis? Absolutely not.

Since we want to know how a leverage fund behaves on a typical day, let's assume that the S&P 500 moves up or down each day by exactly 0.7851%, which is exactly 1 standard deviation of volatility.

Just how many more up than down motions are needed to deliver the average annual return of approximately 8.00% on the SPX?

We'll need to set up an ugly equation (where n is the number of up days) & solve it. Fortunately we can use computers, so I'll just show you the equation and the final result:

Let's move on to the leveraged fund. Since the 2x levered fund's daily movements are by definition twice as extreme, we simply need to include a factor of two into our last equation to be able to use it to calculate the expected returns on a leveraged fund after volatility decay:

Our annual expected leveraged return after volatility decay is 14.37%/year! If in theory you could earn 16%/year on a 2x levered investment, this means that 2x leveraged funds suffer from about 1.63%/year of lost returns because of volatility drag.

What If We Put Dividends & Margin Interest Back In?

The SPX's historical return has been around 8.00%. If we add in an estimated dividend yield of 2%, we get an expected return of 10%/year on an unleveraged S&P500 fund.

Our 2x levered fund would be a bit messier. Let's assume for the sake of simplicity that the dividends received from the entire stock holding and the cost of carrying the margin loan cancel each other out. Given current conditions, the dividend yield on the SPY is about 1.9%. This would suggest that the interest rate on the margin loan is about 3.8% - I think reasonable numbers. This would mean that our previously calculated number of 14.37%/year should hold.

How About 3x Leveraged Funds?

Since the daily movements of a 3x levered fund are by definition 3x those of the underlying asset, we can still use our old equation, swapping all the 2's with 3's:

This suggests that a 3x leveraged fund can achieve an expected annual return of 18.224%. Since without volatility drag, simply tripling the 8.00%/yr return on the SPX yields 24%, we can suggest that the volatility drag on a 3x portfolio is about 5.78%/year of lost return.

Again, we'll assume that margin interest & dividends from the underlying roughly cancel each other out, just to get a first estimate. (VFINX) is a Vanguard S&P 500 mutual fund, while (VFISX) is a Vanguard short-term Treasury fund.

Below is a portfoliovisualizer.com run on each of the following simulated strategies starting from 1992 and running up to the present: 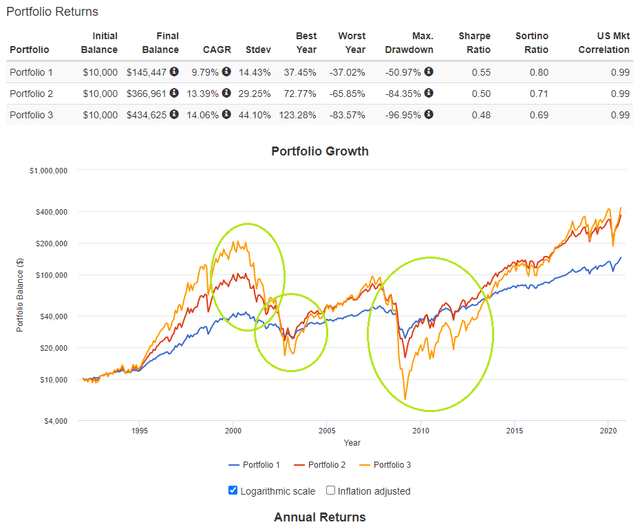 Clearly, something is wrong with the pure theory - somewhere along the way, an assumption was wrong. Which one? Hmm...

Hence, our model based on 1-standard deviation moves actually underestimated volatility decay. If you thought that a modeled decay of 5.78%/year on a 3x leverage was bad enough, reality is actually even worse.

Follow Michael Z. Yu and get email alerts
+
Add a comment
Disagree with this article? Submit your own.
To report a factual error in this article, click here.
Your feedback matters to us!