While it would be difficult for the Fed to ease financial conditions by lowering Treasury rates further, there remains substantial room within the agency MBS market to narrow spreads.

We believe the Fed's continued purchases remain a necessary and powerful tool to normalize this relationship and allow a seamless transmission mechanism of monetary policy to occur.

The U.S. Federal Reserve announced on 16 September it would continue its current mortgage and Treasury purchase programs and keep the federal funds rate on hold until inflation sustainably exceeds its 2% target - all keys to containing interest rates at very low levels. The bond-buying programs began in mid-March as the central bank took unprecedented steps to shore up the most liquid markets and thereafter support subdued economic activity amid the pandemic-driven recession.

To date, the Fed has purchased more than $3 trillion in U.S. Treasuries and $1 trillion in agency mortgage-backed securities (MBS), and Wednesday's meeting reaffirmed its commitment to continue purchasing $80 billion in U.S. Treasuries and $40 billion in agency MBS (net of reinvestments) per month for the foreseeable future. The Fed and market participants have debated whether it should simply choose one tool or another and if the time to slow the pace of purchases has arrived. In our view, each of these tools helps the Fed satisfy its dual mandate of price stability and full employment by supporting fiscal policies and moving investors out the risk spectrum (for background on the risk spectrum since the COVID crisis began, read "A Phased Market Recovery as Liquidity and Fundamentals Return"). Therefore, we believe the Fed was right to continue both Treasury and MBS purchases.

While it would be difficult for the Fed to ease financial conditions by lowering Treasury rates further, there remains substantial room within the agency MBS market to narrow spreads. Indeed, MBS purchases remain an important tool within the Fed's toolkit, and we believe the purchases should continue as long as the Fed wants to expand its balance sheet and bolster economic activity via the housing market. If the Fed were to purchase Treasuries without also buying MBS, Treasury rates could stay low while mortgage rates could come down much less, or even move higher. (Recall that before March, the Fed was buying U.S. Treasuries and selling MBS, widening spreads and raising mortgage rates.)

The room for improvement in the spread can be seen clearly within Figure 1, which compares the 30-year mortgage rate to the 10-year Treasury rate. For the most part, the fall in Treasury rates has not been passed on to homeowners; however, we are seeing this spread decline with each passing month the Fed remains involved, and more can be done. Additional incremental Fed purchases of MBS would send a strong signal to markets and could lower mortgage rates more quickly, accelerating the timeline of getting lower mortgage rates to homeowners. 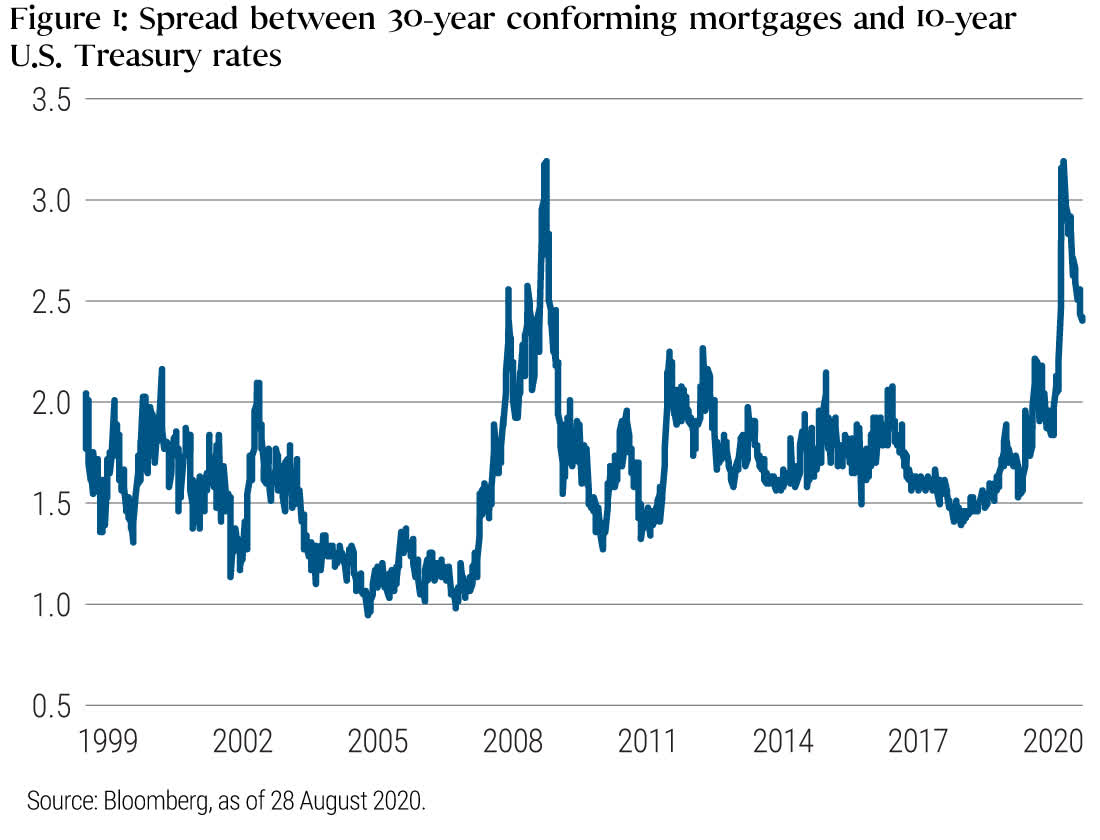 Lower mortgage rates should allow more people with higher mortgage rates to refinance and more people who are uneconomically renting the opportunity to buy a home (see Figure 2). While a refinancing wave began in late March, it has been gradual. Currently, less than 4% of homeowners have mortgages at today's rates. Fed participation for the foreseeable future would allow originators to expand capacity, eventually allowing for the possibility to lower mortgage rates further and granting millions access to those low rates. 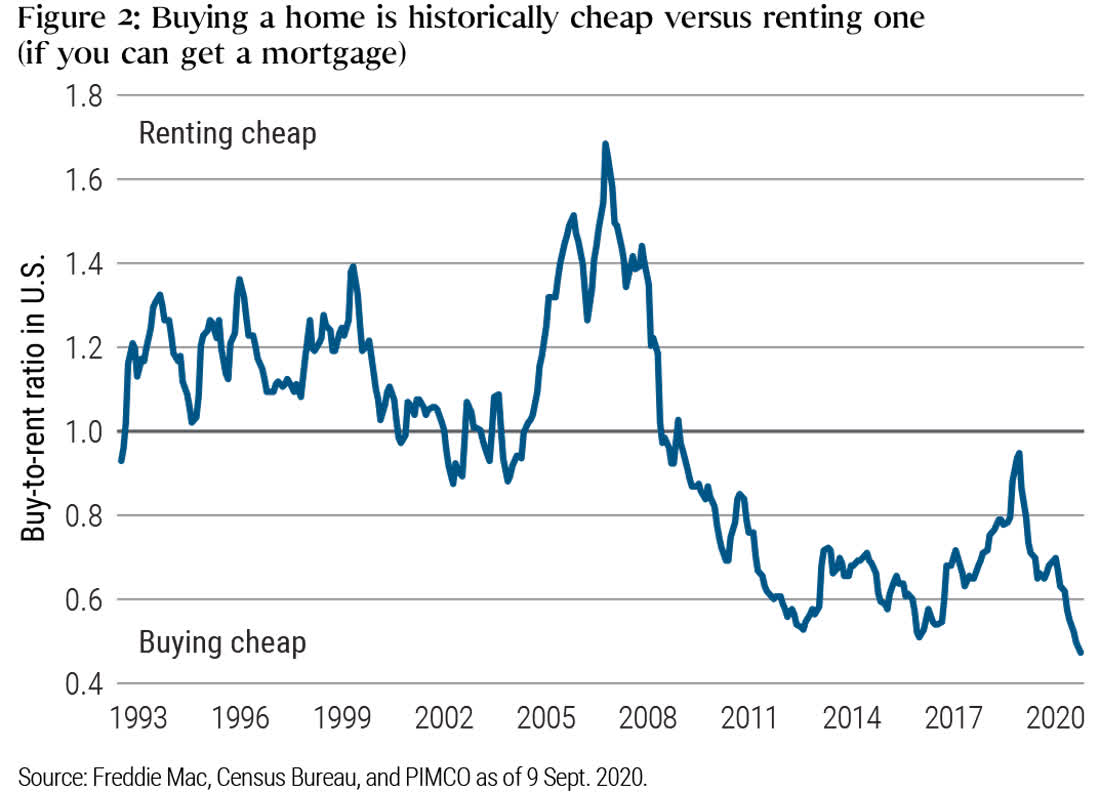 Over long periods of time, mortgage rates relative to Treasury rates tend to stabilize, but in any given period of time this relationship can dislocate. We believe the Fed's continued purchases remain a necessary and powerful tool to normalize this relationship and allow a seamless transmission mechanism of monetary policy to occur.

All investments contain risk and may lose value. This material is intended for informational purposes only. Forecasts, estimates and certain information contained herein are based upon proprietary research and should not be considered as investment advice or a recommendation of any particular security, strategy or investment product. No part of this material may be reproduced in any form, or referred to in any other publication, without express written permission. PIMCO is a trademark of Allianz Asset Management of America L.P. in the United States and throughout the world. THE NEW NEUTRAL is a trademark of Pacific Investment Management Company LLC in the United States and throughout the world. ©2020, PIMCO

Follow PIMCO and get email alerts
+
Add a comment
Disagree with this article? Submit your own.
To report a factual error in this article, click here.
Your feedback matters to us!