The bulls produced a "good overbought" condition that lasted 2 months.

Now the bears have produced an oversold condition.

The question is which team will win the current battle.

This morning we go looking for clues.

After the bulls were able to produce a "good overbought" condition that lasted two full months on the back of the reopening trade and an improving economy, the bears finally found a way to get up off the mat and push the market into an oversold condition - for the first time since late March. As you are likely aware, the recent weakness in the market appears to be related to the combination of fears over the state of the global economic recovery, an eye-popping increase in COVID cases (apparently triggered by schools reopening), and the latest political battle, which looks like it could derail additional fiscal stimulus - something that both Jay Powell and Steven Mnuchin have told Congress the economy is going to need. (Perhaps badly.) As such, a correction has ensued, which wasn't exactly surprising given the torrid gains in the market darlings seen in August. So, with the market oversold and sentiment starting to tip toward outright negativity, the question of the day is if the recent decline was "enough."

Frankly, one can never know the answer to such a question without a healthy dose of hindsight. But we can play detective and hunt around for clues. For me, the first clue is this week's market action. So far at least, the bulls look to have put in a stop. Next, the charts of some of the megacap leaders have pulled back enough (in my humble opinion, of course) to make them "buyable" again. (See this week's upgrade of AMZN.) Finally, it looks like the market might be oversold enough and sentiment might be getting negative enough for the bulls to attempt a run at the upper end of the range. But... Based on this morning's early action, the bears don't appear to be throwing in the towel just yet. And from my perch, it looks like the battle for the next intermediate-term move has yet to be resolved. As such, we will continue to monitor the intraday action in the market and watch the key support zones.

Now let's take a look at our Early Warning board for additional clues about the near-term action...

The State of the "Early Warning" Indicators

The Early Warning board upticked a bit this week as the Short-Term Overbought/Sold (i.e. the stochastics) and sentiment indicators have flashed buy signals. However, the Intermediate-Term VIX indicator slipped to neutral. So, while it appears that the bulls may be in the process of "setting the table" for their team, the board doesn't look to be there just yet. This suggests that we could easily see some additional waffling and/or downside testing before the bulls can take control of the game again. We'll see. 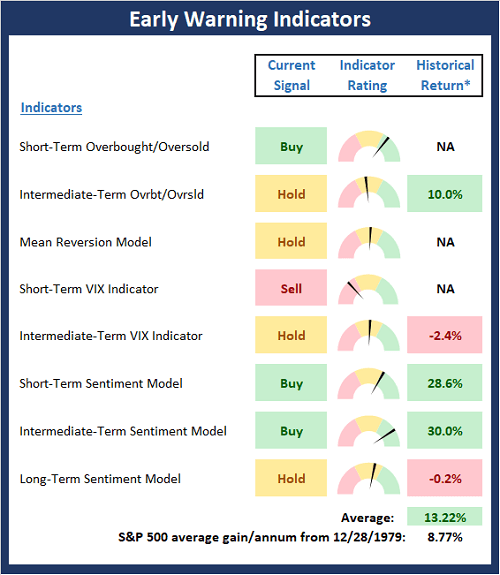 * Source: Ned Davis Research (NDR) as of the date of publication. Historical returns are hypothetical average annual performances calculated by NDR. Past performances do not guarantee future results or profitability - NOT INDIVIDUAL INVESTMENT ADVICE.

As I mentioned above, the stochastic indicator shown on the chart below recently flashed a buy signal. But then that signal was quickly reversed. And then... It reversed again - this time back to the buy side. And this morning's sloppy action appears to be causing the indicator to lean toward yet another flip-flop. Such is the way it goes when the teams are duking it out such as the look to be doing now. From my seat, as long as the bulls can hold above Monday's low in the 3230 zone on the S&P 500 cash index, I can argue that the bulls have held their ground. But again, if they fail here, we should probably expect a test of the 200-day down at 3105. So, stick around, this is definitely getting interesting. 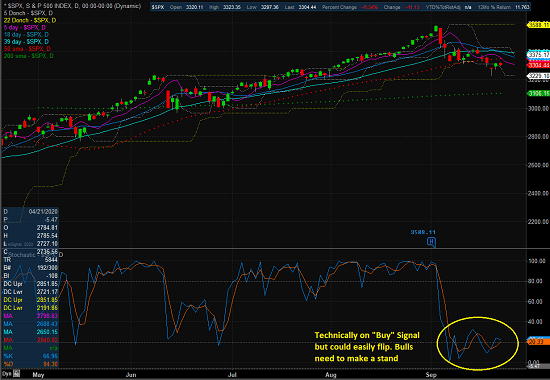 Publishing Note: I am traveling the rest of the week and will not publish a report until Monday. Have a GREAT weekend!

Regardless of the colors on the screens, you can always decide to enjoy your day!

Follow David Moenning and get email alerts
+
Add a comment
Disagree with this article? Submit your own.
To report a factual error in this article, click here.
Your feedback matters to us!