Exxon Mobil (NYSE:XOM) is the U.S. symbol of the oil & gas industry. This sentence by itself is enough to discourage almost all investors from even considering investing in the business. However, as we all know, not everything in life is black and white and as much as we all want to drive electric cars, use electricity from solar panels, and recycle 100% of our garbage, this transition can't happen in a blink of an eye.

Moreover, even the most environmentally-friendly future we could imagine would still be powered by hydrogen, natural gas and nuclear energy. That is why, as much as we condemn oil and gas giants such as XOM, it is exactly these companies that we as a society would require in order to make a smooth transition into a more environmentally-friendly society.

Even as renewable energy quickly catches up, in a society where energy consumption is bound to increase, the future of energy over the next 80 years would most likely look something like this. 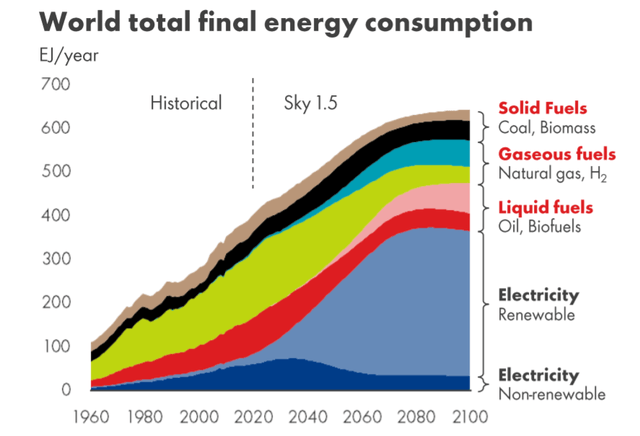 Although investments in solar and wind have led to a boom in the renewable energy, petroleum and natural gas still take the lion's share of U.S. energy consumption. 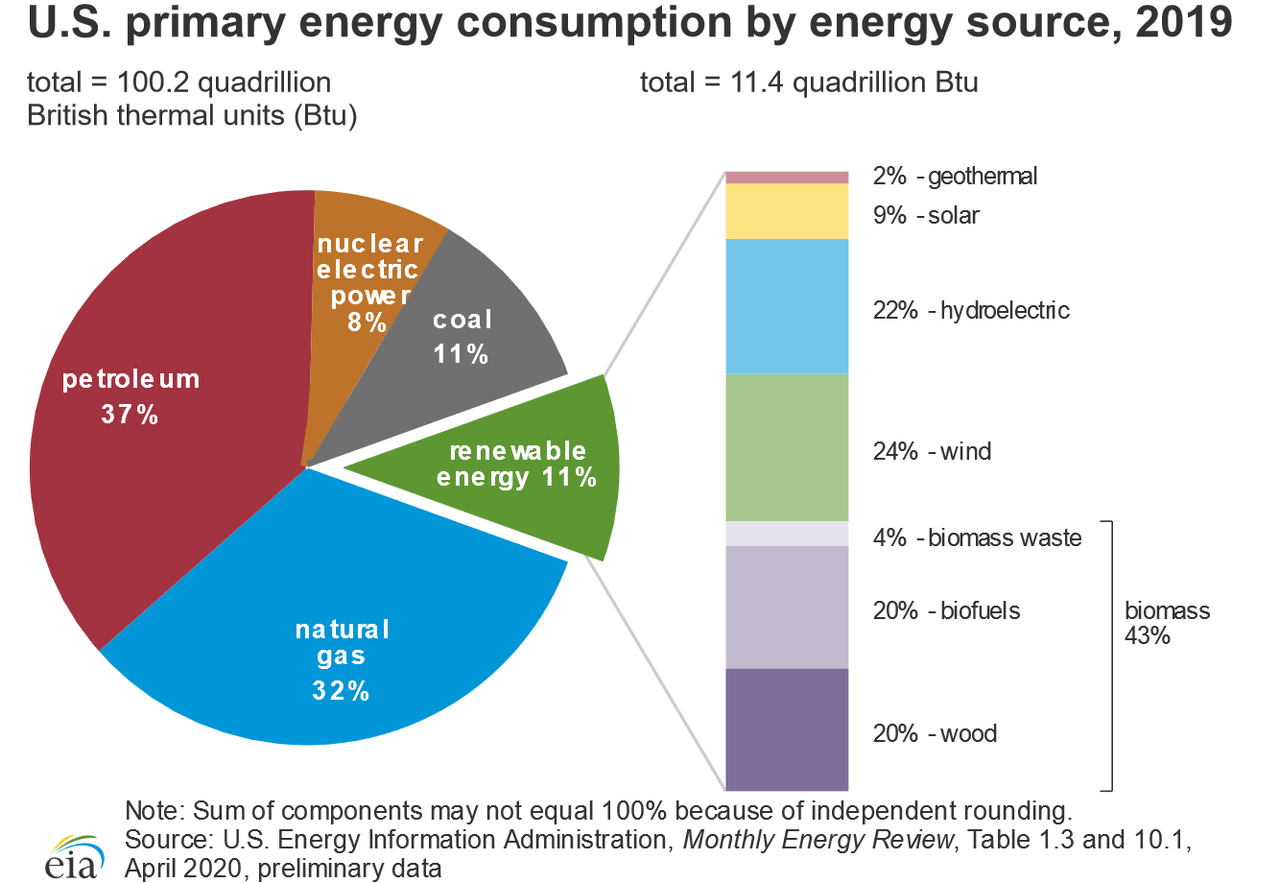 According to the latest projections, natural gas and crude oil would remain key energy sources in the U.S. for the foreseeable future. 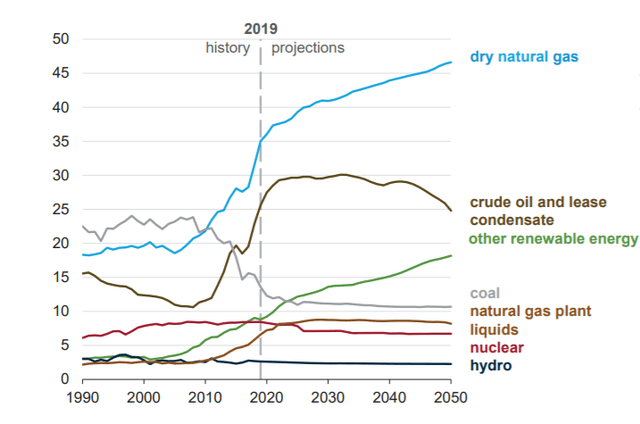 Even if this does not optimal for the environment, the situation in the world's second largest economy - China look even worse.

Although crude oil & natural gas are not going away anytime soon, the sector is highly cyclical and thus presents an opportunity for long-term-oriented investors as prices reached record low levels on the back of global overcapacity, which reached extreme levels during the pandemic.

we've never seen the market demand crash so far, so deep. We've never seen prices and margins crash so much, and that's why having a strong balance sheet is so important

The deal is “a bet that the future doesn’t come as fast as some people think,” said Jim Shanahan, an analyst who covers Buffett’s Berkshire Hathaway Inc. at Edward Jones. “I think they want to be bigger in renewables, but it’s going to take time. In the meantime, they have to be able to provide power generation to their customers.”

Shell is exploring ways to reduce spending on oil and gas production, its largest division known as upstream, by 30% to 40% through cuts in operating costs and capital spending on new projects, two sources involved with the review told Reuters.

This justifies BP’s plan to lower oil and gas output by 40% over the next 10 years while investing as much as $5 billion a year in renewables.

Not only will this be good for the environment as more money will pour into renewable energy, but also it means less competition in the oil & gas sector. That will imminently lead to lower supply in the future, which coupled with higher energy demand would most likely generate significantly higher returns on capital invested in oil & gas projects in the future.

In addition to the strong competitive advantages that large integrated oil & gas companies have and the higher future expected returns, investments in the sector are also incredibly cheap.

Exxon Mobil and the oil & gas sector as a whole plunged by almost half over the past 10 years, with the gap between the energy sector and the S&P 500 reaching even more extreme levels during the pandemic.

Although it makes sense that the heavy technology-weighted S&P 500 index should outperform the capital-intensive energy sector, the question is just how much is too much. With emotions raging high in the exciting technology names and pessimism in the oil & gas sector also near all-time highs, it is much more likely that the gap between the two sectors is already reaching its peak levels than not.

Exxon Mobil, for example, now trades below its book value of equity and at a P/E ratio of 20x, in spite of the record low EPS brought by the all-time low oil prices.

What is interesting to note is that back in 2017 when XOM EPS reached its bottom levels, the company's P/E ratio skyrocketed to above 40x on the expectations that the oil prices will eventually recover and so they did. This time however, as XOM EPS once again reached similar levels, there are no expectations for a recovery.

This, in my opinion, presents an opportunity for long-term-oriented investors and has certainly made XOM a classic value play in a cyclical industry that has had one of its worst blows in a very long time. With that in mind, it is also worth bearing in mind that the growth vs. value trend is approaching unsustainable level that last time reversed rather quickly.

The crucial point for any large economy energy sector has reached its all-time lows as a share within the S&P 500 index, a trend that could easily reverse if globalization trend changes.

Finally, as I have recently covered in my analysis of Salesforce's (CRM) inclusion in the Dow Jones index and Exxon's exclusion from it, there is a very strong historical evidence which suggests that the latter would most likely significantly outperform the market in the future.

If you haven't already read this analysis, I would strongly recommend that you do so, as decisions to include/exclude a certain stock from popular indices have important implications for shareholders.

There are three reasons why I would consider Exxon Mobil as the best company of choice to take advantage of the trends described above.

Firstly, large integrated oil & gas companies are the best positioned to take advantage of this trend as large scale is required to drive economies of scale and achieve the necessary operational efficiencies. Also the largest players in the sector would be the only ones capable of investing in the large and most profitable projects in the space.

Secondly, low debt levels, high interest coverage and strong balance sheet are crucial as the current downturn in the sector could last longer than expected. Thus, the most financially stable businesses have the best chances to survive the longest and benefit from the low levels of competition in the future.

Here, both Exxon Mobil and Chevron (CVX) stand out with the highest interest coverage and lowest debt levels.

Exxon Mobil's management has also highlighted the company's strong balance sheet and financial capacity as their critical competitive advantage that gives them the ability to continue to invest across the commodity price cycles. 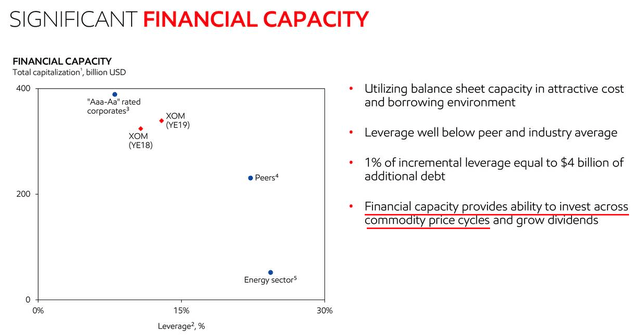 Investing through the cycle

As oil prices collapsed in 2014, both XOM and CVX were forced to cut their Capex below the sustainable level of the depreciation and amortization expense (D&A).

However, XOM has recently dialed up its capital expenditure above 100% of its D&A expense. A move that led to depressed free cash flow levels and the need to increase borrowing, but would give XOM a better project pipeline once oil prices recover.

It is exactly this recent higher spending on Capex, which resulted in Exxon Mobil's worst share price performance and led to its exclusion from the Dow Jones index, while Chevron has kept its place (for now).

The final reason why I would consider Exxon Mobil is the company's low valuation, in spite of its strong financial standing.

Exxon Mobil now trades below its book value of equity and below the P/B of Chevron, while at the same time having higher operating profitability.

In terms of free cash flow on a trailing twelve-month basis, XOM trades at a Free Cash Flow Yield of -1.1% which makes it look worse than Chevron, which has an FCF yield of 3.9%.

However, as I mentioned earlier, XOM has dialed up significantly its Capex over the recent years with a ratio of Capex/D&A Expense of 118% over the last twelve months, compared to only 61% for Chevron.

Thus, if XOM was as aggressive as Chevron in its Capex reduction and spent only 61% of its Depreciation & Amortization Expense, it would have achieved an FCF Yield of 6.3%.

Finally, Exxon's dividend, which although would most likely be cut in the future, still appears much safer than that of Chevron, which has once again plunged into net loss territory.

As far as cash flow is concerned, cumulatively over the past 10 years, XOM has returned much more cash to shareholders relative to its total cash inflow while also reinvesting in the business.

On the cash inflow side, many people point out Exxon's recent debt issuance to cover its dividend which is true over the past 12 months. However, as I noted earlier, the company is still one of the most financially stable businesses in the peer group which allows it to sustain this trend over the short term.

Although the share of renewable energy is bound to increase over the coming decades, investments in less-polluting energy sources by the large oil & gas companies are also crucial if we both care about the environment and want to keep the lights on. In addition to less-polluting natural gas, Exxon Mobil is also investing in biofuels, carbon capture technologies and hydrogen.

Thus, the cyclical downturn in oil & gas prices presents an opportunity for long-term-oriented investors as XOM's valuation fell to levels last seen in 2003. At the same time, XOM is one of the most financially-sound entities in the sector, has continued to invest heavily through the bottom of the cycle and has the scale necessary to bring new technologies to life.

Disclosure: I/we have no positions in any stocks mentioned, but may initiate a long position in XOM over the next 72 hours. I wrote this article myself, and it expresses my own opinions. I am not receiving compensation for it (other than from Seeking Alpha). I have no business relationship with any company whose stock is mentioned in this article.

Additional disclosure: Please do your own due diligence and consult with your financial advisor, if you have one, before making any investment decisions. The author is not acting in an investment adviser capacity. The author's opinions expressed herein address only select aspects of potential investment in securities of the companies mentioned and cannot be a substitute for comprehensive investment analysis. The author recommends that potential and existing investors conduct thorough investment research of their own, including detailed review of the companies' SEC filings. Any opinions or estimates constitute the author's best judgment as of the date of publication and are subject to change without notice.