The gold markets are widely misunderstood and deeply emotional. Conspiracy theories abound. That's why I like to boil it down to simple supply and demand for the precious metal with an analysis of global monetary policy. 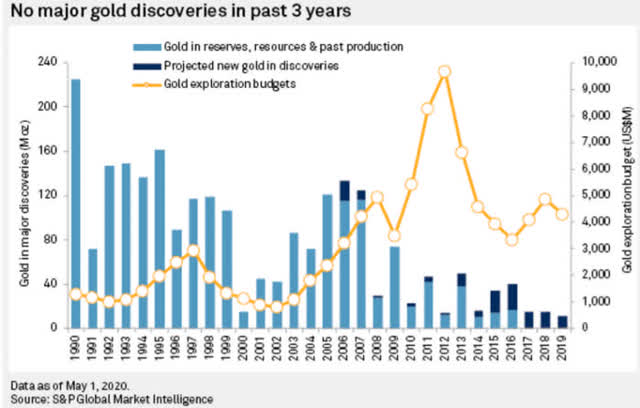 There are two core reasons for the drop in discoveries. The first is that there's just less gold to discover. The second is that gold miners have become very disciplined since the 2012 bust with exploration spending.

While there certainly are other gold deposits to be discovered, it's clear that the world is past peak gold production growth. This will make it harder on miners as costs rise to find the next ounce.

The Shift From Gold Miners To Gold Ownership

In my February article Massive 2020s Gold And Gold Stock Bull Market Is Just Beginning, I discussed that gold miners would lead the gains compared to gold. The logic was simple: As gold prices rose, the leverage of the miners would yield bigger gains than the actual rise in gold prices.

That's now about to even out as many gold stocks have more than doubled recently and are up far more from decade lows. While still levered to rising gold prices, miners have reached the point where more production will cost more money. The miners have not run into diminishing marginal returns yet, but they are approaching that point and the market knows it.

Our top gold stock holding, Newmont Corporation (NEM), has doubled since we bought it on its merger with Gold Corp last year. While I expect Newmont to beat the S&P 500 (SPY) over the course of the decade, I think it's a horse race whether it beats the appreciation in gold.

Our top gold ETF holding, the VanEck Gold Miners ETF (GDX), also has run up since my buy alert that I gave while being interviewed by Forex Analytix on March 16. Those who bought that day under $20 per share have been rewarded with a double as well. The Forex Analytix interview is an important one as I discuss the economy, coronavirus, oil and gold (in the last few minutes I call $3,000 per ounce on gold and tell people to buy GDX that day):

As a result of the run up of gold stock prices, I'm now moving to equalize my gold holdings with my gold stock holdings. I'm doing this by accumulating a larger position in the SPDR Gold ETF (GLD) and reducing my GDX position.

This is not a call that gold will outperform gold stocks. It's merely an acknowledgement that the equation is balancing in a way that will make us want to balance our overall gold position.

As subscribers know, my approach for gold has been to substitute it for a portion of what might normally be a bond position in portfolios that would normally hold 20% or 40% in bonds. The simple logic is that the diversification value of gold is similar to bonds, and in my opinion, carries far less downside at this point than fixed income.

The Dollar and Gold

These are not political statements, rather, simple analysis of stated policy goals. Biden prefers a less aggressive monetary regime so that most of the population can maintain purchasing power. Trump specifically calls for a weaker dollar because he believes it helps exports (we know that's less true than in the past because machine learning is driving supply chains closer to consumers and resources regardless of tax and currency considerations).

If the dollar stays range bound between the green zones, then gold will be firm with a bullish bias, but not the rocket ship up it has been lately. If the dollar falls below the massive dollar support zone, then gold becomes super bullish and could surpass the lower $3,000s price target I have assigned in the next several years.

Bloomberg demonstrates that there's a clear relationship between the dollar and gold: 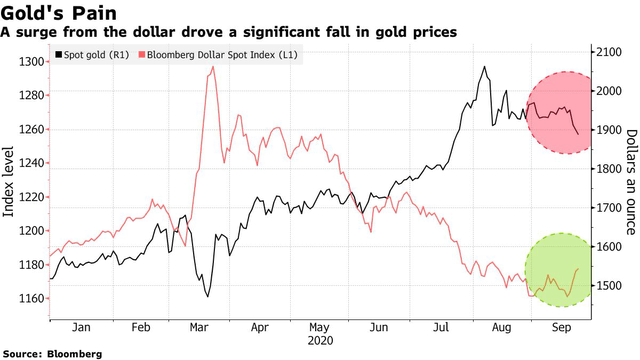 However, there have been plenty of times where gold has risen despite a firm or even rising dollar. The relationship to Treasuries demonstrates that there are periods where movements of fixed income and currencies can move in tandem. This is because the fundamentals underlying price moves sometimes align. It's nothing more exotic than that.

The recent weakness in gold can be attributed to the rise in long-term rates that has occurred in the absence of further quantitative easing. It's an open question whether we see more QE in the future. I strongly believe that we do see more QE, although I do not believe it's likely to be as aggressive as some imagine.

Again, I would urge a long-term gold investor to consider the supply and demand fundamentals underlying gold first, then move to monetary considerations. This will help keep emotions from dictating financial decisions.

Helicopter Money is completely different than QE. Helicopter money does not come with the corresponding debt of QE. Thus, there's no offsetting deflationary factor to the immediate inflationary impact. It's a true one-off event.

If helicopter money happens, then we will see an immediate degradation of the dollar. We also will see a normalization, at least partially, of interest rates through a federal budget that's less deficit driven after the helicopter money.

This would lead to a spike in gold, but then a gradual deflation from monetary factors, but again, offset by fundamental supply and demand factors. The pricing of gold after any spike would have to find equilibrium and that's impossible to forecast from here, though I think that $5,000 price target for gold becomes a legitimate target at least for a moment in time.

Modern Monetary Theory policy also is a possibility, though I think unlikely. Why is that? Ongoing printing of money per MMT is destructive to the confidence in the dollar. That means it's inherently inflationary in the most damaging way, it's impact on people's purchasing power in real time.

Comparatively, a one-off drop of say, $10-15 trillion, via a Milton Friedman "helicopter money drop," while extreme, is done and over with quickly. The perception would be that it solved problems that hopefully do not come back. MMT on the other hand is a steady drip, drip, drip of monetary destruction that saps confidence-making dollars less valuable. Do you want your dollars worth even less?

All asset values move with confidence. MMT for the purpose of deficit spending would kill long-term confidence in the dollar and cause a different financial crisis.

The short-term moves in the dollar are more a trader's concern than an investor's concern. It's important to remember that currencies are relative to each other and assets are relative to your local currency. It's a multi-part equation to find ultimate value or purchasing power.

In the very long run, I would expect both the dollar to rise relative to other currencies for the same reasons it always has, and for gold to rise relative to most currencies. The trading between now and then is subject to shorter-term moves based on dollar signals and trader sentiment, i.e. fear and greed.

If I have explained this well, then it's easy to see I'm either bullish on gold, or very bullish on gold. I cannot find a bearish argument for gold and I have tried. I was famously a gold bear on MarketWatch back in 2012, even poking fun at the gold bugs.

But, time, as it always does, changes things.

We have not grown the economy organically the past four years. Rather, we resorted to financial engineering through trickle down tax cuts for the wealthy that induced deficit spending, a monetary attack on the dollar and backward-looking fiscal policies, i.e. trying to support fossil fuels and engaging in counter productive go-it-alone trade wars.

During those years, the gold industry consolidated, cleaned up its balance sheets and operations, while the supply and demand picture came more into focus.

Now, we are dealing with the biggest outside economic shock, outside of wars, in the history of the republic in COVID-19. As a result, the Federal Reserve has blown the wad of its monetary cannon, double-dog-daring inflation to come back. 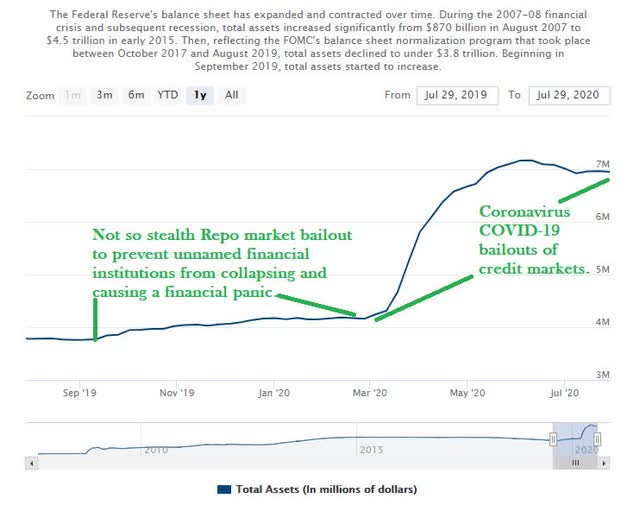 By definition, we are getting inflation. The question is: Will that inflation offset the deflationary pressures of demographics, debt and technology?

Another question is - will we see a period where we simultaneously have deflationary pressures manifest as unemployment and slow growth while price levels rise on basic goods, i.e. stagflation? I think it's highly likely we see a period of stagflation starting imminently. How long it lasts is largely dependent on factors outside the control of government, but can certainly be exasperated or mitigated by government policy.

In any of these scenarios, gold and gold stocks are good investments from the right entry prices.

Analyzing The Buy Zone On GLD

Here is a link to my chart for the SPDR GLD ETF (GLD).

As you see on the chart, I believe gold heads to about $3,000 per ounce by mid decade. It certainly won't be a straight line trip, but given monetary actions globally, with a tightening supply and demand equation, I think that's a reasonable target. There's certainly another level of upside potential beyond that, to $5,000 per ounce, however, we will worry about analyzing that if gold indeed reaches $3,000.

Our broad buy zone for GLD starts at about $172 which is marked by a longer term Fibonacci extension level. The price of gold got rejected at a confluence of Fib levels just recently and should head down a bit lower from here. However, gold in general is strong and we should not expect overwhelming weakness. This is merely a correction in a long-term bull market.

The Fib levels at about $160 and $155 have good structural support characteristics. I would expect those to most likely hold. If not held, the next leg down is to the $130s. I only expect to see prices in there if we have a deeply-correlated sell-off and people need to meet margin calls - like what happened in mid March.

You will want to start scaling in soon to bring your asset allocation to your desired level. For me, I'm looking to have 8% in both GLD and GDX by year end.

My GDX position will be reduced from the current higher levels as covered calls are exercised. I already have trimmed from my uncovered positions.

A Cash-secured Put To Sell On GLD

If you are using options, I believe selling the Dec. 18 or Dec. 31 $170 GLD put option (cash secured, don't use margin) has merit. You will want to look to get $10-$15 in premium to get a net price in that $155-$160 range I identified above. Set a GTC order for the appropriate amount for your asset allocation.

Find out what our members already know. Join us today to invest in a changing world with a Margin of Safety. Now 20% off your 1st year.