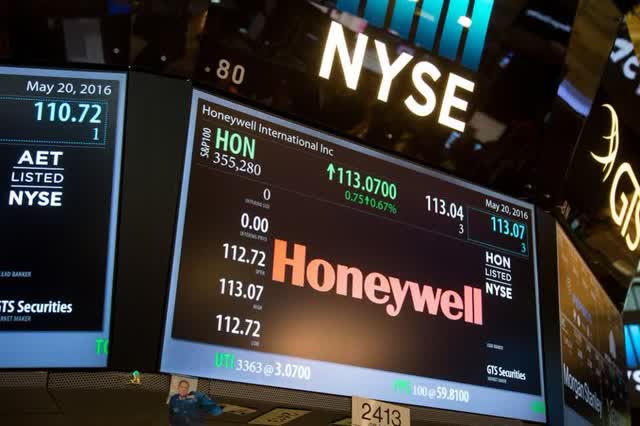 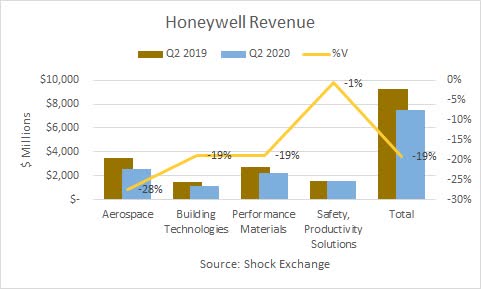 Aerospace revenue fell 28% Y/Y as global travel demand was in free fall. Within the Aerospace segment, commercial aviation and aftermarket sales fell 39% and 54%, respectively. Defense and space revenue actually grew 7%. Global passenger demand fell over 90% shortly after the pandemic materialized. Moody's does not expect passenger demand to recover to pre-pandemic levels for a few years. This will likely create more headwinds for Aerospace, which was 34% of total revenue, down from 38% in the year-earlier period.

Each of the company's other product segments also experienced revenue declines. Of note is that Performance Materials and Technologies (30% of total revenue) has customers that operate in the oil and gas industry. Demand destruction amid the pandemic caused oil prices to plummet in February and March. Supply cuts have driven Brent oil into the $42 range, which may not be robust enough to spur more E&P. Schlumberger (SLB) recently rang the alarm on North America E&P; it announced (1) a major restructuring to wring out costs and (2) the sale of its hydraulic fracking business, reducing exposure to North America. Along with Aerospace, I expect Honeywell's Performance Materials and Technologies division to face serious headwinds going forward.

Our phase 1 cost plans delivered approximately $500 million of year-on-year benefits in the second quarter and we completed planning for a phase 2 plan. These actions help us protect margins, limiting our decremental margins in the quarter to only 33%. In fact, we are actually able to expand segment margin in two of our four segments.

Despite the challenging macro-economic conditions, we generated $1.3 billion of pre-tax flow driven by cost actions and customer collections resulting in adjusted free cash flow conversion of 140%.

Management could potentially wring more costs out of the business in its phase 2 plan. However, if revenue continues to fall, margins could become depressed regardless of management actions. Until the economy fully reopens, I expect revenue and margins to continue to contract.

Honeywell's operations are highly-tethered to the global economy. The economy was facing headwinds last year as the U.S. and China were locked in a trade war. Prior to that, economic expansion was getting long in the tooth. The economy should improve once a vaccine for the coronavirus is discovered. However, I believe the global economy is headed for a fall over the long term. That does not bode well for Honeywell or other industrial businesses.

Honeywell has a solid balance sheet with about $15 billion in cash and securities. It generated about $2.1 billion of free cash flow ("FCF) through the first half of the year. This portends that liquidity should improve. HON has an enterprise value of $120 billion and trades at 16.8x last 12 months ("LTM") EBITDA. The stock has benefited from the melt-up in broader markets, yet the valuation likely does not reflect headwinds faced by Honeywell or the global economy.

HON is down less than 5% Y/Y, yet the stock is overvalued. Sell HON.

Shock Exchange
13.17K Followers
The Shock Exchange has a B.A. in economics and MBA from a top 10 business school. He has over 10 years of M&A / corporate finance experience. Currently head the New York Shock Exchange, financial literacy program based in Brooklyn, NY.His book, "Shock Exchange: How Inner-City Kids From Brooklyn Predicted the Great Recession and the Pain Ahead", predicted pain ahead for the U.S. economy and financial markets.In 2014 the law firm of Kirby, McInerney, LLP brought a class action lawsuit against Molycorp, Inc. for "materially misleading statements" in its financial statements. Kirby, McInerney used investigative journalism from the Shock Exchange to buttress its case. That's the discipline the Shock Exchange brings to every situation he covers for SA.