Tuesday Mornings Corp. (OTCPK:OTCPK:TUESQ) Ch.11 reorganization plan (docket 947) is a bankruptcy stock trader's dream come true: "shares are to be reinstated" on the plan effective date. In another usual move, there is a high probability that all assets will be sold under section 363 and shareholders may then instead receive some unknown cash recovery under a plan, which has driven the stock up 11 fold since early July. While this retailer of home goods is a relatively small bankruptcy case, it is becoming an extremely interesting case to follow.

The company has decided to pursue a dual track approach to exit Ch.11 bankruptcy. The first scheme of selling all their assets was originally included in the DIP financing agreement. It is interesting to note that the terms of the DIP agreement have governed this Ch.11 process so far, but their is currently no draw on the DIP. The second approach was to do a more traditional bankruptcy of creating a typical Ch.11 reorganizational plan and exiting bankruptcy as an operating company.

The company is trying to sell all their assets-they are not trying to sell the actual Tuesday Morning Corp. as an entity. Miller Buckfire & Co. has been trying to solicit interested parties in buying assets for some time and has "received certain indications of interest and non binding letters of intent from a number of parties" (docket 948).

On September 23, they filed a motion to sell all their assets (docket 948) under a bidding process. An expedited hearing on this sale motion is set already for September 29 (docket 949) at 1:30 p.m. CT. If the sale motion is approved, the bid deadline would be October 21. According to a filing (docket 797) by the Official Unsecured Creditors Committee they received "at least three proposals from financially sound and able counter-parties". The Committee also stated:

On September 4, 2020, the Debtors and Committee received an executed letter of intent (the “LOI”) from an interested party for a sale which, if closed, will result in a very favorable return for unsecured creditors. The LOI contains a sizeable cash bid coupled with the assumption of certain liabilities.

Unlike many other Ch.11 bidding processes, there is no stalking horse bid or credit bids. It seems that the current interested parties are all outside third-parties and not insiders.

Holders of $116.7 million GUC would get cash and $44 million in 5-year unsecured notes under the current reorganization plan. The interest rate on the notes, if paid in cash, would be 6% for the first two years and 8% for the remaining three years. If paid in kind-PIK, the interest rates would be 8% and 10%. Given the extreme uncertainty in the economy and the retail industry, these notes could trade at a significant discount to par with such low interest rates and low quality of unsecured paper. I, therefore, question the "Projected Recovery: 100%" that was stated in the disclosure statement for Class 5.

Shareholders are not getting wiped out, which often happens in bankruptcy. "On the Effective Date, Class 8 Interests shall be Reinstated, subject to dilution as otherwise provided for in the Plan." (The dilution could be from some type of management incentive plan and also could be from any warrants, which I think could be added to the recovery for Class 5 in an amended to plan to get the GUC holders closer to full recovery.)

Under the current proposed Ch.11 reorganization plan, they would exit bankruptcy as an operating company with about 490 "Go Forward Stores" in late December. The other store leases would be rejected and they expect to continue to renegotiate the remaining leases on more favorable terms. So basically the Ch.11 process will have allowed them to cut expenses by closing unprofitable stores and giving them breathing room to renegotiate leases. This is not a typical bankruptcy case where massive amounts of debt is cancelled to greatly reduce leverage.

The reorganization plan also contains a $48 million sale-leaseback transaction to raise cash. There is very limited information about this transaction, but if there is no transaction they are proposing to raise $35 million from a secured real estate credit facility. It is unclear about the status of any sale and leaseback negotiations. It could just come under the proposed order for sale of assets.

Fight Over the Two Different Approaches

Over the next month, the fight between shareholders and GUC holders will continue. Officers and directors own about 10% of the stock and there is also now an Official Equity Committee (see below). Much of the current GUC holders are experienced financial funds that bought unsecured claims, often at a steep discount, from various vendors and other claim holders.

Most of the holders of claims just want cash to cover their claims. I don't think many want to hold 5-year unsecured paper as part of their recovery and are not happy just swapping their paper claim for a long-term paper claim that pays a modest interest that they may not sell in an illiquid market. To be straightforward, these credit claim holders are not that concerned about any recovery for shareholders-they just want cash for themselves.

The choice is up to the company if they intend to follow the sale of assets approach or the proposed reorganization plan. There is some conflicts in filings of when this will be decided, but it seems that: "Not later than October 26, 2020 (or promptly after the conclusion of the Auction if the Auction remains ongoing on October 26, 2020 to accommodate continued bidding), the Debtors will file a notice informing the Court and parties in interest whether they intend to seek approval of a Sale or to pursue a plan of reorganization". Judge Hale, after appropriate hearings, will make the actual final decision.

The pro forma post bankruptcy emergence indicates that there is really not any deleveraging in the financial statement via a Ch.11 reorganization plan 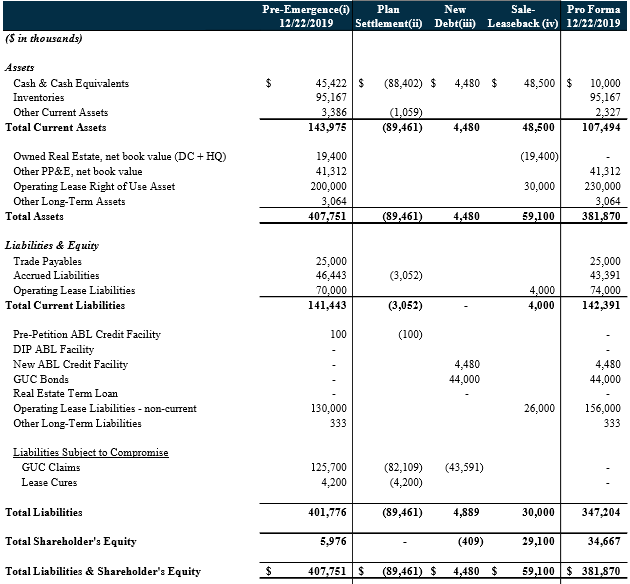 Even if all the assets are sold, there still will be a Ch.11 reorganization plan confirmed by the court. That plan, however, would be drastically different than the current proposed plan for TUESQ shareholders because their shares would be cancelled and the entity Tuesday Morning Corp. would be terminated. Shareholder's recovery would most likely be some amount of cash, if any, that is available after paying off all the higher priority claims. I also expect many shareholders will use the financial projections included in the disclosure statement to assert that they are "entitled" to very large recovery from any potential sale of assets. 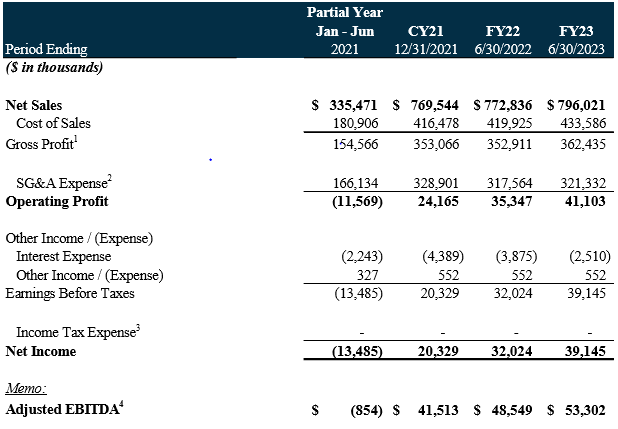 (NOTE: CY is for calendar year and FY is for fiscal year.)

Shareholders are also expected to assert that $139.6 million NOLs (as of June 30) should be factored into their recovery determination. Using the current income tax rate of 21%, but ignoring the time value of money, the NOLs are worth about $0.62 per share assuming no change in control. (Since the tax benefit is already factored into the net income projections, it is not the equity value using a 5x multiple, plus the value of the NOLs.)

I have serious doubts about the projections. There are just so many uncertainties about the economy over the next 15 months and I am a bear in general about brick and mortar retail. The solutions to the economic and health problems is made more complex because of the huge differences between certain parts of the country. For example, here in Wyoming everything, except the energy industry, is back to close to pre-Covid-19 levels, but in New York City the economy is still in a depression.

Tuesday Morning does have the advantage that they can adjust their very wide product line of linens ,housewares, craft items, and many other departments to reflect the best deals currently available from vendors. They are not stuck in a business operating model where customers are expecting to find specific brand items all the time in their stores.

The total priority is $125.3 million, but that does not include unpaid professional fees and other restructuring fees. (There is no borrowing currently under the DIP.) To justify the closing stock price on September 25 of $1.49, a bid would have to be greater than $125.3 million +professional/restructuring fees+$70 million ($1.47 x 47 million shares), assuming assets are sold. To get a figure using the 5x multiple from above, one would use $101.6 million instead of $70 million. The current stock price has a 3.5x multiple based on projected 2021 calendar year earnings.

It is important for investors to look at the details of announcements of any bids received. The total "headline" number could include the assumption of lease liabilities and other liabilities, which would make the number seem much higher.

Seeking Alpha contributor, Jeremy Blum, has been active in getting an equity committee and wrote an article on this investment opportunity a few months ago when the stock price was dirt cheap.

Too often Official Equity Committees just benefit the committee's lawyer who are paid millions out of the debtor's estate. J.C. Penney (OTCPK:OTCPK:JCPNQ) is a perfect example of lawyers trying to get an official equity committee appointed to make millions for themselves and could care less about the actual shareholders. At this point, it is almost impossible for JCPNQ shareholders to receive any recovery.

This Tuesday Morning case is completely different. In my opinion, TUESQ shareholders (especially retail shareholders) absolutely need a place at the table or they could be "thrown under the bus". Clearly there is potential for significant recovery for shareholders, either by just reinstating shares and exiting bankruptcy as an operating company or by selling assets and giving the remaining cash after paying creditors to shareholders.

Because I have a policy of almost never trading penney stocks in the U.S., I just watched this very interesting Ch.11 bankruptcy case from the bleachers.

The problem I have in making any recommendation about TUESQ stock is that: 1) the economic outlook is almost impossible to forecast with any degree of certainty; 2) I have doubts about the quality of the projections even without factoring in the economic uncertainties; 3) I am a bear on brick and mortar retail; 4) Tuesday Morning does not currently have an ecommerce business to fallback on if there are store closures again in the future.

This will be an interesting fight to watch over the next few months, but I am neutral on TUESQ stock. (I would buy general unsecured claims at a discount for institutional investors.)

WYCO Researcher
6.55K Followers
B.A. in Economics; M.S. in Finance. I usually write about distressed companies and companies in Ch.11 bankruptcy. I am semi-retired after spending decades in investments.