There are some good reasons why the Euro is currently trading above its long-term moving averages. Divergent monetary policy between the European Central Bank (ECB) and the Federal Reserve (FED), widening 2-year and 10-year bonds yields spreads and relatively better debt situation in the EU (vs the U.S.) are usually cited as the main causes of the Euro relative strength. But how likely is EURUSD to strengthen further and move towards 1.20 as some analysts expect?

I do not think that the bullish case for EURUSD is strong enough. Range bound trading with a slight bearish bias is more likely to prevail. I see EURUSD trading in the 1.14-1.18 range over the next six months.

One only needs to look at the chart below to ask an obvious question: is the Euro significantly overvalued? 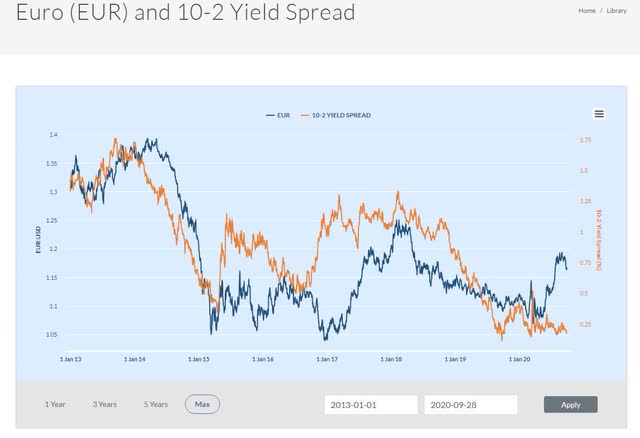 As of today, the 10-2 yield spread in Germany is near all-time low, while the EURUSD exchange rate is trading near two-year high. I see a major bearish divergence here.

Trade balance, one of the most important macroeconomic indicators influencing the exchange rate, is not looking particularly good. As of July, the seasonally adjusted total trade balance was still down some 33% y-t-d despite the fact that the euro was 3% weaker at that time than it is today. Now that the euro has appreciated further and the 2nd wave of coronavirus is taking hold, EU the trade balance will almost certainly deteriorate in Q3 and Q4. 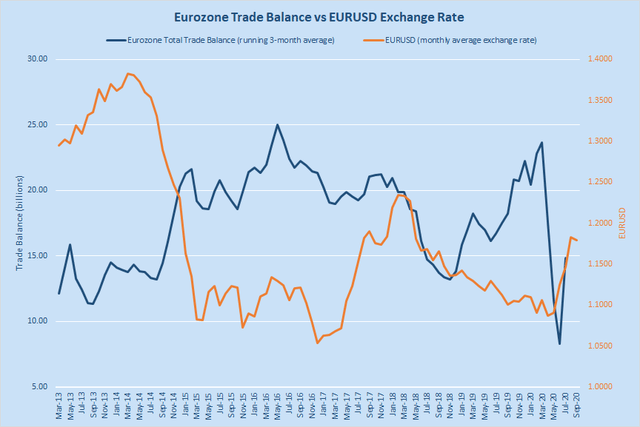 To make matters worse, Germany reported HICP inflation at -0.4% in September, which was a 30-basis point downward surprise vs market consensus. Therefore, core inflation is likely to have declined further including on VAT pass-through. The difference between Eurozone and U.S. consumer prices is now 150 basis points - the highest since August 2016. 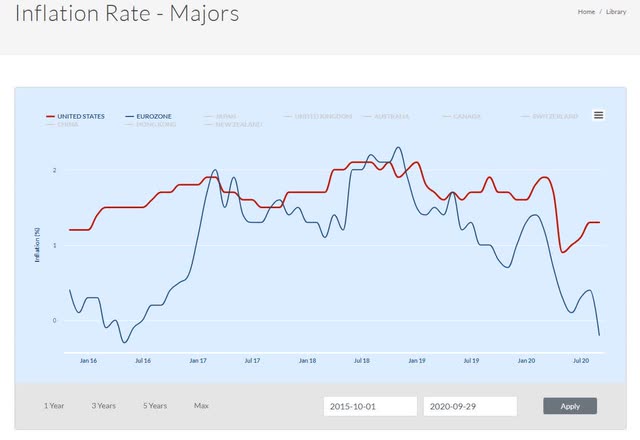 Finally, ECB President Christine Lagarde has recently set scene for further stimulus. While speaking before the ECON Committee of the European Parliament today (see here), she struck a dovish tone, which signaled that further monetary stimulus is likely. Ms. Lagarde noted that "the recovery remains incomplete, uncertain and uneven" and that "the public health crisis will continue to weigh on economic activity and poses downside risks to the economic outlook". In addition, "the sharp drop in economic activity earlier this year has weakened price pressures" that inflation was "expected to remain negative over the coming months" and was "clearly far away" from the ECB’s goal. She concluded that "in the current environment of elevated uncertainty, the Governing Council will carefully assess all incoming information, including developments in the exchange rate, with regard to its implications for the medium-term inflation outlook. It continues to stand ready to adjust all of its instruments, as appropriate, to ensure that inflation moves towards its aim in a sustained manner, in line with its commitment to symmetry".

Indeed, it appears increasingly likely that the ECB will soon announce a step up in net asset purchases, which will obviously put a downward pressure on the euro. 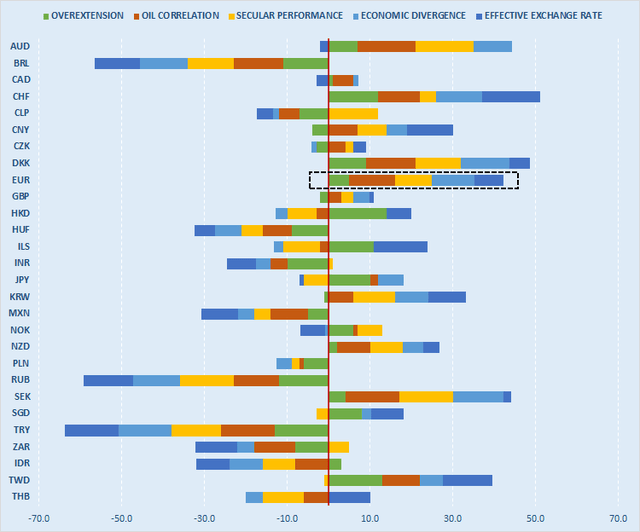 What is important is that the relative overvaluation of the Euro is rather broad-based. In other words, the results are above zero for all econometric studies plus traders' sentiment analysis.

Therefore, I would recommend either shorting a broad EUR index or to go short selected forex pairs - paritcularly, EURCAD, EURGBP. And if you prefer exotic pairs, EURRUB and EURMXN.