With the expiration of PPP and airline industry programs, as well as a second wave of coronavirus, unemployment is about to get worse.

Hundreds of thousands of people will not be contributing to retirement plans, and therefore the stock market, in coming weeks.

By January, many people will be taking distributions from retirement plans and choosing to take six months off while they wait out a vaccine.

Stocks are in for a rough fourth quarter and maybe a rough first quarter of 2021.

In March 2018, I reminded members of Margin of Safety Investing that the harbinger of the stock market is the jobs market. Historically that always has been true.

With the recession now two quarters old, the jobs numbers have been abysmal. Yet, since the Federal Reserve pulled out its triple-barreled, cliff-mounted, automatic rapid firing liquidity bazooka, the stock market has rallied to new highs. That's about to change.

Erasing A Decade Of Job Gains

The impact of the economic shutdown this spring was to erase a decade of job gains.

But, that's not the worst of it.

Initial jobless claims are still far above the Financial Crisis highs and quadruple what they were before the pandemic.

This week, initial unemployment claims for state programs fell to 837,000. That number is likely to be revised down a bit as California reviews its cases. However, there's another large group of unemployed applying through the Federal Pandemic Unemployment Assistance program used by self-employed, primarily gig workers and small business owners. 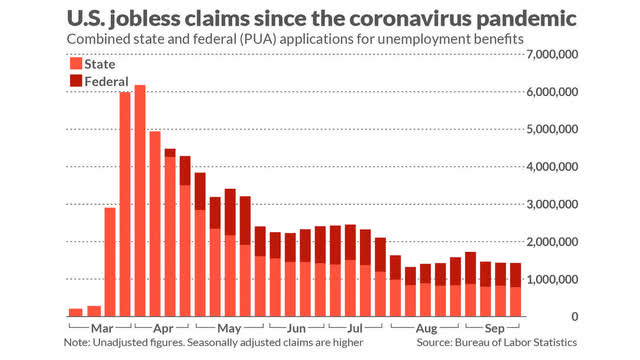 As you can see, initial claims are more than 1.4 million in reality which is not what the fake CNBC news has been portraying each week.

The Labor Participation Rate has plunged. 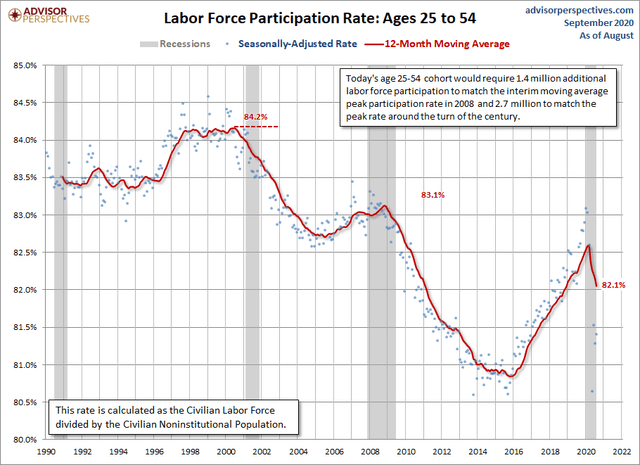 Job openings remain at about average levels, but off of highs, meaning there simply isn't enough jobs to go around to move the needle on employment short term.

In the six months of this, and let's call it what it is, depression, over 60 million Americans have filed for unemployment insurance, more than the entire 18-month Great Recession. And the initial reopening "little v" employment recovery has turned nearly horizontal.

What's Next For Unemployment?

A new wave of higher income layoffs is hitting the economy now. And monetary or fiscal stimulus or not, these jobs are not going to even start coming back until next spring. Many jobs will take years to come back.

What we are about to see are more than a million higher income earners newly out of work. Headlines are everywhere: 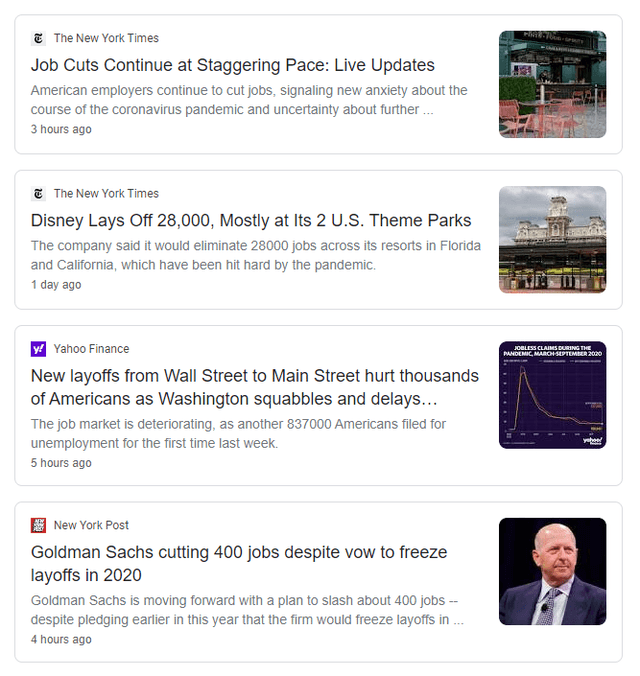 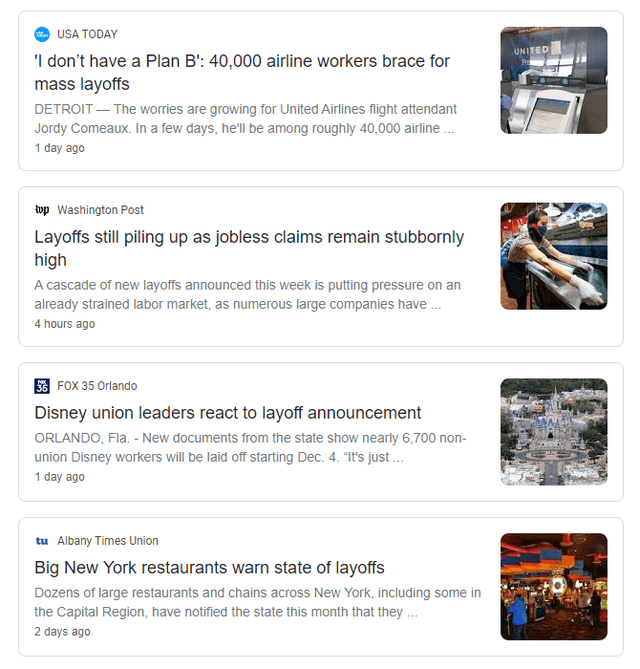 The pain extends to almost every industry.

The Petroleum Equipment & Services Association is anticipating another 100,000 to 250,000 job losses in coming quarters on top of the already 103,420 jobs lost since the pandemic started. Paraphrasing, they remind us that "every merger comes with job cuts."

Royal Dutch Shell (RDS.A) (NYSE:RDS.B) announced 9,000 job cuts this week. That's not all U.S. but consider where that implies the global economy is headed. Where do we think Exxon Mobil (XOM) lands on layoffs as Q3 lines up to be unprofitable again? Chevron (CVX)? ConocoPhillips (COP). These are all big employers.

American Airlines (AAL) and United Airlines (UAL) announced a combined 35,000 plus job cuts this week. Other airlines are following suit.

We all have seen Disney's (DIS) massive layoff announcement.

Restaurants are closing as the weather changes, unable to hang on, meaning management and owners are losing their pay as well.

To be sure, some are doing better than others, but it's still worse than a year ago. 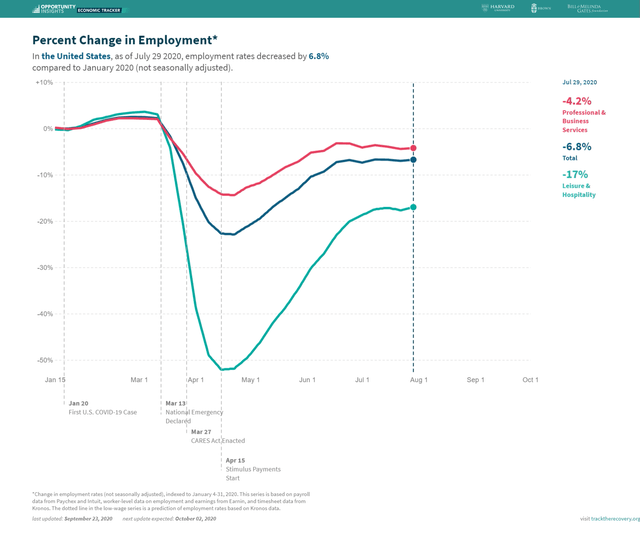 What Investors Need To Know

As layoffs come back to higher paid workers, that's a large group that will no longer be contributing to retirement plans. The loss of those paycheck to paycheck contributions to the stock market will be significant, especially given that this new round of layoffs is largely hitting middle and high earners - folks generally making retirement plan contributions. 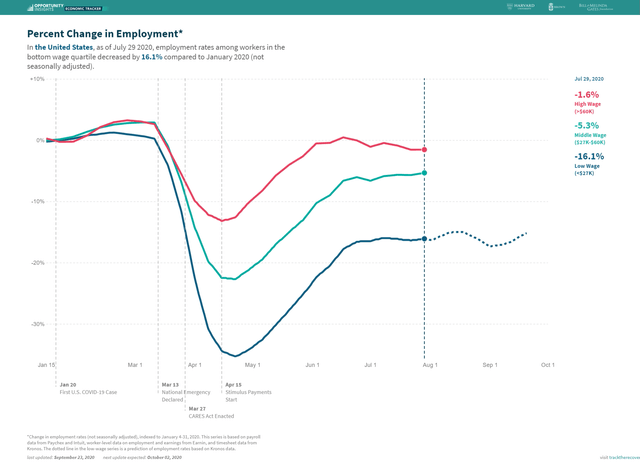 Consider that stocks already saw outflows on a run of the mill stock market correction in September. I would argue many folks were sellers as they took profits amid election year volatility concerns. 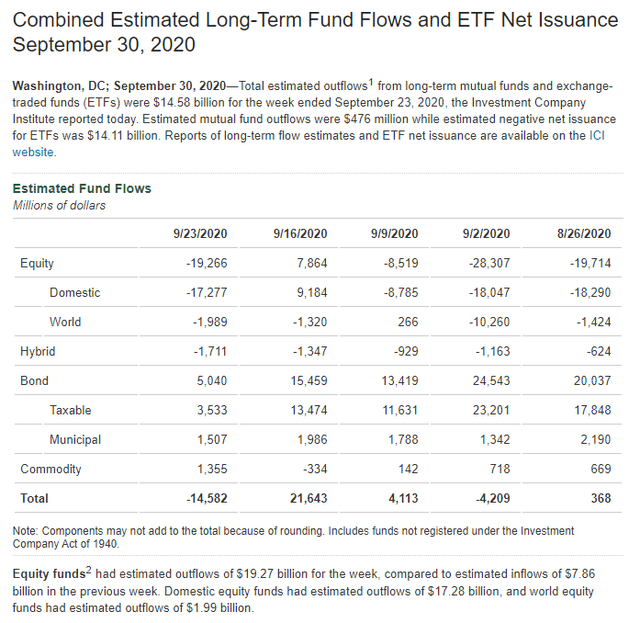 Now imagine a million to two million new people on net being laid off in the fourth quarter. None will be contributing to their 401k anymore. According to Fidelity, the lowest contributing age demographic, also the lowest paid, 20-29 year-olds were putting 7% into their 401k.

That means hundreds of millions of dollars no longer going into stocks each month. Now refer back up to the ICI outflows. It's not a pretty picture. But wait, there's more.

Here's the kicker. Let's think about this psychologically. The job market is tough. Coronavirus is still dangerous. Many professionals have been working for years. A lot of other people will likely make similar amounts with supplemental unemployment benefits (presuming a deal sometime) as working. Do you think a lot of them would just as soon take off until the end of next summer? I do.

At some point many people with higher standards of living, or just shortages of cash, also will be using the CARES Act to withdraw money from retirement plans. My guess is that many strategically wait until January to do that for tax reasons. Then again, if President Trump loses, maybe they take the money by year-end for the potential lower tax rates. Hard to know.

Either way, dramatically lower contributions via retirement plans and possibly hundreds of thousands of people withdrawing up to $100,000 from retirement plans (per CARES Act) is a heckuva one-two punch that's going to leave a mark.

Virtually all of the gains in the stock market since the 2018 correction have been based on valuation increases, not earnings increases. 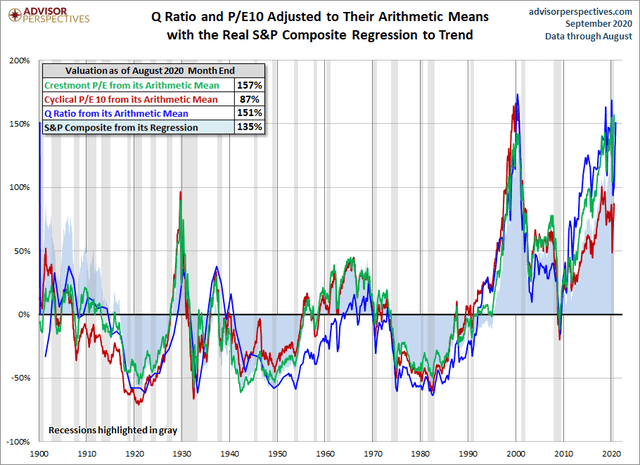 I talked about valuations extensively earlier this year when I said Expect Major Stock Market Challenges In 2020. To be sure, in the face of the Fed money storm, it's easy to wonder does it matter anymore that stocks are still overvalued?

The answer of course is that in the long run valuations do matter. The markets are a weighing machine in the end. In the short run, it's a popularity contest.

So, what in the short run (I define short term as under six months) could make stocks unpopular? What could make stocks revert to near the mean on valuations? I can think of a few things and the biggest one is unemployment remaining a problem for longer than we all hoped just a few months ago.

In my quarterly "Plug & Play Portfolio Models" I suggested that investors move to the very conservative edge of their strategic asset allocation with a tactical move into more cash.

I explained in depth my concerns that Q4 2020 could look a lot like Q4 2018 in a recent webinar. With the many narratives from the dollar to the Fed to the election, labor pains are still the most important thing to keep in mind.

As you consider whether or not to raise cash, and clearly according to ICI some of you have, let us keep in mind that Ray Dalio reminds us that cash is not a great long-term position. But, from a tactical risk management standpoint it can be the right thing to do short term. Ask Warren Buffett, Berkshire Hathaway (BRK.B) (NYSE:BRK.B) is once again sitting on a record cash pile more than $150 billion, which accounts for about half of Berkshire's value.

Find out what our members already know and get our "Plug & Play Portfolio Models" for ETFs and stocks. Join us today to invest in a changing world with a Margin of Safety. Now 20% off your 1st year.