This past July 17, I compared my favorite long idea, Farmer Mac (NYSE:AGM), to my favorite short idea, Redfin. Today I revisit that theme, with one adjustment – I replace Redfin (RDFN) with Zillow (Z), another stock I’ve suggested shorting, and which has pulled even with Redfin as my favorite short.

Admit defeat? Sorry, no. Now Redfin and Zillow have similar downsides in my view, of about 80%, and Farmer Mac should easily be a double. Let me explain.

There are lots of approaches to stock investing. Many are emotional, not scientific. Momentum investing, for example, which says that if the stock went up today, it should go up tomorrow. Or what I’ve called magical investing, which assumes that Stock X has found a business model that creates a moat which competitors forever can’t cross. If enough people buy the momentum/moat belief (note the word “belief”) then these investment approaches will work for some time period.

But investment science is built on the principle that we want to own slices of a business for a simple reason - because businesses can make money. Check out Shark Tank some time for proof. The more earnings the better, and the sooner those earnings are generated, the better. For example, the Corporate Finance Institute lists as the primary stock valuation tool the dividend discount model, which it defines as:

“A quantitative method of valuing a company’s stock price based on the assumption that the current fair price of a stock equals the sum of all of the company’s future dividends discounted back to their present value.”

Since nearly all companies pay out only part of their earnings as dividends, investors typically discount earnings, not dividends, so I’ll change the name to the “earnings discount model.”

I then add another concept – the “unearned stock value.” For example, I buy a stock for $100 a share. I buy it because I assume that future earnings discounted to today are greater than $100. The first year the company earns $8 per share, which after the 10% annual discount rate is still about $8. After the first year, then, my unearned stock value is $92: the $100 I paid less the $8 in present value I’ve already received. The company has an $8 EPS in year two, which discounted to the present is $7, leaving me with an unearned stock value of $85. And so on. Makes sense, right?

Let’s apply these concepts to Farmer Mac and Zillow. I support my earnings stories below, but here are my numbers:

So at the end of 2025, Farmer Mac’s unearned stock value is $13, and Zillow’s is $99. Absorb those numbers for a minute. Mr. or Ms. Market is obviously assuming that beyond 2025, Zillow will substantially out-earn Farmer Mac. That seems essentially impossible, if my 2025 EPS estimates of $14 for Farmer Mac and $4 for Zillow are anywhere close.

It also seems nearly impossible for Zillow’s unearned stock value to ever turn negative. For example, assume that Zillow grows its EPS 25% a year from 2025 (my very optimistic $4 EPS starting point) to 2040. Yes, I had to forecast to 2040. Then Zillow’s unearned stock value turns negative only in 2039! If Zillow’s post-’25 EPS growth is 20% - still very optimistic – investors are still short $19 a share. Finally, if I conservatively assume that Farmer Mac grows its EPS by only $1 a share through 2040, Investors net $82 a share. There is my “Farmer Mac’s stock is a double” argument.

For a fuller explanation, check out my Seeking Alpha articles from this past March 24 and August 11. What’s new since August 11? The beauty of Farmer Mac is that nearly nothing is ever new. But I did do more homework.

I’ve long studied the data released by the government’s Bureau of Economic Analysis (BEA). But I never focused on one piece of data of interest to Farmer Mac – farm income reported in its Personal Income section. I downloaded it and compared it to Farmer Mac’s loan loss rate. Here is the result: 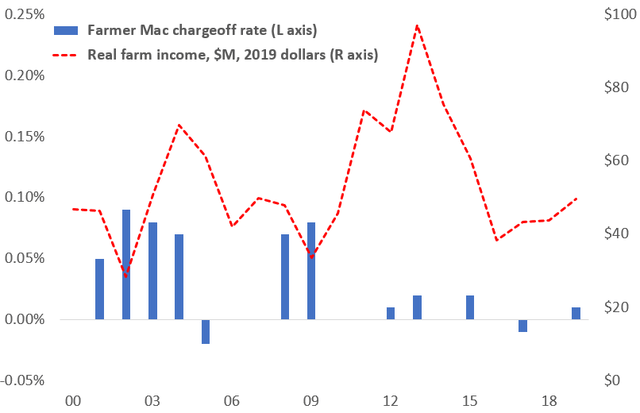 The chart shows little correlation between farm income and Farmer Mac chargeoffs. The two prior times that farm income fell, Farmer Mac’s chargeoff rate averaged 6-8 bp of loans outstanding. But during the past five years of relatively weak income, chargeoffs were near zero. Farmer Mac’s loan losses are far less a function of the farm economy and far more a function of excellent lending standards and federal government financial subsidies to the agricultural sector. For example, from the September 23, 2020 New York Times:

“The House approved a stopgap spending bill…agreeing to include tens of billions of dollars in additional relief for struggling farmers and for nutritional assistance.”

If you want more on Zillow, check out my Seeking Alpha articles from May 27 and September 2.

Zillow hasn’t specifically put out any information of interest recently. But remember that Zillow needs miraculous growth to justify its stock price. Not only must Zillow management keep making all the right moves, but they need markets to stay strong and competitors to be weak. And that is where the latest data points are unsettling.

The news on Zillow’s markets…

The volume of home sales is key to both the ad and home-flipping businesses. Home sales have recently been strong as COVID has incented U.S. households to relocate to the suburbs and home offices. But Fannie Mae’s September forecast expects total home sales (new and resales) to rise by only 1% this year and 2% next year. Long term doesn’t even look that good. U.S. population growth is down to 0.5%, which doesn’t bode well for future new housing demand.

Mortgage originations are key for Zillow’s mortgage banking business. The good news is that the same Fannie Mae report says that Q2 originations of $1.2 trillion were double a year ago, driven by refinancing taking advantage of record-low mortgage interest rates. But Fannie knows that soon everyone who wants to refinance at these rates will have done so. Therefore, it expects that by Q4 of ’21, mortgage originations will be back at $0.6 trillion.

… And Zillow’s competition in home flipping…

I haven’t seen anything new on ad competitors. But that is not the case in the home flipping business. The big news came from competitor Opendoor:

“Opendoor, a Leading Digital Platform for Residential Real Estate, Announces Plans to Become Publicly-traded via Merger with Social Capital Hedosophia. Opendoor has reinvented how people buy and sell a home with its simple, digital and on-demand experience The transaction will enable Opendoor to continue to invest in growth, market expansion and new products that will accelerate Opendoor’s plan to become a digital one-stop shop for homeowners. The transaction values Opendoor at an enterprise value of $4.8 billion, and is expected to provide up to $1.0 billion in cash proceeds…”

By the way, Zillow lost $500 million over the past 1½ years flipping homes. Opendoor, the “leading digital platform”? Its slide show issued with the going-public announcement of course doesn’t show actual GAAP income. We do get an “adjusted EBITDA” number, which ignores a variety of actual expenses. But even this phony number shows losses of $218 million last year, an expected loss of $185 million this year and continued losses for ’21 and ’22. Gosh, it makes me want to become a home flipper myself!

Then there are the buy-to-rent home investors like Invitation Homes (INVH) and American Homes 4 Rent (AMH). These companies certainly have little to no interest in buying from flippers like Zillow, so they are competitors. Here’s what they’re up to:

The refi boom has of course drawn new competition:

“When did mortgage become sexy? First we had Rocket going public, then loanDepot announced its intentions, and yesterday, UWM unveiled its plans. Also yesterday, there were reports that Better.com is in talks to raise more than $100 million in new funding…” (HousingWire)

The upside on Farmer Mac and the downside on Zillow are both substantial. The news adds support to Farmer Mac’s story and concerns about Zillow’s story. I reiterate my Farmer Mac long and Zillow short, with increased conviction.

Gary J. Gordon
2.33K Followers
Gary Gordon’s career was on Wall Street, where he was a stock analyst covering the housing, mortgage and consumer finance industries. He also served as a U.S. investment strategist and as a portfolio manager. The bulk of his work career was at PaineWebber and UBS. He is now retired. Mr. Gordon is an adjunct professor at Mercy College in New York. He teaches economics on campus and math at prisons (Sing Sing and Taconic in New York). He also presents financial literacy seminars to adults and students. He is on the Board of Hudson Link (college education for incarcerated men and women) and the Baron de Hirsch Fund. Mr. Gordon is married with two young adult children. He has degrees from Colgate University (BA '74, philosophy) and The Wharton School (MBA '77, finance).

Disclosure: I am/we are long AGM. I wrote this article myself, and it expresses my own opinions. I am not receiving compensation for it (other than from Seeking Alpha). I have no business relationship with any company whose stock is mentioned in this article.

Additional disclosure: I am short Zillow and Redfin