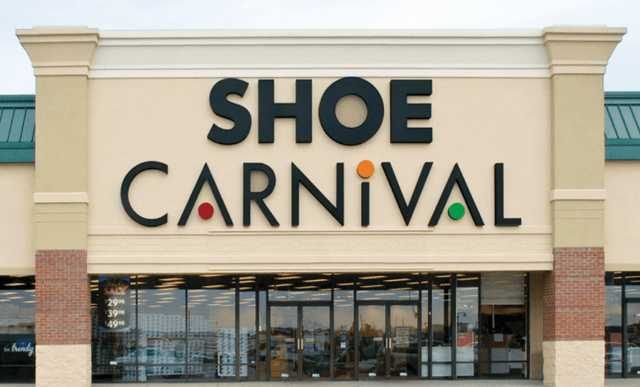 The crisis that beset the world earlier this year created some valuation dislocations in many sectors of the stock market. One was certainly retail, as stocks in the group performed wildly differently throughout the initial stages of panic, and subsequently. One stock that was sold far too heavily – and remains unappreciated to this day, in my view – is Shoe Carnival (NASDAQ:SCVL). 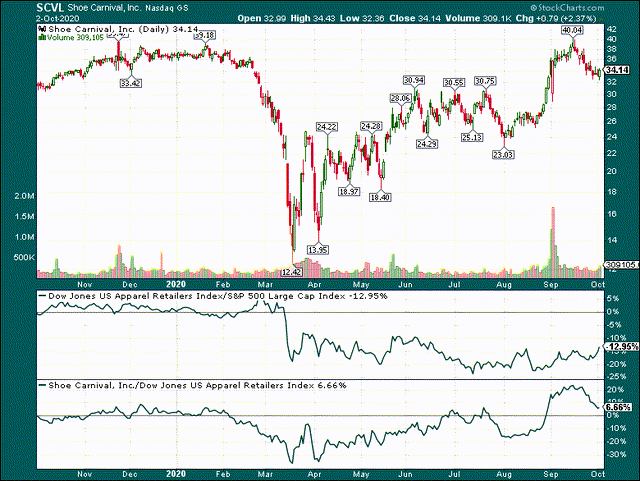 The stock made a new 2020 high about a month ago but was rudely rebuffed from that level, and trades today about six dollars lower. That’s a very sizable pullback and in my view, Shoe Carnival is back into the value category as of this point.

The apparel retailers index has underperformed this year, but has turned higher in recent weeks. Shoe Carnival has outperformed its benchmark for the year, so if the group does continue to run higher against the S&P 500, Shoe Carnival stands to perform quite well indeed.

In addition, there is very strong support below at about $31 from the triple top that was put in over the course of June and July. That area should be vigorously defended by the bulls, and that is your downside risk potential at this point.

If we view $31 as the downside risk level, and $40 as the upside target (at least), Shoe Carnival offers investors a risk/reward of about 2:1 given we are $6 from the high and $3 from what should be robust support. The stock is also very reasonably priced and has no long-term debt, so I see Shoe Carnival as a buy.

Much of the appeal of Shoe Carnival is the value the stock offers, not necessarily the growth potential Shoe Carnival possesses at the moment. Shoe Carnival is already pretty well-sized at nearly 400 stores, so it isn’t like the company is just starting out on its growth journey. That can be seen in revenue numbers below, which could leave a bit to be desired for growth-focused investors.

Shoe Carnival’s revenue has moved up fractionally over time, but this is not a growth story in the way some smaller retailers may be, just given that Shoe Carnival seems pretty happy with its footprint as it is. The good news is that its existing footprint has been working, and should continue to do so in the coming years.

Comparable sales haven’t always been eye-popping, but every year in the past several have been positive, with some decidedly so. These are robust gains for a retailer and should not be overlooked, because they not only help margins grow as expenses are leveraged down, but these numbers prove Shoe Carnival’s model has staying power. In other words, it works in a variety of consumer spending climates, which is more important now than perhaps ever before.

Speaking of margins, I’ve mentioned here on SA before that I don’t find Shoe Carnival’s margins to be as good as they could be.

While Shoe Carnival will see some margin oscillation over time, barring a material shift in the way it runs its business, I’d suggest margin gains aren’t a likely source of earnings growth. At least, not in meaningful quantities.

However, where Shoe Carnival does shine is with respect to its share repurchases, the results of which we can see below. 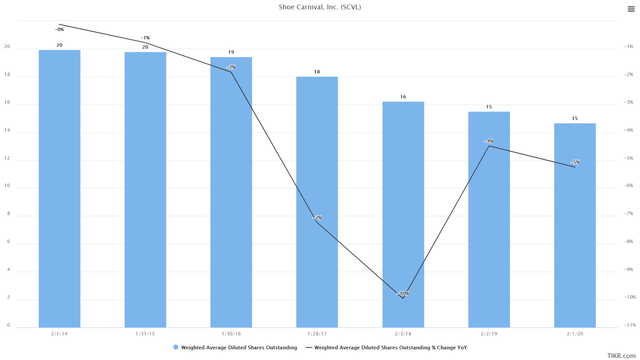 The company’s share count has declined steadily – and fairly rapidly – over the past several years, as Shoe Carnival spends freely on retiring its own stock. And why not? The market doesn’t apply a high multiple to the stock, and the company obviously recognizes this, and spends its free cash flow accordingly. This, perhaps more than anything, will drive EPS higher in the coming years with Shoe Carnival. Given today’s valuation, that should be more than good enough.

Part of the reason Shoe Carnival is able to spend so freely on buybacks is because it has a pristine balance sheet, as we can see below.

Net debt was negative for a very long time until fiscal 2020, when accounting rules for leases changed, so Shoe Carnival still doesn’t have any long-term debt; the purple bar above shows that the entirety of Shoe Carnival’s net debt is in capital leases, not what I would consider actual debt that is interest-bearing. In other words, Shoe Carnival still has the same outstanding balance sheet it always had, which is a huge positive in an environment where overly-leveraged retailers are struggling with liquidity.

Putting all of this together, Shoe Carnival is a stock with size and scale, a model that works in all kinds of consumer spending environments, a debt-free balance sheet, and the willingness and ability to retire lots of shares over time.

EPS is currently carving out a V-bottom, which I fully expect to resolve to the upside given how strongly consumer spending has come back from the initial panic. With EPS slated to come in at $3.26 next year, shares trade for just 10.5 times forward earnings, and therefore the stock is way too cheap.

Shoe Carnival has a long history of strong profits and free cash flow, it has proven it can grow comparable sales meaningfully over time, and the stock is being priced as though its growth is essentially nonexistent. Shoe Carnival is not a growth stock, but it is cheap enough at this point that it is certainly worth a look.

Disclosure: I/we have no positions in any stocks mentioned, but may initiate a long position in SCVL over the next 72 hours. I wrote this article myself, and it expresses my own opinions. I am not receiving compensation for it (other than from Seeking Alpha). I have no business relationship with any company whose stock is mentioned in this article.