The stock market is no longer what you think it is, it's what it was way back in 1999 all over again.

So far, Millennials, with whales piling on, have been buyers using call options and margin.

Soon, Millennials and whales could take the other side of the trade, driving stock prices down fast and hard.

If you aren't paying attention to or don't care what the Millennials are doing with their investments, you do so at your own risk.

I have talked to members of Margin of Safety Investing about the behavior and impact of Millennial traders for almost three years now. I said that at some point in the 2020s, Millennials would be more important for price movements of securities than Boomers. Not a super brave call, but not mainstream either.

That discussion has taken place in the context that since late 2017 market structure began to be more dictated by traders than "regular" (buy and hold) investors. That was largely due to Boomers and foreigners losing some of their interest in U.S. stocks under the Trump Administration.

The result I said would be greater surges in volatility and wider price swings. We have seen that now several times since early 2018. COVID-19 has been a significant amplifier.

This year, Millennials have become the marginal price influencers of many stocks. In effect, Millennials have taken over a large part of the stock market ahead of schedule due to coronavirus. There's really no other way to look at things.

As a result, it's important that we understand the Millennial impact on the stock market.

Two web phenomena, complementary and competitive to each other, have been at the forefront of the Millennial takeover of the stock market. Reddit and Robinhood are the two "new kids" on the block.

Reddit has become the defacto dark lord of Millennial investing. Subreddits like Wall Street Bets are influencing irreverent young investors while more "seasoned" investors are still trying to figure out why Robinhood is a big deal (hint: millions of accounts). 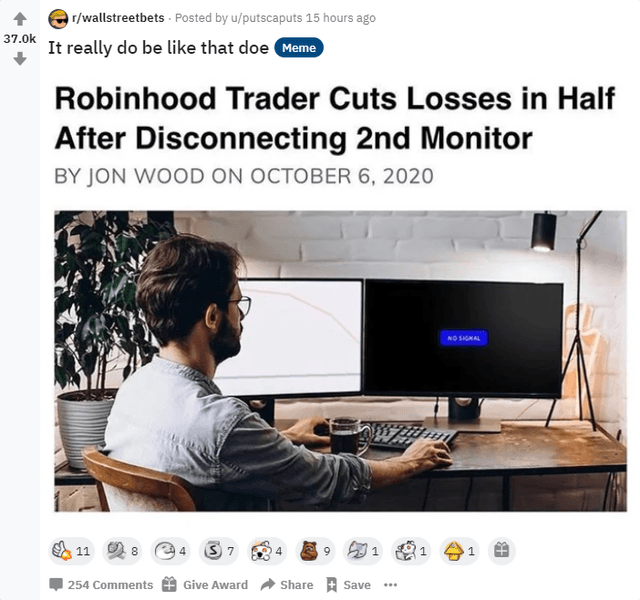 Both Reddit and Robinhood are big deals because the largest generation in the United States gravitates to both. It should be enough that the largest demographic in America are net investors, while the Boomers, the former drivers of the markets, are approaching net neutral as a group.

In fact, Millennials have been the primary force driving the retail share of equity trades doubling from 10% to 20% in the past two years. 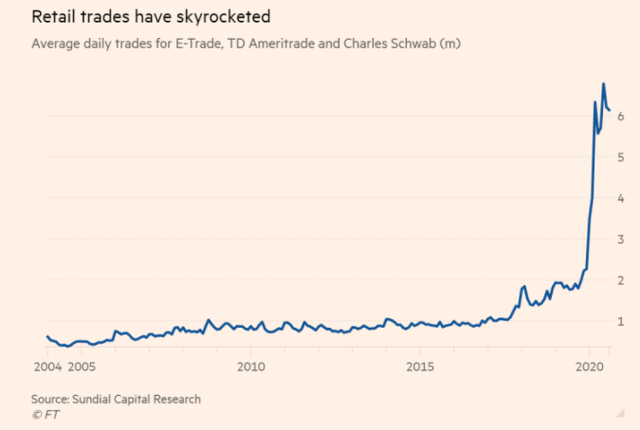 Mind you, the dollars that Millennials control is still small, but, at the margin is where price changes in any market.

One study showed that retail investors using call options impacted prices five times more than institutional buyers. How could that happen? Consider this (via Bloomberg), the $4 billion Softbank (OTCPK:SFTBY) trade in tech call options was dwarfed by about $40 billion in retail call options across millions of small accounts.

The Millennials coming into the Coronavirus Crash were dramatically behind other generations at similar ages in net worth. Right now, Millennials, average age 32, control about 4.6% of wealth in America, or about $5.2 trillion. Boomers on the other hand control nearly $60 trillion. 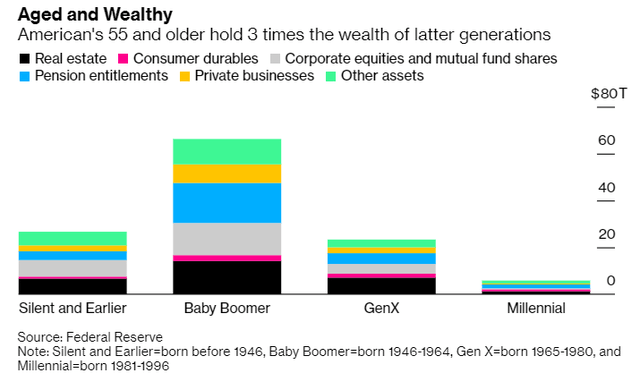 Interestingly, Millennial wealth is up significantly from a year ago when they controlled only 3.2% of American wealth. What accounts for that large bump of over 40% in one year? In two words: Jobs and stocks.

On the jobs front, middle class and affluent Millennials have been less impacted by COVID-19. Not only are they younger, but their jobs are more technology driven, i.e. less likely to be disrupted.

As for stocks, middle class and affluent Millennials, by virtue of being employed, and frugal, continued to contribute to their retirement plans. Others have become very good traders as they are not content to set it and forget it.

In watching and listening to Millennial traders I find something that I have found on the semi-pro and pro poker tables, they take it seriously, they study it, they respect it, even if they're jokes and memes are, shall we say, creative.

Howard Gold over at MarketWatch essentially mocked Millennials buying stocks and calls back in June. He was wrong. The Millennial generation of trader is far better than what Gold saw during the tech boom and misguided Boglehead lost decade of 2000-2009.

As the name Robinhood implies, Millennial traders are learning how to take from the rich, or at least richer than them. They are not waiting for an inheritance. They are asking for more money for the work they do and they are handling their investments.

And consider this: Millennial traders understanding of liquidity and market structure is very good compared to Boomers. I'm not saying at similar ages. On that front Millennials blow them away. I mean the average Millennial trader today is on par with "ma and pa" Boomer investors who rode the debt wave to a decent retirement plan balance.

On Wall Street Bets, discussion of buying calls on favored stocks runs rampant. The mantra goes like this:

I have long suspected that hedge fund plants drop some of the seeds of the trades. Regardless, many Millennial traders, many of them treating it like a graduate level class in gambling, ala the MIT blackjack team, have been using both margin and call options to generate gains - big gains.

The idea that buying calls forces market makers to buy stocks does of course carry weight. They will balance the risk in their book if they are short calls which has been a regular occurrence going back to April. That has been a lot of the fuel for rising stock prices.

The market makers of course have recourse. They raised the prices of call options dramatically. Matt Thompson at Thompson Capital Management described it as such: "you get this big wall of demand that doesn’t really know what they’re buying... All they know is they want the call and they want it now. You can keep raising prices of those short-term options if the demand is sufficient.” (Bloomberg)

Sentiment Trader provides some pretty nifty charts for tracking options activity and pricing. Here we see how cheap puts are to calls. 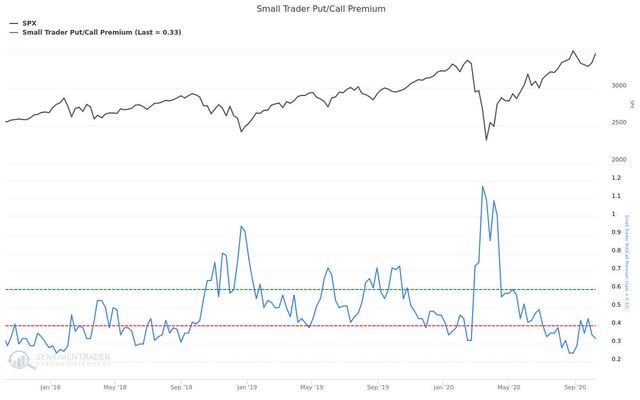 Traders don't mind, they keep loading up on calls as described: 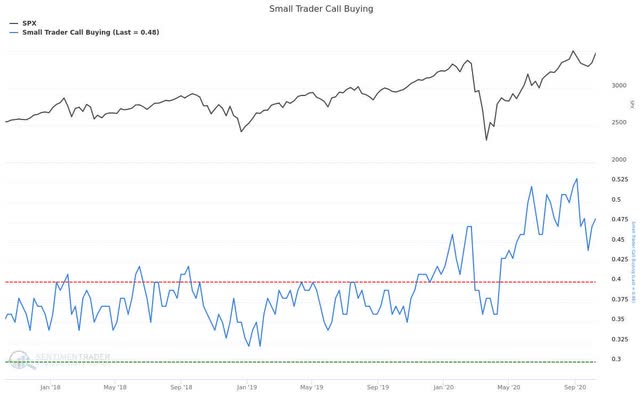 Interestingly, as described by Bloomberg and FT, we can see that large call buyers followed the small buyers in, though not as aggressively. 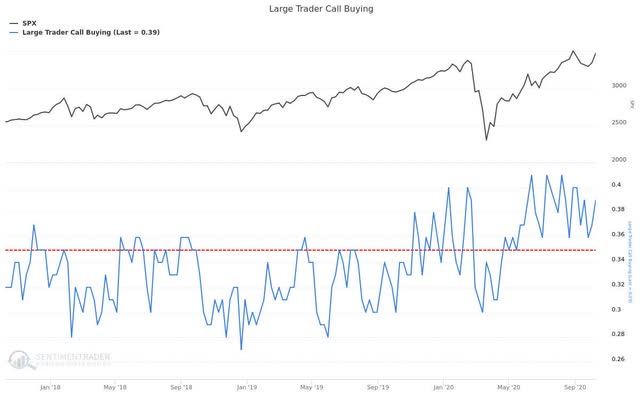 The next chart shows the put/call ratio adjusted for the six-month trend to give context. What we see is that the market is getting to a very dangerous spot. I have marked the point where puts finally surged during the March sell-off. A full month after the correction started and a few days before it ended. Put that in today's context of an overvalued market, no fiscal stimulus yet, election, earnings season, Fed running in place, etc, etc... 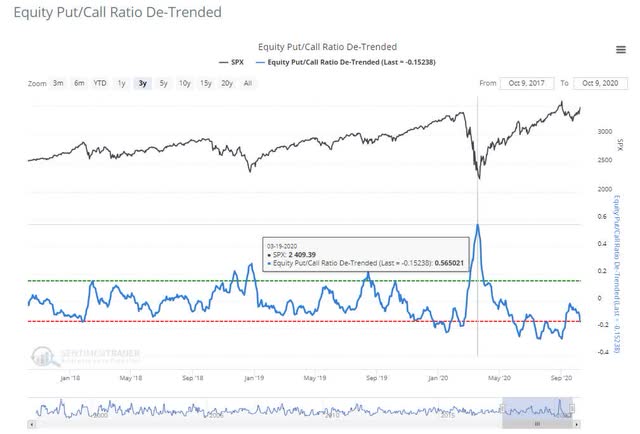 Here I am speculating, but as I said, I follow Reddit just like Citadel, Morgan Stanley (NYSE:MS), Goldman Sachs (NYSE:GS) and a bunch of hedge funds do. It doesn't take much to see that interest in put options seems to be picking up the past few weeks since many of their short dated September calls expired worthless.

With what we know about how expensive call options have become and my idea that the Millennials are pretty smart, do we think that all the volatility factors noted above along with the quaint notion of valuation might make them take a different track. After all, they are good at reading charts: 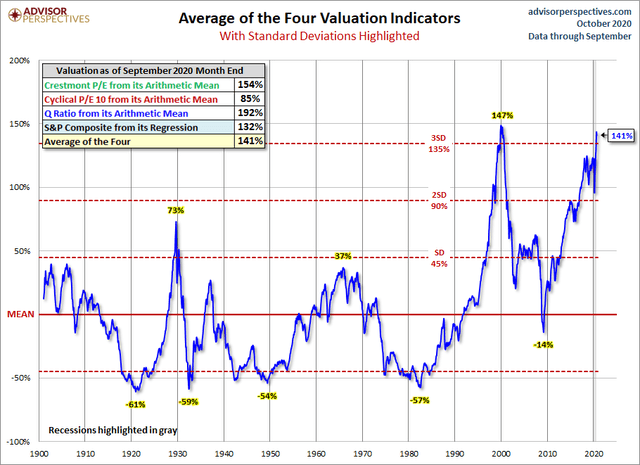 If I'm right, as call options expire this Friday, Millennial traders, and some whales are going to start loading up on puts. If the big traders decide to hedge less (not buy underlying stock proportional to their put positions) and small traders load up for billions, then the market makers have to sell stock, a lot of it. That could trigger a significant correction by itself.

But what about all those buy and hold investors? What will it take to shake a few more of them out of the stock market? Given so many layoffs, I would refer to my last 500 comment article:

There's a lot of people who don't want to lose money right about now. They could become sellers pretty quickly too. Especially those planning to use the CARES Act to make a withdrawal to take an unemployment sabbatical until next summer. Suddenly, my thoughts that "Risk Off" Could Happen Fast And Hard doesn't seem far fetched.

And if there's no fiscal stimulus? And if the Fed doesn't run right in with QE given that the bond market is thin? Well, that Armageddon scenario I've been watching on the back burner is suddenly in play.

'To The Moon' Vs. 'Coronavirus Crash II' Vs. 'Armageddon'

Of course, I could be wrong about the Millennial traders. Howard Gold and a few other old men could be right. And certainly, they could be undergoing a learning curve that yields a mass loss. Maybe they are just gamblers.

We certainly cannot rule out a wide range of experiences either. Let's not paint with too wide a brush. But on aggregate, I'll refer back to what I've learned about Millennials hanging out with them at the poker tables, on Milwaukee's baseball diamonds and around America though:

I think the Millennials are pretty sharp, they have a chip on their shoulder and they are motivated by the idea that the Boomers short changed them financially. Those are qualities that hedge funds look for when hiring. #okBoomer?

With options expiring Friday and earnings season really kicking off this week, I think it pays to be very careful out there. Next week on Monitoring Millennials (just kidding, but that would be an interesting series), what to invest in when a correction does come. Hint: invest in what the Millennials invest in.

Find out what our members already know. Join us today to invest in a changing world with a Margin of Safety. Now 20% off your 1st year.

Get our 4th Quarter Plug & Play Portfolio Models with a Free Trial.