Oracle (NYSE:ORCL) has been lagging its peers due to lackadaisical revenue growth. The last couple of years have been particularly torturous given the company's foray into the cloud has not resulted in much of an upside to the stock price vs peers.

However, the tide has been turning over the last few quarters with the company gaining prominence with industry research firms and customers alike. Looking at the trajectory of revenue, management commentary and market positioning, we think the Oracle stock can quickly deliver a 30% return with a potential for more. In addition to the visibility that the TikTok deal has brought, the possibility to collaborate with Walmart could give Oracle's standing a further boost.

Oracle has been increasingly becoming an industry-recognized player in the infrastructure as a service (IaaS) and software as a service (SaaS) markets, with greater acceptance across customers. 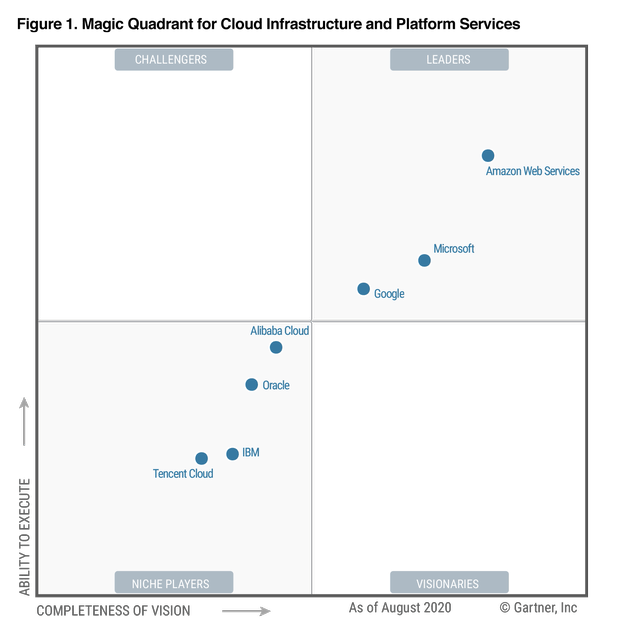 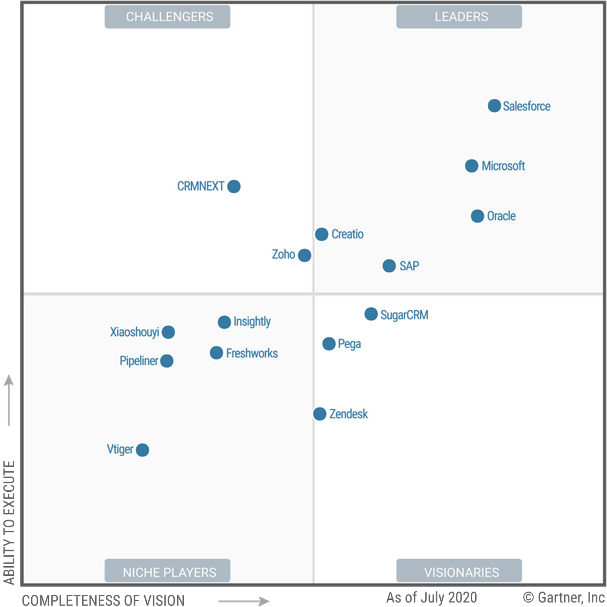 In the 2020, Industry CloudPath survey that IDC recently released where it surveyed 935 IaaS customers on their satisfaction with top IaaS vendors including Oracle, Amazon Web Services, Microsoft, IBM, and Google. Oracle IaaS, OCI received the highest satisfaction score and the biggest year-over-year score increase of all IaaS vendors. In addition, 86% of those surveyed said, they expect their spend on Oracle IaaS and OCI to increase in the future.

Following up on demand, Oracle has been opening its data centers at a break-neck pace.

We now have 26 OCI regions live around the world, edging out Amazon AWS, which currently has 24 regions, and will be adding at least another 10 regions in the next nine months.

In addition to the pandemic having pulled forward the demand for IaaS, a lot of the incremental demand has been due to the Cloud@Customer.

The Cloud@Customer initiative is aimed at making the Oracle Autonomous Database available beyond the Oracle Cloud Infrastructure (OCI) and extending it to Oracle's on-premise customers. They were not using Oracle's cloud. Given most of Oracle's customers use Oracle's database, the Cloud@Customer initiative will help upsell the Autonomous Database to customers who are reluctant to move to a cloud environment due to concerns around security, privacy etc.

The Oracle management claimed that nearly half of the major car companies across the world either use or are evaluating Oracle's compute offerings. As a reminder Larry Ellison had joined Tesla's board towards the end of 2018, having bought some 3 million shares in the electric vehicle maker earlier in 2018. Notably, the average price of those shares was c. $60 (pre-split) vs the current traded price of c. $430, a 7x return in under three years.

Coming back to the theme of cloud growth, the clear challenge for Oracle is how fast can the company transition its on-premise customer base through its Cloud@Customer initiative. While the commentary around the underlying components has been quite favourable over the last many quarters, the overall revenue growth has remained stagnant due to a large legacy base. We think that the fillip to the OCI transition from Cloud@Customer is likely to see significant momentum over the coming quarters. We estimate Oracle did cloud revenues of $10 billion last fiscal and is expect cloud revenues to grow to $12.7 billion this fiscal. 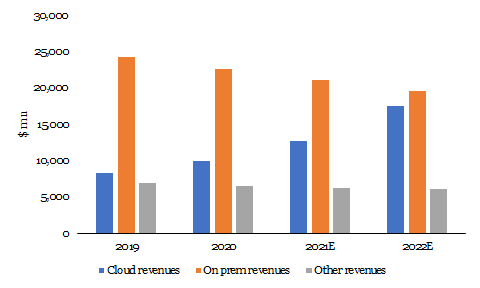 Also, earlier the Zoom deal and now the backend for managing TikTok is likely to make customers take further notice of OCI.

Another interesting aspect is how Oracle characterizes its license revenues.

Since customers can use Oracle's licenses in Oracle's cloud to get significant discounts in the cloud, license revenue has also led to an uptick in the cloud revenues. Furthermore, there is little doubt about the capability of the company to generate cashflows. As the revenue mix increases in favor of cloud, the operating margin and FCF are likely to see an improvement.

We further think, that in 2022 and beyond, Oracle's growth could expand beyond its existing customer base and lead to sizeable market share gains across IaaS and SaaS markets.

On a P/FCF basis, Oracle is the most inexpensive. One of the key reasons for this undervaluation is the lack of overall revenue growth, something that the other companies have seen.

Even at a 17x multiple to this year's FCF, the stock is ripe for a 30% upside. Considering that we expect growth to accelerate, Oracle's P/FCF multiple is likely to go up. Even at a conservative 25x, we are looking at a potential doubling of the stock price.

We have been quite bullish on Oracle ever since the launch of OCI. While consensus had been trying to figure out whether OCI's technological advantage can take share from the incumbents, along expected lines, Oracle's commentary every quarter has been turning increasingly promising. The downside has been the company's legacy businesses and the consequent drag to the overall revenue growth. We think the increase in OCI and Autonomous Database will now start outpacing the decline in the on-premise business with this year's growth possibly coming in higher than the management guidance. Overall, we continue to be bullish on the stock and expect it to surprise the most bullish among the consensus.

Ideas similar to the ones discussed in this article take a lot of time to develop. We run the Absolute Return Ideas on Seeking Alpha that discusses more frequent, shorter-term trading bets based on back-tested strategies. Join us for a free trial now!

High Watermark Investments
1.76K Followers
HWI is a combination of human and algorithmic intelligence looking at obvious, but missed opportunities across sectors.Our calls are generally long term and based on rigorous analysis behind them.
Follow