More cost cuts in Q3 may not be able to keep margins from declining. Demand destruction continues in oil markets.

Servicing its $17 billion debt load amid an uncertain economy could be a challenge. Sell the stock. 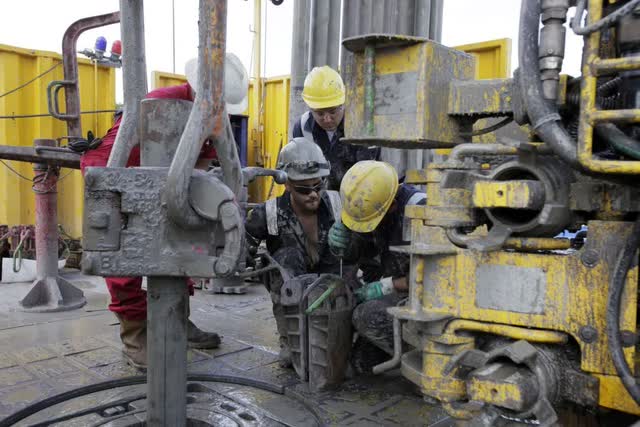 Schlumberger (SLB) reports earnings October 16th. Analysts expect revenue of 5.38 billion and EPS of 0.12. The revenue estimate implies a decline of over 30% Y/Y. Investors should focus on the following key items.

North American land drilling market was one of the hottest sectors in the oil services market. Two years ago, Schlumberger stepped up its investment in the region after acquiring Weatherford's pressure pumping assets. The move allowed the company to better compete with Halliburton (HAL) and Baker Hughes (BKR). The U.S. rig count fell consistently after deal was announced; E&P in the oil patch was not far behind, and the pandemic amplified those headwinds. 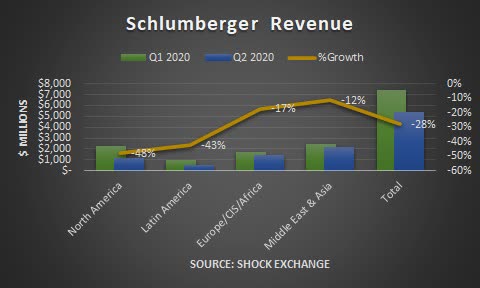 Revenue from North America fell 48% sequentially and 58% Y/Y. The North America rig count fell 61% Y/Y, connoting declining E&P and completion activity in the region. Clients cut E&P last year as budget exhaustion set in. The pandemic created demand destruction in oil markets, causing E&P to crater. For the week ending October 9th, the rig count was still off over 60% Y/Y; it rose modestly week over week. However, with oil prices below $45, headwinds for E&P will likely continue.

International revenue was $4.1 billion, down 19% Q/Q. Latin America and Africa experienced the largest declines internationally due to demand destruction caused by the pandemic. I expect the global economy and international markets to remain depressed until the pandemic subsides. Cameron's revenue of $1.0 billion fell 19% Q/Q. It experienced lower revenue in North America related to Surface Systems and Valves & Process Systems. I expect Cameron (less than 20% of revenue) to face serious headwinds and declines in orders at current oil prices.

Schlumberger, Halliburton and Baker Hughes have been cutting costs to preserve capital and margins. Last quarter, Schlumberger reported a gross margin of 8%, down 300 basis points versus Q1. R&D and general administrative costs were a combined $223 million, down 26% sequentially. Management cut into these expenses as its top line fell, which was prudent, in my opinion. Still, these costs fell less than revenue. EBITDA was $812 million, down 39% Q/Q. EBITDA margin of 15.2% was off 260 basis points versus Q1. It was also less than the EBITDA margins the company has enjoyed in the past (north of 20%).

Schlumberger's management team is known for managing costs and navigating through volatile oil markets. That explains the recent restructuring that will involve laying off 21,000 employees:

During the quarter, we recorded $3.7 billion of pretax charges. These charges primarily relate to workforce reductions, the impairment of an APS investment, and excess assets. You can find details of the components in the FAQs at the end of our earnings press release.

Other than the $1 billion of severance, the rest of the charges are largely non-cash. The charge relating to severance covers both the permanent fixed-cost reductions we are implementing as part of the Company restructuring as well as the variable headcount reductions we are executing to adjust to the reduced level of activity. It is important to note that these impairments were all recorded as of the end of June. Therefore, our second quarter results did not include any benefit from reduced expenses as a result of these charges.

The layoffs and the sale of the hydraulic fracturing operations are attempts to wring costs out of the business and cut losses. I expect even more cost cuts in Q3. However, until the pandemic subsides, revenue and margins could continue to falter. Demand for oil may not justify more E&P in the oil patch, which means such headwinds could persist until Q1 2021.

Oil services firms must maintain ample liquidity to survive volatile oil markets. The bigger firms like Schlumberger and Halliburton could be better-positioned than smaller firms. At the end of Q2, Schlumberger had $3.6 billion in cash and securities and $2.7 billion in working capital. Working capital included over $3.0 billion in inventory that could become stale amid falling revenue. The company needs to pare inventory, and it could be a key item to watch in Q3.

Free cash flow ("FCF") through the first six months of 2020 was $1.0 billion, up from $617 million in the year-earlier period. The company reduced capital expenditures to $658 million in the first half of the year from $817 million in the year-earlier period. I expect deep cuts to capital expenditures for the rest of the year in order to preserve liquidity. Schlumberger has a debt load of $17.4 billion, which is about 3.1x EBITDA. If credit metrics deteriorate this quarter and the next (a real possibility), then it could become a cause for concern.

SLB has a $36 billion enterprise value and trades at 6.4x EBITDA. Servicing its $17 billion debt load amid an uncertain economy could be a challenge for Schlumberger. I rate SLB a Sell.

Follow Shock Exchange and get email alerts
+
Add a comment
Disagree with this article? Submit your own.
To report a factual error in this article, click here.
Your feedback matters to us!