On July 12, 1983, I was at Stadion Kranjčevićeva in Zagreb - today the capital of Croatia, but at that time a chief town of former Yugoslavia - attending a Dire Straits "Love Over Gold Tour 1982-1983" concert. I was 23 at that time. Before that event I had only listened to the band's first album, simply titled "Dire Straits." Although I was more a fan of Genesis when that first album came out, I liked the full-bodied and harmonic sound of Dire Straits. When some local friends invited me to accompany them to the Dire Straits concert, I accepted.

As the concert began, the MC announced "For the first time live in Yugoslavia… Dire Straits!" and Mark Knopfler jumped on the stage and started playing. I still remember a long, thick, grueling version of their hit, "Sultans of Swing." That song conquered the audience… and me too!

I was in Zagreb that July to practice the local idiom in preparation for a degree in Slavic languages. I ignored the existence of financial markets and had absolutely no idea of what stocks, bonds or funds were. I had never heard of stock trading, forex, or options; I never imagined that one day I would invest in something other than a bike or a scooter (provided such things are considered investments, of course).

Since then, life has run its course and, at 60, I find myself embracing the rhythms of closed-end funds much as I did the Dire Straits song "Sultans of Swing." CEFs are proving to be the investment "sultans of swing" as I attempt to achieve a balance between the exploitation of their advantages and the avoidance of their pitfalls. So far, the Dire Straits version was a lot more fun than the CEF version.

Almost one year ago I decided to build a CEF-based portfolio tailored to my own financial goals. I named it the Cupolone Income Portfolio (a name inspired by the "Big Dome" in my hometown, Florence). At that time, I wrote two articles ("Comparing Morningstar Ratings And Total Returns" and "A New Year's Resolution For 2020"), in which I explained the rationale behind my fund choices. In particular, I placed special emphasis on the net asset value (NAV) performance since inception when identifying candidates for my portfolio.

In the end, my new portfolio included 15 funds, one of which was BlackRock Health Sciences Trust (BME). Fast forward to a year later. BME turned out to be the lowest-yielding CEF in my income portfolio even though it has a moderate volatility due to the absence of leverage. I decided to sell its last tranche at $44, netting a 25% gain over my load price on the whole position.

With BME no longer part of my investment strategy, my portfolio is now comprised of the following 14 funds:

As some of my readers have noted in comments on my previous articles, a few of these funds overlap in some way. Despite this, I remain comfortable with my initial choices and find them consistent with my financial goals.

The following table shows the percentages and load prices for the funds in my portfolio after clearing out my BME position and reinvesting the proceeds in all of the remaining funds. 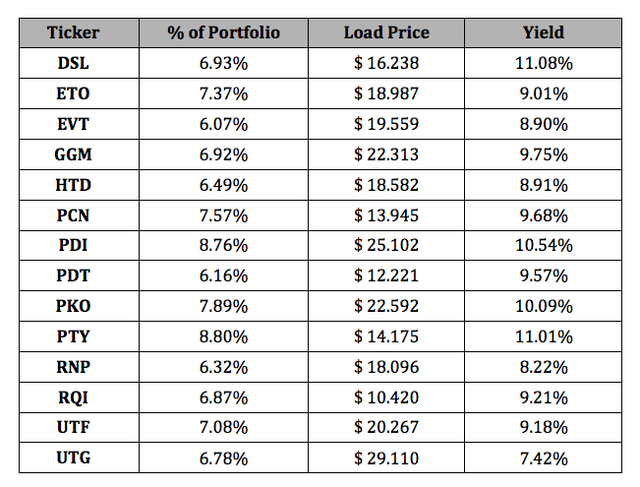 Note: I fully maintained my old position in GGM, which I built some years ago.

Trends in the NAV Since Inception Metric

In the year since I wrote my first articles about my new portfolio, and while the world is still in the midst of an unimaginable pandemic that has upended our lives - a pandemic that is far from disappearing - it's time to further examine the NAV performance of the remaining funds in my portfolio. In my last article, "Across The Ford," I examined how the CEFs in my portfolio have performed since the market hit its maximum on February 19, 2020. That article only looked at how my funds have evolved in 2020. Now let's look at how each fund's NAV since inception behavior has evolved.

In the following charts the blue line represents the price trend; the green line represents how the NAV since inception has evolved. Note: All data is as of October 12, 2020.

DSL NAV shows a 31.50% loss since inception, with a relentlessly declining trend line. It has partially recovered during 2020. DSL is one of the funds I selected some years ago for my first income portfolio. Despite its discouraging trend, I continue to trust in its management team, particularly the famous CEO of DoubleLine Capital LP, Jeffrey Gundlach. At today's price, the fund pays a respectable 10.98% distribution rate with no return of capital (ROC) in its September distribution.

EVT's NAV has grown by 16.21% since inception. Over the last 10 years, it has exhibited a slow, regular upward trend. At today's price, it is paying an 8.68% distribution rate with no ROC in its September distribution and a very small ROC percentage YTD.

GGM's NAV has fallen by 24.62% since inception, with a slow, regular downward trend. At today's price it pays a respectable 11.76% distribution rate, with no ROC, so far, in 2020. (I fully maintained my old position in GGM, which I built some years ago. It is currently paying a 9.75% distribution rate at my load price.)

PCN NAV has fallen by 9.37% since inception. Over the last ten years it has exhibited a swinging lateral trend. At today's price it pays an 8.36% distribution rate with no ROC in September and a small ROC percentage YTD.

PDT's NAV has grown by 19.56% since inception. Since 2010 it has exhibited a regular upward trend. At today's price it pays an 8.95% distribution rate with a worrisome ROC of about 31% in last three months.

PTY's NAV has fallen by 11.24% since inception. Since 2010, it has exhibited a swinging lateral trend. At today's price, it pays a 9.35% distribution rate with no ROC in September and a YTD ROC of approximately 10%.

Still Far from the Top

As shown in the previous section, eight of the CEFs in my Cupolone Income Portfolio currently have a declining NAV since inception trend line. Of these, four are PIMCO CEFs, although PDI NAV suffers just a slight 1.66% loss. Despite these - hopefully momentary - negative results, I remain a PIMCO fan and still believe that its fixed-income funds are strong income generators. The remaining six CEFs in my portfolio show convincing good results, with UTG being the undisputed leader, followed by ETO and UTF in pole position.

The main takeaway from my analysis is that most of my funds have recovered from the downturn caused by the March sell-off. However, there's still a long way to go before the since-inception NAV performance of my CEFs returns to positive territory.

Meanwhile, although ETO cut its distribution in May, the distributions from all of the other CEFs have remained in line with previous distributions. That's something to note in the face of rivers of ink predicting massive cut distributions that, at least for my funds, have not yet shown up.

If I Were a Fund Manager…

...I'd be concerned about the ongoing market situation. I'd work all day to drive my boat into calm waters, I'd concentrate all my efforts in maintaining my distribution policy, and I'd laugh about all people constantly making predictions on what I, as a fund manager, should do, will do or will have to do. One person sounds a warning on the income coverage of my fund, another suggests that I'll suspend or cut distributions, a third one recommends buying my fund while the fourth one instead advises selling it… It all seems "much ado about nothing."

We all have to respect other people's jobs, so if I were a fund manager I would keep on working, show the soundness of my management efforts through distribution consistency, and suggest that we embrace the advice from our greatest poet, Dante Alighieri, in his masterpiece, the Divine Comedy. In this poem, he advised the human race to rest content in simply facing facts, without asking why: "State contenti, umana gente, al quia."

Guido Persichino
2.55K Followers
I graduated in Languages in 1988, and then worked for 25 years as an editor at various publishing houses. In 2005, fate turned my attention to the world of finance, and when I lost my job in 2013, I decided to dedicate myself to it. In particular, I focused on building an income portfolio based on ETFs and CEFs. Although I have never worked as a Financial Advisor, I believe that sharing my experiences with managing my own income portfolio can provide others with helpful insights for their own portfolios.
Follow

Disclosure: I am/we are long DSL, ETO, EVT, GGM, HTD, PCN, PDI, PDT, PKO, PTY, RNP, RQI, UTF, UTG. I wrote this article myself, and it expresses my own opinions. I am not receiving compensation for it (other than from Seeking Alpha). I have no business relationship with any company whose stock is mentioned in this article.