There are three reasons I continue to be bullish on midstream as an industry.

In a rising inflation environment, hard assets are a great hedge in addition to a generous source of growing income.

This article was co-produced with Dividend Sensei.

Since the beginning of the year, I’ve been writing one (or sometimes two) weekly non-REIT (real estate investment trust) articles on Seeking Alpha.

This has enabled me to become a better investor by diversifying my own retirement portfolio. It’s also made me a better analyst, expanding my ability to assist readers in selecting non-REIT dividend-paying stocks. 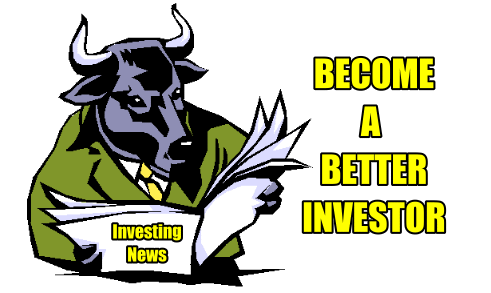 In this, thanks to Dividend Sensei, we’ve done a lot of focusing on the midstream sector. And this one is right along those same lines.

As such, we once again have to acknowledge the obvious. To say this sector has suffered for years would be an understatement... 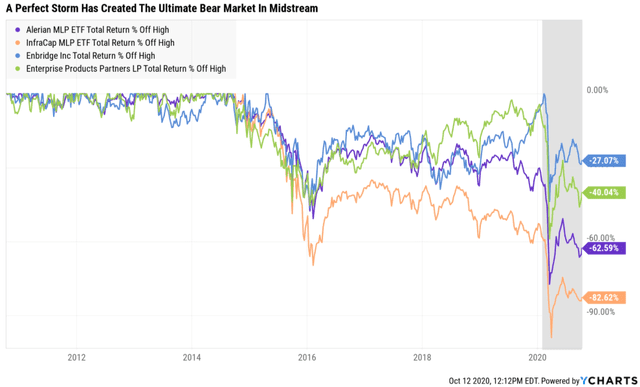 From the greatest bubble highs in industry history in 2015, to this year’s miserable lows, the midstream category has suffered monstrous returns. Even the highest-quality and safest names like Enterprise (EPD) and Enbridge (ENB) have failed to deliver the past five years.

So the most patient value investor focusing purely on a company's strong and growing fundamentals might be forgiven for losing faith in this industry.

But there are three reasons we continue to be bullish – specifically about the safest and highest-quality blue-chip names that offer ultra-high but safe yields.

According to midstream maven Dividend Sensei, 2021 could be the year when such companies and other undervalued hard assets finally shake off their Wall Street blues and reward their faithful. 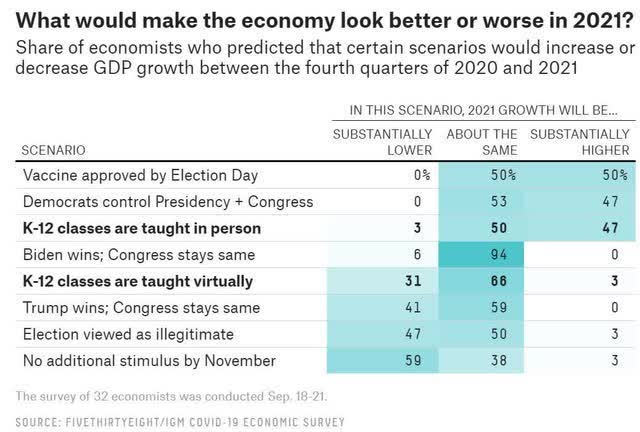 A recent survey of 32 quantitative economists by the University of Chicago and ABC News’ site FiveThirtyEight found that the prospects for up to $2 trillion in stimulus in early 2021 – Goldman's new base-case forecast – would cause half of economists to significantly increase 2021 GDP forecasts. 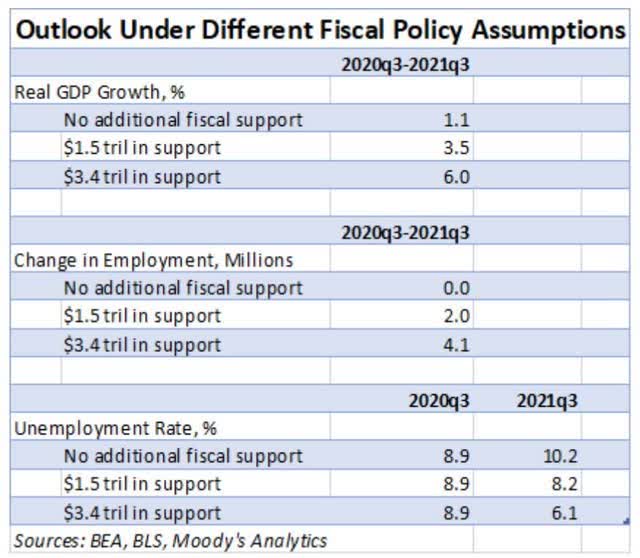 Meanwhile, Moody's – one of the 16 most accurate economists (along with Goldman) out of 45 tracked by MarketWatch – estimates that, for every $1 trillion in stimulus next year, GDP growth will benefit by 1.4%-1.6%.

A booming economy would then likely raise inflation expectations. And do you know what assets make great inflation hedges?

In the last 20 years, we've had five years of very strong economic growth driving high inflation. This has ranged from 3.2% to 3.8%, with real assets outperforming the S&P 500 80% of that time.

But even if we don't get a big spike in inflation in 2021 or 2022, there's another reason we’re bullish on such assets going forward.

Back in 2000, value stocks in general and midstreams in particular:

Rather than focus on cash flows, retail investors at the time were driven into a mad frenzy over tech names – regardless of actual profits reported and despite some of the most insane price/sales ratios ever.

Does any of that sound familiar? If so, it should.

Today, we find ourselves in a very similar situation. Some would even say they’re identical, with many investors already declaring "value is dead. Long live tech stocks!"

On the one hand, Dividend Sensei gets that mentality (just like I understand the housing bubble a little too well). As he freely admits, he lost half his life savings chasing those names at the turn of the century.

Looking back, he wishes he’d been investing in the highest-quality hard assets when the market hated them most. But he didn’t learn that lesson until after March 24, 2000, when the S&P 500::

In contrast, hard-asset blue-chips like Realty Income (O) and Enterprise were trading at 9%-11% safe yields. They were offering 50% discounts to historical price/cash flows. And they were literally priced for -3% to -10% compound annual growth rate expansion – for forever – according to the Graham/Dodd fair-value formula. 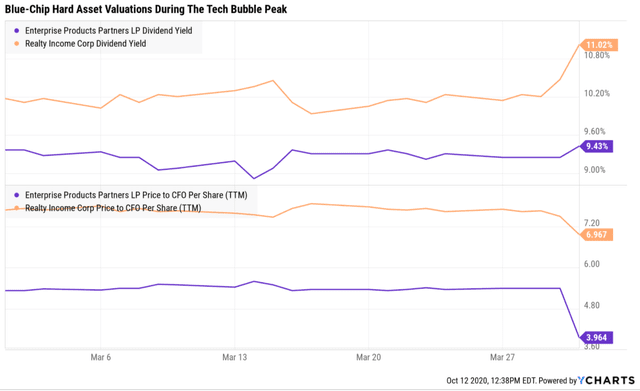 EPD, O, and Berkshire Hathaway (NYSE:BRK.A) (NYSE:BRK.B) were all 50% undervalued at the peak of the tech bubble. Investors didn't want to think about cash flow, yield, valuation, or any of those "quaint fundamental investing principles."

They wanted to run with the herd. And so they got eaten with everyone else as a result. 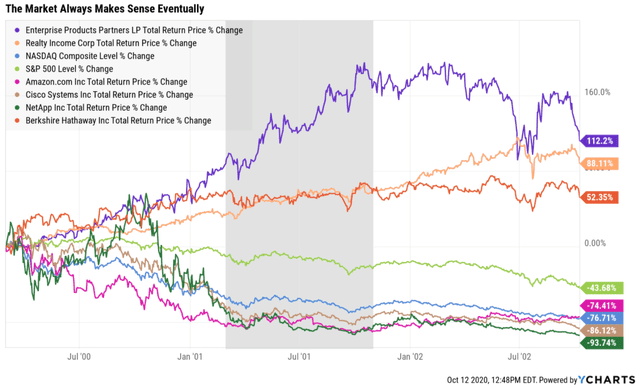 During the consequential crash:

Of course, we have no way of knowing when the tech bubble 2.0 is going to burst. We only know that it will.

In which case, we’d rather buy in something that’s far less risky as we head into 2021. 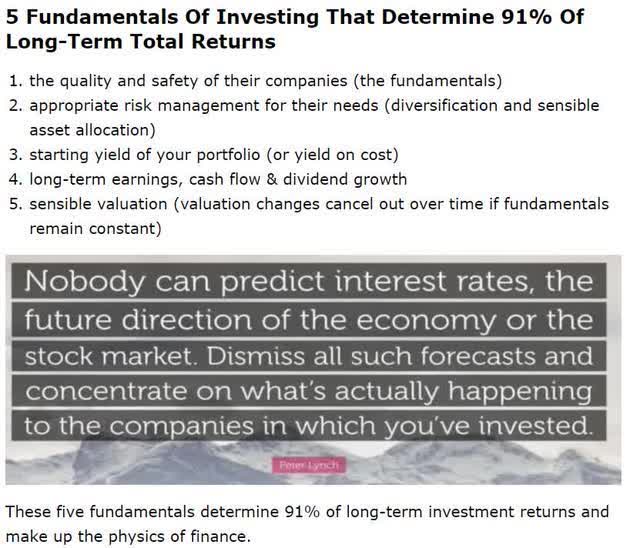 Far from market timing, we focus on the fundamentals – like the five core principles that determine 91% of investing success over time. Though, to accurately calculate those, we do need to understand the times we’re working within, and looking forward to. 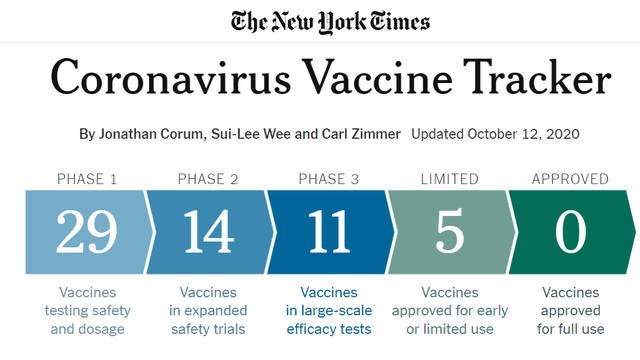 There are 136 vaccines in development right now for COVID-19. And at least nine of them are in phase 3 human trials, which is the last step to approval.

By mid 2021, the CDC's Robert Redfield expects every American to have access to a vaccine – free of charge.

Now, no vaccine is 100% effective. However, the FDA is planning to approve any safe offering that's at least 50% effective. And at least biotech company Moderna (MRNA) foresees its vaccine being 60% effective, based on phase 2 trials.

Assuming that competing vaccines also are 60% effective, and assuming that not everyone will choose to take them, about 50% of the U.S. population would become immune to the coronavirus.

That's not quite up to the 60%-70% herd immunity healthcare experts like Dr. Fauci think necessary to end the pandemic. But it will almost certainly cause viral transmission rates to plunge.

That means we'll be able to safely reopen much more of the economy. Combined with the $2 trillion in stimulus Goldman now estimates in its base-case forecast, that could lead to the labor market healing at a rate so fast it will make grown men weep with joy. 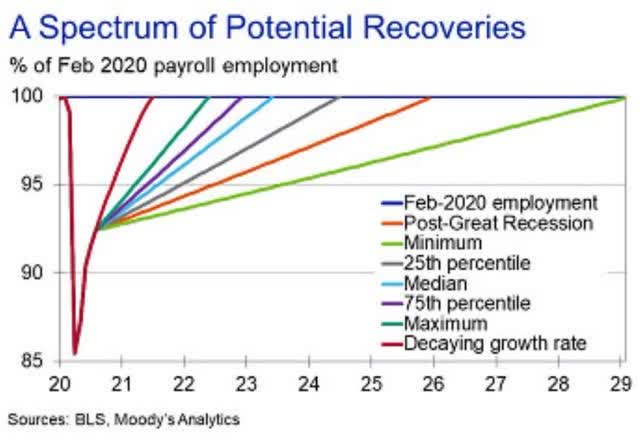 Moody's latest economic forecast estimates we'll return to 3.5% unemployment – last seen in February 2020 – by the end of 2023. Though it's possible we see that by the end of 2022 if enough Americans get vaccinated and the stimulus is big enough.

In other words, the worst jobs crisis in history could be over after just three to four years.

A Closer Look at Interest Rates

If that kind of recovery timeline is true, then we need to consider inflation and interest rates.

Moody’s believes that long-term interest rates would “steadily increase in 2021 onward, with the 10-year rate reaching 4.1% by 2030.” That inflationary activity should especially ramp up in 2022 on stronger economic growth than the bond market is currently expecting.

Yet Moody's has a rather bleak opinion about today's tech bubble 2.0. 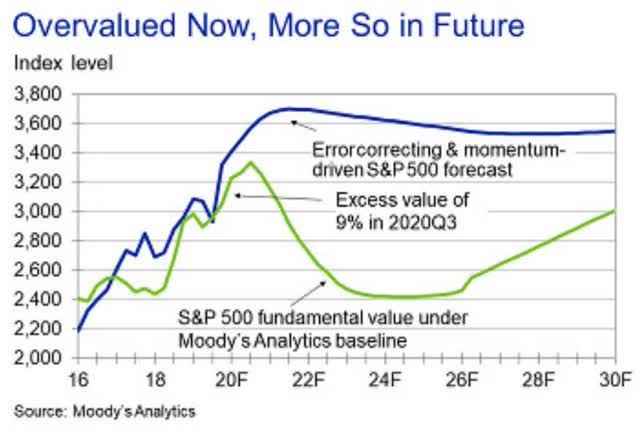 In short, it expects a multi-year bear market, barring a significant change in the equity-risk premium – a measurement that’s been stable for the past 20 years, according to UBS and Goldman, both of which expect it to remain so in the future.

Regardless, guess what doesn't justify a 23x P/E on stocks or 30+ multiples for tech darlings? Long-term rates eventually going back to 2%-3%. which also is what the Fed and Congressional Budget Office expect.

Again, how the future plays out exactly is unknown. But looking at hard asset blue-chips’ fundamentals, whether they be the highest quality midstream names or beaten-down REIT blue-chips, the reward/risk ratio is astonishingly attractive.

We’re not going "all in" by taking dangerously concentrated positions in anything right now, no matter how good it looks.

But if the blue-chip economist consensus is right and we get a vaccine and a big stimulus next year? Not only will hard assets likely do very well in 2021, they could also kick off a 10- to 15-year bull market.

We’re talking the kind that could prove what prosperous retirements are made of.

Realty Income, for one, is a 4% CAGR-growing REIT blue chip. Yet those who bought it when the market hated it the most were able to enjoy 18% CAGR total returns for the next 15 years.

This is the kind of high-yield blue-chip magic that patience and sound long-term investing strategies can generate.

That is if you focus on what matters and ignore the market noise.

At iREIT, we're committed to assisting investors navigate the REIT sector. As part of this commitment, we recently launched our newest quality scoring tool called iREIT IQ. This automated model can be used for comparing the “moats” for over 150 equity REITs and screening based upon all traditional valuation metrics.

Join iREIT NOW and get 10% off and get Brad’s book for FREE!

Disclosure: I am/we are long EPD, PBA, FRT, BXP, O. I wrote this article myself, and it expresses my own opinions. I am not receiving compensation for it (other than from Seeking Alpha). I have no business relationship with any company whose stock is mentioned in this article.

Follow Brad Thomas and get email alerts
+
Add a comment
Disagree with this article? Submit your own.
To report a factual error in this article, click here.
Your feedback matters to us!