Ionis (NASDAQ:IONS) recently completed the acquisition of its mostly owned spin-off, Akcea Therapeutics. The spin-off of Akcea began back in 2015, when Ionis was still called Isis Pharmaceuticals. I questioned the point of it when the company had its IPO in 2017. The purpose of this article is to look at the potential long-term value of Ionis, not to analyze whether the spin-off and re-merger dance was beneficial to stockholders.

Ionis Pharmaceuticals is arguably the current leader in RNA-based therapeutics, though the competition has become fierce. Ionis has three approved therapies. Two are wholly owned and one is licensed to Biogen (BIIB). The focus of this article is not the potential revenue, but the broad clinical and preclinical pipeline of potential therapies. Post merger cash, debt, and revenue will be presented first, to set the background.

The assets, liabilities, capital, and revenue of Ionis will become clearer when third-quarter results are released, likely around November 4. Meanwhile, I can only provide estimates based on Q2 results and note that Ionis owned about 76% of Akcea at that time. I see no reason to guess at inter-company accounting, given that we will shortly be enlightened on the combined companies.

Clearly, Ionis is in great shape on the cash front, with net cash of about $2 billion at the end of Q2. Some cash would have been used to buy the Akcea stock Ionis did not already own. Because of the heavy R&D budget, it is not typically profitable except in quarters when significant milestone payments are received from collaborators. On a GAAP basis, Akcea lost $50 million in Q2 2020, or $0.49 per share. Ionis had a net GAAP loss of $32 million, or $0.23 per share. Ionis did report $8 million in non-GAAP net income.

In Q2, the main source of commercial revenue for Ionis was royalties from Biogen for Spinraza for SMA (spinal muscular atrophy). Ionis reported Tegsedi and Waylivra revenue of $16 million, the bulk being from Tegsedi. Akcea reported $16.4 million in commercial revenue from Tegsedi and Waylivra, which is the same revenue as reported by Ionis, which is why revenue is not added in the right column in the table shown above.

All three drugs are subject to competition. I believe Spinraza royalty revenue has potential to grow modestly. Waylivra has just started sales in Europe, and while it will benefit patients, I will be surprised if it is a high revenue generator. Tegsedi sales growth is already slow. So, while the revenue is nice, I consider Tegsedi and Waylivra to be proof-of-concept drugs. They indicate that the remaining Ionis pipeline candidates have a strong chance of receiving regulatory approvals. Several of them have the potential to produce far more in royalties or commercial revenue than any of the three currently commercial drugs. The main value of Ionis is still in the future.

Ionis has clinical-stage drugs in collaboration with Novartis (NVS), Pfizer (PFE), Roche (OTCQX:RHHBY), Bayer (OTCPK:BAYRY), AstraZeneca (AZN), Suzhou-Ribo, Biogen (BIIB), Dynacure, GlaxoSmithKline (GSK), ProQR (PRQR), and Jansen (JNJ). To keep this article to a reasonable length, only three drugs in this group will be detailed. For the full list see the Ionis pipeline page. My criteria for the drugs I am covering include potential revenue, closeness to final data readouts, and the unmet medical need for the disease targets. Generally, Ionis has partnered with more established companies for therapies that might have broad application and thus require a large, established sales force.

Pelacarsen is partnered with Novartis for CVD (cardiovascular disease). It was previously known as AKCEA-APO(a)-LRx. It is designed to reduce apolipoprotein(a) in the liver to offer a direct approach for reducing lipoprotein(a) or Lp(a), a risk factor for atherosclerosis, coronary heart disease, and stroke. Currently, there is no effective drug therapy to significantly lower elevated levels of lipoprotein(a). Lifestyle modifications, including diet and exercise, do not impact Lp(a) levels.

Novartis licensed Pelacarsen in February 2019. The company has development responsibility. Ionis (with Akcea) received a $150 million license fee. Other financial details of the collaboration agreement were not disclosed but would typically include milestone payments and royalties. Positive Phase 2 Pelacarsen trial data were published on January 2, 2020. The data showed the drug can get 98% of patients below the established threshold for Lp(a)-related CVD in people already taking statins.

Vupanorsen is partnered with Pfizer for CVD. It had been a possible option choice for Novartis. After Novartis decided to concentrate on Pelacarsen, in November 2019 Pfizer swooped in for a worldwide exclusive licensing agreement. Pfizer is responsible for all development and regulatory activities and costs beyond those associated with the Phase 2 study to lower triglyceride levels. Ionis received a $250 million upfront license fee and is eligible to receive up to $1.3 billion in milestone payments and double-digit royalties. Pfizer plans to evaluate Vupanorsen in a Phase 2b study of statin-treated patients with elevated non-HDL-C and high triglyceride levels in 2H 2020.

BIIB094 (ION859) is partnered with Biogen for Parkinson's disease. Biogen has an option to acquire it from Ionis. It uses antisense RNA technology to reduce LRRK2 protein, which is associated with the disease. Phase 1 data is expected in 2022. But note that Biogen also collaborating with Denali Therapeutics (DNLI) for DNL151, a small molecule which also targets LRRK2. While the two drugs have the same target, they have different mechanisms of action. BIIB094 is one illustration of the Ionis collaboration with Biogen, which also has optioned therapies for Amyotrophic Lateral Sclerosis, Alzheimer's Disease & Frontotemporal Degeneration, Angelman syndrome, and an undisclosed neurological disease.

IONIS-ENAC-2.5Rx for cystic fibrosis had Phase 1 top line data announced on October 13, 2020. It demonstrated significant decreased in ENaC expression in healthy subjects. It was the first time an antisense RNA medicine delivered directly to the lungs worked. Most RNAi and antisense drugs work in the liver. Note the drug has not yet been tested on patients with cystic fibrosis. A study to test its safety and effectiveness for COPD associated with chronic bronchitis is expected to start later this year. Currently, cystic fibrosis therapy is dominated by Vertex (VRTX), which sold over $1.5 billion in CF medications in Q2 2020.

IONIS-AGT-LRx is for treatment-resistant hypertension, which remains a major contributor to cardiovascular and renal disease and affects about 3 million people in the United States. IONIS-AGT-LRx reduces the production of angiotensinogen. Data from two Phase 2 trials is expected in 2020. If this therapy reaches commercial status, it could be a very large revenue driver, depending on pricing and market penetration.

Danvatirsen for STAT3-involved cancer is included here mainly to show how diverse the types of diseases are that antisense RNA technology may be able to treat. The Ionis cancer therapy pipeline, including preclinical candidates, is getting to be broad in itself: 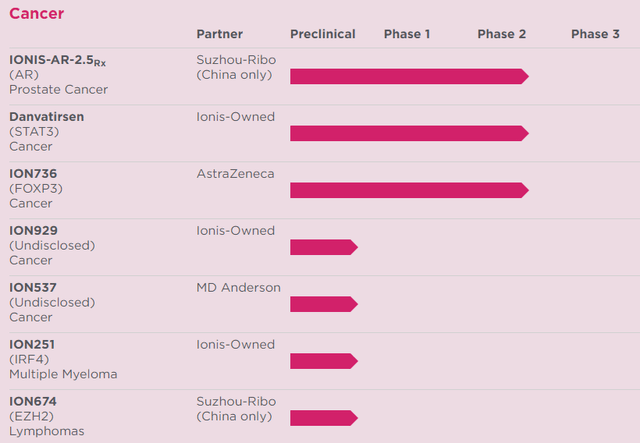 Valuing the future involves a lot of assumptions, also called guesses. My clear and consistent guess with Ionis is: Up. The size of the pipeline is more typical of a large-cap pharmaceutical company. The partners are impressive. The technology is proven, with revenue coming in from three approved drugs. At the closing stock price of $47.20 on October 19, 2020, the market capitalization of Ionis was $6.6 billion. I do not know of another company so well-positioned with this low of a market cap. Nevertheless, the usual caveats apply. With so many therapies, some will not end up generating approvable data. Most of the therapies will have competition, if only older, less-active therapies, if they do get regulatory approval. Pricing, what insurers will pay, is hard to predict. The potential high patient numbers and high revenue therapies need Phase 3 trials, meaning those revenue are two to three years away. I think there will be many data points along the way that drive the stock price higher, but the ultimate drivers will be revenue and earnings. Those, more likely than not, are going to accelerate as this decade progresses.

Disclosure: I am/we are long IONS, BIIB. I wrote this article myself, and it expresses my own opinions. I am not receiving compensation for it (other than from Seeking Alpha). I have no business relationship with any company whose stock is mentioned in this article.