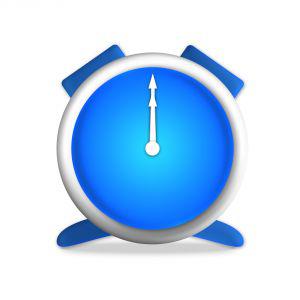 Apple is officially in runaway, fad mode. Where it stops, who knows? But there are two strong reasons to believe the run is over. The first is what's happening below the surface: Weak buying and potential selling (as yet, unleashed). The second is a mind-boggling graph showing that Apple sits atop the same peak as the Nasdaq did on March 15, 2000.

First, the forces at work and the selling ready to be unleashed

Barring a news event, AAPL now depends on three forces: (1) Investor-buyers willing to pay ever-higher prices; (2) Investor-sellers holding off on taking their profits; and (3) Short-term traders, waiting to play the short side when the time is right.

Investor-buyers - In a high-speed uptrend like we have now, buyers are often referred to as greater fools. They are the ones willing to buy because the price is higher (an upside-down demand curve). Eventually, these buyers run out money or nerve.

Investor-sellers - Committed to Apple (the company), shareholders can be slower to sell because there isn't any worrisome news, except that the price has risen abnormally fast.

Traders - Institutional and individual traders know that the easiest path for a stock to take is the one it is already following. However, they can also spot an overdone trend. That's when they have a finger poised over the "sell" button, looking for any hint of weakness.

It's this last group that are the real killers of an overwrought uptrend. When Apple (the stock) inevitably shows a weakness, they will quickly sell any long positions and happily short the stock. Low P/E? iTV coming this fall? Jobs' list of magical products? They don't care. It's the stock's action now that they focus on, and they know that AAPL's run-up without pause created plenty of weakness to be exploited.

I had two comments on my previous Apple article that shocked me. The first was that my caution was unwarranted because Apple was in a new paradigm so massive that common market sense doesn't apply. The second was that Apple's #1 market cap size wasn't a concern - rather, it was all the other companies underperforming. For those of you that invested in the 1999-2000 internet bubble, those words will bring back memories of similar erroneous beliefs.

Those memories got me wondering just how Apple was doing compared to the high-flying Nasdaq back then. Here is the comparison. 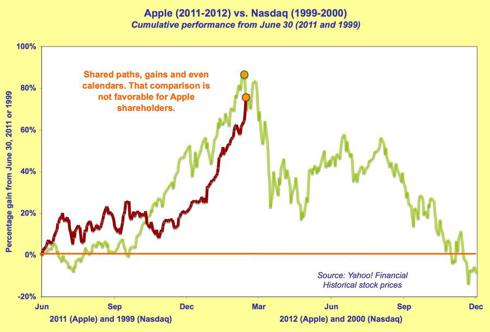 If you just said "OMG!" I'm with you. I was flabbergasted to see what Apple has done: It has single-handedly repeated the internet bubble! That is no mean feat. And given AAPL's size ($545 billion), plenty of investors are riding this whirlwind.

Apple's rapid rise from $380 to $600 has put the stock in a precarious position. It hasn't had the time to gain true investor support for that $220 gain. The speed and distance has made both investor-sellers and traders slow to provide the natural support levels that can prevent a sharp falloff from occurring. 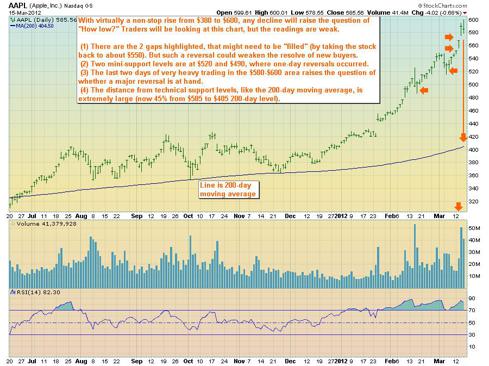 Therefore, I believe it's time to short AAPL. Could it climb further? Yes, but not much, unless we have a repeat of the tulip mania. The stock is truly overstretched, and repeating the Nasdaq's 1999-2000 path is very unhealthy.

How low can AAPL go?

A lot further than people expect. I see many comments that say the risk of a big drop is low because the fundamentals are so strong, and there are so many investors who would happily buy at a lower price. However, 220 points of straight up creates a vacuum, just the thing for fast (and scary) declines. Without visible levels of support, those potential buyers are likely to sit on the sidelines waiting for the dust to clear.

Disclosure: I have no positions in any stocks mentioned, but may initiate a short position in AAPL over the next 72 hours.