It's a standard point in economics

Sure, the people who make things profit from having made them. Or, at least, can do, for we all know of loss making producers of this and that. However, it's a standard economic assumption that everyone else gains much more from the thing having been made than the maker gains from it.

The Model-T is credited with having changed courting habits, that back seat having introduced millions of couples to carnal delights. That's rather more than Ford got out of it, vastly rich though he became. Being slightly more serious about it that we get electricity is worth much more than the $100 or $200 a month we pay for it. One recent analysis (a proper, real one) estimated that the existence of search engines and email is worth $18,000 a year to each user, vastly more than the providers of such things gain. Even Facebook is said to be worth $800 a year to each user, more than even the revenue, let alone profit, made by the company.

The same is true about a vaccine for Covid. Sure, there will be some money made out of producing an effective one. But the people who will really gain are us out here, as we can go back to doing nice things when vaccinated. It's also true that near all the potential producers - and there are still well over 100 of them trying to get their version over the line - have said that they will be supplying at cost, or perhaps a small margin over it. Not having frequent lockdowns is going to be of more benefit to the economy as a whole than whatever those producers make.

This holds true of certain producers of other things out in the economy too. Watching Covid retreating in the rear view mirror is going to change the economic prospects of some firms vastly more than it will those of the vaccine maker. One obvious sector being European short haul airlines.

Easyjet has had a torrid time of it: 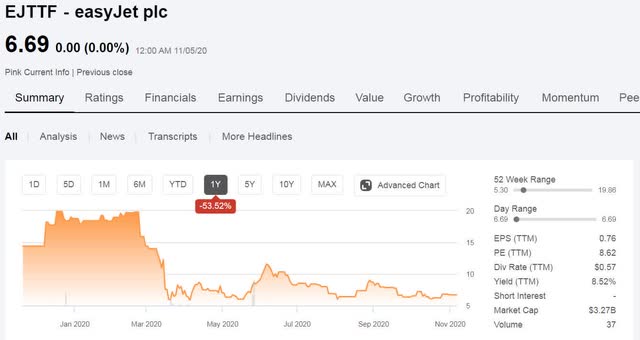 If we prefer the source:

As I explained back at the beginning of the lockdown:

The current suggestion is that for the UK at least, on visiting another country - other than Ireland and negotiations are still ongoing over France - upon return it will be necessary to at least self-isolate and perhaps quarantine for 14 days. Other countries are talking of adopting the same rule.

This will, clearly, entirely kill the summer vacation period. But more importantly for us here as investors, this will pretty much kill off air traffic.

The equivalent here is not with international travel into and out of the US, it is with interstate travel in the US. It's like going from Ohio to Florida will mean two weeks' quarantine on arrival and two more when coming back. American airlines would not gain much traffic in such a situation. And European ones even less.

These rules have varied over time and between different pairs of countries but they are now being reimposed in their strong version. One reading of the latest UK regulations is that it is illegal - actually a crime - to take a flight out of the country unless you're one of that class of responsible workers or on business. This clearly isn't good news for Easyjet.

Currently Easyjet is saying that it will run 20% of its normal winter schedule. It's also chewing through some £700 million a quarter:

But the second lockdown is likely to put fresh strain on the finances of the FTSE 250 company, which is burning through about £700m a quarter.

It's appealing to varied European governments for state aid to make sure it doesn't fail.

There's very little point in wondering about asset ratios, cash flows, profit margins and so on at present. The question is, well, will it survive? Survive until?

The until is until that vaccine. It doesn't need to be until the vaccine is in general use and the population largely protected. Rather, just until the rollout begins. For at that point we'll all be able to see that it can survive, the stock will rise and further fundraising will be possible. So, the question is can it survive until then?

That then depends upon when we think a vaccine really will be available. My guess - and no one is doing any better than guessing at present - is the spring at the latest.

Easyjet has been liberating cash - at the cost of future repayments of course - by the sale and leaseback of the planes it owns. Here:

Following high levels of demand from the operating lease marketplace, easyJet is pleased to confirm that it has engaged with a number of operating lessors to raise further liquidity, which will be used to further strengthen easyJet's financial position. easyJet confirms the sale and leaseback of nine aircraft with two counterparties. The transactions generate total cash proceeds of $398.6 million (£305.7m).

easyJet is pleased to announce the sale and leaseback of a further eleven aircraft with two counterparties. The transactions generate total cash proceeds of $169.5 million (approximately £130.7m).

Sure, this doesn't even cover their cash needs for a quarter but it adds to their resources.

And my best guess above about the vaccine means they need to last another quarter and a half or so before the skies clear.

There is also that possibility of gaining something in support from various European governments.

So, to construct the opportunity here. The deployment of an effective vaccine will aid Easyjet enormously. Sure, flights won't return entirely to normal but levels of holidaymaking will climb up off their current floor. So, the airline has to survive until it becomes obvious that there is going to be such a vaccine. At which point they'll easily be able to refinance if they need to.

This offers us a much greater amount of leverage than any of the pharma companies offering to produce the vaccine at or at about cost.

I think that the vaccine will be rolling out between the New Year and the spring. Not based upon any grand knowledge of pharma, rather that the entire global industry is focused on this and I don't expect them to fail. Also, don't forget, the European drug regulators are - amazingly - a little more relaxed than the FDA about approval of something valuable but not wholly and entirely proven as yet.

I also think that Easyjet has the finances to be able to survive until then in this cash is king world.

It's necessary to believe both of those pieces to think this is worthwhile. Only some months to a vaccine and also that the airline will survive until then. But with that then Easyjet is a leveraged punt on that vaccine arrival.

As with any punt, small amounts, risk money only. But worth a speculation perhaps.