It goes without saying: the incoming Biden administration faces a withering array of challenges. While the technical definition of recession may be behind us, the US economy remains in a deep hole. The recovery marches on with 3rd quarter GDP erasing much of the 2nd quarter downside. Still, the economy is now projected to be 2.5% smaller by year's end YOY. In the meantime, COVID-19 new cases in the US are, once again, the highest in the world. Decisions on further economic lockdowns and renewed stay-at-home mandates loom. A medical solution to the pandemic is slowly coming to nigh, as human trials for two leading vaccines are expected to deliver a verdict by year's end or early 1st quarter of 2021. Health experts the world over anxiously await the all-important safety and efficacy data from the trials. And while tentatively settling one of the most contentious US presidential electoral cycles in history, control of the Senate remains to be decided in January’s special election in the state of Georgia. 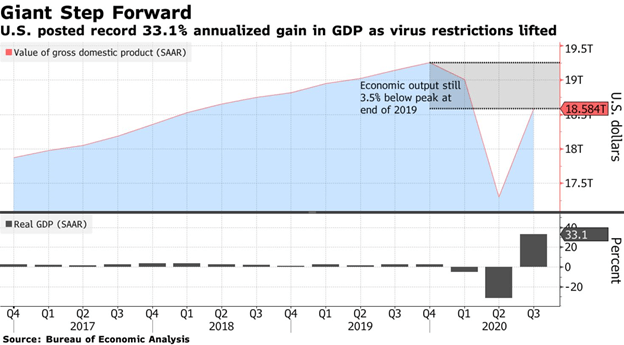 COVID-19 shuttered an estimated 22% of total US output by the beginning of the 2nd quarter. By quarter’s end, the economy had contracted a whopping 9% QOQ, or just over 31% annualized - the biggest MOM and annualized economic decline since the Great Depression.

As expected, 3rd quarter output rebounded sharply with another record post of 7.4%, or about 31.4% annualized growth, for the biggest surge of the post-WWII era. Consumer spending, about 70% of the underlying GDP measure, soared 47% QOQ as pent-up demand for goods and services sent personal consumption into the stratosphere. By way of comparison, US GDP fell by about 4% over the entire year and a half of the Great Recession of 2007 (see Figure 1, above).

Arguably, 3rd quarter GDP performance is more a measure of just how severe the 2nd quarter collapse was rather than a measure of the recovery’s relative strength to date. Industrial production fell in September. Final products, industrial supplies, as well as manufacturing and utilities all fell during the month. Current capacity utilization measures in manufacturing, mining and utilities are all currently well below 2019 annualized levels. 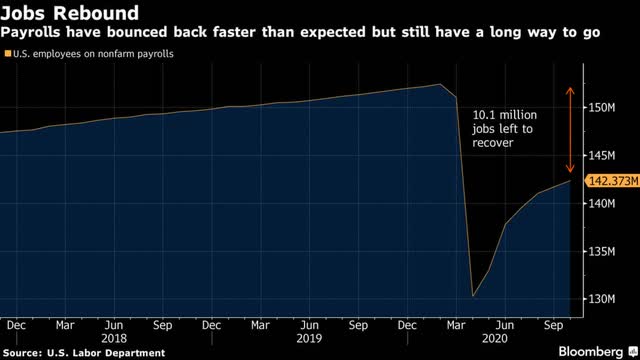 And then, there is the human dimension. The unemployment rate declined by a percentage point in October, and the number of unemployed fell by 1.5 million to 11.1 million during the month. Both the number of unemployed and the national unemployment rate have been in decline for the past six months, but are still two times that of February’s post of 3.5% and 5.8 million, respectively. Employment in leisure and hospitality jobs increased by 271,000, but still lags February levels by almost 3.5 million jobs. Retail added another 104,000 during the month, but still lags February totals by an estimated 500,000 jobs. Through October’s jobs report, about 10.1 million jobs have yet to return. And the all-important wage growth for all employees in October came to 4.65%. In February, wage growth came to 3% - a stark reminder of just how many low-income wage earners have fallen out of the computation (see Figure 2, above). Meanwhile, the US, again, comes face-to-face with the world’s largest new COVID-19 caseload at 29,913 per million - presenting the Biden administration a Faustian choice between economic and public health.

The US, not to mention much of the world, finds itself in a liquidity trap. Central banks have done an admirable job to date providing critical liquidity for businesses, households, and markets worldwide. Here in the US, the federal funds rate is at zero bound, pulling borrowing costs to historic lows for both businesses and households. The 30-year mortgage rates hit another record low in the week ending 5th November, its twelfth this year, at 2.78%. The Federal Reserve’s has committed $2.85 trillion in backstopping the US economy through the 5th of November from the 12th of March. Accordingly, the S&P 500 (grey area, Figure 3, below) is up just short of 57% since the 23rd of March.

For many, the Fed’s efforts to backstop both the bond and equity markets have been a mixed bag. Many blame the Fed for price distortions in the bond market. Others blame the Fed intervention for the outsized valuations of shares, particularly in growth and momentum stocks. Combined, these distortions simply add to heightened financial instability. Curiously, the CBOE VIX (black dotted line), the so-called fear index for the S&P 500, hit a YTD record reading of 88.69 on the 16th of March - seven days before the benchmark crashed on the 23rd of March. The VIX closed on Friday at a reading of 24.86, two notches above its long-term average of 20 - as the Fed’s market intervention ended a liquidity squeeze that allowed the market to soar to even new heights (yellow trend line), while calming market nerves in the process. Gold futures (orange line) hit YTD highs in August, while the US dollar index (red line) moved in the opposite direction from about June through Friday’s market close. The yield on the 10-year Treasury (purple line), after an initial safe harbor spike as the S&P touched bottom, flattened out in a narrow trading range for the duration. The literal decoupling of US equity markets from underlying economic fundamentals since the outbreak of COVID-19 this past spring remains extraordinary - itself a living example of the Fed’s market intervention over the period.

Figure 3: Gold Futures Contracts, the US Dollar, the 10-year Treasury against the S&P 500

Sadly, funding and maintaining a low borrowing cost environment can only go so far to stimulate demand in the greater economy. In other words, credit facilities underwrite the ability to lend, not to spend. Fiscal policy has the power to put cash in the hands of those consumers most likely to spend the funds in a demand-side downturn through direct cash transfers. Investments in infrastructure - from highway repair to hospitals to wind and solar farms - have the potential to promote sustainable growth across metropolitan areas, cities and towns across the country. The multiplier effect from these projects pump much-needed funds into the targeted communities in the form of jobs and peripheral economic growth. Historically low borrowing costs help to keep debt service costs on borrowed capital below growth rates.

The case for further fiscal stimulus remains strong. Increasing solvency risk for both businesses and households continues to grow. The details are sobering. Through the 20th of September, 6.87% of mortgage loans are in forbearance. Less than 11%, or about 4.6 million, of 42 million student borrowers are current with their loans. The student loan forbearance under the $2 trillion stimulus plan passed last spring, and extended by executive order, is due to expire at the end of the year. Mortgage forbearance is also set to expire. A COVID-19 eviction crisis for renters looms.

Monetary policy will continue to be the keystone of the recovery effort. A synchronized fiscal response from the government will be a net positive for everyone.