This article was originally published on November 5.

With the election results nearing closer, we take this opportunity to give a quick update of the CEF market and focusing on some trends that have caught our eye. In particular, we discuss the curious case of CEF underperformance of ETF sector benchmarks and touch on the persistent discount weakness across the space. We also take a look at the Muni sector given its longer duration amid sharp moves in risk-free rates.

Our main takeaway is that while pockets of the CEF space look attractive, relatively rich underlying asset valuations and a gloomier macro picture due to a split government keep us focused on a margin-of-safety approach. At the same time, we are diversifying across preferreds and baby bonds - something that has helped control the volatility of our Income Portfolios without sacrificing yield.

Though many of our watchlist Muni CEFs have revalued considerably in the last few days, a few still stand out, such as:

If we take a very big lens perspective and see how equity and fixed-income CEF price and NAV total returns have done over the past year, we get the following chart. We see very sizable drops in March, particularly in equity CEF prices, which makes sense given their more volatile portfolios as well as sharp discount widening. This is followed by a steady grind higher to levels that don't quite reach or just barely beat their starting levels from a year ago. This is, arguably, a bit surprising given that most major ETF asset class proxies are well in the green for the year. 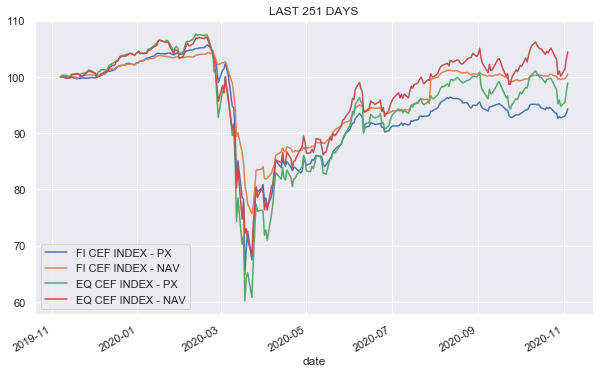 Some of this is undoubtedly due to a few outlier sectors such as MLPs that have put in horrendous performance. However, if we look sector by sector, there are only a handful of sectors that are outperforming their ETF benchmarks. The outperformance by covered call funds is arguably a gimme, given the terrible investment strategy adopted by the fund that we are reduced to using - something we discussed in more detail here. And to be fair, some sector don't have terrific open-end proxies, such as the CMBS CEF sector which allocates to lower-rated collateral than the iShares CMBS ETF (CMBS), which holds mostly AAA tranches. 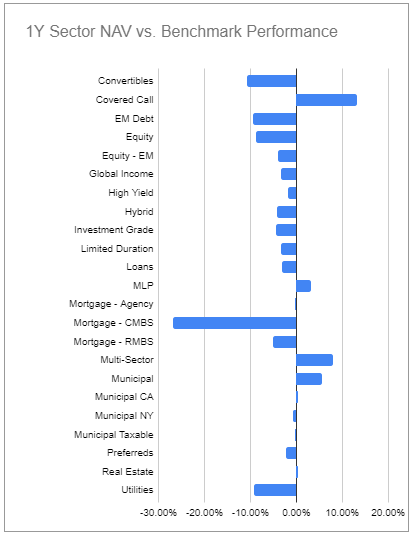 That said, most sector ETF proxies are appropriate benchmarks, and with a few exceptions, they have outperformed CEFs for the year. So, what's going on? Some sectors do have negative returns on the year, and with CEFs taking leveraged exposure, that's certainly part of the reason. However, about 70% of sector ETF proxies are in the green, so this explanation only works a third of the time.

Another reason likely has to do with deleveraging that pushed some CEFs to lock in permanent capital losses during the drawdown that they were not able to reclaim once markets bounced back. And thirdly - and this is particularly true of equity-linked sectors - is that active management is hard and most funds end up underperforming their benchmarks, according to the S&P.

The other trend that is visible in the top chart is the divergence between the price and NAV indices or, in other words, discount widening. Let's look at this more directly. The chart below shows that both equity and fixed-income discounts have trended wider over the past year. There was a strong recovery after the end of the March drawdown but a steady widening since then, so that the average equity and fixed-income CEF finds itself around 6-8% wider than a year ago. 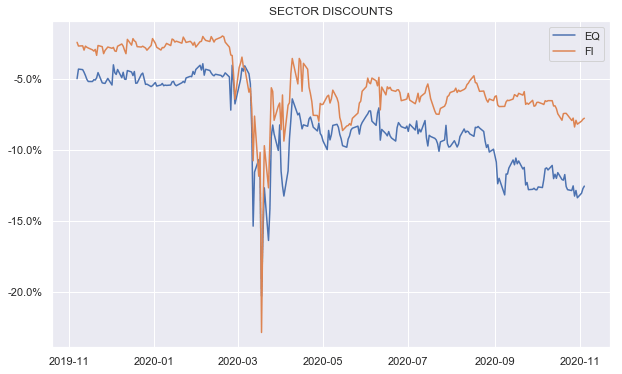 If we take a longer-term perspective, we see that the average CEF discount is trading on the low side of the past 20 years. Discounts have only moved wider on average during sharp drawdowns such as during the financial crisis, the oil crash, December 2018 Fed communication mistake and the recent COVID-19 shock. 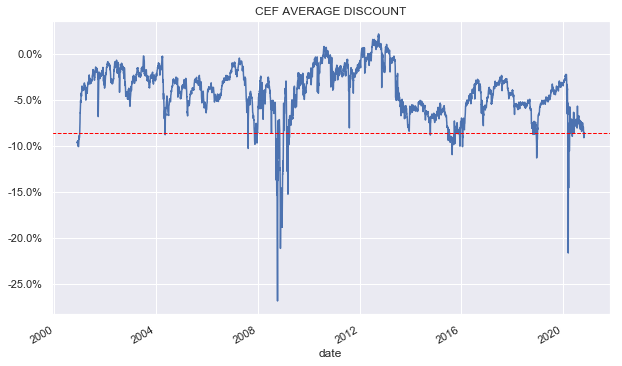 What's going on? The pattern that we are seeing is quite a break with the procyclical pattern where discounts widen with lower NAVs and then retrace tighter as assets recover. This time around, assets have recovered but discounts have refused to tighten and remain quite wide.

Secondly, leverage costs for nearly all funds that use leverage are at historically low levels. Interest rates on typical short-term borrowing instruments have fallen by 2/3rd, from over 3% to a bit over 1% for taxable funds. This means that, all else equal, CEFs can pass on higher income levels to investors.

Thirdly, asset valuations have richened considerably but remain well below their pre-drawdown levels in many sectors, such as credit, munis, preferreds and others. This should make CEFs more attractive than open-end funds given their leveraged exposure. 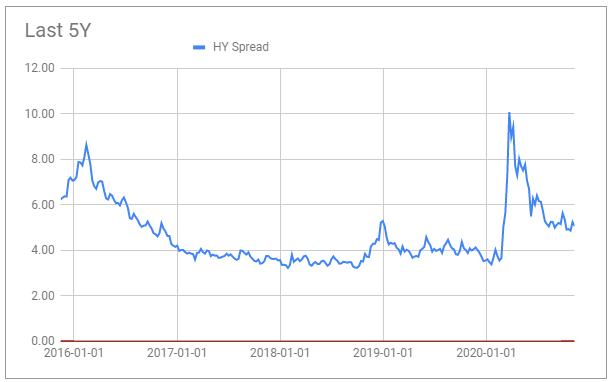 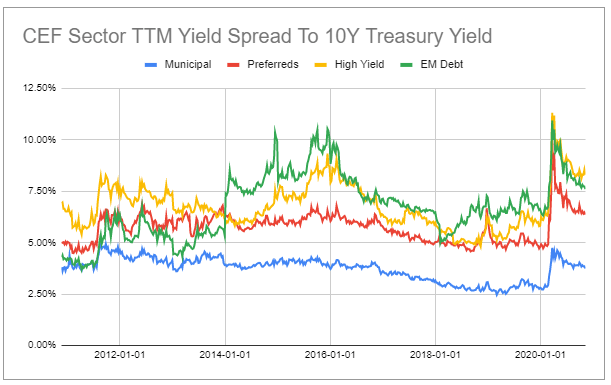 Finally, the most likely, at the time of writing, electoral outcome is a split government. This should keep risk-free rates lower than they may have been otherwise, which should allow fixed-income CEFs, in particular, to be under less pressure.

Are there reasons that discounts are as wide as they are? One driver could be tax-loss selling, which creates a kind of feedback loop of tax-loss selling pushing prices lower, which causes more tax-loss selling. Secondly, income investors have likely taken some chips off the table coming into the election, particularly as they tend to express more of their political views through their holdings. Thirdly, the market run-up, particularly in some areas such as Tech, has been optically strong, which has added to bubble-like worries. Fourthly, some investors have been burned by CEFs, particularly in some sectors such as CLO equity and MLPs, and perhaps decided to call it quits and move into something else.

At the end of the day, there is probably no single story that explains why discounts remain as wide as they are, but our view is that pockets of the CEFs space do, in fact, look attractive at the moment.

What does this mean for our positioning?

Our portfolio views are informed by a three-legged stool of CEF discounts, underlying asset valuations and a fundamental macro outlook. And while CEF discounts are indeed attractive in some pockets of the market, underlying asset valuations have been creeping higher and stand on the richer side of the post-drawdown period. The fundamental outlook has also worsened, in our view, as the likelihood of further fiscal support has diminished substantially with a split government.

This means that we are approaching CEFs relatively cautiously with a margin-of-safety approach, while controlling risk through higher-quality, shorter-duration, open-end funds and near-maturity senior securities. This has allowed our Income Portfolio to show substantially lower volatility over the last three months, while delivering attractive yields. 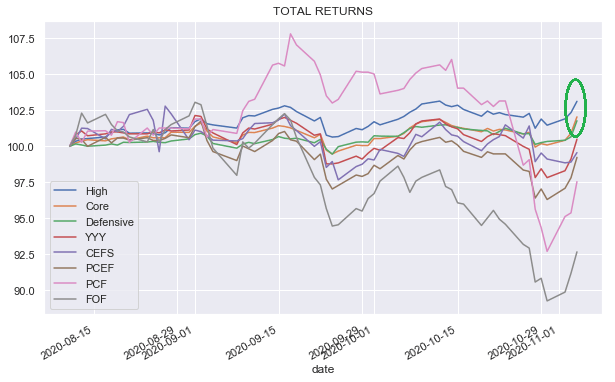 Across senior security sectors, we continue to like higher-quality BDC and CLO baby bonds and agency mortgage REIT preferreds, which offer very attractive yields for their historic resilience.

A Quick Look At Munis

Munis are a sector we have been following closely for a few reasons. First, the sector's discount has been trading on the weak side compared to the other higher-quality CEF sectors. 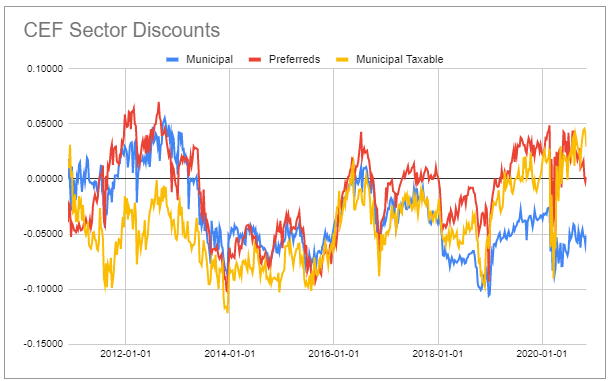 And secondly, the potential regulatory impacts of the election are particularly elevated for the sector.

From the perspective of risk, anecdotal evidence from reader comments as well as the general risk-off tone heading into election day suggest that a good many investors were relatively light on risk. Although a chunk of investors who express their political leanings in their investments may remain fearful, for the other half, the election outcome (admittedly, it is not 100% finalized) is a green light for buying assets. In other words, we don't need everyone to pile back into markets for assets to rally - so long as a significant contingent is satisfied with the outcome, we should expect a rally.

Apart from a reversal in risk sentiment, there are other factors likely to drive Munis. Lower expected deficits are pushing for a reversal of short Treasury bets, which, from a pure discounted cash flow valuation perspective, are supporting bond prices.

Separately, the lack of additional strong fiscal stimulus might have two impacts: greater supply of munis and potentially higher taxes on the state and local level. These factors are pointing in different directions as far as Muni valuations go, so it's hard to tell which one would prevail. Arguably, because some of the additional Muni supply was pulled from the future to this year, leaving little current visible supply according to Bond Buyer, the additional supply should fill the future hole, so to speak, rather than overwhelm demand, creating a more supportive environment for Munis. 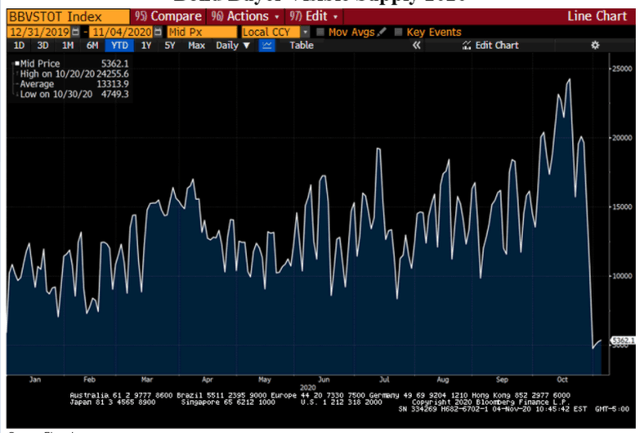 That said, there are risks of higher rates down the road. This is due to the economy that is bound to recover at some point even without additional fiscal support, assuming a sufficient number of the population is vaccinated through the end of 2021. And secondly, inflationary dynamics have not immediately dissipated. Deglobalization, a continuing supply shock and increased Treasury supply are still potential factors of higher inflation in the medium term.

As far as individual CEFs, a number of funds on our watchlist that span nearly the entire risk/reward spectrum and that were trading at attractive valuations have all seen sharp outperformance relative to the sector over the past week, leaving a bit less room for further outperformance.

A few attractive funds have lagged the rally so far and remain attractive:

Both funds have attractive distribution coverage and UNII metrics moving in the right direction.

The weakness of CEF discounts has been a persistent trend since the beginning of the recovery out of the March drawdown. This trend has gone in the face of many attractive features of the space, such as low leverage costs, reasonable underlying valuations and wide yield differential to risk-free rates. It is not exactly clear what is pushing discounts wider - whether it's tax-loss selling, post-election uncertainty or investor withdrawal from the space. However, in our view, the space remains fairly attractive in pockets, particularly as we expect risk-free rates to be better well-behaved in the likeliest electoral outcome than what the market expected coming into the election.

Disclosure: I am/we are long NMCO, NID. I wrote this article myself, and it expresses my own opinions. I am not receiving compensation for it (other than from Seeking Alpha). I have no business relationship with any company whose stock is mentioned in this article.