Riot Blockchain (NASDAQ:RIOT) operates mining hardware, which is a useful service to various blockchain networks, and in return receives cryptocurrency. It can either sell or hold that cryptocurrency. I've been taking another look at this company, as I've recently gained conviction Bitcoin and the ecosystem surrounding it could possibly go on a tear and set new highs.

If you're a Riot Blockchain shareholder, you're going to be disappointed by this note. I looked at the company again and I think I can find stuff I'd much rather own. After doing nothing for a long time, it is surging this year, but I don't really believe that's justified. Other crypto-related companies are surging too, and in some of those cases, I think you'd be better off long term. Short term who knows what happens.

I'm certainly not going to stand in front of this train and short it or anything.

At its current price, Riot Blockchain has a market cap of $171 million. That means it's trading at 4.6x book. Revenue is only $7 million. I realize the company is planning to further expand capacity through 2021 with 15.000 S9 Antminers. 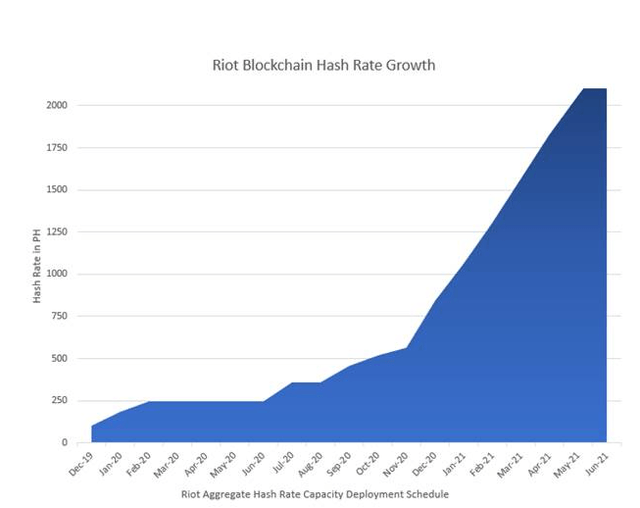 Gross margins are great on that revenue, but SG&A is really killing them. If Bitcoin keeps on surging, I think the company could do well, but that's true for many related investments.

This is an inefficient mining operation in the sense that it doesn't have the scale to really compete with the big ones. Because the company is losing money, it recently tapped the market for $14 million.

It has a big facility outstanding and can do so from time to time. I want a miner to be scaled up and profitable. I don't want to invest and then pay for it to get to scale. From Riot Blockchain's recent Q-10:

The company is hardly generating any revenue and is not exactly growing:

If Bitcoin rises, revenue will increase, and vice-versa. But that still doesn't really turn this into a healthy company. This is not a cloud business or a software business.

It is a hardware business and very dependent on scale and low costs. If the price of Bitcoin doesn't rise (which goes against my expectation), revenue will fall, and possibly rather quickly. S19 Antminers are on the market already (a newer, more efficient technology).

Hardware needs to be replaced every few years. There are not that many manufacturers, which means the company can charge relatively high prices. Prices of the machines seem to rise with Bitcoin prices as well (inflation also observable in unrelated industries like precious metals mining).

I'm not thrilled about the capital allocation choices I've seen. Riot Blockchain burned $600k on Logical Brokerage Corp. in 2018, which turned out to be a total donut.

An investment in a company called Tess didn't exactly pan out either. There could be some value left.

An investment in Coinsquare did not appreciate or depreciate. The site is still up, but I'm not sure it gained much traction.

Even though Bitmain charges high prices for its products, the company chooses to pay more from time to time:

Reports have been released which indicate that Bitmain adjusts the prices of its miners according to bitcoin prices, so the cost of new machines is unpredictable but could be extremely high. As a result, at times, we may obtain Bitmain miners and other hardware from third parties at premium prices, to the extent they are available. For example, in November 2017, in order to facilitate the launch of our mining operations without the potential delay associated with acquiring miners directly from Bitmain, we purchased Bitmain miners at substantially above Bitmain’s list prices.

The company discloses a lot of lawsuits against it in the 10-K:

On April 5, 2018, Michael Jackson filed a shareholder derivative complaint on behalf of the Company in the Supreme Court of the State of New York, County of Nassau, against certain of the Company's officers and directors, as well as against an investor (Jackson v. Riot Blockchain, Inc., et al., Case No. 604520/18). The complaint contains similar allegations to those contained in the shareholder class action complaints and seeks recovery for alleged breaches of fiduciary duty, unjust enrichment, waste of corporate assets, abuse of control and gross mismanagement.

On May 22, 2018, two additional shareholder derivative complaints were filed on behalf of the Company in the Eighth Judicial District Court of the State of Nevada in and for the County of Clark (Kish v. O'Rourke, et al., Case No. A-18-774890-B & Gaft v. O'Rourke, et al., Case No. A-18-774896-8). The two complaints make identical allegations, which are similar to the allegations contained in the shareholder class action complaints. The shareholder derivative plaintiffs also seek recovery for alleged breaches of fiduciary duty, unjust enrichment, waste of corporate assets, and aiding abetting a breach of fiduciary duty. The complaints seek unspecific monetary damages and corporate governance changes.

On September 24, 2018, the court entered an order consolidating the Gaft and Kish actions, which is now styled as In re Riot BlockChain, Inc. Shareholder Derivative Litigation, Case No. A-18-774890-B. The plaintiffs filed a consolidated complaint on March 15, 2019. The consolidated action has been temporarily stayed until the resolution of the motion(s) to dismiss in the securities class action pending in the United District Court for the District of New Jersey.

I'm generally not too thrilled to invest in companies that have lawsuits against them alleging fiduciary duty, unjust enrichment, or waste of corporate assets. Even less so, if they made investments that went to zero.

Riot Blockchain placed a lot of its machines in a facility run by Coinmint. One of its owners is suing to get the company dissolved. The website is supposed to be here, but it isn't up whenever I check.

Edit: the company contacted me and provided the correct website address which you can visit here. This renders my above point obsolete.

Bitcoin mining seems like a perfectly reasonable business to me. But it is also a commoditized business that requires economies of scale. Everyone can start up a mining operation - all you need is low-cost energy, a datacenter and computer equipment. True, there is optionality because of the exposure to Bitcoin price, but that can be much more efficiently found elsewhere.

So, what does that mean? The company can do great if it is run exceedingly well from here on out (seems unlikely given the track record) or if the operators get really lucky.

Bram de Haas writes the Special Situation Report. He looks at special situations like spin-offs, share repurchases, rights offerings and a lot of M&A events. Follow me on Twitter here or reach out through email at dehaas.bram@gmail.com.

Bram de Haas
17.01K Followers
Author of Special Situation Report
Professional risk-taker focused on smart bets and risk control.
15 years of investing and I feel like a rookie in his first year at the academy. My roots are in the value school but over time I've learned to respect different approaches. I'm interested in what quants do, options traders do, and even what WallStreetBets is doing (keep your friends close and...)