While many healthcare investors have focused on the Covid pandemic in 2020, other diseases, and new drug therapies for them, have not gone away. Agenus (NASDAQ:AGEN) has had a great story in 2020, focused on cancer therapies. The story is likely to get better in 2021, assuming an FDA approval for Agenus's first cancer therapy. That should be followed by a trove of data from its extensive pipeline. This article will start with a focus on a novel therapy platform, iNKT, which has already produced two potential therapies, one for Covid and the other for cancer. I will explain the importance of the MK-4830 milestone. Then I will recap the exciting highlights of the third-quarter Agenus analyst conference held last week, including updates on bali and zali. My conclusion is that despite some share price improvement in 2020, Agenus is way under the value it will have in 2021 when it most likely gets the first in a long line-up of commercial drug approvals from the FDA.

The immunotherapy field is rapidly evolving. In a way, it is one of the oldest forms of modern medicine since vaccinations date back to the 18th century. At the end of the 20th century, there were many therapies designed to tamp down an overactive immune system; the financial hit parade eventually being led by Humira, which was approved by the FDA in 2002. For cancer treatment, instead of minimizing the immune system, the secret was finding how to keep tumors from evading the immune response. The engineering of immune cells to attack cancers began with Provenge in 2010. The first approved cancer immunotherapy, or checkpoint inhibitor, was Yervoy, approved in 2014.

During this era, the enormous complexity of the immune system has been unraveled, though much is yet to be learned. The interactions of immune cells like T and B cells, molecular markers, antibodies, and cancer mutations have given biotechnology companies many new lines of attack. Agenus, though a small company, has assembled a team of immunology experts that has been able to move faster than the older, larger companies. In many cases, it has licensed its potential therapies to those companies, with an example being MK-4830, which will be discussed below.

Agenus's iNKT therapies are an example of a whole new sub-genre of immunotherapy where the company is taking the lead. The FDA recently gave Agenus permission to begin a first-in-human, Phase 1 trial of AGENT-797, an invariant natural killer T Cell, or iNKT therapy. 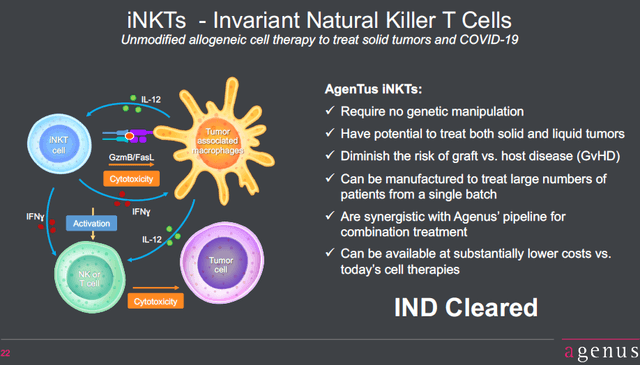 As shown in the above slide, iNKTs have some advantages over current cell therapies like CAR-T. Note the work so far has been preclinical. There is no guarantee that these therapies will work in human patients, or that the first versions will work. Nevertheless, for doctors, cancer patients, and investors, the potential of this technology is very exciting.

On November 2, 2020, Agenus announced it had dosed its first COVID-19 patient with AGENT-797. Agenus has set up a subsidiary, AgenTus Therapeutics, for this and other cell therapy products. Given the timelines involved, I am more interested in the potential iNKT cancer therapy, which has been cleared for a trial by the FDA but not yet dosed its first patient. But if the COVID therapy does work, it could have commercial value if the pandemic is ongoing. In any case, it would as serve as a model for future anti-viral iNKT therapies. That could include known hard-to-treat viruses like hepatitis B and C or perhaps even HIV.

At the heart of this program is an understanding of iNKTs, which are a subset of the better-known NKT, or natural killer T, cells. These are a sort of blend of the well-known T cells of the immune system and natural killer cells, which are part of the innate immune system (the one that is always present, fighting disease before the adaptive immune system reacts). NK cells are able to recognize and kill stressed infected or cancerous cells in the absence of MHC (major histocompatibility complex) markers or antibodies. Back to NKTs, they are T cells that express some molecular markers found on NK cells.

Finally, an iNKT cell is an NKT cell that expresses an invariant T-cell receptor chain. Think of them as the generals, or at least the colonels, of the immune response. They activate other types of immune system cells, including regular T cells, B cells, dendritic cells, and macrophages (see the slide above).

What does this amount to for investors? Possibly best-in-class immune system destruction of cancers at a considerably lower cost than CAR-T therapies. Also, hopefully, less side effects. While Agenus is basing going forward on preclinical data, keep in mind the caveats. The immune system is extremely complex, and cancers are extremely complex. It will likely be a couple of years before we have a grip on whether iNKT therapies will work well on patients. Meanwhile, even conducting these trials shows off the cutting-edge science being practiced at Agenus. Shorter run, as you can learn from this series of articles, Agenus has an astonishing array of immunotherapies in the clinic, or even approaching potential FDA approvals.

For those investors who are not immunology scientists and want to be able to decipher what is going on at Agenus and other immunotherapy companies, I can recommend reading Immunology, A Short Course by Richard Coico and Geoffrey Sunshine.

The expertise of Agenus has been vetted by several of the world's most successful pharmaceutical companies. Merck (MRK) recently started a Phase 2 trial of MK-4830, which is licensed from Agenus. That triggered a $10 million milestone payment to Agenus. MK-4830 is being studied in combination with Keytruda for patients with advanced non-small cell lung cancer. This followed positive results from Merck's Phase 1 study as reported in September. Adverse events were in line with those experienced from Keytruda alone. There was dose-related evidence of target engagement in patients with advanced solid tumors even though most patients had previously received three or more lines of therapy. An ORR (overall response rate) of 24% was shown in 34 patients.

In addition to the announced Phase 2 study, the Phase 1 study will continue with expansion cohorts of pancreatic adenocarcinoma, glioblastoma, head and neck squamous cell and gastric cancers. MK-4830 is an anti-ILT4 therapy. ILT4 is also known as LILRB2 or leukocyte immunoglobulin-like receptor. In immune cells, when it is expressed, it binds to MHC molecules on antigen-presenting (for instance cancer) cells, inhibiting immune responses. So the hope is that with MK-4830, this inhibition of immune responses will be quieted, allowing Keytruda and the immune system to kill cancer cells.

The Agenus Q3 2020 conference was held on October 29. Among the many updates, the most significant short term were about bali (balstilimab), zali (zalifrelimab), and AGEN1181. A rolling BLA for bali in ovarian cancer was filed with the FDA in Q3 2020. As a monotherapy, bali had response rates of 19% in PD-L1 positive tumors and 14% in PD-L1 positive and negative tumors combined. The Phase 2 combination trial with zalifrelimab has completed accrual, so BLA planning for the combination is underway. Response rates were 27% in PD-L1 positive tumors and 22% in PD-L1 positive and negative tumors combined. Median duration of response was 15.4 months for monotherapy; median duration of response in the combination trial had not yet been reached. While bali will be competing with several already-commercial PD1 agents, and zali will be competing with CTLA agents, individually and in combination, they look quite competitive. If approved, they give Agenus an advantage in combining with other immunotherapy agents, and other companies have shown an interest in using them in their combinations. Updated data for 1181 is being presented this week at SITC. Early indications are this CTLA agent is a considerable improvement on both zali and its competitors.

This week, several Agenus potential therapies reported updates at SITC (Society for Immunotherapy of Cancer). The following were scheduled:

Clearly, these are exciting times in the field of cancer immunotherapy, and for Agenus in particular. I will be analyzing the most intriguing of the data presented in future Seeking Alpha articles.

At the end of Q3, Agenus had a cash and equivalents balance of $114 million. Cash used in operations in Q3 was $32 million. Agenus carries no debt. The timing of milestone payments is hard to predict because they are event driven, but the Merck $10 million should come in Q4 2020 and a $25 million Shingrix royalty milestone is expected in 2021. It seems likely to me Agenus will need to raise more cash to get to where royalties and sales can cover expenses. This could be from a stock offering, which would dilute current investors. In the past, Agenus has preferred to raise cash by making licensing or collaboration deals. CEO Garo Armen said at the Q3 conference call that Agenus is in discussion with nine companies about such potential deals.

I believe Agenus has a remarkably small market capitalization given the potential of its pipeline. At the end of day, November 12, with Agenus closing at $3.77, it had a market capitalization of $768 million. The potential market for bali, zali, and AGEN1181 runs towards a billion per year, though that assumes after the initial approval Agenus is able to get label expansions. This article only was able to cover a few components of the Agenus pipeline. Agenus has assembled the scientific expertise to outrun most or perhaps all of the bigger pharmaceutical companies in the field of cancer immunotherapy. I suspect any one approval by the FDA of the therapies it has partnered with Incyte (INCY) or Gilead (GILD) would justify the current market capitalization. I am very surprised that one of the larger companies has not offered, say, $2 billion to snap up the company.

On the other hand, there are no guarantees that any particular therapy will be shown to be safe and effective. Bad news from any particular trial could send the stock price down in the short run. If approved, the bali ramp could be slow. On the whole, however, I see Agenus as the most exciting biotech opportunity available to investors today, given its pipeline and its current market capitalization.

Disclosure: I am/we are long AGEN, GILD. I wrote this article myself, and it expresses my own opinions. I am not receiving compensation for it (other than from Seeking Alpha). I have no business relationship with any company whose stock is mentioned in this article.