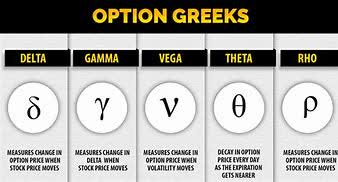 The number of individuals trading options has increased dramatically in the last two years. Option buying is reported to be very popular among users of Robinhood.com. Option analysts have developed several mathematical processes to measure the movement of an option price relative to the change in both time and the underlying stock price, plus volatility. Since they all have been assigned a letter in the Greek alphabet, they are referred to as the Greeks. Understanding what they represent and how they move is critical to any option strategy being employed successfully.

I will describe each Greek, then show how they interact as the stock price and volatility change. For those new to options, read this first: Options 101

Delta, Gamma, Vega, Theta, and Rho are the key option Greeks. However, there are many other option Greeks that can be derived from those mentioned above.

This table summarizes the Greeks that will be covered. 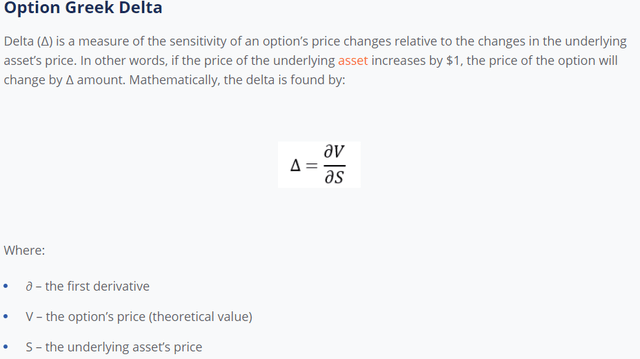 For those who haven't opened a calculus book since college, the first derivative is a measure of the rate change of the variable at any given point. This comes into play for several of the Greeks.

For Delta, values, expressed in decimals, vary from 0 to 1 for Call options, and -1 to 0 for Puts. Delta provides the probability the option will be ITM at expiration using the current volatility. It also provides the hedging ratio an investor would need to calculate the number of options required to offset their stock position.

Long options have a positive Gamma, with the value maximizing when the option is at-the-money (option strike price equals the price of the underlying asset). Gamma decreases as the option moves deep-in-the-money or out-the-money. Being the 2nd derivative, Gamma measure the rate of change in Delta as its changes with the stock price. 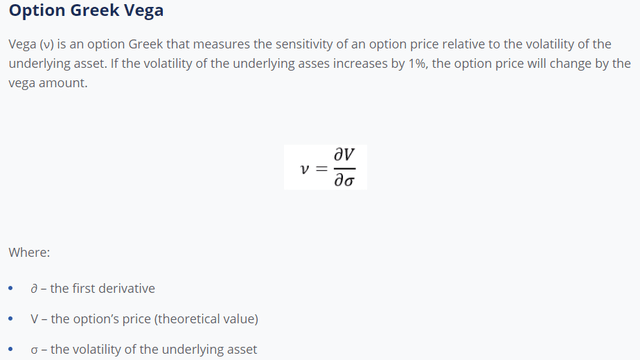 Vega is expressed in currency rather than in decimals. A change in Vega generally corresponds to a change in the option's value (both calls and puts) and would raise and fall with changes in the stock's volatility. 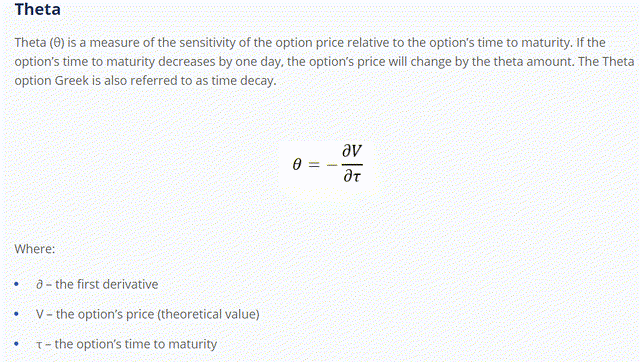 Theta is negative for options and is most negative when the option is at-the-money. The rate of change in Theta accelerates as the option approaches expiration. Everything else being equal, it measures the option's price loss for a day. 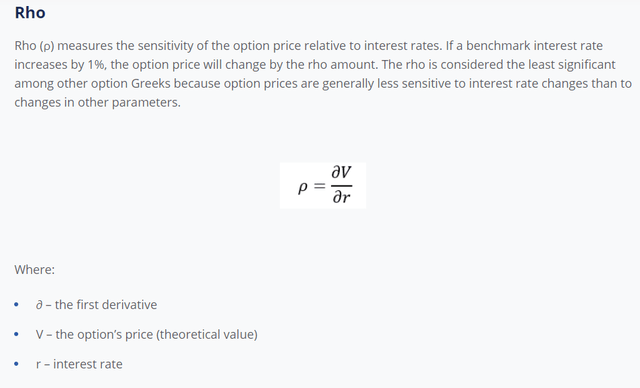 Generally, call options have a positive Rho, while the Rho for put options is negative. Fidelity allows traders to pick which Greeks to show; I have Rho hidden with its insignificance and interest rates being where they are.

The three I concern myself with are Delta, Theta, and Gamma. They help me determine how aggressively to bid based on what price movement I expect for the day. The upcoming examples will explain that in detail.

Volatility - not a Greek but critical to understand

There are two common types of volatility affecting option prices. Implied volatility is a concept specific to options and measures the degree to which underlying securities move in the future. This usually raises and falls with the market's trend. Historic volatility measures the speed at which underlying asset prices change over a given time period. Reversion to the mean theories say to sell options when the Implied volatility exceeds the Historical value as, all else being equal, the option is thought to be overpriced when that occurs.

While each stock's volatility is based on its price movement, they are influenced by the markets, which can be seen by charting VIX's movement. This year's high VIX readings has made option premiums very lucrative to option writers, bad for buyers.

The above two charts from Ivolatility.com show how the Greeks change with a 10% increase in volatility. Both premiums' price increase almost matched the 10% volatility change, with the Call moving slightly more than the Put. The Greeks barely moved. This shows the need for an accurate measurement of volatility if trying to trade an option with a wide bid/ask spread - splitting the difference is probably not the proper value.

All the following charts are from Ivolatility.com.

Holding all variables the same, the above two charts are eight days apart and show the effect of the passing of time on premiums. Theta says the premium should lose 9.83cents per day. Eight days later, the premiums were down 81cents. Theta will increase as time passes if other variables remain unchanged. Also notice the other Greeks were only slightly effected by time passing.

I have shares of WBA in two accounts. I failed to cover the first set as WBA dropped $4 after expiration. The next Friday, the 2nd set became uncovered. I prefer to have the calls expiring on different Fridays to even out the results caused by such price movement. This is what I saw as the market opened on November 2nd when I tried again to write new covered calls. 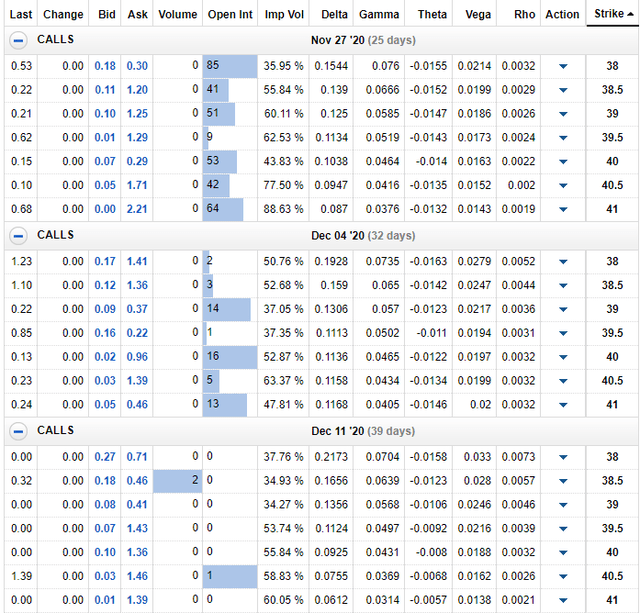 I like writing Calls 2-4 weeks out. Since these are not 3rd Friday expirations, the volumes are light and spreads a bit wide. I wanted to avoid the 11/20/20 expirations because WBA go ex-div on the 18th. The data does provide what I need for the topic - price effect.

What a writer can glean from this if they have a desired strike price and desired premium, how much would the stock have to gain quickly to achieve the desired trade? Based on Theta, the option price will lose half-a-cent each day the trade execution is delayed.

On Election Day, WBA bounced up $1.40 and I chose to cover 200 shares with a Nov 27th $40 CC and 300 shares with a Dec 11th $41 CC. For the last one I went out an extra week in case the rally continued post-election, netting an extra 33% on the premium pocketed. The recent highs have been near $40 so there is a chance I could get called and I am okay with that. Both strikes are high enough that being called before the 11/18/20 ex-date was minimal. One thing option writers learn to live with is unexpected news. WBA popped to $44 on the news drug chains could split $8.5b to dispense the vaccine. As I write this, the price has retreated to between my strikes.

The interplay between price and time was demonstrated that week as WBA closed higher Friday than either WBA price when I sold the Puts but three days later the options were selling for a third less. Some of the drop was due to volatility being down too.

Before trading options, be sure you have clearly defined goals in mind. With many option strategies available, investors can add income, downside protection, and/or leverage to one's portfolio. I will include links to those I have covered in other articles at the close of this one, but let's cover some of the most common uses of options, either as a writer or buyer.

Income: Option writers earn premiums for taking on the risk their options will be exercised against them. A conservative strategy is Covered Call writing where the investor gives someone the right to call away the writer's shares at a set price until a set date in the future. A second popular strategy is writing Put options whereby giving someone the right to sell you a stock at a set price up to a set date in the future. Since the price can tank, I consider this more risky then Covered Call writing but much less risky then the third income strategy, naked call writing. That strategy entails writing a Call option without owning the underlying stock. This has unlimited risk as there is, in theory, no limit to how high the stock price can go.

Protection: If an investor believes the market or individual stocks will drop, buying Put options will offset some of the loss if the price drop does occur. Choice #2 if you own the stock, is writing a Covered Call, maybe using a strike price ITM for extra protection. The Put risk is the drop doesn't happen and the buyer loses money on the option. The Call risk is the stock is called away with the writer missing some price appreciation.

Timing: If the investor owns a stock but wants to sell later for tax reasons, buying a Put could be done to protect against a drop. Or if they like a stock but funds aren't available until later, they could buy a Call option that expires after the date the funds become available.

After understanding what options can do for you as an investor, be sure you also truly understand the minefield some strategies present. There are several SA Contributors who write on various option topics. You can locate most by searching on the word "option".

I have covered several option strategies in depth:

This link provides another educational look at the Greeks: Option Greeks

If you appreciate articles of this nature, please mark it 'liked' and click the 'Follow' button above to be notified of my next submission. Thanks for reading.

I have both a BS and MBA in Finance. I have been individual investor since the early 1980s and have a seven-figure portfolio.  I was a data analyst for a pension manager for thirty years until I retired July of 2019. My initial articles related to my experience in prepping for and being in retirement. Now I will comment on our holdings in our various accounts. Most holdings are in CEFs, ETFs, some BDCs and a few REITs. I write Put options for income generation. Contributing author for Hoya Capital Income Builder.

Disclosure: I am/we are long WBA. I wrote this article myself, and it expresses my own opinions. I am not receiving compensation for it (other than from Seeking Alpha). I have no business relationship with any company whose stock is mentioned in this article.

Additional disclosure: I am short both the Nov 27th and Dec 11th Call options on WBA.