Western Asset Municipal Partners Fund Inc. (NYSE:MNP) is a closed-end fund that has been providing investors monthly income for years. The discount is currently larger than its historical average. This is at a time when many other municipal funds are trading higher than their average due to investors seeking safety during 2020's volatility. One reason for this is that Legg Mason, the parent company of Western Asset, was merged with Franklin Templeton (BEN). This appears to have made investors a bit uncertain of the funds that go along with this merger. I believe this results in an opportunity that investors can take advantage of.

Municipal bonds are great for investors seeking tax-exempt income; this generally means higher income earners are most benefited. That isn't always the case, though, as they can provide attractive income from an investment that is quite safe. Relatively speaking, municipal bonds haven't experienced large amounts of defaults. This involves all sorts of economic downturns and hardships. This is partially why there has been strength from these assets this year. Volatility has spiked up and this has left investors looking for sustainable and safe income.

Buying into a CEF like MNP can also serve as a great way to diversify many muni bonds together while at the same time allowing for the professional management of the portfolio of assets. The fund's investment objective is to "seek high current income exempt from regular federal income tax, with capital appreciation as a secondary objective." They boast an "emphasis on team management and extensive credit research expertise to identify attractively priced securities."

The fund is smaller at about $242 million in assets. Of these assets, approximately 34.74% is from a preferred share offering. This does create a more expensive form of leverage. Though they are auction rate and variable rate preferred shares. This should reduce the expenses of their dividends, and it has as the variable-rate averaged just 1.4% when they last reported, a slight reduction from last year's 1.495% rate.

It isn't out of the ordinary for muni funds to utilize more exotic forms of leverage. They also generally have higher amounts of leverage as the underlying portfolio is typically seen as more defensive and stable. The fund's expense ratio is 2.11%, including the preferred dividends being paid. Excluding this, we have an expense ratio of 1.05%.

Muni funds aren't necessarily the most popular funds as far as those seeking strong capital appreciation and total returns. The upside from that is the fact that they are safer than other bond investments - second only to U.S. treasuries in safety. For that, we give up market-beating equity-like returns.

With that realistic expectation, we see the MNP has been able to provide acceptable returns. What we should expect is that MNB can outperform an appropriate benchmark. This can be something like the passive iShares National Muni Bond Fund ETF (MUB). Going back to when that ETF was launched, we see that MNP has been able to exceed those returns by a healthy clip.

Of course, this is due to the utilization of leverage, which makes the fund more volatile. We can see this below, as well as thhat peak to troughs are more exaggerated than the ETF counterpart. 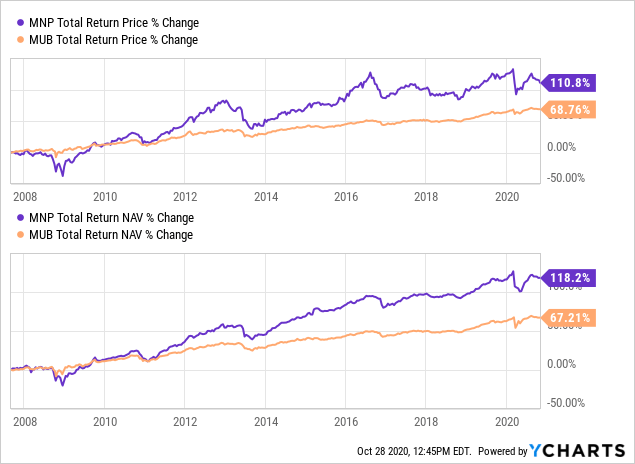 So while the fund can boast a diversified portfolio of safe muni bonds, it can't boast as being safer than a non-leveraged ETF benchmark. That wouldn't be realistic anyway. 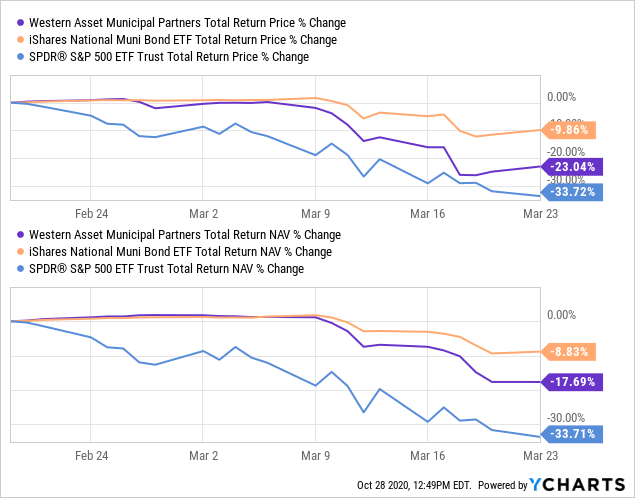 For a glimpse to see just how much more volatile, we can take a look from the period of February 19th, 2020 to March 23rd, 2020. This was the last bull market that we experienced. To provide greater context, I included the S&P 500 ETF (SPY). As we can see, the fund held up significantly better than the pure equity counterpart, but less so against the muni ETF.

We also get to see from above that even the ETF experienced a discount during March's collapse. However, MNP was more impacted by this due to not having the redemption and creation ETF mechanism that typically holds share prices close to NAV prices.

MNP is also experiencing a wider discount than its historical average due to uncertainty from investors on the Legg Mason merger with BEN.

The 5-year average discount is 8.13%, while the 1-year average is a bit wider at 11%. In both cases, the current discount is wider than that. This can create an opportunity for income investors to seize.

However, two things were working against MNP (and the rest of the muni market.) The biggest impact was likely coming from bonds being called and issuer lowering paying ones. Typically, muni bonds have a noncallable period for 10 years after issuance. That puts 2016-2019 being around 10 years after the GFC. At that time, the Fed slashed rates to 0% - a bit like today's 0% target. Before this, bonds were being issued with higher interest rates as rates were higher before the collapse of the economy in 2008/09.

An additional factor impacting MNP would be that rates were also rising (but still lower than they were pre-GFC.) That meant that the variable rate preferred that they issued was rising in cost for them to carry.

Both of these factors I believe explain exactly why we have seen declining monthly dividends. Now that interest rates are back to 0%, and most pre-GFC bonds are called back - NII can likely stay more predictable.

Over the last 6-months, their distribution coverage was 101%. That was from the prior coverage of 92%. For fixed-income funds, we want to ideally see this at greater than 100% at all times. 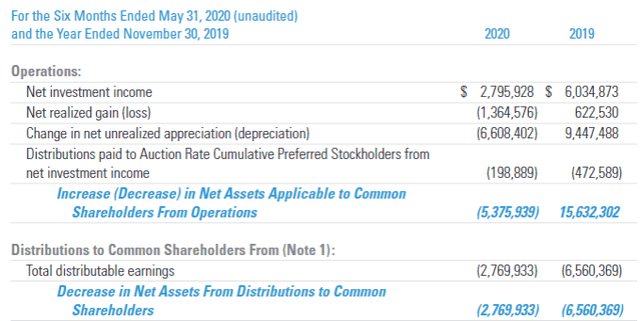 Indicating the strength of muni bonds is their typically high credit rating. For MNP, they boast almost all of their positions being classified as investment-grade. This can be beneficial for investors wanting the highest safety from their position. As a reminder, leverage can still wreak havoc during times of uncertainty. 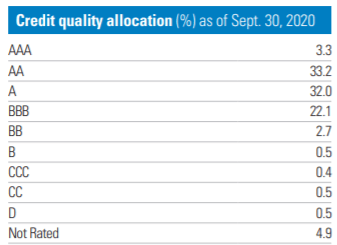 An additional factor of the fund's portfolio is that they invest in a broad spectrum of sectors. Transportation and industrial revenue being the highest allocations. This can provide a greater buffer for investors if there is one sector that is being hit particularly hard for a unique reason. 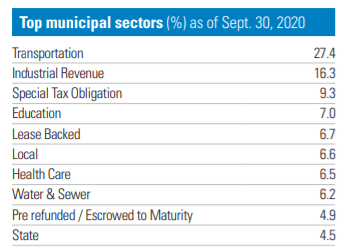 Industrial revenue muni bonds are those issued by municipalities that benefit a private company. Since it is tied to one specific project typically, this can add a bit more risk to the outcome. Should that project fail, the bond would likely default. It is also possible that the private company could declare bankruptcy if the failure is too great. MNP holds 255 positions though, that helps mitigate risks through diversification.

We highlighted above the risks that can come from bonds being called. The risks are minimal on this front. This is because bonds being callable now aren't necessarily going to save any interest costs. The bonds issued today will have been issued in the same 0% rate environment it was 10 years ago.

That being said, MNP doesn't have a particularly large number of bonds eligible for being called until at least 2022. At that time, 11% of the portfolio is.

Another important factor for fixed-income funds, in general, is the effective duration. For muni funds, they typically have high effective durations. This is because municipalities issue long-dated debt typically. The longer you can issue debt, the lower the payment, the more debt one can accumulate.

California, Illinois and New York are amongst the largest state allocations, as reported in their last Semi-Annual Report. California is 21.7% of the bonds issued. Illinois is 16.8% and New York's allocation is 15.2%. This can be important as the higher allocations to your state likely means you will get state taxes exempt for that portion of the payment as well. A benefit with MNP, being a national muni fund, is that you get greater diversification across states too, meaning that one state can't drag down the whole fund.

The world is still dealing with the coronavirus pandemic. The large drops recently in the market are evidence that things could be getting worse. At least, that the sentiment from market participants is worse. Investing in areas of the market that can remain relatively sheltered from the pandemonium can do an investor well if they are uncertain heading through the winter.

Overall, MNP looks like a great fund to offer investors that peace of mind. The fund has had a long history of paying monthly dividends. Those are dividends that were paid no matter the economic environment and how dire things appeared. This is why muni bonds and funds can hold up well over time due to historical safety. Though during times of peak despair, as we saw in March, they can get hit temporarily.

Nick Ackerman
11.41K Followers
Author of CEF/ETF Income Laboratory
CEF/ETF income and arbitrage strategies, 8%+ portfolio yields
Nick Ackerman is an avid student of the markets and has been investing in his own accounts for over 14 years. He is a former Financial Advisor and has previously qualified for holding Series 7 and Series 66 licenses. These licenses also specifically qualified him for the role of Registered Investment Adviser (RIA), i.e., he was registered as a fiduciary and could manage assets for a fee and give advice. Since then he has continued with his passion for investing through writing for Seeking Alpha, providing his knowledge, opinions, and insights of the investing world. His specific focus is on closed-end funds as an attractive way to achieve income as well as general financial planning strategies towards achieving one’s long term financial goals.

Additional disclosure: This article was originally published to members of the CEF/ETF Income Laboratory on October 28th, 2020.