This article is part of a series that provides an ongoing analysis of the changes made to Berkshire Hathaway’s 13F stock portfolio on a quarterly basis. It is based on Warren Buffett’s regulatory 13F Form filed on 11/16/2020. Please visit our Tracking 10 Years Of Berkshire Hathaway's Investment Portfolio article series for an idea on how his holdings have progressed over the years and our previous update for the moves in Q2 2020.

During Q1 2020, Berkshire Hathaway’s (NYSE:BRK.A, NYSE:BRK.B) 13F stock portfolio value increased ~13%, from ~$202B to ~$229B. The top five positions account for more than three-quarters of the portfolio: Apple Inc. (AAPL), Bank of America (BAC), Coca-Cola (KO), American Express (AXP), and Kraft Heinz (KHC). There are 46 individual stock positions, many of which are minutely small compared to the overall size of the portfolio.

Warren Buffett’s writings (pdfs) are a treasure trove of information and are a very good source for anyone starting out on individual investing.

Note 2: It was reported in August that Berkshire had invested 5% passive stake each in 5 Japanese trading companies.

Costco Wholesale (COST): COST was a long-term position that was in the portfolio for almost two decades. This quarter saw the 0.65% of the portfolio stake disposed at prices between ~$303 and ~$359. The stock currently trades at ~$380. Berkshire had a ~10x return on the position over the holding period.

Liberty LiLAC Group (LILA, LILAK): The minutely small 0.01% of the portfolio stake in LILAK saw a minor increase during the quarter.

Note: Apple stock split 4-for-1 in August. The prices quoted above are adjusted. Berkshire has a ~5.8% ownership stake in the business.

M&T Bank (MTB): The very small 0.12% of the portfolio MTB stake was reduced this quarter.

American Express and Coca-Cola: These two very large stakes were kept steady during the last ~6 years. Buffett has said these positions will be held “permanently”. Berkshire’s cost basis on AXP and KO are at around $8.49 and $3.25 respectively, and the ownership stakes are at ~18% and ~9.5% respectively.

Kraft Heinz Co.: KHC is currently a fairly large position at 4.26% of the portfolio. Kraft Heinz started trading in July 2015, with Berkshire owning just over 325M shares (~27% of the business). The stake came about because of two transactions with 3G Capital as partner: a ~$4B net investment in 2013 for half of Heinz and a ~$5B investment for the acquisition of Kraft Foods Group in early 2015. Berkshire’s cost basis on KHC is ~$30 per share, compared to the current price of $32.15.

Note: Berkshire has an ~11% ownership stake in StoneCo. In October 2018, WSJ reported that Berkshire had invested ~$300M each in two fintechs: India’s Paytm and Brazil’s StoneCo. The Paytm investment was made in August 2018, while the STNE purchase was following its IPO in October 2018.

Note: Synchrony is the private-label credit card business split-off from GE that started trading in August 2014 at ~$23 per share.

Note 1: Since November 2015, Warren Buffett is known to own ~8% of Seritage Growth Properties (SRG) at a cost basis of $36.50 in his personal portfolio. It currently trades at ~$16. SRG is a REIT spin-off from Sears that started trading in July 2015.

The spreadsheet below highlights changes to Berkshire Hathaway’s 13F stock holdings in Q3 2020: 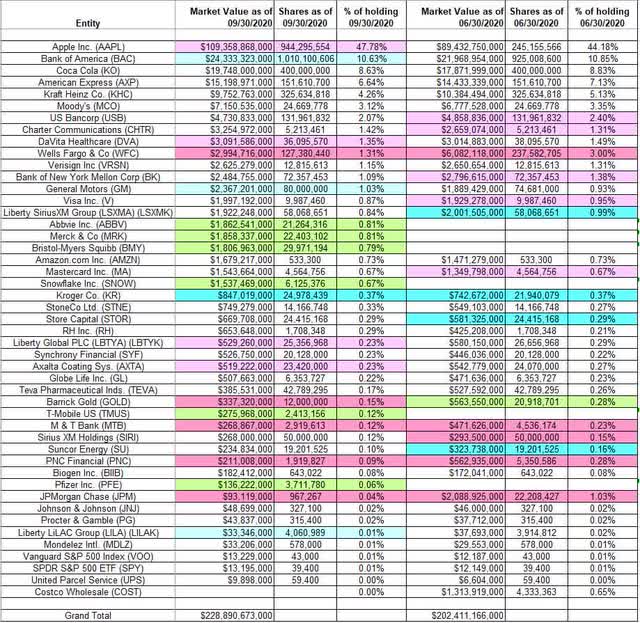 John Vincent
22.46K Followers
Focused on cloning strategies by analyzing 13F reports of a curated set of around fifty super-investors and generating Absolute Returns thru exploiting inefficiency, volatility, and momentum.

Disclosure: I am/we are long ABBV, AMZN, KHC, WFC, BRK.B. I wrote this article myself, and it expresses my own opinions. I am not receiving compensation for it (other than from Seeking Alpha). I have no business relationship with any company whose stock is mentioned in this article.