The US presidential elections are now over, and we need to prepare for a new administration and some new policies. The incoming president, Joe Biden has already stated that the US will rejoin the Paris Accord and join the fight against global warming. The new administration is also trumpeting a new: “Green Deal” which suggests that future of oil, coal and gas is now bleak. On the upside is that the future of electric cars, solar panels and wind farms now looks a lot brighter. Whether or not this change in direction is right or wrong is not for me to say; however, as I am heavily invested in the silver space, I do need to sit up and take note.

Today we will take a quick look at what these political changes mean for the silver industry and how best to position ourselves going forward.

There is a myriad of uses for silver so we will confine ourselves to looking at two of the obvious uses where we think there will be considerable movement in terms of increased demand, and they are autos and solar panels.

Starting with electric cars, we are all no doubt aware that the political pressure on the auto industry has been instrumental in bringing about the phasing out of the combustion engine in favor of the electric engine. Last year auto production was close to 100 million cars, of which around 2 million were powered by electric motors. For the auto industry to manufacture 100% of their vehicles based on the electric format will necessitate a huge increase in demand for precious metals such as silver. The current annual usage in motor vehicles is in excess 36 million ounces of silver according to The Silver Institute. Future demand is 50 times greater than today, which gives us a figure of 1,800 million ounces.

Solar panels are also a heavy user of silver with around 20g (0.643 troy ounces) required per panel, which equates to around 6.1% of the total cost of the price of building each unit. As the drive to comply with new renewable energy laws increases, the demand will also rise in dramatic fashion. The threat to this growth will be the increased cost of silver, which in turn will prompt manufacturers to use less of it by way of the emerging wafer-thin technological advances, a process that requires less silver but achieves the same objective. These efficiencies will be limited if and when they start to impact on the output of the panel, so it remains a threat, but a limited one.

The effect of the coronavirus has been positive for the home entertainment industry due to the amount of time that people spend at home in a lockdown situation. The companies in this field have experienced a dramatic increase in subscriptions and turnover. Netflix (NFLX) is one such enterprise which has seen its stock price move from around $329.00 to $484.00 today. This change in social behavior has driven the demand for more and larger screens and silver is required to make these screens.

Opposition to The Green Policies of The New Administration

The implementation of these policies is not a certainty as the Democrats may not gain control of the Senate and if they do not, then they could encounter opposition to such policy changes. However, I think that the Republicans would object more to proposed changes to taxation than they would to the pursuit of a greener future for Americans; however, such opposition cannot be ignored.

The YTD Chart for Silver

This chart below shows silver's rise from the $18.00/Oz a year ago to around $25.00/oz today. The important thing to note is that despite the wild oscillations silver is making steady progress as industrial demand increases due to governmental policy changes driven by the need for increased environmental protection.

Following the COVID-19 dip in March, silver has made steady progress throughout 2020. The technical indicators have unwound from an overbought state and now have room to move higher. 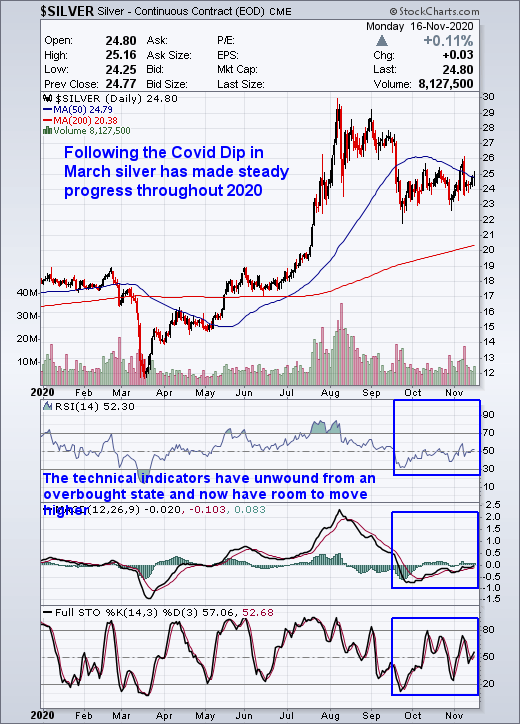 The newly elected President of the United States is firmly in favour of a Green future which bodes well for silver given the increased industrial demand that this policy will bring.

The increase in demand from the auto and solar industries will squeeze supply to the point where silver prices will spike to higher levels before technological advances can reduce the reliance on silver.

The pressure on prices is compounded by the demand for silver via a myriad of other developments such as silver's medical uses.

On top of this we have investment demand as poor man’s gold is an increasingly sought-after precious metal, as seen through the growth of the EFTs such as the iShares Silver Trust (SLV) which now has a market capitalization of $14 Bln.

Given that the above looks like the perfect storm for silver, we remain Bullish on silver and expect the price to reflect the additional pressure by the dive for a green future.

My subscribers and I are long physical silver and silver producers and we are now seeking to increase our exposure to the producers as we reposition our portfolio for what looks like a rapid short to medium term advance in silver prices.

The silver space is becoming the place to be in my opinion; however, the readers' comments are very much appreciated so please fire them in whether you agree with us or not, and I will do my best to respond to each and every one of them.

To stay in touch, please hit the "Follow" button at the top of the page.

Bob Kirtley
2.7K Followers
Bob Kirtley has traded options and stocks since 1980. Bob Kirtley spent many years working on Oil projects including some in Alberta, such as the tar sands installations in Fort McMurray. He lived and worked in many different countries, as that is the nature of the construction business. Planning and cost control are key to a projects success and he tries to apply those disciplines on a daily basis when dealing with investments. His training in such areas as SWOT and Risk analysis can be applied from time to time. His qualifications include being chartered in the United Kingdom, which is similar to that of a Professional Engineer in Canada, along with a Masters Degree in Project Management from South Bank University, London, England. He has been working for a number of years on a full time basis representing a group of investors in England.
Follow

Additional disclosure: gold-prices.biz makes no guarantee or warranty on the accuracy or completeness of the data provided. Nothing contained herein is intended or shall be deemed to be investment advice, implied or otherwise. This letter represents our views and replicates trades that we are making but nothing more than that. Always consult your registered adviser to assist you with your investments. We accept no liability for any loss arising from the use of the data contained on this letter. Options contain a high level of risk that may result in the loss of part or all invested capital and therefore are suitable for experienced and professional investors and traders only. Past performance is neither a guide nor guarantee of future success.

43 Comments
To ensure this doesn’t happen in the future, please enable Javascript and cookies in your browser.
Is this happening to you frequently? Please report it on our feedback forum.
If you have an ad-blocker enabled you may be blocked from proceeding. Please disable your ad-blocker and refresh.