This is the type of energy deals that make sense and unlike the PXD/PE transaction. The two weaknesses of both companies are resolved with this merger.

CVE had a WCS-WTI uncertainty weakness. Husky had a high opex/boe and not enough production problems.

By merging these two entities, CVE has effectively created a 2nd Suncor with a similar production profile and higher refining capacity but trading at a 43% discount.

For us, we have sold 70% of our Suncor position and doubled down on CVE at $3.41 USD. We will also be watching for the closure of this merger for those warrants. We think if you are bullish on oil prices and energy stocks, in general, going forward, this is a must-own.

Note: The article was first released to HFI Research subscribers on Oct 25th. All the figures have been changed to match the price moves.

Cenovus Energy (NYSE:CVE) announced the takeover of Husky Energy (OTCPK:HUSKF) at a ~21% premium almost 4-weeks ago. Shareholders of Husky will be given a warrant to purchase more CVE shares with a duration of 5-years and at a strike price of C$6.45. 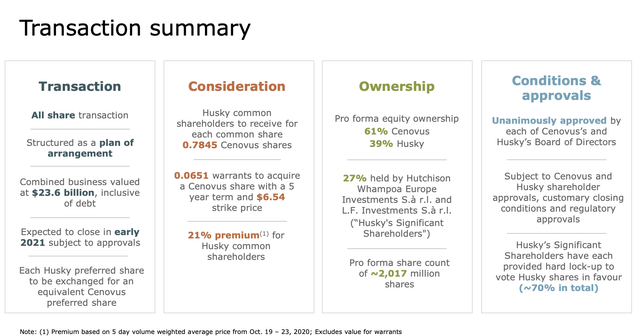 This deal makes sense on every front. From valuation, business combination, synergies, you name it.

Prior to this proposal, CVE's biggest issue and stigma towards the stock was that it was going to be weighed down by the WCS-WTI spread uncertainty. The market saw CVE as just a more leveraged oil producer rather than an integrated giant. This is important to understand because CVE was chronically undervalued versus the likes of Suncor (NYSE:SU) on this WCS-WTI front alone.

What's sort of crazy just from this valuation standpoint is that CVE's business is now practically identical to Suncor's. 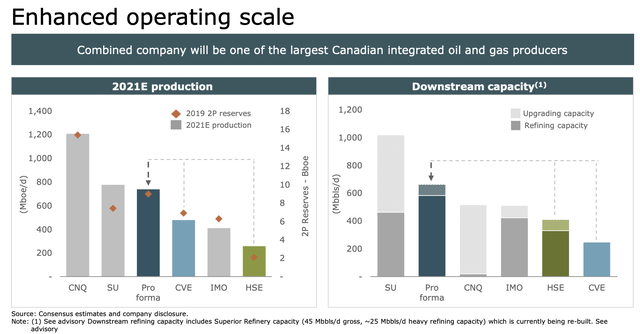 Now there are some caveats to keep in mind when making this all-important comparison. Husky didn't generate FCF in 2019. Why? Because Husky is ~70% owned by Li Ka-shing's Hong Kong entity, and they are long-term focused, so they plowed all of that back into production. What's the downside then? Husky's cost structure, because of the expansion, made its opex/boe averaging ~C$15 per barrel versus CVE's C$9 per barrel.

You talk to any E&P team and if you are expanding production base by heavily investing, yet you still have a "bloated cost structure", you are doing something wrong. CVE will likely take this entity, cut the fats, and streamline it. This is why CVE is being so aggressive with its C$1.2 billion cost synergy target because truthfully, we are also seeing a lot of fat in Husky. 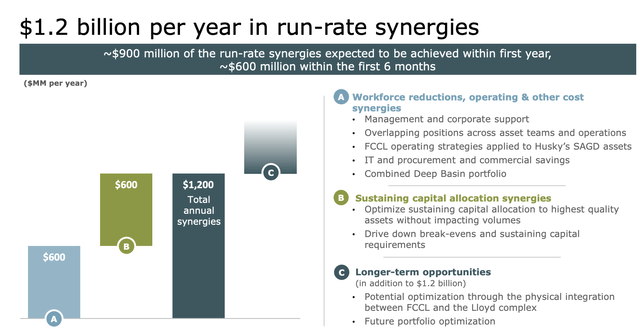 On the call, CVE's team was quick to point out that the integration of CVE's upstream into Husky's downstream was NOT in the synergy forecast. This, in our view, was one of the biggest reasons why CVE would even look at Husky as a takeover target. 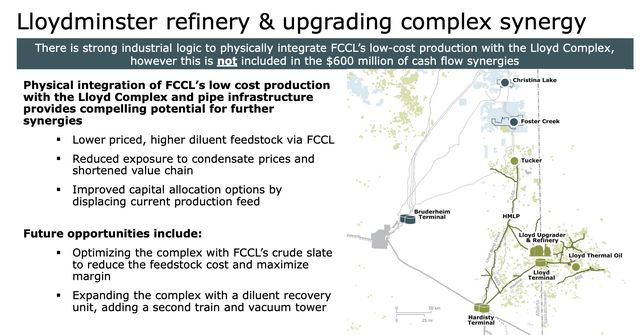 Now for those of you that are unaware of how Husky is running this refinery, here's a bit of background. Husky's production is not all heavy oil, and because its refining capacity is HIGHER than its production base, Husky has to buy from other producers.

In order to run its refineries efficiently, Husky blended more costly crude with the heavier crude slate to get the products it desired. This lowered its margin and unlike Suncor which can upgrade all of its heavy oil before it goes into the refinery, Husky couldn't.

So there was a competitive disadvantage from this angle on Husky's side, and it was always very vulnerable to margin swings. In addition, anytime WCS-WTI spreads tightened, Husky actually got hurt because while the upstream benefited, its margins got compressed.

CVE provides quite a big improvement to Husky's business by now supplying it with low-cost heavy crude. So instead of now having to source it from others, you can see how just from this factor alone, the combined entity will realize big synergies.

Going forward, one of the most obvious synergies out of this is for CVE to sell the higher realized pricing crude on the market versus being used to blend into the refinery, and supplying the refinery with heavy crude. An analyst asked on the call whether this will require a lot of capex upfront, and the team said no.

We think this synergy will be one of the most underappreciated because the market won't see it until CVE reports earnings, but we think it's the key reason why this merger made sense from the start.

Here's a snapshot of where we stand today:

The company has guided where FCF will be at each given WTI pricing environment. 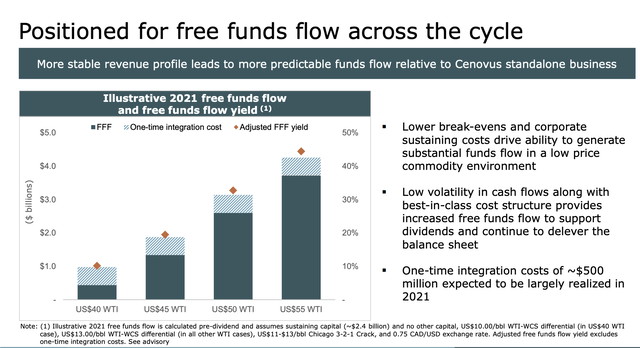 If you run the combined entity on a discounted free cash flow basis, you get a value of C$14.14 per share at $50/bbl WTI.

And like we said earlier, just on a pro-forma basis today compared to the likes of Suncor, it's currently ~43% undervalued.

In theory, we should see the market react very favorably to this merger, and since the merger announcement combined with a bit of luck on the vaccine timing and energy rotation, CVE stock is already up 25%.

But if the stigma towards CVE's vulnerability to WCS-WTI was true, then this merger basically eliminates that risk. 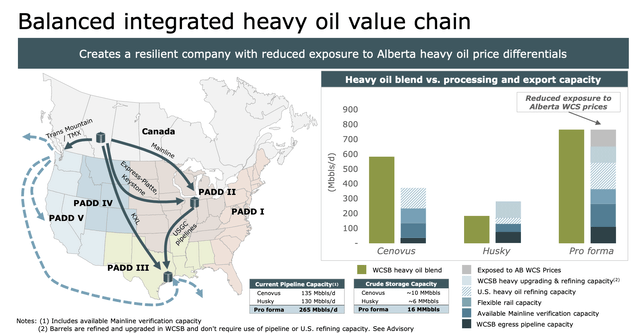 This is the type of energy deals that make sense and unlike the PXD/PE transaction. The two weaknesses of both companies are resolved with this merger:

By merging these two entities, CVE has effectively created a 2nd Suncor with a similar production profile and higher refining capacity but trading at a 43% discount.

For us, we have sold 70% of our Suncor position and doubled down on CVE at $3.41 USD. We will also be watching for the closure of this merger for those warrants. We think if you are bullish on oil prices and energy stocks, in general, going forward, this is a must-own.

For energy investors, the 2014-2020 bear market has been incredibly brutal. But as the old adage goes, "Low commodity prices cure low commodity prices." Our deep understanding of US shale and other oil market fundamentals leads us to believe that we are finally entering a multi-year bull market. Investors should take advantage of the incoming trend and be positioned in real assets like precious metals and energy stocks. If you are interested, we can help! We are now offering a 2-week free trial, so come and see for yourself!

Disclosure: I am/we are long CVE, SU. I wrote this article myself, and it expresses my own opinions. I am not receiving compensation for it (other than from Seeking Alpha). I have no business relationship with any company whose stock is mentioned in this article.

Follow HFIR and get email alerts
+
Add a comment
Disagree with this article? Submit your own.
To report a factual error in this article, click here.
Your feedback matters to us!