Over the past few months, shares of the iShares MSCI Global Silver and Metals Miners ETF (BATS:SLVP) have taken a hit in line with a drop in silver prices. 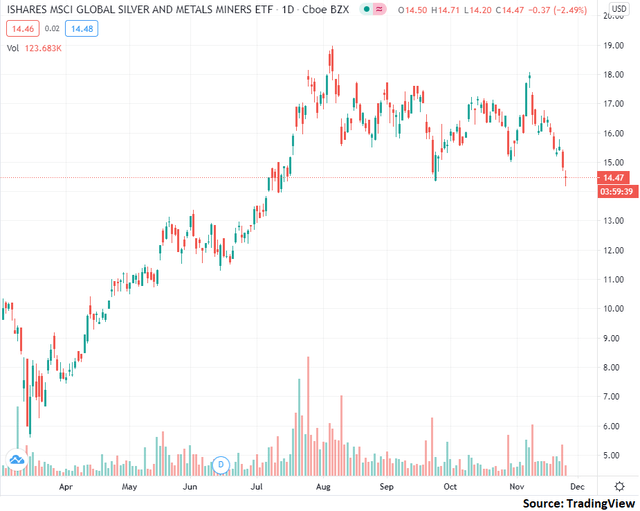 While some investors may consider taking profits at these levels and moving on from SLVP, I believe this is the wrong move. Specifically, I believe that silver miners are going to shine over the next year and that a purchase now is a solid move.

Within the silver miner ETP space, SLVP is one of the lesser followed ETFs with most of the market share going to the popular Global X competitor SIL. However, despite the AUM difference, I believe that the market is overlooking a viable investment option in SLVP as we'll discuss in this section.

The iShares MSCI Global Silver and Metals Miners ETF is an ETP which is following the MSCI ACWI Select Silver Miners Investable Market Index. This index is provided by the popular and well-known provider MSCI and gives a fairly broad exposure to global producers of silver. It specifically targets companies which are highly dependent on silver prices for earnings and includes securities across the market capitalization spectrum.

Frankly, SLVP is what you would expect from a silver miner focused ETF - it gives broad exposure to firms on a market-cap basis, and it does so with a fairly cheap expense ratio. For example, SLVP currently has a 0.39% expense ratio, while its more popular competitor SIL's expense ratio is 0.66%.

All this said, however, the key question for investors is the degree to which changes in silver are reflected through into the earnings of companies held in the fund and, therefore, the broad changes in the fund itself. In the following chart, I attempt to answer this question. 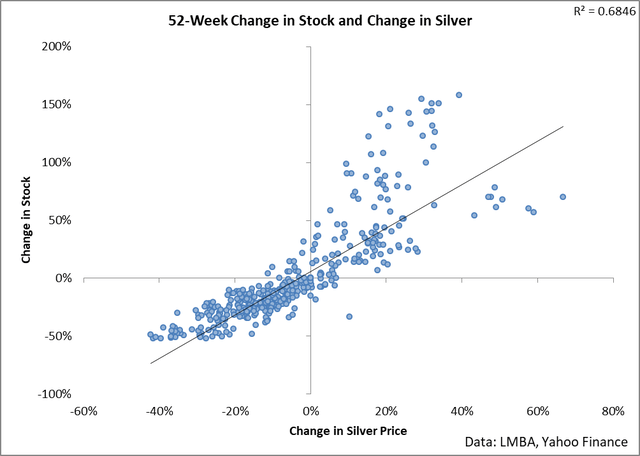 The above data is very interesting to me in that it shows a clear relationship - silver and the shares of SLVP tend to move in lockstep except when prices are moving to the upside. For example, if you look at the data when silver has moved anywhere from 10% to 40% in a given year, you'll notice a very clear trend of higher and stronger performance in SLVP than the actual returns in silver. Seen from another perspective, here are the averages of the above chart bucketed every 10%. 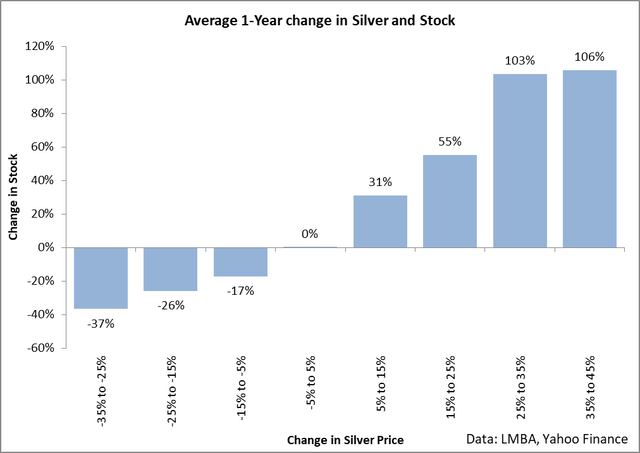 I find the above data fairly surprising in that, throughout my studies of metal miners and their correlations to changes in the price of the raw commodities, SLVP is actually one of the most responsive to price rises of the alternatives. What this tells me is that historically speaking at least, SLVP tends to be a very strong option for playing a rally in silver. If you are not interested in holding the commodity, then holding SLVP will likely deliver a stronger return in most price appreciation environments - assuming, of course, that the past correlations carry forward into the future (which, in my opinion, is a fair assumption).

All this said, let's turn our attention to the silver market fundamentals to attempt to assess where prices are likely headed.

As most traders are aware, the silver markets are in the midst of a moderate decline over the past few weeks with prices erasing some of the gains seen earlier this year. 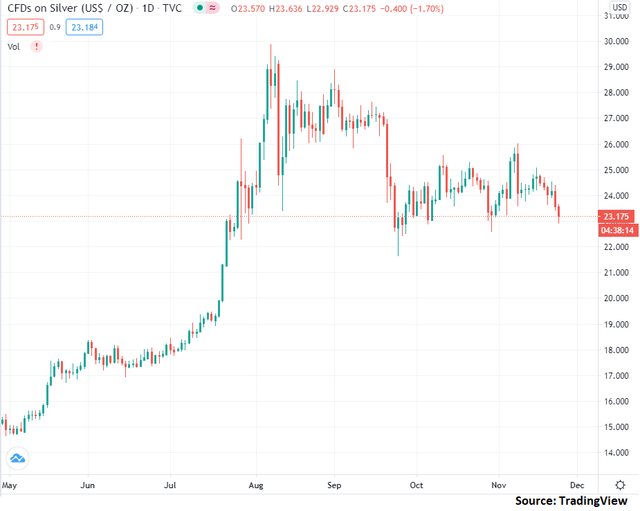 In my opinion, this pullback in price represents a strong buying opportunity - silver prices are falling, and the underlying fundamental thesis for silver remains strong.

One of the major fundamental themes I monitor in the silver markets is momentum: past strength tends to beget future strength. 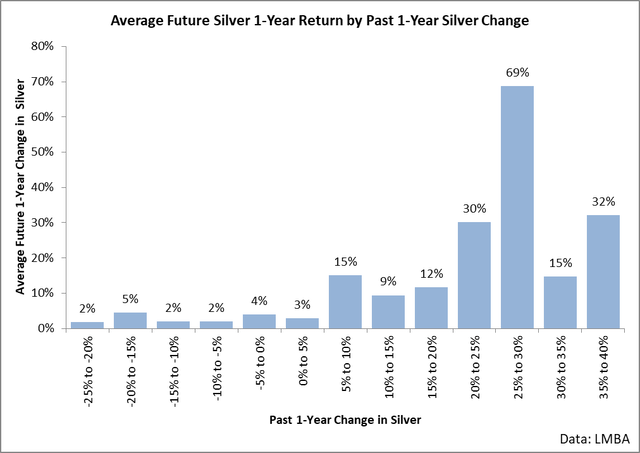 What this chart shows is that, when silver prices have been increasing in any given year, future increases in price tend to be directly correlated to the magnitude of prior gains. In other words, the past actually does tend to correlate with future changes.

The key fundamental theme behind this chart is that it captures the tendency of silver holders to park capital into silver after it has been performing strongly as an asset. What I mean by this is that, in general, the data supports a hypothesis that silver investors tend to mainly consider investing in silver after it has been performing strongly. This leads to prices increasing in a somewhat virtuous cycle as higher prices beget further investment and, therefore, additional higher prices (until the trend ends, of course).

Over the past year, silver has risen by a little over 35%. Historically speaking, when silver has rallied by this amount over a year, the odds tend to support further upside. For example, on average, when we see silver rally by around this much in a given year, the next year averages a return of 32%.

When I discuss average returns, I try to qualify the data by pointing out that an average is simply a summary of a broad dataset - there are data points above and beneath this figure, and the figure can be skewed. In the following chart, I have graphed the spread of the data to help view what typical rallies and declines have averaged. 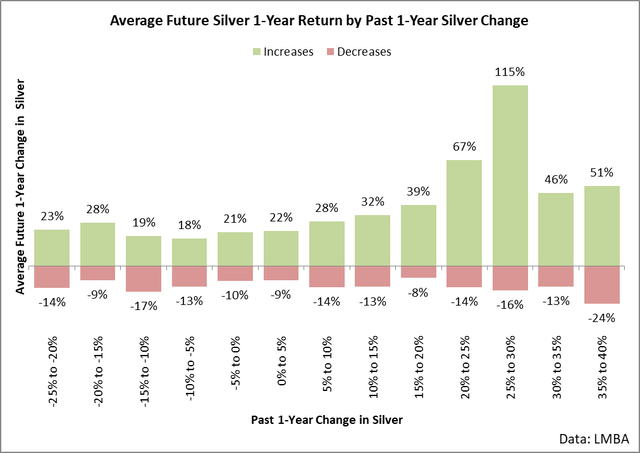 Put simply, it has historically made for a very good trade to buy silver after we have seen price rallies in the vicinity of what we're currently seeing. Probabilistically speaking, silver has increased in 75% of all years following similar rallies with average increase of 51% and average declines of 24%. From a quantitative standpoint, buying silver makes for a solid play based on momentum.

An additional metric which I believe is suggestive of higher silver prices in the coming months is the clear seasonality present in the data. 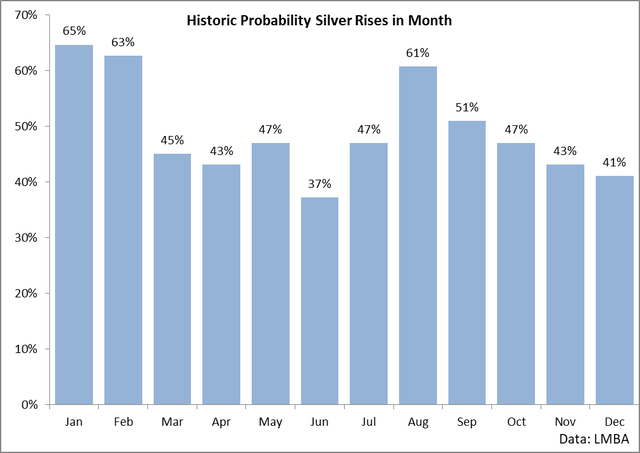 In this chart, I have taken about 50 years of historic data on silver to calculate the odds that any given month increases. What is truly noteworthy is that, in general, the strongest time to buy silver is at the start of the year. For example, across this broad dataset, we have seen silver rally in about 63-65% of all Januaries and Februaries in the data.

I believe this relationship captures the rebalancing effect - investors tend to rebalance their portfolios during certain time periods, and the start of the year is generally a major time in which they reassess holdings. This tends to lead to investors shifting funds into silver at higher rates than other times of the year, which can be seen in the above data.

We can use this data to help time an investment in silver. If you are not comfortable buying SLVP at present, the data would suggest that buying at some time before the start of the year would position us for gains. For example, here's the cumulative return of buying and holding silver during these first two months using data since 1968. 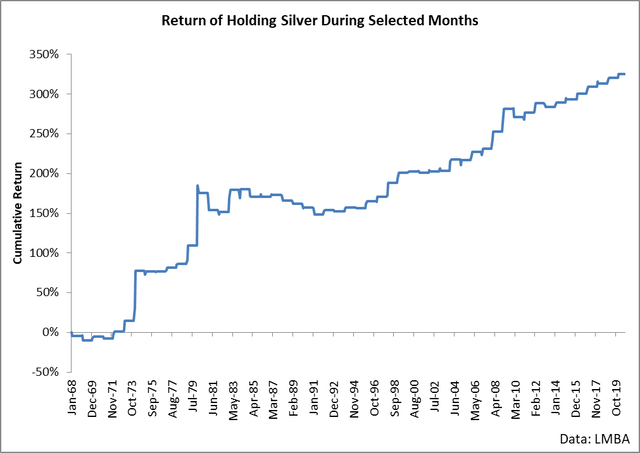 This shows a very clear trend in that the start of the year tends to see uplift in the price of silver. This uplift means that we will likely start the year off on a strong note which will reflect through to SLVP's shares.

Put simply, I believe the data is highly supportive of a trade in SLVP at this time. The earnings of the firms are highly tied to the prices of silver and when silver rallies, SLVP tends to outpace the strength of the gains seen. The data in this section of the article would suggest that we'll likely see silver rally by 20-30% over the next year which has historically translated into fairly strong gains for SLVP holders (with some years seeing shares double). It is a great time to buy silver miners.

SLVP is a silver mining ETF which is somewhat off the beaten path in the ETP space with AUM about 4 times less than its more popular competitor. SLVP's returns are highly correlated and responsive to price appreciation in silver - if silver rallies, SLVP tends to outpace the rally. Silver is likely going to rally over the coming 3-12 months due to momentum and seasonal effects.