The stock will deserve a Bullish rating only if there are signs that Rakuten is able to fend off competition in its core internet service and fintech businesses, and if network roll-out and new subscriber take-up rates for its mobile business turn out to be better than expected.

Readers have the option of trading in Rakuten shares listed either on the Over-The-Counter Bulletin Board/OTCBB as ADRs with the ticker RKUNY, or on the Tokyo Stock Exchange with the ticker 4755:JP. For those shares listed as ADRs on the OTCBB, note that liquidity is low and bid/ask spreads are wide.

For those shares listed in Japan, there are limited risks associated with buying or selling the shares in terms of trade execution given that the Tokyo Stock Exchange is one of the major stock exchanges that's internationally recognized and there's sufficient trading liquidity. Average daily trading value for the past three months exceeds $100 million, and market capitalization is above $14.7 billion, which is comparable to the majority of stocks traded on the US stock exchanges.

Established in February 1997 and listed in Japan in April 2000, Rakuten refers to itself as a "leader in internet services" which provides "services in e-commerce, fintech, digital content and communications" in its media releases. The company is best known for operating Rakuten Ichiba, Japan's largest internet shopping mall. Rakuten generated approximately 57%, 35% and 8% of its revenue from its internet services, fintech and mobile business segments, respectively, in FY 2019. Excluding the loss-making mobile business, the internet services and fintech segments accounted for 57% and 43% of Rakuten's FY 2019 operating profit, respectively. 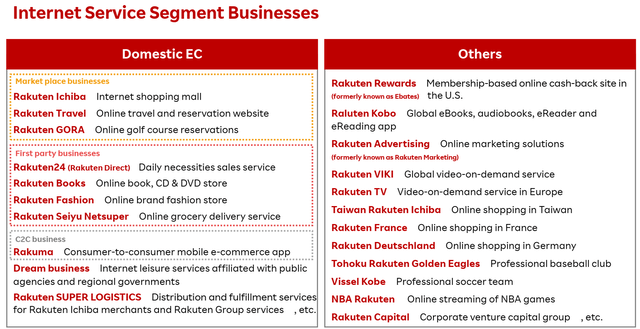 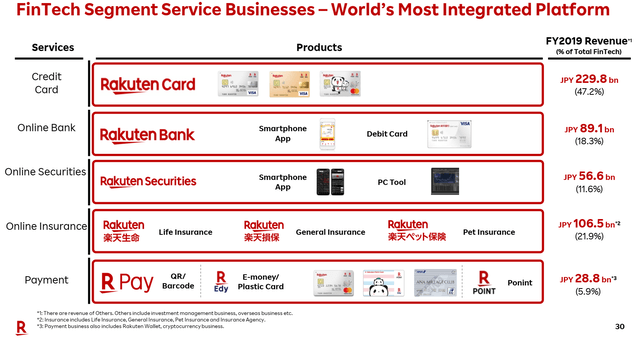 At the company's 2Q FY 2021 earnings call on October 30, 2020, Z Holdings highlighted that there are two key areas of focus with regards to the integration between LINE Corporation and Z Holdings post-merger. The first is to "collaborate amongst the people so that we can come up with one team", and the second is "the multitude of services that we have and how we can integrate and enjoy the synergetic impact of the integration." It is noteworthy that Z Holdings also reiterated its goal of becoming "#1 in e-Commerce" in Japan in the "early 2020s" at the recent 2Q FY 2021 results briefing.

The New Z Holdings, backed by SoftBank Group and Naver Corporation, will own both the largest mobile messaging platform in Japan (LINE) and the country's leading search engine and internet portal (Yahoo Japan) as a single entity. There are a number of ways that the New Z Holdings could pose a bigger threat to Rakuten's core internet service and fintech businesses.

One example is in the area of payment services. There are approximately 46 million Rakuten Pay users as of December 31, 2019. PayPay (a joint venture between Yahoo Japan and SoftBank) and LINE Corporation's LINE Pay have around 19 million and 37 million registered users, respectively. If PayPay and LINE Pay either merge or enter into some form of collaboration, their combined user base will be larger than that of Rakuten Pay. According to Rakuten's corporate website, Rakuten Pay was "introduced in 2012 for primarily small and medium-sized businesses (SMEs) who did not have a point of sale system" and "enables easy credit card payments (pay in store) at a low cost to merchants using the consumers' mobile device." The smartphone app for Rakuten Pay was introduced subsequently in 2016.

Last but not least, there could be significant cross-selling opportunities for Z Holdings and LINE Corporation to expand the New Z Holdings' presence and market share in the various internet service and fintech businesses it operates in. This is largely because the user bases of Z Holdings and LINE Corporation do not overlap that much. Z Holdings' users are mainly older PC-based internet users who use the company's Yahoo Japan portal, while the majority of LINE Corporation's users are younger Japanese who use the mobile LINE app. For example, Rakuten Ichiba's status as "the biggest online marketplace in Japan" with in excess of 50,000 merchants and over 270 million products as of June 30, 2020, could potentially be challenged by Z Holdings' Yahoo Japan cross-selling its e-commerce services to LINE Corporation's younger mobile-savvy user base.

The Japanese mobile services market is dominated by the three major players, KDDI Corporation (OTCPK:KDDIF) [9433:JP], NTT Docomo (OTCPK:DCMYY) (OTCPK:NTDMF) [9437:JP], and SoftBank Corporation (OTCPK:SOBKY) [9434:JP], a subsidiary of SoftBank Group. Rakuten became the new entrant in the mobile market in Japan with a full-scale commercial launch of its mobile services in April 2020.

There are a number of reasons why I am negative on Rakuten's entry into the Japanese mobile services market.

Secondly, Rakuten has signed a roaming services agreement with KDDI Corporation. On the positive side of things, this could help to partially make up for Rakuten's limited network coverage highlighted above. On the negative side of things, Rakuten is heavily reliant on the roaming services agreement with KDDI Corporation for network coverage in the other key Japanese cities, and significant roaming fees paid to KDDI Corporation means that Rakuten's mobile business will take an even longer time to break even. Notably, Marc Einstein, chief analyst at Japan-based research company ITR, was quoted in an interview as saying that "the big winner in Japan having a fourth operator will be KDDI, as it reportedly is making a killing on the roaming deal."

Thirdly, any pricing advantage that Rakuten's mobile business has could be eventually nullified. Earlier, it was reported in local media that Japan's new prime minister Yoshihide Suga wants lower mobile charges in the country, and communications minister Ryota Takeda has mentioned that a reduction in mobile charges of 10% or more going forward is possible. With the existing mobile players in Japan being compelled to cut mobile service charges, especially for their budget brands (e.g. KDDI Corporation's UQ Mobile), it is more challenging for new entrant Rakuten to grab market share by offering cheaper mobile plans.

The key risk factors for Rakuten are stiffer-than-expected competition for its core internet service and fintech businesses following the merger between Z Holdings and LINE Corporation, and the new mobile services business performing below market expectations in terms of network roll-out and new subscriber take-up rates.

Note that readers who choose to trade in Rakuten shares listed as ADRs on the OTCBB (rather than shares listed in Japan) could potentially suffer from lower liquidity and wider bid/ask spreads.