Dunkin’ Brands Group (NASDAQ:DNKN) has become the second-largest global beverage chain after Starbucks (SBUX). The company rebranded itself in 2019 to Dunkin’, focusing on selling coffee and other beverages instead of donuts. The transformation made sense as consumers move away from unhealthy foods. Dunkin’ was impacted along with other restaurant chains in the initial stages of the COVID-19 pandemic. But the company has seemingly navigated COVID-19 well and after a downturn in comparable sales returned to growth in the U.S. Further, Dunkin’ is now being acquired at a premium. The stock is trading at an elevated valuation and unlikely to have another bidder. I view the stock as a sell at the current valuation. 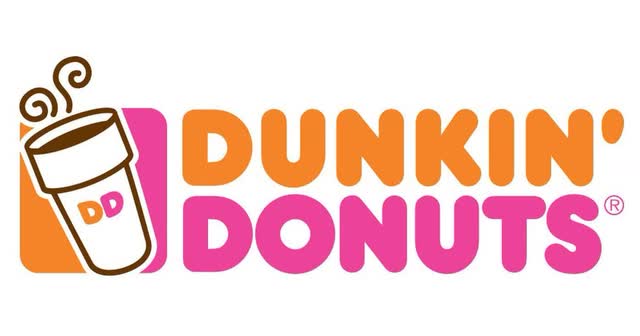 Dunkin’ Brands Group, Inc. is a leading global quick service restaurant focusing on coffee and ice cream. The company has two brand segments – Dunkin’ and Baskin-Robbins – and three operating segments that are Dunkin U.S. (78% of revenue), Baskin-Robbins U.S. (6% of revenue), and International (16% of revenue). There are approximately 9,500+ U.S. and 3,500+ International Dunkin’ stores and 2,500+ U.S. and 5,400+ International Baskin-Robbins stores. The Dunkin’ stores sell hot and cold coffee, donuts, and other baked food. Baskin-Robbins sells ice cream. Dunkin’ also licenses its brand for products sold in retail outlets, such as K-Cup pods and ready-to-drink coffees. The company operates a 100% franchise business model. In 2019, companywide revenue was ~$1.37B and systemwide sales were over $12.1B.

Dunkin’ Is Being Taken Private

On October 26, 2020, Dunkin’ announced that it was in merger talks with Inspire Brands after rumors began to surface a few days before. Inspire Brands is the owner of over 11,000 Arby’s, Buffalo Wild Wings, SONIC, and Jimmy Johns. On October 30, 2020, Dunkin’ announced that it agreed to be acquired for $8.76 billion in cash or $106.50 per share. The deal is approximately $11.3 billion inclusive of Dunkin’s net debt (total debt – cash at end of Q3 2020). The deal has been approved by both boards and is expected to be completed by end of 2020 subject to approvals. Inspire will become one of the largest quick service restaurant companies in the U.S. and expand its global footprint.

The purchase price is a bit over 2.5X the price of the stock during the 52-week low of just under $40 per share in March 2020. The stock price had declined significantly during the depths of the market downturn when the impact of the COVID-19 pandemic became apparent. The takeout price is about a 20% premium based on the last closing price before the announcement.

The Impact of COVID-19

Initially, Dunkin’ was adversely affected by COVID-19 due to local government restrictions and changes in consumer behavior caused by teleworking. In the U.S., comparable store sales declined in the end of the first quarter and into the second quarter before reversing. Gradual lifting of restrictions and reopening of closed stores reversed trends. In addition, Dunkin’ responded by closing stores with lower profitability, changing the menu, and focusing on digital initiatives. The company closed 553 low volume and underperforming stores globally. The table below shows comparable sales declines and improving trends during COVID-19. Dunkin’ also suspended share repurchases, suspended the dividend, and withdrew guidance.

Although, COVID-19 had an adverse impact on Dunkin’, it is increasingly looking like Dunkin’ is performing relatively well in the current coronavirus pandemic. The company has a franchise business model that allowed it to rapidly close underperforming stores and improve operating margins. Drive-thru locations helped drive sales when consumers are possibly hesitant to enter stores. Notably, third-quarter sales were better than expected and Dunkin’ beat estimates on the basis of growth in the U.S. and lower declines internationally. Dunkin’ even reinstated the dividend by end of the second quarter after suspending it at end of the first quarter.

Seemingly, by Q3 2020, Dunkin’ returned to pre-pandemic sales levels and demonstrated the ability to grow during the pandemic. Additionally, Dunkin’ beat revenue and earnings estimates by a fairly decent margin in Q3 2020. The company’s CEO delivered positive statements:

Our strong third quarter results are a testament to our continued focus on the Dunkin' U.S. Blueprint for Growth and demonstrate that our high-frequency, low-touch, affordable-ticket business performs well in any environment. In response to changing consumer patterns, we moved quickly to adapt our menu, introducing new beverages and snacking items designed to appeal to both morning and afternoon traffic, as well as younger consumers. We also doubled down on digital, leveraging the strength of our assets to give customers an even faster, frictionless experience. All of which contributed to our Dunkin' U.S. comparable store sales growth of 0.9 percent.

Another Bid Is Unlikely

The performance of Dunkin’ during the pandemic and the positive third-quarter performance are the likely reasons why Dunkin’ received decent premium in current market conditions. Some other quick service and fast casual restaurant chains were sold when in distress or after declaring bankruptcy during the pandemic leading to low valuations. The market is currently pricing Dunkin’ at $106.45 per share or near the acquisition price.

Another bid is possible but unlikely for a few reasons. Dunkin’ was already trading near a 52-week and all-time high before the offer. The stock is now trading at an elevated valuation of nearly 38X forward earnings. This is higher than almost all of Dunkin’s peers including Starbucks at 37X. Other major players in the coffee space include privately held JAB Holdings, the majority owner of Keurig Dr Pepper (KDP). The company owns and controls brands such as Peet’s, Caribou Coffee, and others. But high leverage and gaining approvals in an increasingly consolidating market may prove difficult. Starbucks, which could also be a buyer, has not shown any past inclination to buy other coffee brands focusing on growth of its core brand. Restaurant Brands International (QSR) is another possible acquirer since it owns Tim Horton’s. But this company also has high leverage, and its coffee operations are predominantly in Canada likely limiting interest. Lastly, the deal has a fairly high termination fee of $268 million if Dunkin’s board changes its recommendation or $469 million if Inspire backs out of the deal.

The stock is trading near the acquisition price. Dunkin’ is priced at a premium valuation and is not trading on fundamentals due to the impending acquisition. It is unlikely that another bidder will emerge, and the deal is expected to close by year end. Investors should probably lock in profits at this point.

If you would like notifications as to when my new articles are published, please click the orange button at the top of the page to "Follow" me.

Dividend Power
5.65K Followers
I am a self-taught individual investor and I have been investing in stocks for approximately 20 years. I focus on dividend growth investing with a long-term horizon since I believe in the compounding power of dividend growth investing. I generally look for undervalued large cap stocks with sustainable dividend growth and capital appreciation potential. My second focus is tech and small- or mid-cap stocks with or without dividends for their growth potential. I try to provide a little more in depth analysis weighing the positives and negatives. You can see my performance at my Tip Ranks profile. I am now in the Top 100 out of 13,540 (73rd and in the top 1.0%) financial bloggers (August 2022).You can follow me at my blog Dividend Power. Read my e-book --> 10 Forever Dividend Growth StocksI also now write stock analyses for Sure Dividend as a part-time free lance equity analyst. I provide investment analyses and research for their Sure Analysis Research Database. I also write stock snapshots for Portfolio Insight.

Disclosure: I am/we are long SBUX. I wrote this article myself, and it expresses my own opinions. I am not receiving compensation for it (other than from Seeking Alpha). I have no business relationship with any company whose stock is mentioned in this article.