What a terrible year and what a weird market. I'm coming across such strange anomalies on a regular basis, it's bewildering. One of these is Switchback Energy (NYSE:SBE), is a special purpose acquisition company, or SPAC. This is essentially a cash-backed shell that intends to take companies public without the level of scrutiny and bureaucracy associated with a more traditional IPO. SBE announced its upcoming merger with ChargePoint. Chargepoint is the largest electric-vehicle charging network in North America and Europe.

There's currently a gigantic boom in electric vehicle associated securities going on with poster-children like Nio (NIO), Tesla (TSLA) and Nikola (NKLA). I have short exposure on all of these. I'm not outright short anymore but through option positions that cap risk. 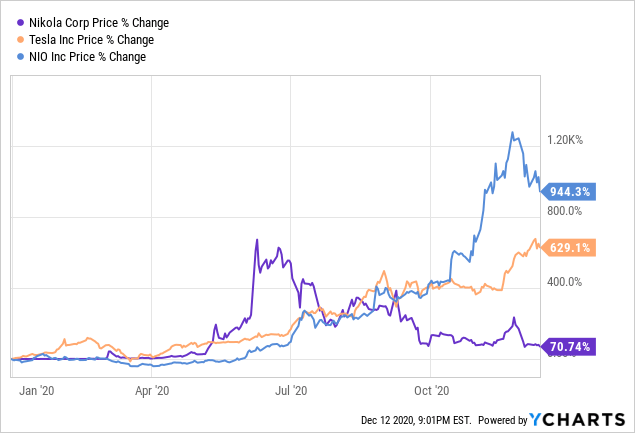 But the enthusiasm extends far and wide beyond these three. It's a very typical bubble in that I think market participants see an electric future (which is likely the correct call). For the first half of the coming decade, automakers are guiding toward releasing another 200 new electric car models. But people then bet this game without regard to the odds laid. Like the sports bettor who phones in his bet to his bookie and takes the bulls regardless of where the line is.

I think there are awesome opportunities out there that allow you to ride this trend with much less risk compared to opportunities as can be found in the suddenly crazy hot SPACs.

SBE is now a $1.5 billion company and it has not even completed its business combination yet. When the $2.4B deal was announced in September 2020, the parties expected to close at the end of Q4.

When the business combination is successful the combined company will be named ChargePoint Holdings and trade on the NYSE. One funny slide from the company's deck is this one where they show growth in terms of the number of ports it has out there. 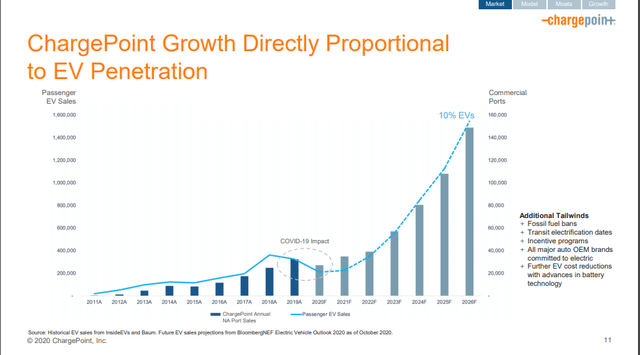 I thought it was funny because so far the numbers are actual data based on reality, The graph isn't that attractive. But from 2021 onward it's parabolic. At least the parabolic ascent has been enumerated. Before the most recent SoftBank move (OTCPK:SFTBY) the company would include parabolic graphs into its presentations without any accountability.

With these SPACs a weird mispricing can become pronounced. I'm not sure about the cause for these mispricings. But at Robinhood traders do not have the ability to buy the warrants.

This has led to the situation where an into-money warrant is $11.30 with the shares at $37.80. The spread between those two securities is almost 15%.

The warrants are described in a warrant agreement and they can have odd terms. I'll highlight some of the key paragraphs that I think can support temporary price differences, although, in my view, not fully explains it.

The warrants are not immediately exercisable, otherwise the price discrepancy would get "arbed" away in a matter of hours, if not minutes:

...A Warrant may be exercised only during the period (the “Exercise Period”) commencing on the later of: (i) the date that is thirty (30) days after the first date on which the Company completes a merger, capital stock exchange, asset acquisition, stock purchase, reorganization or similar business combination, involving the Company and one or more businesses (a “Business Combination”) and (II) the date that is twelve (12) months from the date of the closing of the Offering, and terminating at 5:00 p.m., New York City time on the earlier to occur of: (W) the date that is five (5) years after the date on which the Company completes its initial Business Combination, (X) the liquidation of the Company, (Y) other than with respect to the Private Placement Warrants, the Redemption Date (as defined below) as provided in Section 6.3 hereof, or (Z) the Alternative Redemption Date (as defined below)

...in the event of a redemption (as set forth in Section 6 hereof), each Warrant (other than a Private Placement Warrant in the event of a redemption) not exercised on or before the Expiration Date shall become void, and all rights thereunder and all rights in respect thereof under this Agreement shall cease at 5:00 p.m. New York City time on the Expiration Date...

My understanding of the warrant agreement is that the warrants become exercisable by me, as a holder, only on July 25, 2020.

You have to take care not to miss your right of exercise if the company tries to redeem these. The company also warns it can redeem the warrants even if they are unable to register or qualify the underlying shares.

...If and when the warrants become redeemable by us, we may exercise our redemption right even if we are unable to register or qualify the underlying securities for sale under all applicable state securities laws.

The fact they are currently not exercisable should not stop me from capturing some of the spread between the warrant and the common stock.

6.1 Redemption of Warrants for Cash. Subject to Section 6.5 hereof, not less than all of the outstanding Warrants may be redeemed, at the option of the Company, at any time while they are exercisable and prior to their expiration, at the office of the Warrant Agent, upon notice to the Registered Holders of the Warrants, as described in Section 6.3 below, at the price of $0.01 per Warrant (the “Redemption Price”), provided that the last sales price of the Common Stock reported has been at least $18.00 per share (subject to adjustment in compliance with Section 4 hereof), on each of twenty (20) trading days within the thirty (30) trading-day period ending on the third trading day prior to the date on which notice of the redemption is given and provided that there is an effective registration statement covering the shares of Common Stock issuable upon exercise of the Warrants, and a current prospectus relating thereto, available throughout the 30-day Redemption Period (as defined in Section 6.3 below) or the Company has elected to require the exercise of the Warrants on a “cashless basis” pursuant to subsection 3.3.1.

That redemption can take place if the shares have been trading above $18 for 20 trading days. I'd expect the company to try and redeem under that scenario.

There also needs to be a registration statement but the company does commit to pursuing that within 15 days after the business combination closes.

7.4.1 Registration of the Common Stock. The Company agrees that as soon as practicable, but in no event later than fifteen (15) Business Days after the closing of its initial Business Combination, it shall use its best efforts to file with the Commission a registration statement for the registration, under the Securities Act, of the shares of Common Stock issuable upon exercise of the Warrants. The Company shall use its best efforts to cause the same to become effective and to maintain the effectiveness of such registration statement, and a current prospectus relating thereto, until the expiration of the Warrants in accordance with the provisions of this Agreement.

If there is no registration statement 60 days after the business combination warrant holders have the right to exercise the warrants on a "cashless basis."

One of the reasons the spread likely persists is the high borrow cost. The annualized borrow costs are up to 17% per year on SBE shares. To avoid being on the hook for high borrow costs (potentially rising further) I'm using options to hedge the position.

I have these options trades:

I will have to monitor the position because the calls can get assigned. Especially as the date approaches, the warrants become exercisable draws closer, this will become more likely.

A key risk is that the business combination isn't completed because this potentially threatens to zero-out the warrants while the shares would still be good at $10.

I fully expect this trade idea to get messy along the way. The spread can become wider. Maybe there's something I've missed. The hedge is hard to maintain. But at the end of the day, the spread at ~15% is large enough that I should be able to capture a sweet return, especially given capital invested, here over the next seven months.

I'm sizing it small enough that I don't mind it if this goes against me for a time.

I write the Special Situation Report. I look at special situations like spin-offs, share repurchases, rights offerings and a lot of M&A events. The point is to make money with risks under control. Check it out here. Follow me on Twitter here or reach out through email at dehaas.bram at gmail dot com.

Bram de Haas
17.16K Followers
Author of Special Situation Report
Professional risk-taker focused on smart bets and risk control.
15 years of investing and I feel like a rookie in his first year at the academy. My roots are in the value school but over time I've learned to respect different approaches. I'm interested in what quants do, options traders do, and even what WallStreetBets is doing (keep your friends close and...)

Disclosure: I am/we are long SBEWS. I wrote this article myself, and it expresses my own opinions. I am not receiving compensation for it (other than from Seeking Alpha). I have no business relationship with any company whose stock is mentioned in this article.