Hercules Capital, Inc. (NYSE:HTGC) is a venture lending BDC that focuses on Life Sciences, SAAS Finance, Technology, Sustainable & Renewable ventures, and special situations. A BDC stands for a "Business Development Company," which is a fancy way of describing a quasi-bank that exclusively makes loans to middle-market companies, companies that are too big for small business loans but too small to make offerings on the bond market.

Since inception, HTGC has grown dramatically since 2005, as can be seen below:

Our first question must be: was this growth beneficial or detrimental to shareholders? BDCs by regulation must pay out 90% or more of their earnings lest they face excise taxes on retained earnings, so organic growth is not the primary growth avenue. The primary way by which a BDC grows is by secondary offerings, where (the hope is) that share will be offered at a premium to NAV, which lifts the NAV for the whole shareholder base. This, of course, requires that the market price of the offering be above NAV - hence existing shareholders should root for the share price to be at a premium.

Let's look at this ourselves:

Except for 2008-2010 and early 2020, HTGC has consistently traded at a premium to book value. Notice that share issuance slowed down during market crashes that sent shares trading below book value. Why has the market given HTGC such a large markup? I have two hypotheses:

First Hypothesis: HTGC exhibits an economy of scale. As HTGC's asset book has grown in value, so has its efficiency ratio fallen, which is calculated as non-interest expenses divided by total investment income:

Note that HTGC's efficiency ratio is comparable to that of ARCC, but is nowhere nearly as low (good) as that of MAIN, which is closer to 15%.

Second Hypothesis: admittedly this is not a quantitative one, but rather a qualitative one - HTGC's investments are just sexier - think Tech, SAAS, etc. Here are a few names of companies that HTGC has invested in on its balance sheet in the Q3 2020 10-Q, and the cost of their investments:

Does HTGC produce an unusually high rate of return on its NAV that justifies a premium to book value? The next graph says: "not really." A typical yield on NAV for a BDC is about 10%, and while HTGC has been slightly above 10%, it doesn't spectacularly hit it out of the park here:

Whether HTGC's choices of investment have been good for longtime shareholders will be explored further next.

How about HTGC's historical underwriting? Well, here things get hairier. BDCs can own three types of assets: control (>25% of voting power or control of >50% of the board), affiliate (between and including 5% and 25% of voting power), and neither control nor affiliate. HTGC reports both the fair values and cost basis of their portfolio divided into each of these categories, so let's take a look:

The vast majority of HTGC's investments are in Non-Affiliate/Control Investments. Also notable is that in 2009 and 2010, HTGC went significantly into cash, possibly because of cautiousness or a lack of opportunities. But how did these investments fare? 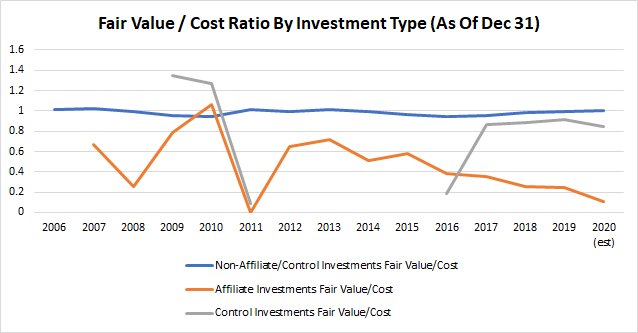 Here we can see that Non-Affiliate/Control investments are the meat & potatoes of HTGC's business. But in terms of control investments & affiliate investments, HTGC has been a value destroyer. Why? I don't know. But I would encourage HTGC to stick with what they know best: non-affiliate/control investments, and just let the ventures do their own thing. Next, let's look at net realized/unrealized gains (losses) as a fraction of net asset value:

NAV/Share dropped only from ~$10.30 to $10.26, barely any cumulative movement at all. So why is this happening? Remember that HTGC's shares tend to trade at about 30% higher than book value. This means that new share offerings have tended to support the NAV/share figures of HTGC. This means that new shareholders are subsidizing the losses of the old ones. While HTGC can continue to grow and issue new shares, this equilibrium can continue, but understand that this is not sustainable. HTGC must inevitably slow down its rate of growth, and when that happens NAV will inexorably begin a protracted, but very slow, decline.

Since holders of BDCs are running small(er) business credit risk, it is not a good idea to hold them naked, unless you can tolerate some wild swings in the share prices. It's best to hold HTGC with some hedge for credit risk, such as TLT, long-term treasuries:

An additional hedge could be gold, in the form of GLD. Just like with my other recent articles about BDCs, let's simulate a 60/30/10 allocation of HTGC, TLT, and GLD (portfolio 1) and a 100% HTGC allocation (portfolio 2) using portfoliovisualizer.com: 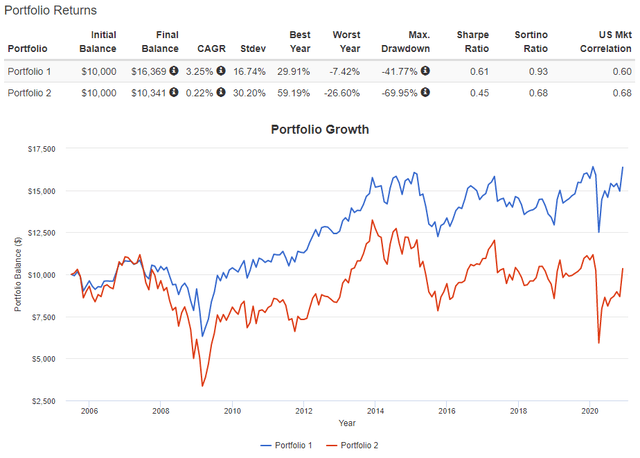 As you can see, including the bond and gold allocation helped dampen the portfolio volatility somewhat and also helped provide for some growth of principal over those years. Finally, let's look at the income stream in the next graph. As it turns out, including some lower-yielding bonds didn't make that big of a difference in the long-run income stream. 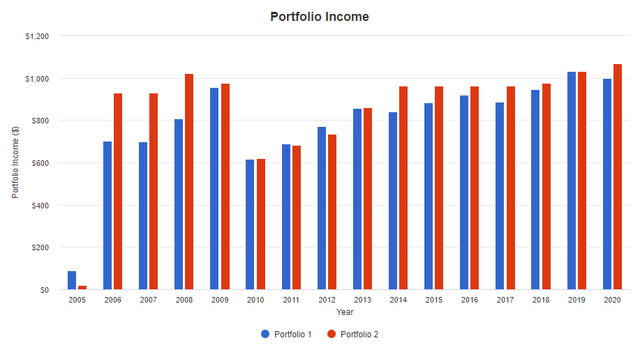 Given this past history, how should we approach investing in HTGC?

HTGC currently should have a place in an income investor's portfolio, but at a modest place. Whether it deserves an outsized allocation depends entirely on whether management can deliver on points 1 and 2.

Stephen Nemo
1.11K Followers
I am a freelance analyst, mostly writing about convenience retail, pipelines, natural gas E&P, and BDCs. I am currently focusing on building a portfolio of thoroughly researched income investments.

Disclosure: I am/we are long HTGC. I wrote this article myself, and it expresses my own opinions. I am not receiving compensation for it (other than from Seeking Alpha). I have no business relationship with any company whose stock is mentioned in this article.