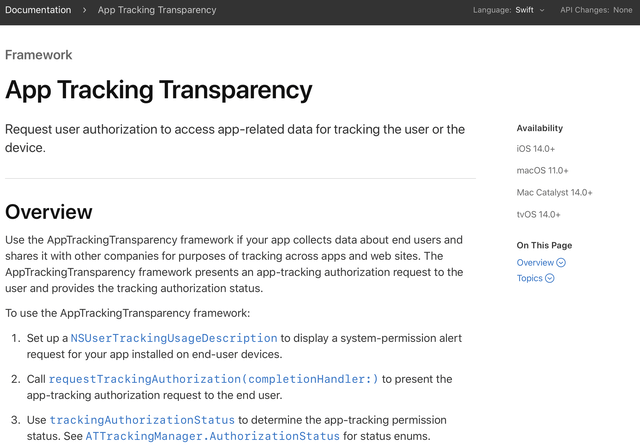 When I last wrote about the Privacy Wars back in May 2019, tensions were at a simmer. For the most part, Apple (AAPL) and Facebook (FB) were still sub-tweeting each other, being very careful to make their positions known, without drawing blood. I called it “The Lukewarm War.”

After Wednesday's revelation that Facebook is aiding Epic Games in their case against the Apple App Store, it is now in the open, and we are into hand-to-hand combat.

The big issues Facebook has are two changes to the way apps work on iOS that were announced at WWDC in June:

Already the Privacy Labels are live. Facebook’s is 12 screens long. Here’s a movie of me scrolling through it.

Facebook does not appreciate that its users may learn all this, and that some may object to the vacuuming of their data.

But it’s the second change that is even more threatening. The likelihood is that very few users will actually go through that very long list in the iOS app store and become alarmed enough to delete the app. Once the second change goes into effect, the next Facebook app update will be required to ask for permission to track on next launch, much in the same way apps are required to ask permission to use location, camera, microphone, etc.

The default answer for almost everyone will be “no” every time they are asked by an app. This is a direct threat to the Facebook business model.

So on Wednesday, we get a double-barreled attack From Facebook. The first was this full page ad in the Wall Street Journal, New York Times, and Washington Post print editions. 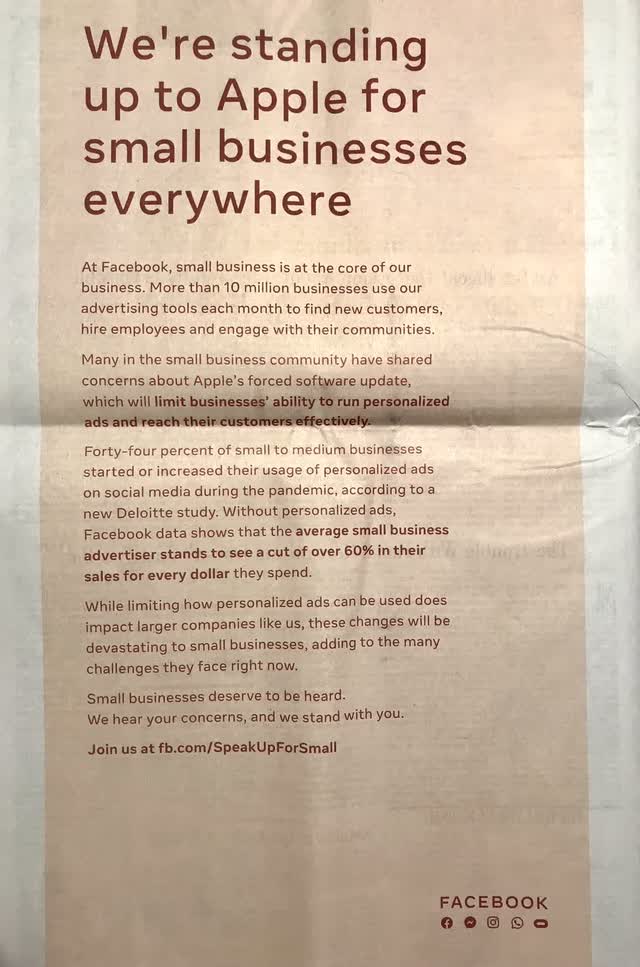 Facebook's whole service is designed for users to willingly tell the company everything important about themselves. Without ever having to collect a single bit of data sub-rosa, Facebook gets users’ names, phone numbers, where they live, what products and services they like, what music/TV/movies/books they like, what their hobbies are, what kind of work they do, what kind of food they like, etc. I could keep going, but the point is that Facebook knows so much of what is relevant about all their users, ad-targeting should not be difficult, especially when combined with other public and proprietary data sets they have. They are worried their ads will be marginally less effective, and that will cut into profits. They are right, but it is hardly the disaster for small businesses they want us to believe.

What they are not saying is that the real threat is to the growth of the algorithm in the long-term. Facebook has become accustomed to training its algorithm with the most comprehensive personal data set in the world, only rivaled by Google’s (GOOGL). What they cannot say is that if this data set becomes less comprehensive because of Apple’s move, over time the algorithm will not be as good as it could have been otherwise, and that is a real threat to Facebook’s long-term competitiveness.

So we get Facebook using small businesses as a human shield to fight this war against a foe with more ammo. But that is just more PR, and metaphorically a slap in the face with kid gloves. Joining the Epic suit is a shot fired. Along with the ad, Facebook held a call with reporters where Facebook execs took turns blasting Apple, and also revealed the Epic news.

There is more irony here. If Epic is successful in its suit against Apple, it will also severely limit Facebook’s leeway in setting terms for the Facebook Platform. These terms are one of the things the FTC is suing Facebook over. They may not have thought that part through.

Apple and Facebook have diametrically opposed business models, and that is at the root of all this. Apple’s model is you pay for everything up front. Their devices are only expensive if you don’t take into account everything you get for the price. One of those things is for Apple not to collect every bit of data they can about you. The single principle that underlies all their privacy initiatives is data minimization — limiting what they collect, and what third-parties can collect.

If you want a more complete explanation of how Apple views this, SVP of Software, Craig Federighi just gave a keynote and the European Data Protection and Privacy Virtual Conference. I’ve embedded it above, but this was a week before Facebook’s broadside, and Federighi was still sub-tweeting:

Of course, some advertisers and tech companies would prefer that ATT [App Tracking Transparency] is never implemented at all. When invasive tracking is your business model, you tend not to welcome transparency and customer choice.

“Some tech companies” is of course Facebook and Google.

Facebook’s model, the same as most internet services, is “free.” You don’t pay money to Facebook, you pay with your attention, but more importantly your data, which Facebook has more of than anyone when we talk about personal information. People willingly hand it over without asking to be compensated. They also combine it with other data sets that are public, or that they pay for. This is the big differentiator between Facebook’s ad model, and the long-standing ad models of older “free” media like broadcast TV. Unless you are a Nielsen household, for which people are paid, the broadcast networks get no data when you watch TV over public airwaves.

Since the beginning of the iTunes Store, broadcast networks have been more than happy to provide their programming without ads if the customer preferred to pay with money instead of attention. But all these years into it, Facebook has shown no interest in offering a paid, ad-and-tracker-free version of their services. I think at this point the reasons are clear:

So in a way, this moment was inevitable. Facebook needs to be on iPhone, and iPhone needs the Facebook app in the App Store to be relevant to many customers. So they have to live with each other, but the wide gulf in their business models ultimately is driving this.

Every tech company with a large market cap has risk in one way or another.

Me, less than a week ago

This donnybrook covers two big parts of that risk:

The tension on the first one is that the entire internet economy is undergirded by data collection. Even most services you pay for with money are collecting massive amounts of data on you. If they can become more efficient as a result, they can keep prices low and scale, collecting even more data.

But ultimately, this is not a question of finance, but a social and political question. This is going to be decided in Congress. There is an overwhelming desire on both sides of the aisle to “do something about Big Tech.” Right now, no one can agree what that something is, but this issue will most certainly be part of it when they can agree.

I have thought for years that Apple is skating to where the puck is here, and companies like Facebook and Google will eventually find themselves partly deprived of their now unfettered flow of data. Either way, this will not be decided any time soon.

The second part is more of a legal question, and that will take many years to wind its way through the courts. Apple’s lawyers will make it go as slow as possible, and in the end, the tech landscape may have changed to the extent that the case is beside the point.

So as much fireworks as there are right now, the companies are fighting over the future, not the present. Until then, it is business as usual for everyone.