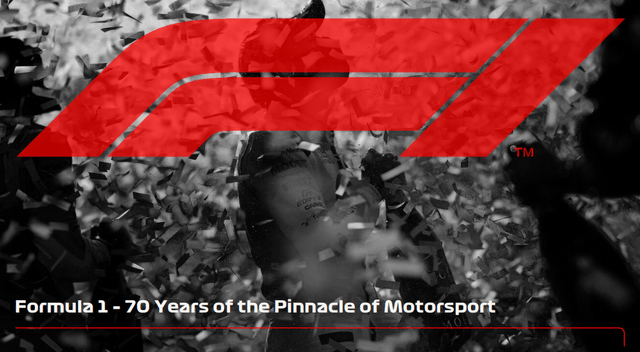 Live sporting events haven’t exactly been winners in 2020. For obvious reasons, sports as we knew them prior to 2020 ceased to exist. Many sports were shut down entirely, forgoing play altogether. Some were played in limited capacities, and just about all of them were played with very little to no fans in the stands. It’s a far cry from what we knew before COVID-19 became an unpleasant addition to our vernacular.

Shares of companies that are leveraged to live sporting events were obviously crushed, and for good reason; nobody knew at the time whether or not they could survive the enormous macro headwinds being thrown at them. Some have coped better than others, with one example being Formula One (NASDAQ:FWONK). 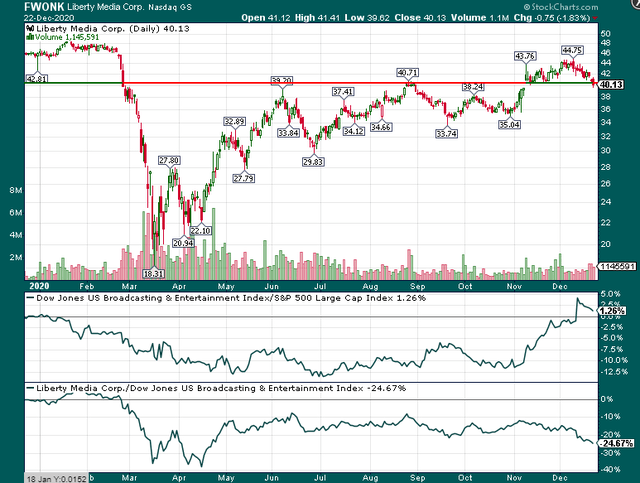 FWONK fell by more than half in the space of a couple of weeks earlier this year as the season that was set to begin in March didn’t actually begin until the summer. Races were largely run without fans in 2020, and the ones that did have fans hosted just a tiny fraction of normal volume. Still, Formula One has shown enormous resilience, and I think with the new Concorde Agreement in place, which limits the amount of spending each team can do, the company is well-positioned for the next few years.

The stock is also trading down to what should be strong support after a recent pullback from its relative high. The $40 area was the spot where two prior rallies fizzled out, and then became gap support following the early-November jump to new relative highs. In short, I think now is the time to buy FWONK as the long-term fundamentals should be positive, and the stock has pulled back nicely into support.

First, a bit about how Formula One works

Formula One is often referred to as the pinnacle of global motorsport, and in many ways it is. It is the very highest level (of many) in single-seater racing series globally. It commands the largest audience, generates the most revenue for teams, costs the most to run, and pays the most to drivers. It is also a complex business, as we’ll see now. 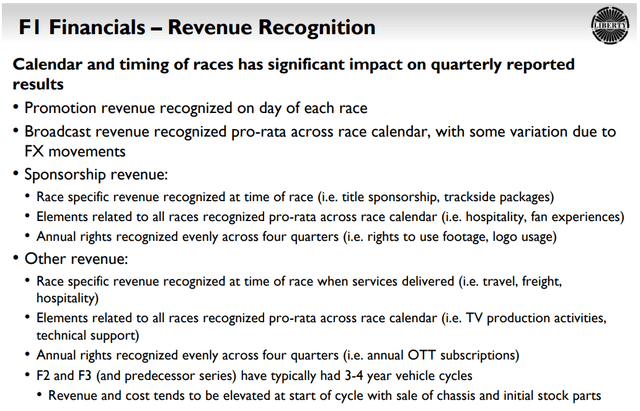 Formula One gets its revenue in a variety of ways. There’s promotion and advertising revenue, fan experiences, ticket sales, hosting fees from countries that host races, and of course, television broadcast revenue. Revenue is recognized over the course of the year and in lumpy bits, so financials can be quite volatile quarter to quarter, and even year to year.

A huge expense for the company is team payments, which it provides in part based upon the prior season’s finishing order in the Constructor’s Championship. This is the reward, if you will, for the teams for their prior year’s work. Teams count on it to fund their budgets, so the more Formula One can generate in terms of revenue, the more that gets reinvested back into the sport through the teams.

Formula One also has significant exposure to forex given it derives its revenues and makes payments not only in different currencies, but on different timeframes. 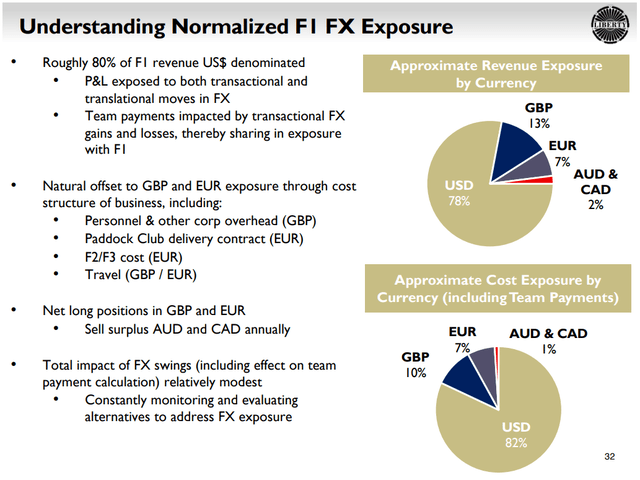 I’ll let you fill in the details with the above slide but in short, Formula One could derive revenue in USD in August, and then make payments against that revenue to teams in January in GBP. That’s a simplified example, but these movements of funds across currencies and time frames happen all year.

Companies that operate with volatile revenue and expenses generally turn me off from their stocks. After all, with so many companies that have fairly predictable revenue and earnings, this extra complication is a negative. However, I see Formula One as being on a path to much higher revenue over time, and therefore, a higher share price. 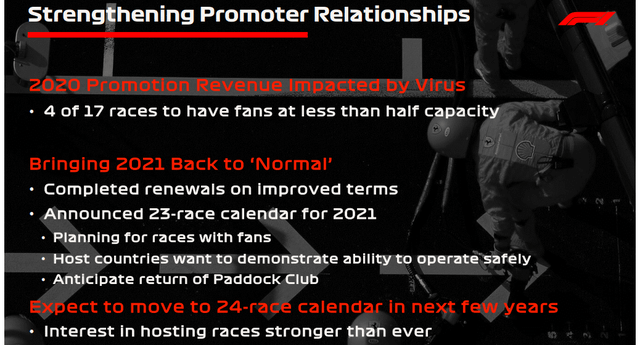 To begin, we should see a return to a normal calendar for 2021. That means not only the full slate of races (we only got 17 races in 2020), but a return of fans. Formula One has been working since early in 2020 on making sure as many fans as possible can attend Formula One weekends. It is in everyone’s interest for this to come to fruition, so I believe it will.

The sport continues to see very strong interest in hosting events, with new venues that were on the calendar for 2020 expected to debut in 2021 or later, in addition to old favorites. In short, there seems to be more demand for Formula One events than there is supply. That leads to pricing power for any business, and I do not see why Formula One should be different. 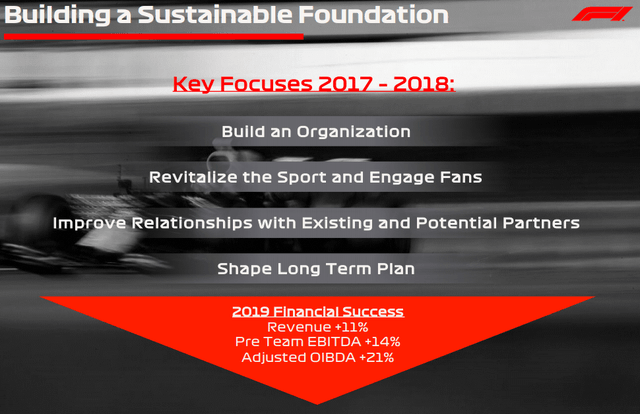 Indeed, we saw some of that strength last year, before COVID-19, when revenue was up 11%, and operating earnings rose by 14%+, depending upon which metric one uses. While I don’t necessarily think 11% revenue growth is sustainable longer-term, I do see mid-single digits as a base case, with the possibility of stronger moves in certain years.

Some skeptics have pointed out that with the world’s apparent desire to move to all-electric vehicles, Formula One could be relegated to the dustbin of motorsport history. However, this year was Formula One’s 70th World Championship, a period that has seen numerous and seismic shifts in personal transport. The sport has endured and thrived through it all, continuing to prove why it is the pinnacle of motorsport. 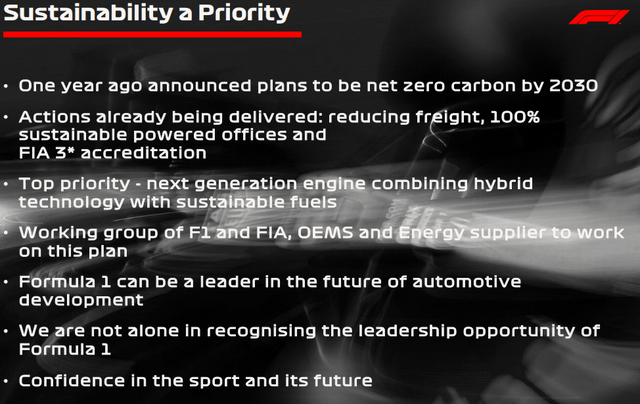 Management is also quite serious about maintaining this position in the market, and the title sponsorships the sport attracts prove that even automotive manufacturers want to be associated with Formula One. The sport uses the most efficient internal combustion engine that has ever been created, which is just one way Formula One remains relevant 70 years after the first checkered flag.

My preferred metric for valuing the stock is price to sales, as earnings are quite messy given the way the sport does its accounting, as I covered above. Below, we have revenue estimates for the next few years, as well as the revenue multiple associated with the current price. 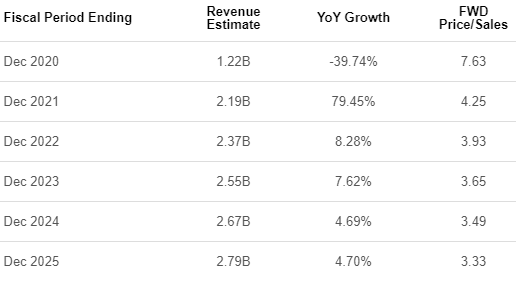 Revenue was decimated this year, but the rebound from a normalized calendar and fan experience should be swift into 2021. I’ll note that a key risk to my bullishness is if we for some reason do not get a normal calendar next year; that will set the bull case back. I see this as a low risk, but it isn’t zero.

The stock traded for ~5.5 times trailing-twelve-months sales prior to the crash, so if we use that as a fair value multiple, the stock should trade into 2022, a year from right now, with a valuation of ~$12 billion ($2.2 billion X 5.5). With the stock’s valuation at $9.4 billion today, that’s ~25% upside in a year. There is a lot that can happen between now and then, but Formula One is adequately discounted for the possibility that the calendar will be disrupted next year. If it is disrupted, damage to the stock should be limited. If we are indeed back to normal, the multiple needs to come way up.

And that’s the opportunity; if you believe, like I do, that Formula One will be back to its old self in 2021, the stock offers good value here. I’m bullish, and I think it is a buy.

Josh Arnold
22.11K Followers
Author of Timely Trader
Maximize your gains through live trading with alerts ahead of market trends

Disclosure: I/we have no positions in any stocks mentioned, but may initiate a long position in FWONK over the next 72 hours. I wrote this article myself, and it expresses my own opinions. I am not receiving compensation for it (other than from Seeking Alpha). I have no business relationship with any company whose stock is mentioned in this article.