My returns on Aflac (NYSE:AFL) since the time of investment have been decent. Not spectacular like in some cases, but decent. This company usually doesn't move in very volatile patterns, with the COVID-19 crash being an obvious exception. Still, thus far, all of my COVID-19 discount calls have been rewarding - and this one is no real exception. 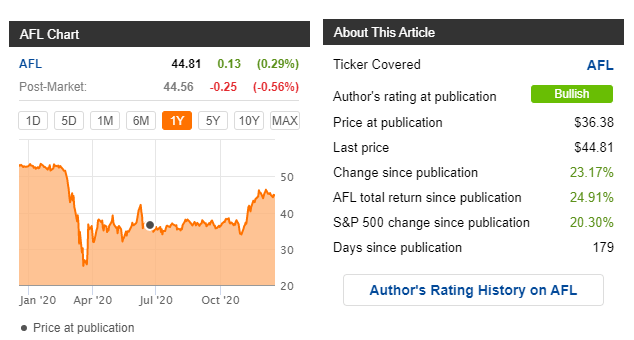 If you recall from my initial article, the company is a 60+ year insurance giant in the field of cancer, accident, disability, illness, dental, vision and life insurance, among other things. The company's primary operating geographies are US and Japan.

Let's see how operations have been going and what we can expect from Aflac going forward.

Aflac - How has the company been doing?

Aflac has been doing well during the pandemic. It may not show from the company's slow rise back to normal valuations, but its approach doesn't materially differ from other companies affected, even in the same field.

Aflac's employees have been allowed to work from home, the company has enhanced benefits not only for employees, but policyholders as well, and has granted zero-interest loans for agents and agencies in the US and Japan. Aflac operations have gone to virtual and digital sales, and the company has seen an uptick in the demand for company sales.

On the operating side of things, things have been going well enough.

On a segment-specific basis, the company saw a decline of around 2.6% YoY on the US side of operations, with a net investment income decrease of 4.4% due to challenging interest rates. Revenues in the US side of operations were down around 1.5%, due to reduced sales in the current environment. On a 9M20 basis, the company's premium income declined only 0.4% - almost flat, and COVID-19 having not normalized yet, the company saw a YoY sales decrease of nearly 36%.

Similar trends can be seen in Aflac Japan, with a 3.3% net premium income drop on a YoY basis, mostly due to some limited-pay products reaching paid-up status. The company's net interest income was actually much better here, with declines in the "flat" region at only 20 bps YoY. The company did see a YoY revenue decline as well, however, and the 9M20 period was 2.6% down YoY.

The company sees a continued favorable operating environment in the medium and long term, however, which is one of the reasons that the company decided to bump the dividend around 18% in November of 2020. While COVID-19 has created an environment that sees the company heavily impacted on many levels, Aflac is meeting these challenges through capital management, a voluntary separation which the company expects will cut the workforce by around 9%, and annual savings of around $50M. The company has reconsidered its approach to product development, investment into distribution platforms, and highly accelerated automation investment/s.

It's also hard to argue with the company's fundamental path for future growth. The company has already proven a more-than-doubling in one of its key markets in Japan, with Cancer and Medical policies... 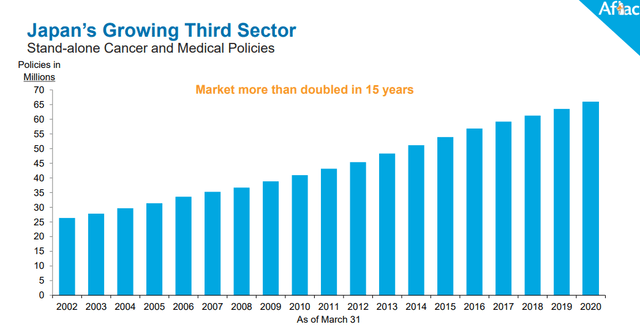 ...and the fundamentals continue to benefit Aflac and its competitors/peers, such as the aging population, social security benefits and similar trends. The company is also selling Aflac-Branded Pet insurance in the US market, potentially cracking open the Japanese market for Trupanion... 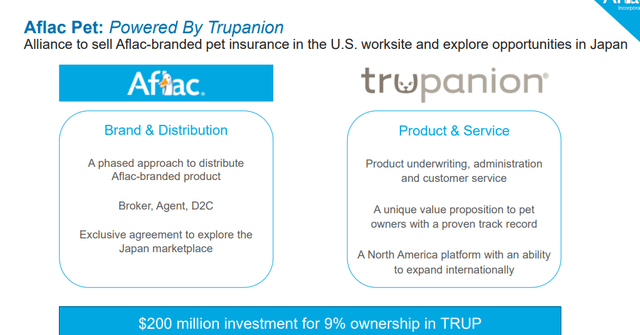 ...and the company's growth and efficiency targets both for the US and Japenese market are, despite COVID-19, mostly on track, with drivers for the company still in effect. In Japan, the drivers for the growth in sales are expected to be a refreshed product lineup and new ecosystem, as well as efficiency measures of a paperless workplace and increased productivity, with the drivers in the US centering around group policies, dental policies, and digital D2C technologies. The company's plan to navigate these has been dubbed "horizons", and the company currently has three, which we can call short-term, medium-term, and long-term. 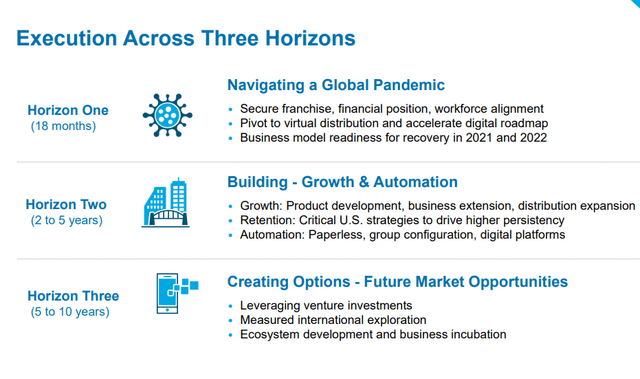 In a way, COVID-19 has been a good environment for the company to introduce many of its future virtual distribution technologies and D2C techniques.

On the liquidity side of things, Aflac continues to have access to one of the better portfolios on the market. The company is A-rated, which gives it easy access to capital, and the LT debt to capital is only 19% at this point. there's really no worrying about Aflac or its position in these respects.

While the pandemic has struck Aflac harder than some of its peers, with many peers actually delivering far better in-pandemic results than Aflac has ben doing, the long-term strength of Aflac is one that I don't find reason to question because of this. The company, like peers, is accelerating towards new methods of doing business, and it's two-pronged market approach into two very mature markets, being very established in both of them, virtually guarantees a very solid future income.

In my first article, made it quite clear that you shouldn't expect massive growth or reversal out of Aflac, at least not in terms of its operating results. It is with that in mind that we move into the company's valuation. 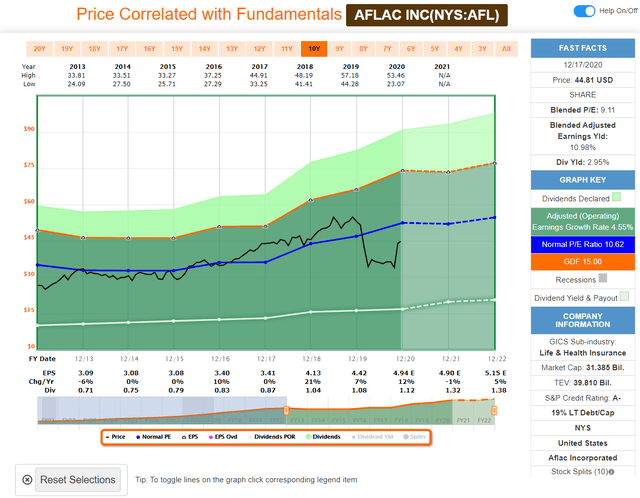 If we look only at Aflac, the company's fall during COVID-19 was massive, but looking at sector-wide valuation trends for financial businesses, Aflac is actually trading at rather decent multiples, when some businesses stil trade around 50% of similar P/E-multiples.

Still, we need to recall that amazing, double-digit growth is not something we expect out of Aflac's earnings trends. 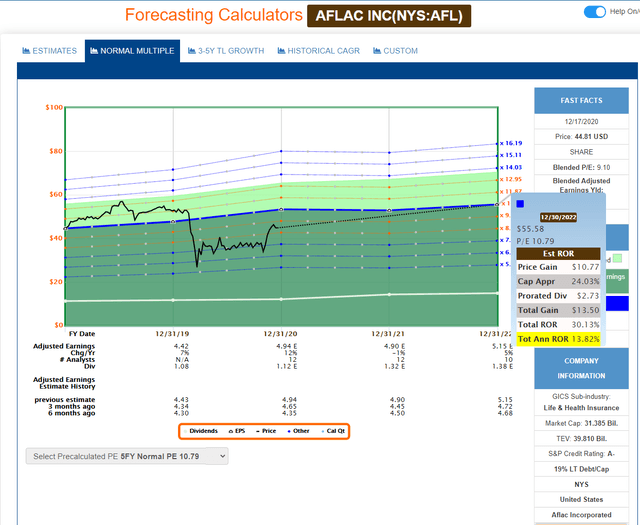 We expect Aflac's earnings to grow around 5% per year until 2022, which marks a 12% YoY growth, in part due to non-recurring effects, followed by a drop and then slight growth. All in all, Aflac's earnings in 2020 will be very similar to the company's earnings in 2022 - and I agree with these expectations, based on likely headwinds and an unchanging interest rate environment for the near future.

However, the argument for Aflac is one of mean reversal. Aflac doesn't typically trade at multiples like these, and I see it likely that we'll at least see a return to a 10.5X P/E or so, which would bring a total return of around 30% until 2022, or nearly 14% per year. This is a far cry from the 25%+ of the COVID-19 crash, but in today's relatively inflated environment, it's enough that it should give you pause given the company's valuation trends and underlying quality.

Aflac is, in my mind, a class-1 dividend stock, with a superb safety rating, sub-35% EPS payout, a high growth rate in terms of dividends... 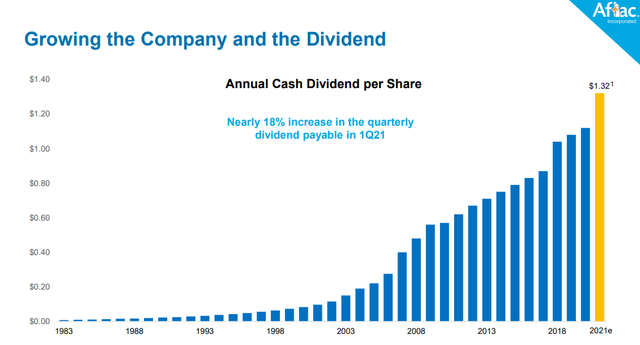 ...and one of the best dividend growth history of 38 years, marking it as a class leader among the ~10 class-1 financial stocks I follow. This is, as I see it, a great company. When you pay a sub-10X earnings multiple for Aflac, you're certainly not putting money at heavy risk, as I see it, you're placing it in a very likely growth position. While not spectacular yields or massive, three-digit annual RoR, it's still quite good at 30% in 2 years (potentially) considering the safety and analyst accuracy we're looking at.

In my article, I noted that Aflac was a relatively low-risk investment. It's not going to make you rich - and that certainly hasn't changed.

But it's an excellent place to stash your cash and watch them, most likely, slowly appreciate while offering acceptable dividends and rates of return in the meantime.

However, what also hasn't changed is that the undervaluation, at around 10-11%, is still very much significant enough to call the company undervalued here. The undervaluation to a conservative 10-11X P/E, or a longer-term price target of around $52/share is still 11.4%. You could even go more conservative than this without really breaking the thesis and still expecting 8-10% rates of return by nearly flat trading in the company for the next few years.

All of this makes Aflac an undervalued "BUY" here.

This article is part of my ambition to write about undervalued dividend companies that I view as "safe" for investment. The purpose of these investments is never staggering amounts of capital appreciation or growth found in some of the more growth-oriented investment strategies - but a market-beating rate of return that combines an appealing, 2-6% dividend yield with a high likelihood of short to mid-term capital appreciation as the undervalued company reverts to a mean - and that is it. 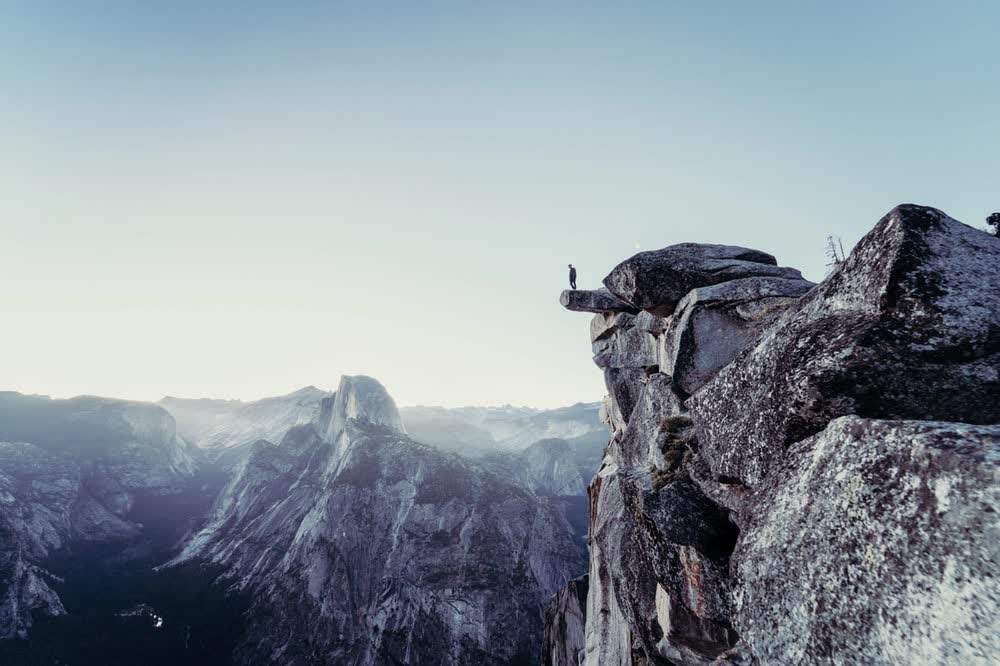 It's my personal view that any investor should initially safeguard their life by first focusing on constructing a fundamentally safe stream of recurring income. Once this is achieved, one can focus on higher rates of capital appreciation which typically are accompanied by higher amounts of risk. My personal failures thus far have been limited to scenarios where I diverge from this logic, thereby putting this fundamental capital at risk. This doesn't mean that I view growth companies as uninvestable - the appeal of the two aren't mutually exclusive, but investors shouldn't mix the two up. When comparing the two, and when considering the target audience for the historically safer and dividend-paying companies, it seems intuitively obvious to me that the safer choice when building the basics of a portfolio is to stick to these companies.

When writing about these companies, I try to pick the most qualitative and secure investments, where a lack of significant downside is more important than a massive upside. The so-called best-of-breed, the best of their kind, the safest around - however you want to label them. I achieve this by picking companies with high credit ratings, good dividend coverage ratios, good historical results, good forecasts, and an appealingly fundamental operating model and market.

Aflac is an excellent way to safeguard your cash in a qualitative company that will still pay you a fairly appealing 3% dividend as you wait for things to get better here. Again, it won't make you rich. I would consider this company suitable either for a very long-term investor looking to place money safely, or a retired investor with above-average levels of capital but with a low risk tolerance, yet still wanting a better-than-bond level of return. Me, I own it for the company's safety and the ability to "ride out" this storm, with part of my capital invested in Aflac's business.

If your risk tolerance and return expectations are similar to my own, at least for some amount of capital, than i would highly recommend you at least take a look at the company to see whether it's something you may want to be a part of.

Mid-thirties DGI investor/senior analyst in private portfolio management for a select number of clients in Sweden. Invests in USA, Canada, Germany, Scandinavia, France, UK, BeNeLux. My aim is to only buy undervalued/fairly valued stocks and to be an authority on value investments as well as related topics.

Disclosure: I am/we are long AFL. I wrote this article myself, and it expresses my own opinions. I am not receiving compensation for it (other than from Seeking Alpha). I have no business relationship with any company whose stock is mentioned in this article.

Additional disclosure: While this article may sound like financial advice, please observe that the author is not a CFA or in any way licensed to give financial advice. It may be structured as such, but it is not financial advice. Investors are required and expected to do their own due diligence and research prior to any investment.