Score Media and Gaming (TSCRF) has multiple catalysts coming in 2021, which may score additional gains for the stock. Currently trading at $2.30 USD on the OTC and $2.92 CAD on the Toronto Stock Exchange, we believe there is still at least 25% upside to the stock.

For Canadian sports enthusiasts, Canadian sports media were comprised of the big 3: TSN, Rogers Sportsnet and theScore. In 2012, Rogers Communications (RCI) purchased theScore with the exception of their digital assets which comprised of different apps and websites. These digital assets are today what is owned by Score Media and Gaming. Their main app, theScore, is the most popular app in Canada and is where the most opportunity exists. 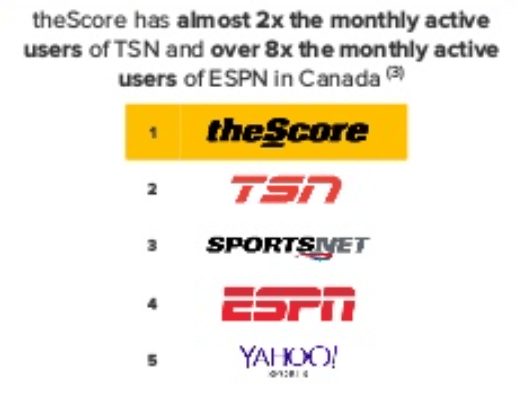 Score Media and Gaming generates revenue through two streams: media/ad sales and gambling. Per their Q1 2021 financial report, currently, their media business comprises ($10.6M) over 100% of their revenues ($8.5M) due to the fact that their gambling revenue is negative due to sales promotions to entice first time gamblers onto their platform. In this article, we will focus in on the gambling revenue and market share potential of the company as new regulations are being introduced in Canada with Bill C-13.

Bill C-13 is a bill introduced that will allow the 10 provinces and three territories to allow for single sports betting. Currently, multiple sport or parlay betting is allowed in Canada. As it exists right now, annually $14.5B is spent on sports gambling in Canada and is broken down as follows:

Bill C-13 hopes to introduce legal competition for the single sport gambling market in Canada to eliminate unregulated/illegal black market gambling and to increase taxation on gambling revenue. While single sports bills have been rejected in the past, the current bill seems poised to approve as it is not a partisan issue. In the past, it was the Liberal party that has blocked attempts to allow single sport betting. This time around, the Liberal party member and Minister of Justice, David Lametti introduced this bill.

Given that the Liberals are a minority government, they will still require support of one of the other parties: Conservative, New Democratic Party or Bloc Quebecois. In the past, these parties all have introduced a similar bill and likely will not stop Bill C-13 from happening. The Canadian House of Commons (where laws are read, debated and passed) returns on January 25th at which they will begin debating the bill. Bill C-13 has already passed the first reading. In Canada, a bill must go through three readings and debates before receiving royal asset to become law.

While the stance on Loto-Quebec and the Western Canada Lottery Corporation is unknown, it is possible that pressure from lost gambling revenue from neighboring states and provinces may persuade them to implement single sports betting as well.

The map below shows the provinces/territory that each gaming corporation is responsible for and which neighboring states have already legalized gaming. 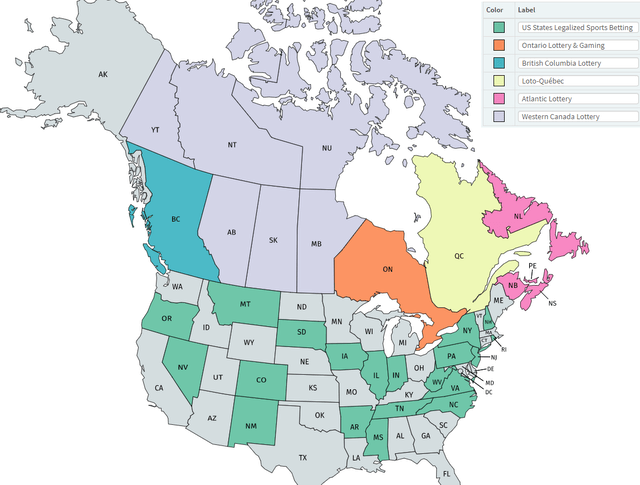 Currently, with a market capitalization of about $1.2B CAD, we believe that the company is undervalued with a 25% upside to $1.5B CAD.

For Canada, we are currently conservative with our estimate that they will have 13% market share of the $5.3B estimated handle per their investor deck. We calculated 13% as this is the current number of Canadian app installs over the total estimated gambling population of Canada. This market share could be understated, as theScore is the most popular sports app in Canada.

Applying an average hold of 7% which was the average in the US since legalization, we land at about $67M of gambling revenue. This may potentially increase if they introduce their app to new states that have legalized sports gambling.

A multiple of 19x P/S was applied to provide an estimated valuation. This metric was the average of comparable sports gambling companies. Understanding that DraftKings (DKNG) may have a premium multiple due to their popularity, we also added Bricks and Mortar companies such as Penn National Gaming (NASDAQ:PENN) which had a much lower P/S valuation to avoid overvaluing. Media revenue was kept at $10M, which was reported for Q1 2021 to be conservative as oppose to annualizing. This is because media revenue fluctuates and is not a reliable revenue stream. 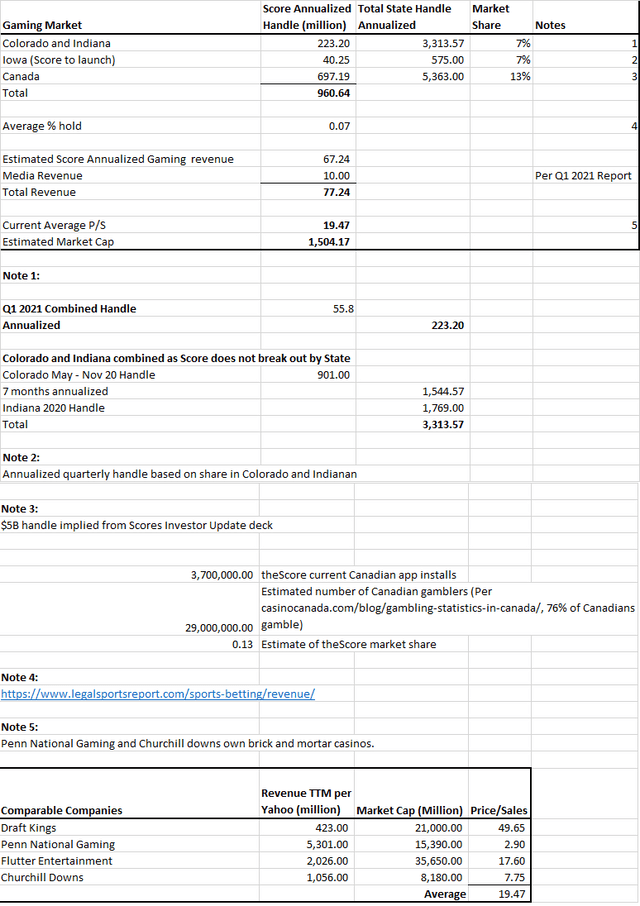 As per their Q1 2021 conference call, they are currently considering to up-list to a US exchange. This is a major deal for a small company as being listed on NASDAQ allows the company's shares to be available to a larger population of investors. Companies on smaller exchanges are sometimes not available on certain trading platforms and some investment firms have strict rules as to what exchanges they can purchase investments from.

As with all investment ideas, there are risks to the thesis. The bear case against investing in this company is as follows:

With Bill C-13 back on the table on January 25 in the House of Commons and the potential for a US up-listing, we believe that Score Media and Gaming has at least a 25% upside to the current share price. Sports Gambling legalization has been a growing trend in North America and Score Media and Gaming looks poised to capitalize on this.

Argaia Capital
351 Followers
As a CPA in training, I filter through the world looking for investment opportunities and financial information to deliver alpha returns. My investment goal is to accumulate enough money for an early retirement where the investment income after tax is sufficient to meet my standard of living. My personal goal is to donate $1,000,000 to charity in my life time by giving 50 percent of my proceeds from articles to work towards this goal.
Follow

Disclosure: I am/we are long TSCRF. I wrote this article myself, and it expresses my own opinions. I am not receiving compensation for it (other than from Seeking Alpha). I have no business relationship with any company whose stock is mentioned in this article.

Additional disclosure: Opinions and views expressed in these articles are based on what we perceive to be reputable sources. In addition, we believe these sources to be accurate and reliable. However, in no way do we represent or guarantee the accuracy thereof, nor the statements made herein. Readers should verify all claims and do their own due diligence before investing in any securities, including those mentioned in the article.

We cannot determine whether the content of any article is appropriate for any specific person. Readers should contact their financial professional to discuss the suitability of any of the strategies or holdings before implementation in their portfolio. Research and information are provided for informational purposes only and are not intended for trading purposes. Never make an investment decision based solely on the information provided in our articles.

Investing in publicly held securities is speculative and involves risk, including the possible loss of principal. Historical returns should not be used as the primary basis for investment decisions.