Apple (NASDAQ:AAPL) reported solid quarterly results on January 27. Still, the market failed to rally around the stock because of the company's lack of guidance. Not much changed for Apple materially, exceeding expectations on the iPhone and other key parts of its business.

There really was not much not to like from the quarter. Earnings were much better than expected, coming at $1.68 per share vs. estimates of $1.41. The better revenue and better earnings should lead to analysts boosting their revenue and earnings estimates for all of fiscal 2021 for the company. This should help with Apple's overall valuation, bringing it lower.

As earnings estimates for this year and next rise, the PE ratio should fall, as long as the stock doesn't rise faster than analysts' adjustments to earnings, helping to make the stock's valuation more manageable and sustainable. Perhaps more importantly, giving the fundamentals a chance or the fundamentals to catch up to the stock's big advance. Currently, the stock trades for around 30 times 2023 earnings estimates, a rather high multiple for Apple on a historical basis. 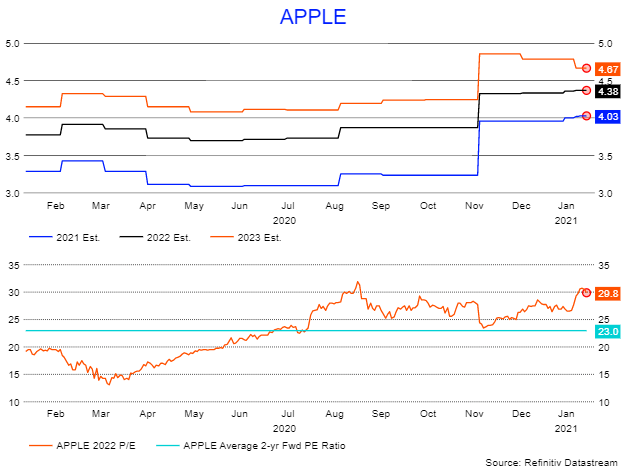 Today, the stock weakness stems from the company not providing guidance again and its lack of clarity around its outlook. This is something the company has chosen not to do since the pandemic has started, and while it hurts the stock around the release of the earnings. Over the past year, the stock's big advance suggests it doesn't have a longer-term impact. Perhaps, it is something Apple should do permanently.

The company's only revenue guidance was that growth would accelerate on a year-over-year basis. However, it also sounds as if they are preparing investors for slower services growth in the March quarter as the unit faces tough comps, while wearable growth will slow versus the fiscal first quarter.

That somewhat negative tone to the March quarter weighs on the stock because service revenue and wearable revenue have been two of the biggest growth drivers for the business for a long time, especially when iPhone revenue growth struggled. The company is telling investors that the growth rate next quarter will not look as strong as it has in the past, which will not help the stock.

Holding On To Support

The stock is still holding on to a key level of support at $138, and as long as that level holds, there's hope the stock can rebound and continue its push way higher, as noted in a previous article. While a break of support at $138, triggering a decline to around $131 and perhaps as low as $124. 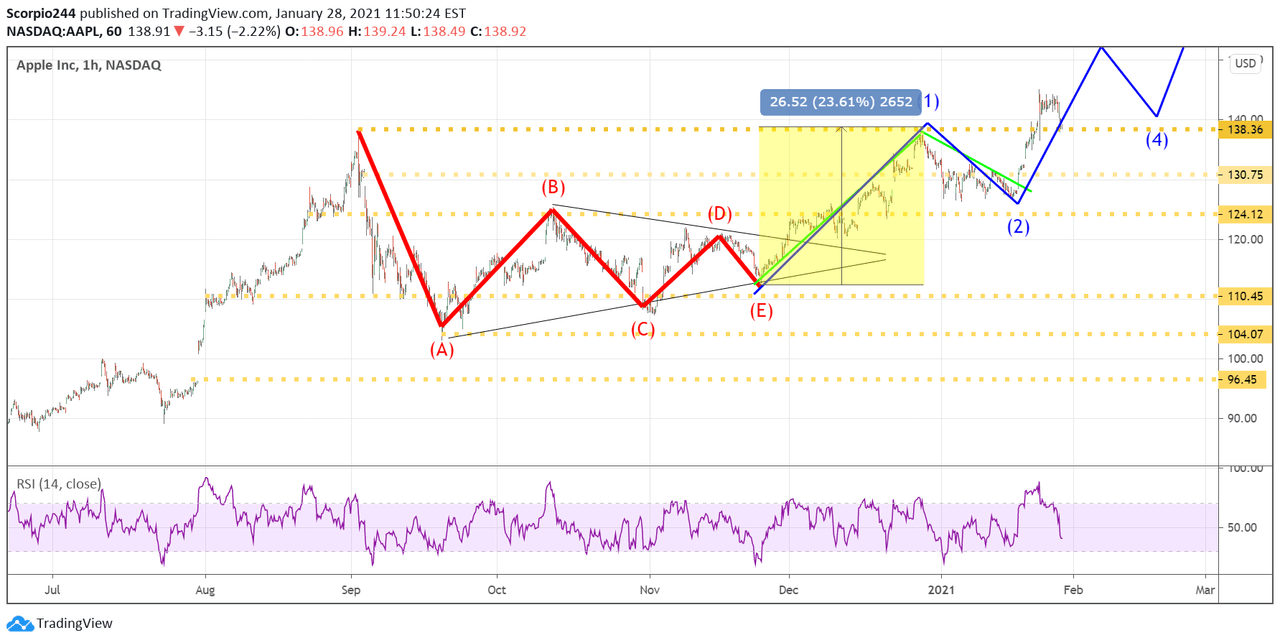 Overall, the company posted amazing results, and it's hard to get to down on a company delivering the results Apple does. It doesn't mean the stock can't fall over the short-term as the market digests the results, and is upset around the lack of guidance.

Love this article? Then hit the follow button at the top of the story!

I have been at this for 25-years and spent 10 of those years as a buy-side equity trader for domestic and international markets. Now, I manage the Mott Capital Thematic Growth portfolio and run Reading The Markets. I use my knowledge as a trader, analyst, and portfolio manager to help update my readers every day on what is driving trading and where indexes, sectors, and stock may be heading, from both a short-term and long-term perspective.